As part of the complete overhaul of his company’s offerings, Ernesto Padilla will be releasing a foursome of new cigars this summer, one of which is the Miami-made Invictus.

Made at El Titan de Bronze, the Padilla Invictus will be rb, each with an initial production of 100 ten-count boxes:

Padilla says that a new batch will be made every two months by a group of six master rollers. When I asked him for further details, he explained it this way:

The first batch will be only 100 boxes of three sizes, all 54 ring gauge: a Robusto, Toro and Torpedo. We will then do a batch that might include a Lancero or Figurado, then the following batch might be a Corona. Get the idea? So 100 top retailers will be selected, then we will announce these are the sizes we plan to make in this small quantity. We then begin to blend to the vitola and start to roll cigars and then age them.

El Titan de Bronze prides themselves on using the entubado rolling method, where the filler leaves are rolled into small tubes and then packed inside the binder leaf. It’s a time consuming process, but one that Padilla believes in as he notes that it affects the taste and helps produce the classic Cuban flavor profile he is looking for. The method is used as a means to help increase air flow and smoke production.

As b mentioned in his review of the Padilla Miami Maduro, which is also being made at El Titan de Bronze, the two cigars share a number of traits including binder, filler, sizes and factory. The Miami Maduro uses a San Andrés wrapper, however, while the Invictus uses an Ecuadorian Habano.

As for the other two new releases, the Padilla Reserve and the Padilla Premier Cru, both are being made by Oliva with the former for the US and the latter for Europe. The Padilla Reserve will be available in Habano and Maduro versions, with Double Toro, Robusto and Toro vitolas offered. 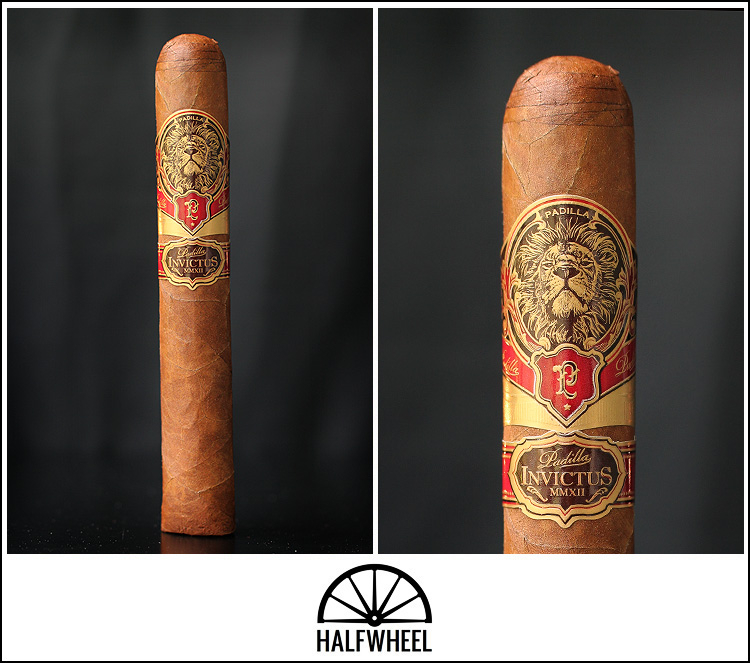 The Padilla Invictus is an attractive cigar; its smooth caramel brown wrapper has just a few small veins and the lion staring back from the band seems to force your eye directly to him. The dual bands are impressive and take up a good amount of space on the cigar, yet their sleek design also gives the Invictus a distinguished and polished look. The cold draw is sweet, laced with graham cracker, honey and a hard candy note. There’s also some earthy, almost mushroom like quality tucked in there. The cold draw was a bit too open for my liking, partially a result of what looked like an underfilled foot. There’s a bit of spice that comes through, making for an enjoyable contrast to the Invictus’ sweet smell.

The first third opens with a good amount of spice wrapped in an doughy textured smoke, giving it a pepper kick that comes as a bit of a surprise, even knowing that it’s an Ecuadorian Habano wrapper with Nicaraguan filler. The spice is the leading note until some dry cedar enters the conversation after about 15 puffs, and sets the tone for how the cigar will progress from here. While the technical performance has been very good so far, the ash strength is the Invictus’ weakness, as it falls off without prompting and breaks up into an ashy mess as it lands. The fairly quick burning Invictus reaches the second third faster than I would have anticipated, largely due to the easy air flow and what seems to be to slow the burn down, though I would be interested to figure out how much the entubado process affects the draw. The flavor profile hasn’t changed much, with a fairly peppery, medium-bodied smoke that fills the palate. By the midpoint the flavors remain largely the same: a combination of some sweetness, some pepper and some dry wood that adds up to an enjoyable flavor that keeps bringing me back to the cigar. 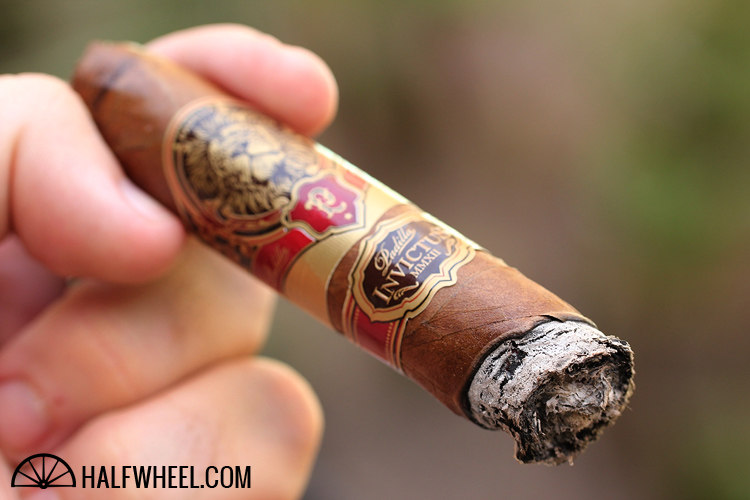 When the final third comes around, the flavors have mellowed, or possibly just gotten a bit more familiar, making it harder to pull out individual notes. There is an ongoing balancing act between sweet and spicy happening, and for my palate it really works. It seems wrong to call it a one-track cigar, but given that the flavor hasn’t really switched directions it’s a fitting description. That being said, it’s a very enjoyable one track as the steady back-and-forth keep the palate from getting bored. The ash continues to be an issue, having landed seemingly everywhere except in the ashtray; a minor annoyance in an otherwise very enjoyable cigar. The flavors continue to coalesce into a level of complexity that gives the Invictus a very pleasing finish that gets taken all the way to the point where it’s simply too hot to continue smoking. It didn’t affect the performance, but it did make it more difficult to stand up for the photos. The other cigar that was shipped with it didn’t have the same thing happen.

The Bottom Line: While the Padilla Invictus doesn’t dethrone the Padilla x Studio Tobac Figurado from last year as my favorite from the company, it does earn a spot in the top five. You’re not going to be taken on a roller coaster ride of flavors with the Invictus, but rather given a steady back-and-forth of sweetness and pepper, an interplay of flavors that is a testament to a well-blended cigar. While the draw could have been a bit firmer and the ash a bit more clingy, there’s nothing stopping the Invictus from being an addition to my humidor when it’s released. The big question that remains is its availability: having blown up the bulk of his portfolio in anticipation of these new releases, and having gone down the route of seeing his cigars discounted by the big online retailers, Padilla may have weakened his ability to get back into the brick-and-mortar retailers he says will be the only ones to carry this.