At the IPCPR trade show in Orlando, FL earlier this year, Victor Vitale brought a host of new releases, one of which was an extension to the Ortsac portfolio, the Ortsac 1962 Habano.

The Cigar Agency’s Ortsac brand is set for another expansion, this time two new lines for its Ortsac 1962 line, both debuting at IPCPR 2012. A Habano and Maduro version are both coming to the Ortasc 1962 line. According to Victor Vitale, both are being made in Honduras at Tabacalera Aguilar and both will receive a Robusto, Toro, 6 x 60 and what Vitale describes as a “first of its kind” 6 x 66. The Habano version is a Nicaraguan puro using Oliva tobaccos, whereas the Maduro will use a San Andrés wrapper over the Nicaraguan fillers.

It should be noted, the wrapper is now listed as Ecuadorian Sun Grown Habano, not Nicaraguan as once stated.

There will be four different vitolas in the Ortsac Habano line when it launches, all in boxes of 20. They are:

But enough of that, lets get down to business, shall we?
*There will be 50,000 total cigars across the four vitolas, numbers for specific vitolas are unavailable.

The Ortsac Habano is a good looking stick, with a great triple cap, although the cigar is a bit spongy when squeezed. There’s a mocha brown wrapper that is smooth to the touch with almost no oil at all present. The cold draw is interesting: cedar, peppermintand more spice on the lips than I was expecting.

The Ortsac starts off the first third immediately with strong spice on the lips and tongue, along with flavors of leather, oak, slightly bitter coffee and a bit of vanilla in the background. The finish is excellent and the retrohale is quite sharp reminding me of a very spicy salsa. The draw is a bit open so far and the burn is a bit wonky overall, but is easily corrected. The overall strength starts out firmly in the medium category — and while I can see it getting stronger — I don’t think it is going to go anywhere very quickly. The finish is excellent as well, one of the best parts of the cigar so far. Coming into the second third of the Ortsac Habano and the profile changes quite a bit with an almost overwhelming note of creamy leather becoming dominant for the majority of the third. It is not a bad flavor by any means, but it is strong enough to crowd out most of the other flavors, although I can still taste notes of oak and coffee every once in a while. There is still quite a bit of pepper noticeable, and the construction evens up nicely through the second third. The strength ends up at just above medium and the smoke production is way above average. 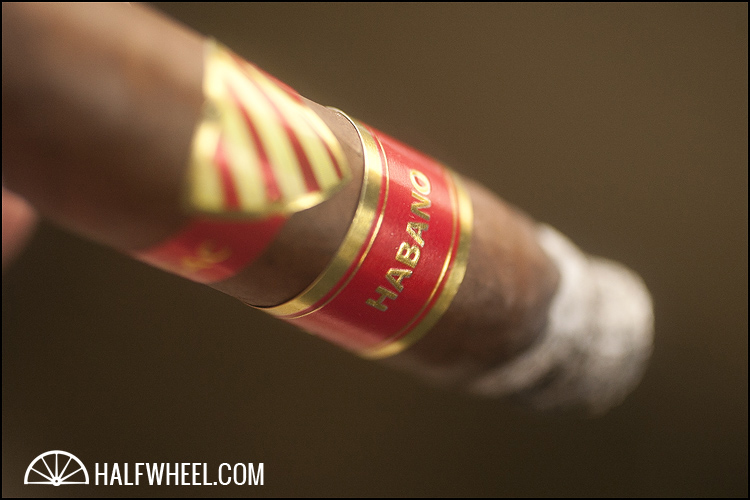 The final third of the Ortsac 1962 Habano does not feature many new flavors, but the strength of the flavors changes quite a bit. The leather from the second third takes a back seat, replaced by a dominant notes of creamy oak and earth. There is slight sweet floral note that comes and goes, but it sadly does not stick around long enough to really impact the profile in any major way. The pepper on the retrohale has only seemed to increase, and is at a noticeably higher level than during the first third. Construction remains good, and the strength ends the cigar at a strong medium. The Bottom Line:  Ortsac is not a cigar I had ever heard of, so I was not sure what to expect. While the profile is not overly complex, the notes it does have are district and easily recognizable, the finish is excellent, and smoke production was copious. The construction was not amazing, but it was not horrible either, and was not bad enough to negatively impact any of the flavors. I enjoyed it enough to get more, as they are a great value at the prices they are selling for, and I think they have a decent chance to age well. Having said that, I really wish the sweetness that I tasted at times would have come a bit more to forefront, as I think it added some nice complexity to the profilewhen it was around at certain points during the smoke.