Last January it was announced that Eddie Ortega had stepped down as president of EOBrands Cigars. It was also announced that he was starting a new brand, Ortega Cigars, which were to be rolled at the My Father Cigar sS.A. in Estelí, Nicaragua. The first line that was released under the new name was the Ortega Serie D. The regular production Serie D line consists of seven sizes coming in both a Mexican San Andrés Maduro wrapper and an Ecuadorian Habano Rosado wrapper.

The sizes are as follows:

As of now, the Lancero is only offered in the Serie D Maduro line. *While there was no MSRP for these cigars since they were part of the Tweetup ticket package, the ticket did cost $120.00, though it included other swag and cigars by various manufacturers. Approximately 1,000 were released at the event.

The wrapper is a beautiful dark chocolate color. It’s a little rough, slightly oily with some visible veins, though that’s not out of the norm for a Mexican San Andrés wrapper. Finishing off the cap is a pigtail, which I always find as a nice touch. There aren’t any soft spots when squeezed. The wrapper gives off a sweet barnyard aroma with minor hints of cocoa and spice. After clipping the cap the cold draw has strong cocoa, more sweet barnyard notes and the slightest touch of spice on the lips.

The first third starts off with some meaty pepper that hits you right in the middle of the tongue, along with some sweet cocoa and an overall earthy profile. The draw is perfect, which isn’t always the case with Lanceros, and has great smoke production. White and light gray ash holds on surprisingly past an inch without any trouble. After an inch and a half the meaty pepper and spice has calmed down a little allowing a more creamy and sweet earthy, cocoa and dark roast coffee bean notes to shine through. An overall creamy and sweet profile that includes cocoa and coffee notes dominating continues into the second third of the Ortega Serie D Lancero. That meaty pepper note persists in the background however, though not nearly as strong as the first third. Interestingly, the ash has started falling off closer to the half inch mark, though I haven’t noticed any other signs of change in construction quality. The earthy profile from earlier has really faded out allowing the cocoa and coffee bean notes to shine brighter as well. 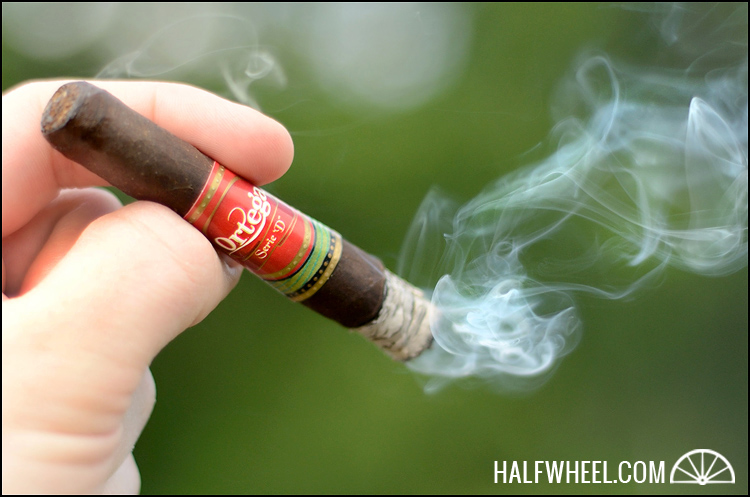 As I head into the final third the earthiness and meaty pepper are just a distant memory. What remains is a wonderfully creamy and sweet profile with cocoa, coffee beans, hints of cedar and a little spice that is absolutely delectable. Throughout the Serie D Maduro I haven’t had to do any touch ups but I finally did need to correct the burn slightly. Strength has built as the cigar progresses and has ended at a solid medium plus, which is a contrast to the constant full bodied profile that has been presented throughout. I've been vocal about my ring gauge preference on halfwheel before, and while I love the Lancero size it doesn't always mean the cigar is better than its larger counterparts. Sometimes they fall short for various reasons, either the blend doesn’t translate as well or the construction is poor, easily being overfilled or under filled as they are more difficult to roll. However, the Serie D Maduro Lancero could not have hit the nail on the head any better. With perfect construction lending to a perfect draw and an absolutely enjoyable flavor profile that developed into a sublime final third, it would easily be one of the cigars I review that quickly get purchased afterwards. Unfortunately, these aren't available to purchase right now, but fortunately for me and Lancero fans everywhere these will be available very soon.