News of a new limited run batch of cigars from Eddie Ortega started to surface on Facebook in late July, just a few weeks before the IPCPR convention and trade show happening in early August. Details remained sketchy some two months after the show as the series evolved, but things are becoming a bit clearer as to their origin and how they will end up on retailers’ shelves.

Ortega says this about the Wild Bunch:

The Wild Bunch was originally slated to be named The Dirty Dozen, but was changed sometime between July 24 and August 26 after a manufacturer contacted Ortega and asked “do you really have to use the word dirty?” That individual’s company had already made a cigar with the word and was fairly fond of it. It was an amicable call, and the series was renamed The Wild Bunch. The dates come from when Ortega first showed off the series on his Facebook page, and the first mention of Dirty Dozen to refer to the project, at least that I could find.

The names and vitolas for the cigars of the first three members of The Wild Bunch have been announced:

A graphic posted by Ortega back on July 24 listed a different secondary names for the next cigar, proclaiming Iron Mike as ‘The Brawler,’ while March’s cigar was slated to be for ‘Wild Bill’ and dubbed the ‘Widow Maker.’ In addition, it listed April’s cigar as ‘Tony the Boss’ with the secondary name ‘AR-10 Killer.’ The name remains on the Wild Bunch poster, so it would be safe to assume that it will be the April release. Also named are what seems to be the remaining members of the Dirty Dozen in order of appearance: Big Bad John will come in 20–count boxes that look somewhat like this: The reason for the changes was pragmatic: Ortega says he didn’t want to wait for new molds to be created. There were no eight inch molds available, and when he used the seven inch molds, “the ends sometimes are worn out… so easier to just go with 6 7/8 and have a little room to play with.” Needless to say, Big Bad John has undergone a few changes since being announced about four months ago.

While the cigars will come out at a rate of one per month, Ortega posted a picture to his Facebook page showing a three-pack sampler that contains one of each of the above mentioned cigars: These samplers will come out before each set is launched, one per quarter.

Final production numbers on these first three cigars were just confirmed by Ortega, with a cap of 500 20-count boxes. Ortega said that production for future characters may go to between 500–1000 boxes, based on orders, putting the total release per Wild Bunch member at 10,000 – 20,000 sticks. He noted that the numbers won’t increase beyond that during the series, and added that it will be hard if not impossible for a retailer to come on board halfway through the releases. Big Bad John is certainly big – an absolute log of a cigar that has a oily sheen and a rich, vibrant brown color that gives you a good idea of what kind of leaves merit the rosado name. There are a some noticeable veins and a bit of toothiness throughout the cigar, but it is quite an impressive specimen. The pre-light aroma has a rich, syrupy sweetness backed by some grain and spice notes, while the cold draw is easy and carries a more muted flavor of dark tea leaves – not so much an earthy note but something that evokes a connotation of something coming from the soil.

A slightly sweet and pleasingly pungent aroma starts to waft off the foot at the beginning of the first third as it is toasted, full of tea-like flavors and showing that same note that was present in the cold draw. Things are fairly subtle in the first inch or so, with a slightly chalky undertone and minimal spice to be found. The ash holds on for about an inch before dropping off into the ashtray – somewhat surprising for such a big cigar but it showed some structural issues fairly early that didn’t lead me to think it would hang on for a significant amount of time. The thick, chalky white smoke continues to billow off the cigar when it’s puffed, with just a bit of dry wood coming through in an otherwise fairly non-descript smoke. There are points in the first third when I’m tempted to compare the flavor to chicken broth, in that it’s not flavorless, just not terribly flavorful. The second third brings about a slight tanginess as the flavor stays fairly medium bodied. The pepper has stayed fairly minimal up to this point, with the tea-like qualities delivering most of the mouth tingles. The aroma of the smoke continues to be very enjoyable, yet it just doesn’t seem to translate to the palate. While the smoke still billows off the cigar, flavors remain fairly tame. The pepper seems to build around the midpoint, reinforced by a bit of eye irritation from the smoke that wasn’t noticeable earlier. While the burn line and combustion of the cigar are spot-on, the ash continues to break off fairly regularly at about half an inch, leaving sizable clumps on the floor and inevitably in my lap. It’s not until the final third where Big Bad John’s real character starts to show through, particularly in the ambient smoke. The smoke has a warm doughy texture that carries some grilled meat notes that sit absolutely perfectly in the nose on a warm afternoon. 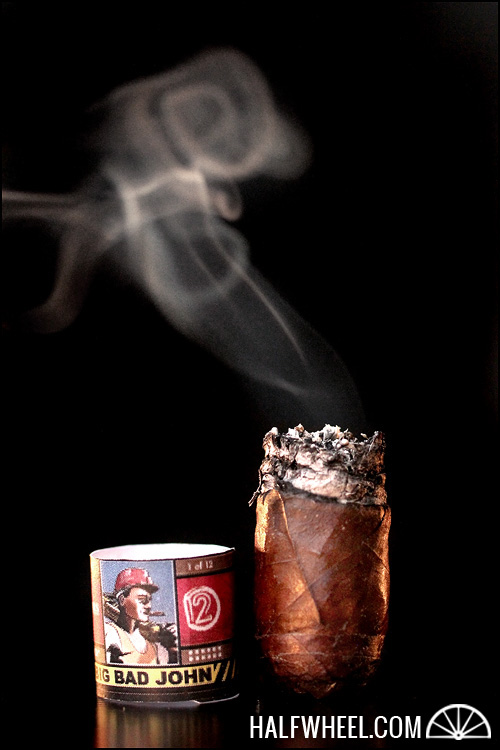 The Bottom Line: Size aside – and I say that because I’ve never hidden my general dislike of big ring gauges – the Ortega Cigars Wild Bunch Big Bad John Jackhammer is a pretty darn good cigar. Yes, it takes a while to get to the best part of it, which is the final third, but the smoke at least keeps it interesting and there is never a point where I thought of putting it down. For fans of 60 ring gauge vitolas, this is one of the better ones I can remember trying in recent memory, and certainly seems worthy of at least trying once, if not picking up a few to keep at the ready.