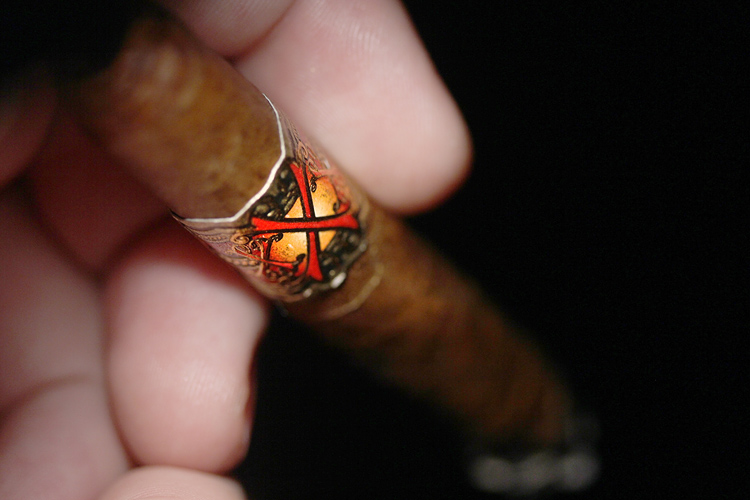 Editor’s Note: I make the following warning, the above is the name of the cigar. if you are reading this on a work computer, think about it. If you are on a computer with kids, think about it. If not, get ready for a review of a cigar that most have never heard of, perhaps for good reason.

In 1995, Arturo Fuente introduced a cigar that would change the cigar world forever — Fuente Fuente OpusX. Since its release, OpusX has been perhaps the most sought after cigar in the world. Even with production that is likely over a million units a year, for any smoker starting out, OpusX is the holy grail. It’s led to what has been a lot of myth and misinformation about the brand and in large part leads to the specialness that is everyone’s first Opus. While it is not the easiest cigar to find, it is in fact readily available. Still, for the vast majority of people whoever try a cigar, Opus is about as rare as it gets. While the normal sizes are available across the country four times a year, Fuente has become notable for producing unique releases, largely available only through their partnerships with Prometheus for the Cigar Family Charitable Foundation and at select stores, namely Casa Fuente, Holt’s and Tampa Sweetheart’s.

Some OpusX releases never see the light of day, although there is one notable website — vitolas.net. There lies a few hundred pictures of the OpusX sizes that few knew existed, many of which have never left the special part of the Fuente factory, aptly named the “Forbidden Alcove.” (You can see a few pictures here.)

In April of 2011 on the Cigar Family forum, Andrew Welch, known to many strangers as moki, the person responsible for vitolas.net posted a thread that by all accounts seemed like a belated April Fool’s Joke. The cigar was called “Pussy Juice,” a 6 3/4 x 36 Maduro-tipped unbanded creation: You can read his description here with more in the final notes.

There are two noted characteristics of the Pussy Juice: first, this is open at both ends, which Fuente claims is the first time this has occurred in this segment of the marketplace. Secondly, there are allegedly seven filler leaves in a 36 RG, which is a bit ridiculous.

Last year, someone close to the Fuente family was kind enough to send me a bundle of five, which looks like this: 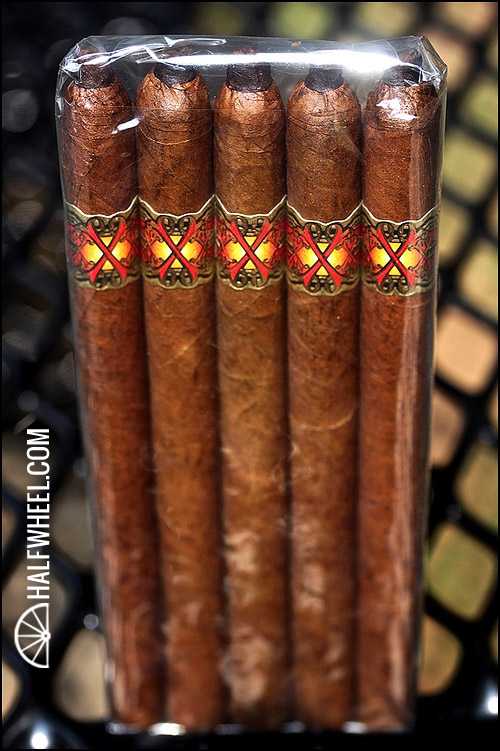 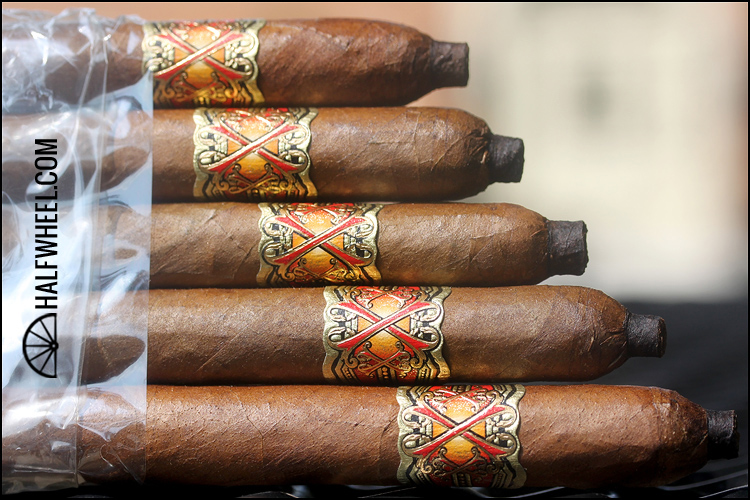 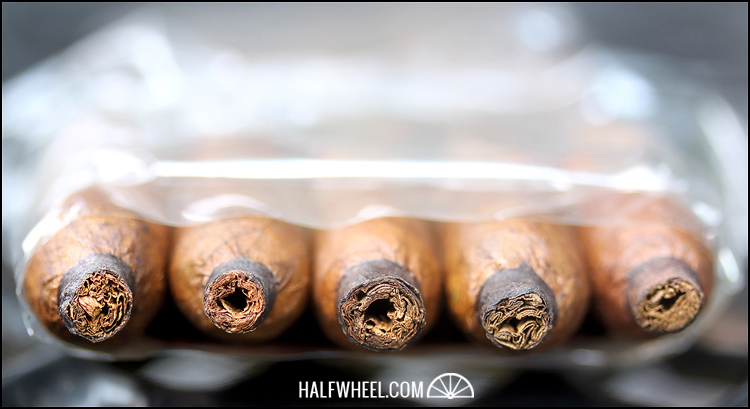 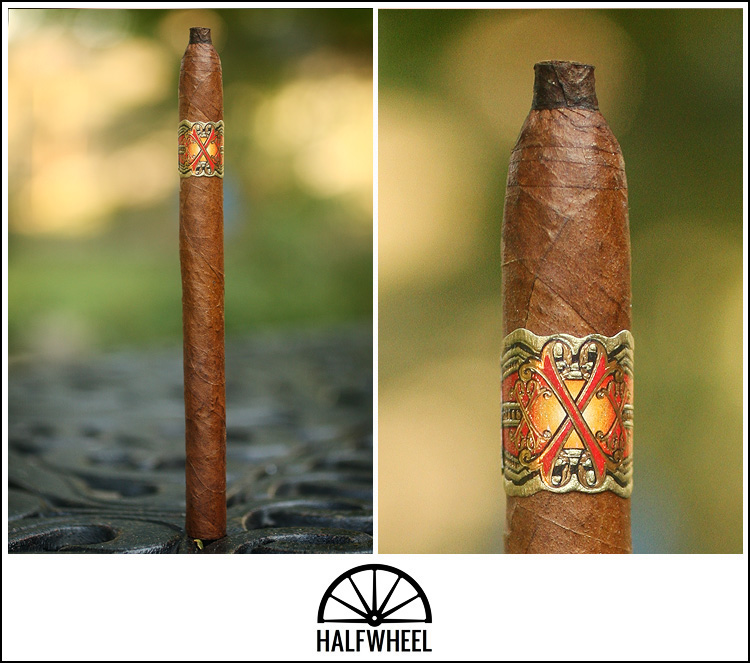 At the tip is a bit of an undisclosed Maduro tobacco. As you can see above, the holes aren’t really consistent, but draw was never a problem. The wrapper looks and smells like classic Opus: slightly red in color, but generally tan; some dark nuts, aged tobaccos and a touch of spice. You can tell there’s a bit of tobacco in the cigar, but far from exorbitant in appearance. It’s interesting contrast in aroma from the bottom of the Pussy Juice with some sweet nuts and brownies and a sharp black pepper. I opt for not cutting the tip any further, although if you gave this to someone with no instructions, nine out of ten probably cut the tip off. cold The draw is extremely narrow, yet quite open, which was a bit shocking with some sweetness and sourness and a plethora sharp black pepper.

The Pussy Juice starts the first third with some dark nuts and spices as an aroma and then it hits you. Tons of pepper with some aged earth underneath. The first fifteen minutes of the OpusX Pussy Juice is the most black pepper I’ve had in a cigar by miles, to the point where it’s almost toxic. There’s no warning, there’s no foreshadowing and the gingerbread and dry earth underneath do little to help my palate, which is beyond on fire, it’s in plain shock. It eventually settles to a slightly more manageable, yet still obnoxious, amount of black pepper with some burnt woods and eventually some sweet nuts and tartiness. While my palate is still attempting to pull together and get through it, there’s time to admire the construction: an inch and a half or so of stark white ash and a draw that is open, yet with great smoke production. I do get a bit of saltiness towards the end of the first third, more on that below. 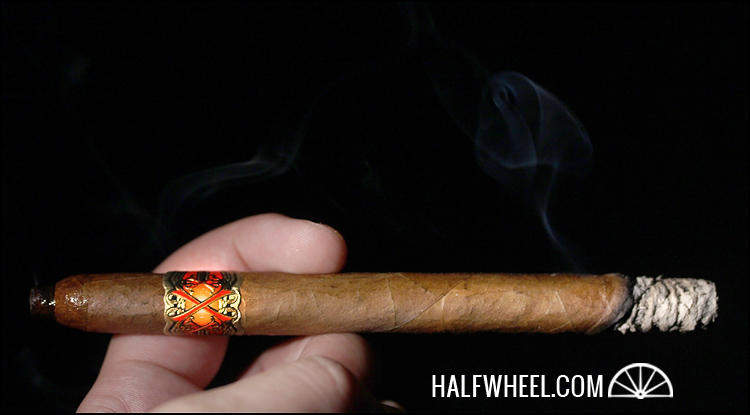 Into the second third and you are reminded that you are smoking a somewhat fresh OpusX, as it’s not until the middle point for the Pussy Juice to begin its assault of nicotine. While the pepper is still essentially where it was in the first third, there’s some earth, sweet cocoa, aged tobacco and some grassiness, albeit with a finish that is essentially pepper and tartiness. Draw is great and easy, although the cigar challenges you to smoke quickly. Smoke production is flawless with the smoke just suspended in the air. 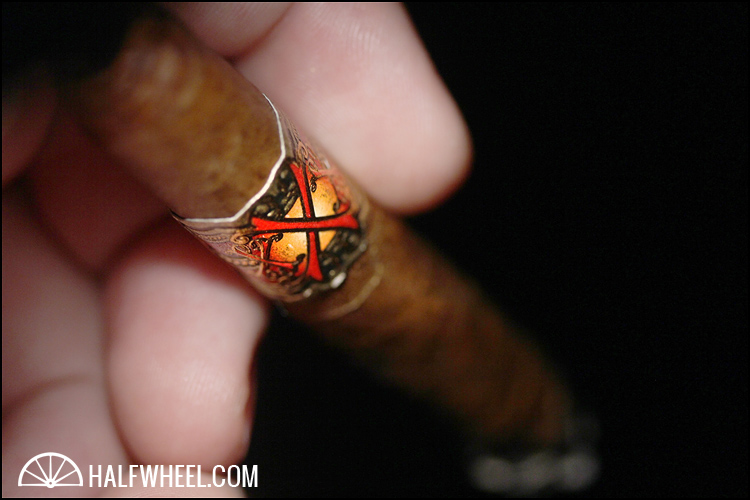 By the final third, most would have stopped, most should have stopped. The nicotine of the Pussy Juice continues to climb seemingly until the end of the cigar with the pepper becoming even more concentrated. There’s some citrus notes and dark cocoa, but the flavor that is not pepper is mainly just tarty. Construction of the Pussy Juice remains much the same and the cigar doesn’t get hot, even under an inch. 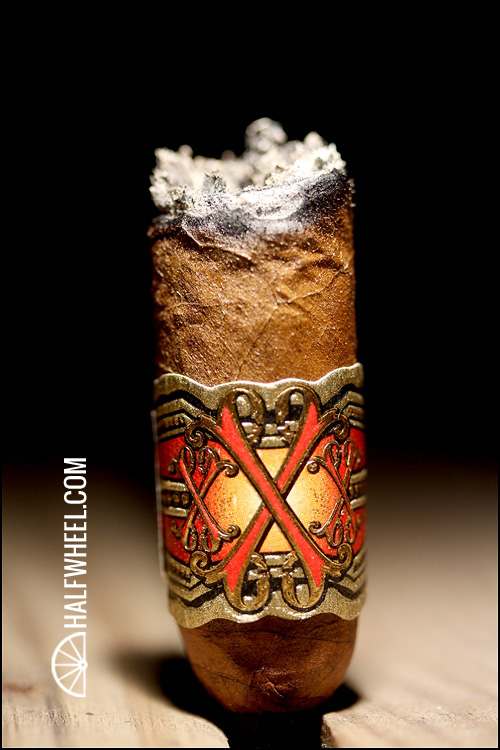 I probably would have put down this cigar in the first ten minutes if it wasn't an impossible-to-find OpusX, the pepper is that strong. The Pussy Juice, as you might imagine, is not a pinnacle of complexity. As with a lot of the Forbidden Alcove based cigars, it's impossible to know how much time the FFOX Pussy Juice has spent aging, which is notable as all OpusX cigars spend a year aging at Chateau de la Fuente before being sold, and most agree that the OpusX smokes better with a few years on it. Still, the cigar should get more complex and easier to smoke with as time goes on, although I'm not sure there's ever going to be an optimum that produces a cigar that is truly sublime. If you get a chance to try the Pussy Juice, have a big dinner, and sit back for one of the most unique cigars ever produced.