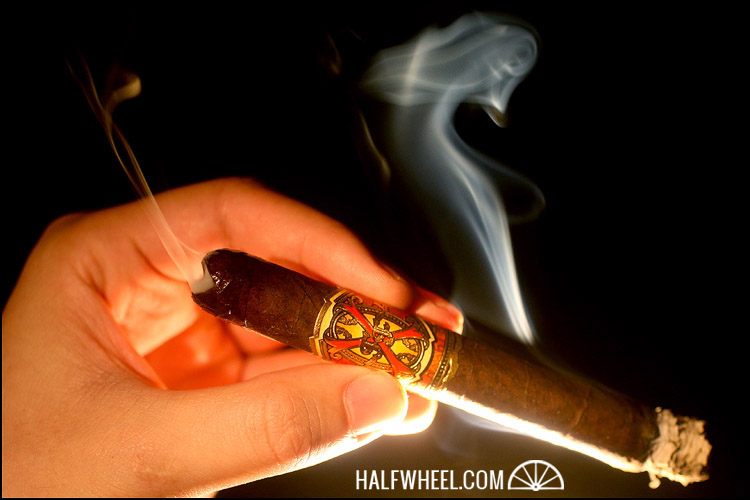 In 2002, Arturo Fuente and Prometheus teamed up to release the Prometheus 2002 Limited Edition FFOX ForbiddenX Humidors. They were described as the tenth anniversary for Fuente’s OpusX, however, most will remember that while the Rosado wrapper used for OpusX was planted in 1992, it wasn’t released until 1995. The release contained a collection of special sizes, but most notably featured FFOX Maduros in various shapes, including in Fuente’s Lancero, aptly named Phantom. Brooks previously reviewed the FFOX ForbiddenX Maduro Robusto which came in the same humidor. In the review he noted the uniqueness of the pre-2002 wrapper, quoting Vitolas.net:

OpusX Maduro cigars have a hybrid Cuban seed wrapper grown in the Dominican Republic on the Fuente farms; this wrapper is different from the Añejos, which use Connecticut broadleaf maduro wrappers. The OpusX Maduro wrappers were grown on a small part of the Fuente farm, on the side of a hill, where they were left out longer to ripen before harvesting. Because of the limited area they are grown in, and the additional exposure to the elements, the yield was very small. The Maduro wrapper brings a unique cocoa flavor and sweet balance to the normally very spicy OpusX flavor profile.Fuente has not been growing the maduro OpusX wrapper since 2001, so the potential supply of these cigars is currently even more limited.

The wrapper used on most releases after 2002, like the BBMF Maduro, is believed to be Connecticut broadleaf.

In 1992, the Fuente family planted the first seeds of the wrapper leaves for Fuente Fuente OpusX at Chateau de la Fuenta in Dominican Republic.  In 1993, the first FFOX cigars were made with this legendary wrapper.  In commemoration of the Fuente Fuente OpusX Tenth Anniversary, Prometheus International, Inc. produced 100 FFOX ForbiddenX humidors in 2002. 100 FFOX ForbiddenX humidors were produced in three different veneers.

The first 50 cigars of Carlos Fuente Jr’s special never-been-released collection of 100 FFOX cigars were shipped with the humidor to the authorized Prometheus dealers in November 2002 and the remaining 50 cigars,  in June 2003.

There are two significantly different bands not pictured: the FFOX ForbiddenX currently sold at Casa Fuente, which features the black ForbiddenX band and the FFOX Lost City Lancero. Both blends are identical to the normal FFOX Phantom. As mentioned above, this is the old Opus Maduro wrapper and it’s nothing like the 2004 and younger. There’s a slight purple hue to the thicker Maduro wrapper, which shows itself only above the golden FFOX band and the cedar sleeve, with the black ribbon below that signifies that this is a Maduro. Thankfully this example was in cello, because once you pull it out you get a wonderful aroma that starts with a dominating perfume and leather mixture, with aged and balanced barnyard and roasted nuts in the background. It’s unlike any OpusX and unlike any Maduro — well aged, smooth and very full. Cold draw produces a bit of cotton candy up front with citrus and a dominant coffee. There’s a bit of cedar and bittersweet cocoa and just a touch of hickory bbq on the finish. It’s medium-full to full in terms of flavor, but you get an idea that this is a strong cigar.

These were rolled (at least) nine years ago, but you couldn’t tell from the First Third. The first puff is a strong cedar and black pepper with some earth and aged tobacco. Quickly, the Fuente produces a black pepper coming from the back of the tongue and white pepper up front. That sort of complexity is truly unique to the lone FFOX Phantom Maduro I’ve smoked. There’s some cocoa and earth that show up in the lengthy finish. There are two things you notice immediately: the smoke production is absolutely insane and this is strong, really strong. As the first third develops the flavor profile settles to a mixture of peppers, mainly black with a bit of red, earthy cedar and a touch of bittersweet cocoa. Unfortunately the Phantom Maduro’s draw begins to tighten in the second third. I like a tighter draw, but it became apparent this was going to force a bit more work. That of course translated into picking up the pace just a bit, but I tried to keep it as slow as possible without it going out. The draw didn’t affect the smoke production one bit. One puff produced a literal cloud of smoke that would put near any cigar to shame. Yet, flavor-wise, the Opus Maduro isn’t really doing anything much different. There’s a bit more cedar noticeable, but the flavor profile is pretty much the same until the halfway point. At just about 3 and 3/4 inches (halfway) an interesting pepper note develops underneath my tongue. It was a foreign flavor to me, but I can best describe as a rather pungent white pepper. Then, for about an inch, the one portion of this cigar that was sublime. Up front there’s a bittersweet cocoa, some honey, a touch of vanilla, earth and that foreign pepper. Finish of the Phantom Maduro is a Corojo-like pepper with toasty earth, aged tobacco, orange peel and that hickory bbq note from the cold draw. It’s still a full-bodied, essentially full-flavored and full (plus) strength cigar, but at the end of the second third there’s a complexity that escaped the Lancero previously.

I’ll be clear, by the time the Final Third rolls around, I know it’s going to be a long night. Any rumors of this cigar losing something are either false, or this was (literally) deadly back in 2004. This is the strongest publicly available cigar I’ve smoked in at least two years. Nicotine definitely increases, but the black-ribboned Phantom was strong from the get go. Flavor-wise, there’s a chocolate note over earth and cedar, all dominated by layers of pepper. The complexity at this point is gone, but the flavor profile is better than the First Third. With a little less than two inches left the FFOX Maduro turns, and all of a sudden a harshness rapidly develops. After a little over two hours, I have finished one of my (few) bucket list cigars and am on my ass. I did it. One of the very few cigars that is on my bucket list. To be honest, this probably was the bucket list cigar. It disappointed, which wasn't shocking. If you had me write down my thoughts before I smoked this, I would have thought there was a cigar that maybe had lost too much — I was wrong. This was just too full, and outside of an inch towards the transition between final two-thirds, was not at all like the insanely brilliant cold draw. I haven't smoked an Añejo Phantom (they do exist), but given my thoughts on the blend normally, I don't have much hope. On equal price/rarity footings, I'd smoke the FFOX Phantom Maduro over a regular FFOX Phantom (and its identical Lost City and current ForbiddenX banded versions), but not over the Don Carlos Lancero and definitively not over the Casa Fuente Lancero, the latter of which might be the best non-Cuban Lancero sold today.