Five new Olivas are starting to appear around the country at special events, including the Oliva Serie V NUb 460. It, along with four other cigars, are part of Oliva’s new Special Event Sampler, a collection—as the name implies—that is only available at special events.

I broke the news last summer on the release:

Oliva will be offering a new event sampler at select events later this year—all made up of specific cigars that have never been offered for sale previously. While the details are still being worked out, the sampler will debut sometime after the IPCPR show in August at certain, presumably larger, events.Like the Studio Tobac World Tour Sampler, the sampler will be given to customers with purchase of a box, unlike the Studio Tobac World Tour—not every event will feature the sampler. The sampler includes one of each of the following:

Oliva previously offered a 6 x 49 Diadema as part of a sampler a few years ago, but this version features a San Andrés Maduro wrapper, the first time an Oliva Serie V Maduro has been released outside of the annual limited editions in October. Ian Hummel, who provided the picture above, also sent shots of specific cigars: Art is still being completed, but an Oliva told halfwheel the cigars will be presented in boxes, not the plastic packaging you see above.

On December 21, 2012, Oliva debuted the first sampler at an event at the new Match Lounge in Jeffersonville, Ind. and the cigars have appeared a handful of other places. Yet even today, nearly nine months after the announce of the cigars, most consumers haven’t ever been close to any. 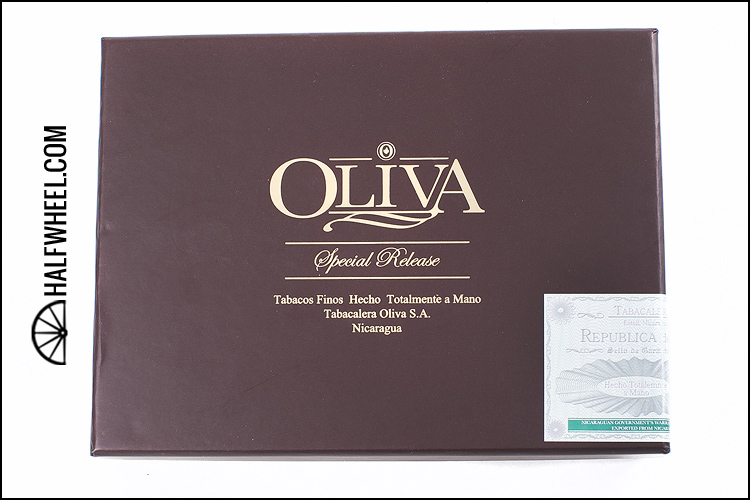 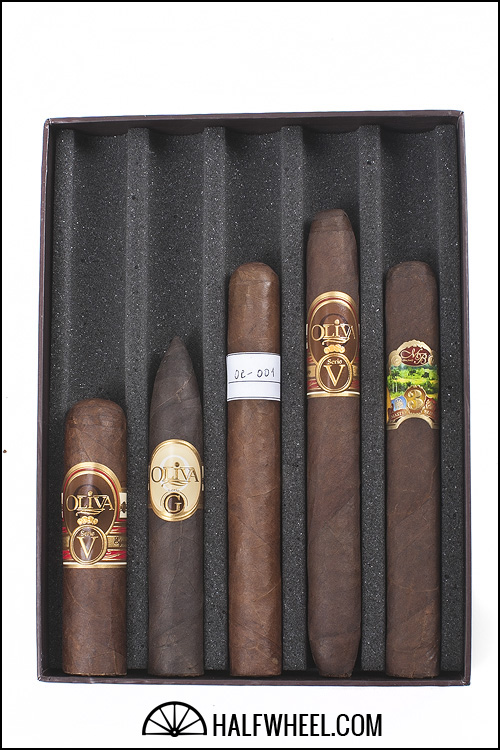 I think it’s safe to say that the Serie G Maduro Belicoso Round was not the cigar everyone most looked forward to trying, but amongst the other four choosing a most-anticipated isn’t easy. That being said, it seems hard to believe that the Serie V NUb wasn’t at the top of most’s people’s list, unless of course you don’t like NUbs or Serie Vs.

It’s hard to believe, but the Serie V line is now made up of seven full-time offerings and eight limited editions. It’s a far cry from 2007, when the cigar was introduced and quickly accepted as the flagship line for the Oliva family.

The 15 vitolas of the Oliva Serie V are: 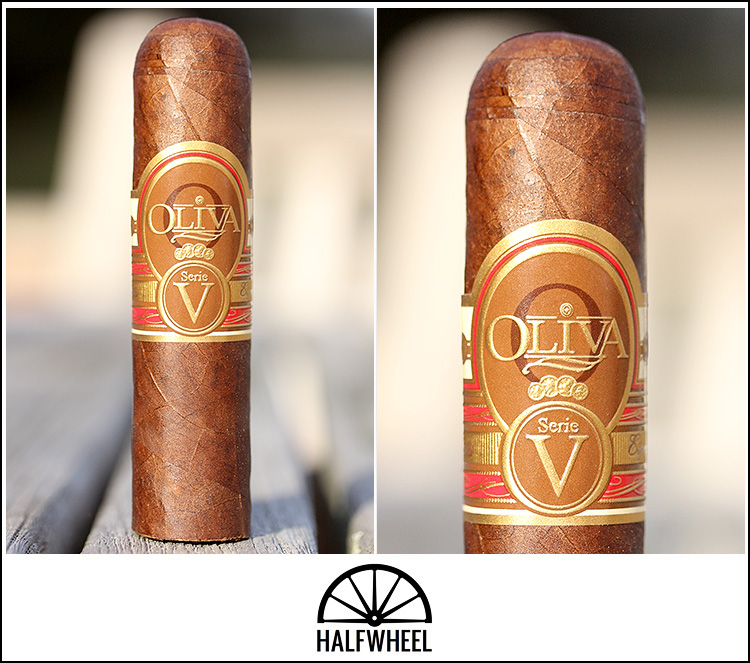 This seems familiar: classic Serie V aroma with a gigantic band. I’ve still never understood the NUb-size as a vitola, but this looks great. It has a great triple cap, something I notice on more and more Oliva products of late. From the foot, aged sweet cedar, some cherries and leather with a touch of pepper—in case you don’t know this, classic Serie Vs. The cold draw is a bit open with leather, cocoa, cedar, earth and some pepper right around medium-full.

After a decent time with the triple flame, the first third of the Serie V NUb 460 begins with cedar, leather, sweet pepper and some spice around the lips. Shockingly, the smoke production takes a while to get going and the burn rate is nowhere as quick as I remember. There’s a bit of uneven burn, but after a while the cigar begins to hit its stride. In many ways, there’s a lot of Serie V elements, but the flavor through the first third is a bit woodier than I would normally describe Serie V, not something I’m particularly thrilled with. Into the second third and my hopes of the sweet and strong contrast that I normally associate with the Serie V isn’t anywhere to be found. It’s woodier than the first third and doesn’t seem to be letting up. Unfortunately, the rich chocolate notes are nowhere to be found and the strength isn’t as edgy as the Serie V normally is, settling at a medium plus. 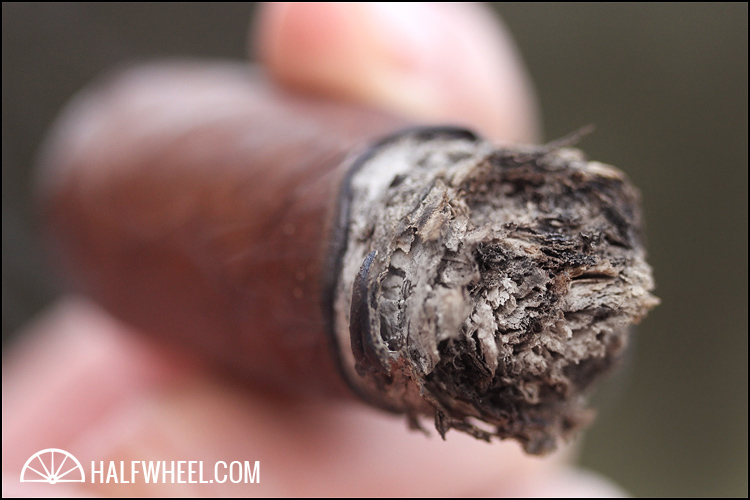 Burn rate picks up noticeably towards the final third, but the flavor continues its progression of becoming woodier and woodier. It’s more shocking than anything, definitely not what I was expecting, but still enjoyable. With less than an inch left, I pick up the gigantic band and take my final picture. 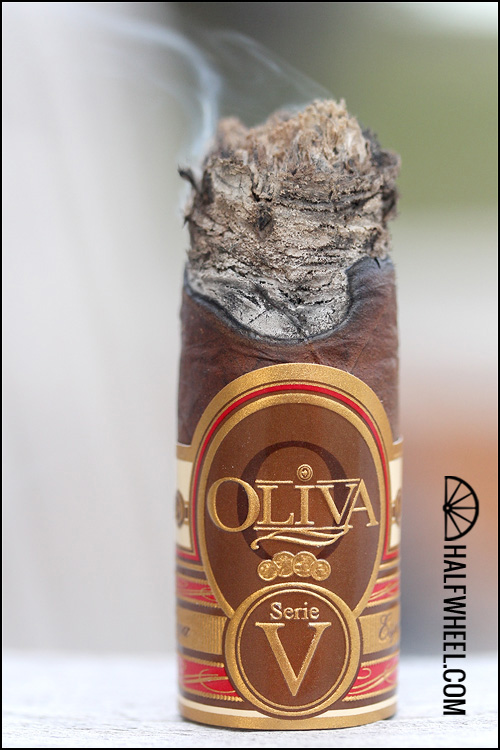 The Serie V line, and its documentation on halfwheel are great examples of how vitolas make cigars. I ultimately believe the Churchill Extra is the best representation of the Serie V profile, followed by the Belicoso, Double Robusto and No. 4. Without question, the Serie V Culebra is the best cigar of the line—the best cigar Oliva has ever made and probably one of my top 10 non-Cuban cigars—but it's not really a Serie V profile-wise. Oliva has made four Diademas, a NUb and a few other special sizes and all of them have been a bit different from the profile that I get from most of the regular production cigars of the line. This version is perhaps my least favorite, woodsy. The good news is, there are 14 other vitolas—of varying degrees of difficulty to obtain—that provide a plethora of different experiences, all carrying the same name. As for the Serie V NUb 460, it's much like my thoughts on the Serie V Lancero—just not the right combination for me.