Like it has for many companies, the European market has become an increasingly important target for Oliva.

In mid-September, just days ahead of Inter-tabac 2014, Charlie Minato reported on yet another Oliva Serie V being created exclusively for the European market, a short and girthy 5 x 60 vitola that reinforced just how much attention the company is giving the other side of the Atlantic Ocean. While the production numbers aren’t huge, with only 12,000 cigars being produced, it puts it right in line with many domestic limited editions and continues to show that the non-Cuban cigar market is expanding.

The Serie V line really shouldn’t need much of an introduction to most cigar smokers, having been a humidor staple since its launch in June 2007. It’s known as the strongest of Oliva’s offerings thanks to a top-priming Nicaraguan habano seed sungrown wrapper. Since its release, it has spawned numerous new vitolas, an annual maduro version release, plus the Oliva Serie V Melanio and Melanio Maduro, which have taken over the reins as the company’s top-shelf offering.

Additionally, Oliva released a line of small cigars called Viejo Mundo in 2013 that started in Europe before coming to the U.S. this year. Off the top, the Oliva Serie V looks just like any other in the line—no special bands, no marks, nothing—to distinguish it as a limited or regional release, and it would look at home on any domestic store shelf unless you happened to know the Oliva Serie V line by heart. The wrapper is a rich brown with a good sheen on it, not outright dark per se but on the darker side of the scale, and a hue that allows the gold trimmed band to visually pop. It’s a firm cigar, filled well with clean roll lines, no bulges or distractions and fairly small veins. The pre-light aroma starts off with a bit of candied mango sweetness but the pepper is sneaky quick and strong, exploding in the nose just as the first note fades away. A wood note tags along with it creating a dry tingling in the nostrils. The cold draw is easy and surprisingly mild, with touches of pepper trying to come out but not having the horsepower to do much to the palate, needing the help of the subtle wood notes to create a reaction on the tongue.

I’m impressed by just how peppery and flavorful the Oliva Serie V starts, with a tangy profile that sits atop a cedar base and reminds me of the flavors that had me calling the line my go-to for so several years. The smoke production is also sizable, as each puffs seems to generate a mouthful that explodes from the head of the cigar. Retrohales are just a bit too peppery for my nostrils, packed with a sharp, crisp black pepper, though that doesn’t stop me from trying to enjoy one a couple of times in the first third. While it becomes a bit drier, the flavor stays fairly linear through the first third, though there are touches of leather and sweetness that come out, the latter more so in the aroma, and the slightly shifted flavor offering a lingering tingle on the tongue. With an effortless draw producing ample amounts of smoke, it feels like the cigar is burning fairly quickly, but a check of the clock corrects my perceptions as it’s been nearly an hour since I lit the cigar. The ash is sizeable and dense, with the clump from one cigar holding on nicely and allowing me to tap it into the ashtray, while the other abruptly detached and landed in my lap. The pepper remains front and center at the start of the Serie V 560’s second third, almost to the point of being a bit much as every puff to this point has carried with it a good bit of kick. Because of that strength, I find myself slowing down how often I reach for the cigar, which in turn challenges it to stay lit and ends up resulting in a few relights. The sweet and tangy sauce note found at the get-go has returned and provides a deep complexity both to the flavor and aroma, while also helping to mitigate the strength of the pepper that happily sits on the tongue after every puff. Leather starts to become more prominent at the midpoint, which is also where the burn line starts to go just a bit askew, with the sweetness on hiatus for a bit and a continued tingling feeling in the mouth thanks to the pepper. Construction remains solid as the burn line corrects itself and the slightly open draw not affecting the otherwise fairly slow burning tobacco. Smoke production remains plentiful, while the ash is just a bit flaky but otherwise holds on well. 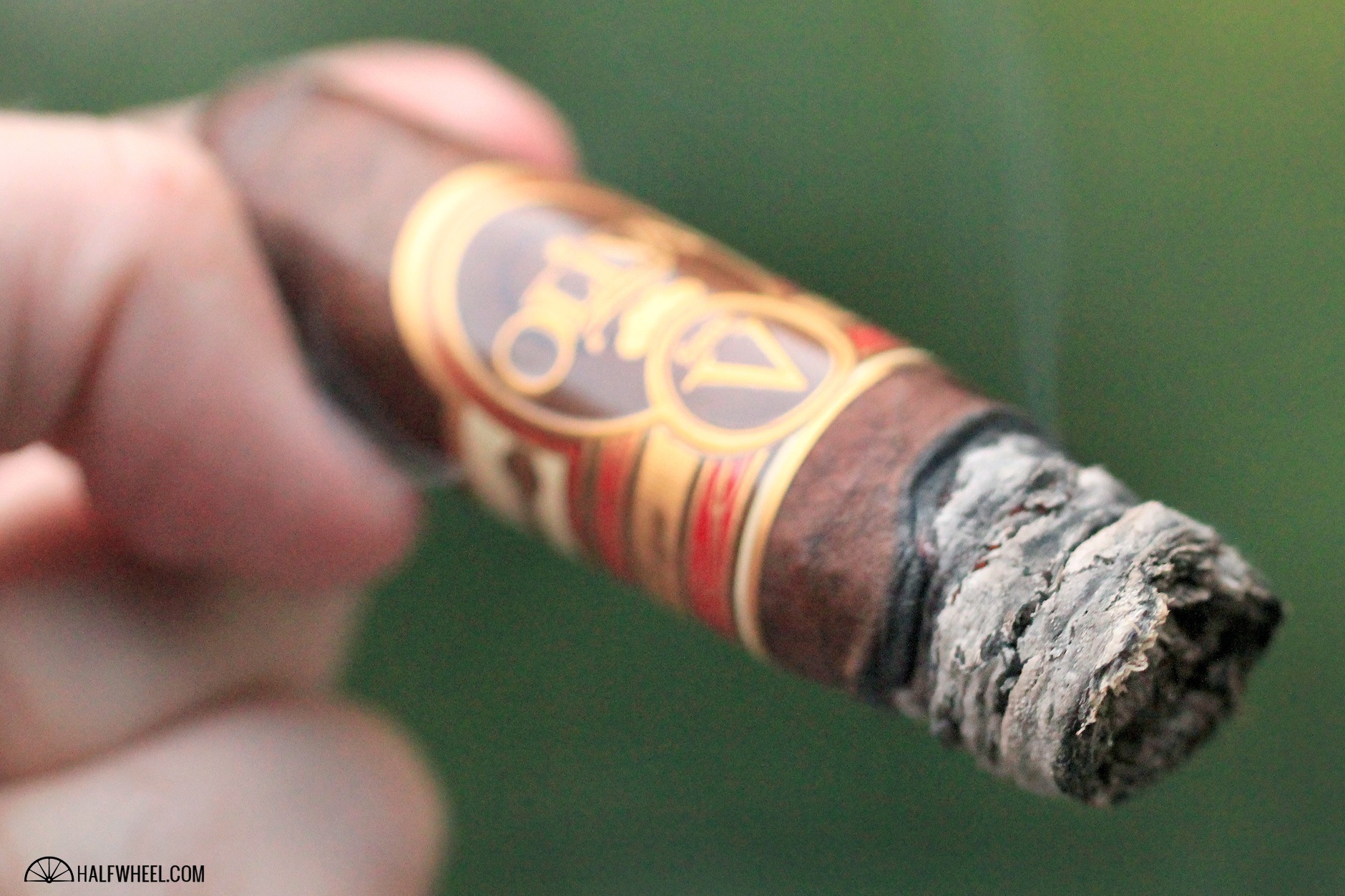 It’s more of the same in the final third, as the flavor profile shows just how linear it is, staying pepper-forward with largely smooth strength but enough pepper to really tickle the palate and parts of the throat. There is some sweet cedar that comes back into the equation and helps veer the flavor in a slightly different direction, reprising some of the notes from earlier on but in a somewhat different combination. The cigar struggles to stay lit at times, though I have a feeling that my own slow pace of smoking likely contributed to that at times. As should be expected from such a sizable vitola, the Serie V 560 continues to billow smoke, and its unabashed use of pepper starts to get in the eyes in the final inches, completing the cigar trifecta of sensory interactions. While heat becomes a bit of a factor and amplifies the pepper, the cigar can still be smoked pretty far down with no adverse affects. As I mentioned above, for quite some time the Oliva Serie V was my go-to cigar, but that has changed in recent years due to several factors, including the sheer explosion of quality options on the market, my increased time smoking cigars for review or other professional purposes—and as such not as many for personal purposes, as well as what I perceived to be a drop-off in the quality of the Serie V line. While I'm still not crazy about the vitola of the Serie V 560, trying it reignited my love for the line and gave me hope that the regular production sizes were back as far as the flavor I remember them having. It's a complex, pepper-forward cigar that doesn't sacrifice on flavor, rarely letting up on delivering layered notes that will keep the senses engaged from start to finish. I just hope European cigar smokers appreciate and enjoy these as much as I do.