At the 2011 IPCPR trade show, Nat Sherman showed off the first of its new brands under the direction of its then newly-appointed executive director for retail and brand development, Michael Herklots. While no new product was offered for sale, Herklots gave out a variety of test samples of the company’s newest project, Timeless. At the time, Herklots had a pretty good idea of what he wanted, where it would be made and even had the bands completed.

After a bit of delay, Timeless made its debut in December of 2011 offered at Nat Sherman New York City’s Townhouse and nationally in January of 2012. Timeless was offered in four sizes, all packaged in 20 count boxes, made at Quesada’s new Dominican factory.

On May 8, 2012, Herklots hosted his eighth annual birthday fundraiser to benefit Killingly High School’s Learning for Life Fund, his alma mater. As is the custom, there were a variety of special releases made for auction, one of which was a special humidor of the Nat Sherman Timeless Collection, which included a new special size, the Nat Sherman Timeless Collection No. 16, a 7 x 50/33 Perfecto.

Michael Herklots tweeted this picture of the humidor. 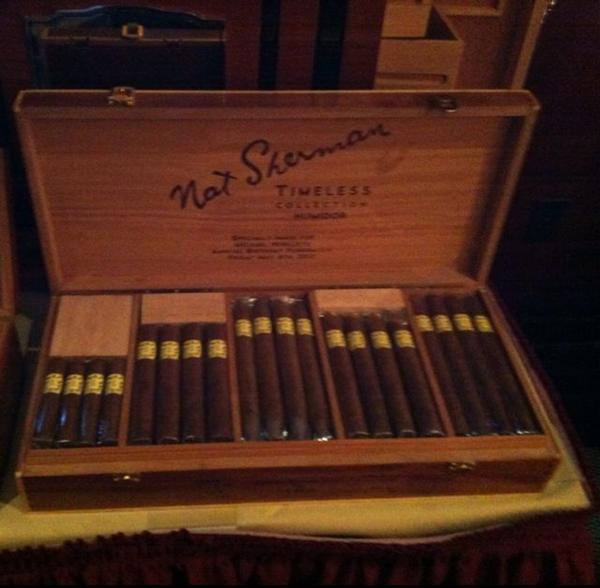 The sizes in order of appearance (left to right) are: For a company that isn’t really known for Perfecto—the appearance of the cigar is shocking, it’s striking. Quesada makes quality cigars, but the gigantic Salomon is crisp and sharp. The wrapper could be a better, but it’s still quite attractive and definitely improved by the size. My sample didn’t come in cellophane, so the aroma is a faded with a heavy barnyard aroma with a touch of leather. While the cut is clean, there is a bit of tobacco that falls out unfortunately. Cold draw features a perfect resistance with sweet coffee and earth up front, and a dominating mixture of black and white pepper.

The No. 16 begins the first third on the fuller side with smoke rushing out. There’s some toastiness that increases before the Dominican earth dominates the profile. While the creaminess eventually emerges on the finish, but it’s joined by a heavy mixture of white and black peppers on the tongue. The first third settles to a creamy Dominican earth, some hints of vanilla, citrus through the nose, a toasty finish and a great black pepper. Into the second third and the smoke production continues to be incredible. Ever since the Timeless No. 16 passed the nipple portion of the cigar—the smoke production has been phenomenal. A coffee note develops, but the cigar is still much of the same: sweet Dominican earth, creaminess, black and white peppers and a bit of toastiness. There’s other complexities, citrus and a bit of a deep dark cocoa but not a whole lot of change. Strength has picked up from the medium-plus nature of the first third and now sits around medium-full. 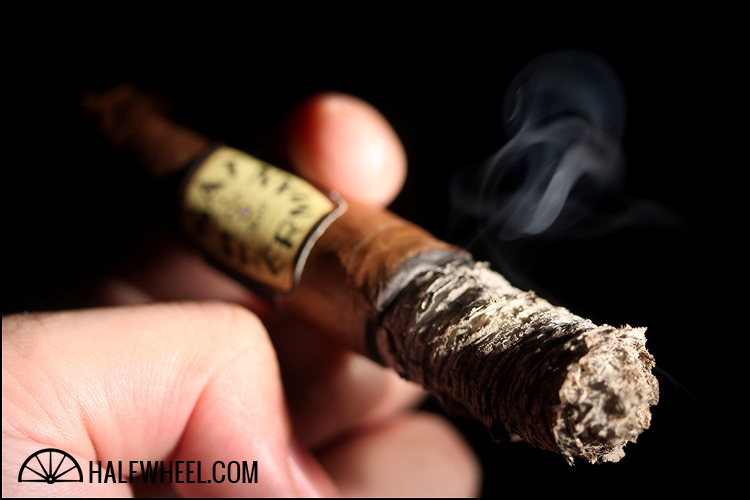 The final third of the Timeless sees a newfound meatiness enter the profile, and the No. 16 eventually loses the prior two thirds, finishing with just the meatiness and creaminess. Smoke production is great until the end, as is the construction across the board. Strength finishes medium-full definitely stronger than either two sizes I’ve had. This was not a cigar that was going to offer many changes, and that wasn't a bad thing. The No. 16 is my favorite of the Nat Sherman Timeless Collection for three simple additions: the refined pepper contrast, the increased depth and the extra kick in strength. The Timeless Collection is not my favorite blend Quesada has made—not bad, but far from something like the España. If you like the Timeless Collection and are looking for a bit more, you'll love the No. 16; if you were like me, this is not going to revolutionize much.