In June of 2012, Altadis USA sent out a press release that made a few people scratch their heads. It was a press release for the newest Montecristo line, the Montecristo Epic Premium Selection ’07, and there were a lot of promises. In case you need a refresher, here’s the text:

June 29, 2012 — Altadis USA is proud to announce a new launch Montecristo Epic Premium Selection ’07 – perhaps the best Montecristo ever!
So Special, So Unique, So Select, It’s Epic, MONTECRISTO EPIC
The task of creating Montecristo Epic was assigned to a special team of our most skilled and accomplished cigar makers – Grupo de Maestros – artisans with centuries of combined experience.  It is a true handmade luxury, a masterpiece of complexity and full-bodied smoking pleasure made of the finest aged tobaccos – Vintage 2007.
Every step of the process, from hand selecting the ultra-premium tobaccos to each cigar’s flawless construction is performed with meticulous attention to detail and obsessive devotion. Each cigar is hand inspected and every box includes a certificate of authenticity signed by the artisans at every step. That’s what makes the cigar Montecristo.  That’s what it makes it Epic.
Wrapper:  Select Ecuadorian Habano
Binder: Nicaraguan
Filler: Special Selection of Vintage Nicaraguan & Dominican Tobaccos
Production Team:  Grupo de Maestros
Vintage: 2007
Sizes: Churchill (56X7’’), Toro(52X6’’), Robusto (52X5’’)
Packing: 10 cigars/box
RSP: $15, $14, $13/stick
Launch Date: June 2012

It was met with skepticism, including from yours truly, who quipped, “I don’t think any of us could attempt to understand Altadis’ press releases.” The press release itself set expectations high, claiming to be “the best Montecristo ever.” Early reports from those who sampled the cigars were that they were actually something from there, with some even agreeing with the press release.

Then it became known that the line would be receiving a special fourth vitola, the Montecristo Epic No. 2 Premium Selection 2007: 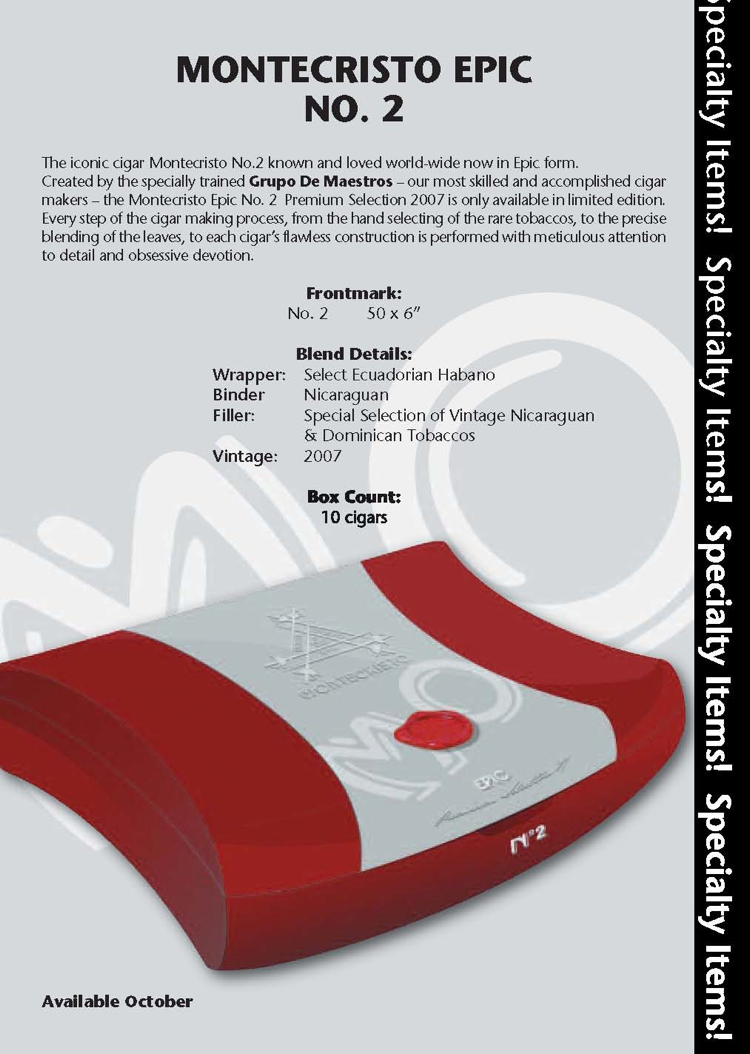 The cigar was shown at IPCPR 2012 with its unique packaging, which is different from the rest of the line. As you can see below, the cigars come in boxes of 10.

As noted by Cigar-Coop, VP of Advertising & Communications Janelle Rosenfeld had indicated this is a limited edition. We asked at IPCPR for exact numbers, but none were provided. The Ecuadorian wrapper is a dark hue—and while not the case on my examples—I imagine sometimes the exact color as the traditional Montecristo band. It’s an interesting take on the vitola and reminds me a bit of the classic Montecristo No. 2, but the band placement really makes the Epic No. 2 its own cigar. From the wrapper there are smooth sweet cocoa notes, touches of cherry wood and a gigantic vanilla note from the foot. The cold draw presents a huge vanilla note, some sweet varnished wood, a touch of red pepper.So far, pretty good.

The first third of the Montecristo Epic No.2 begins with some sweet woodsiness with some nuttiness followed by a decent toastiness and some fruity sweetness. There’s a big nutty note all over followed by orange coming from the back. I’m not sure it’s a masterpiece as far as flavor combinations go, but it’s enjoyable. Eventually the flavors settle to sweet woods, vanilla and bits of black pepper. Much of the big sweetness seems to disappear around the 15 minute mark. Smoke production is good, as is the draw, but I do have to make a few touch-ups, largely to keep the cigar lit. It seems like the flavors are disappearing as the cigar progresses. By the second third, the cigar is still full flavored, but it’s a lot less dynamic. A great salty nuts, sugar, floral and cedar. It’s smooth, although my mouth is salivating at levels that might be history as far as my cigar smoking history. Strength is medium, nothing more, nothing less and the Montecristo Epic No. 2 Premium Selection 2007 doesn’t seem to be moving from that mark.

The final third of the Montecristo sees the domination of the cedar continue with the nuttiness from the second third and a return of the toastiness. Once again, a lot less flavors than the first third, but smoothly put together into a full mixture. Construction remains great until the end, but eventually I start to detect some harshness as the cigar narrows and ends. You walk up to the counter in a tobacconist with four of these, as I did, and the register rings up to $80 and change. It doesn't sit well, before or after smoking. There's no way around this, a decent offering, but a fairly poor excuse as a way to spend $20 in a cigar shop. I wouldn't say this is a great cigar and quite honestly, there are a few Altadis USA products I'd smoke before this, but it's enjoyable. That being said, I fail to see what about the Montecristo Epic No. 2 Premium Selection 2007 makes it special enough to even warrant the price of admission, let alone anything else it is being suggested as capable of doing.