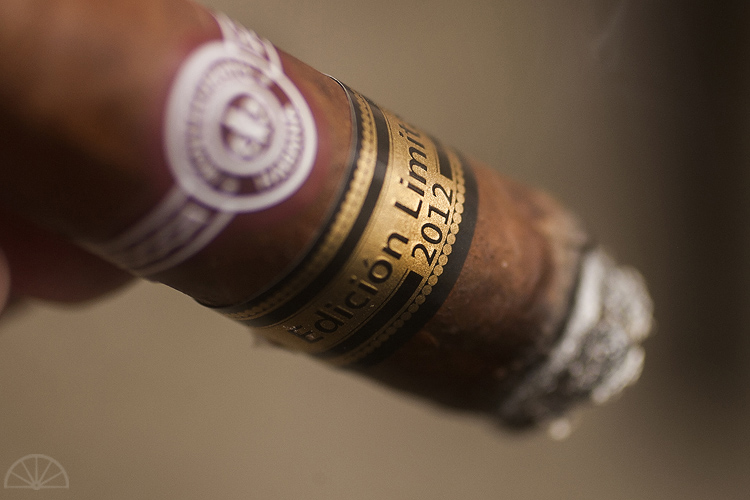 At the XIV Festival del Habano, Habanos S.A. honored the “520th anniversary of tobacco discovery.” Amongst the celebration was a preview of the annual Edición Limitada releases, including the Montecristo 520, a 6 1/8 x 55 Double Robusto.

Normally, there are three Edición Limitadas per year. For 2012, they were:

The Montecristo 520 was unique in many ways, one of which was the ring gauge that it has and another of which is the explanation behind the name. The press release gives the details:

Montecristo 520 Edición Limitada 2012 is a unique Vitola, created so as to commemorate the 520th Anniversary of the arrival of Cuban tobacco to Europe after Columbus first saw it in Cuba in his first trip in 1492.
Montecristo 520, whose factory name is Maravillas No. 3 (55 ring gauge and 155 mm in length), is produced for the first time in Habanos for this Limited Edition. This size provides all the aroma and taste of Montecristo´s classic blend, with its characteristic Medium to full Flavour. All the Habanos of this Edición Limitada 2012 were made Totalmente a Mano Tripa Larga –Totally Handmade Long Filler – with selected leaves coming from the Vuelta Abajo* zone, Cuba.
They are produced in small quantities by expert Cuban cigar rollers so as to meet the expectations of Habanos enthusiasts around the world.

Here are what the boxes the Montecristo 520 look like:

The Montecristo 520 is gorgeous with a dark, slightly red, coffee bean-colored wrapper that glistens with oil. There are a few veins visible, but they are not overly distracting and the resistance when squeezed is perfect. The aroma coming off of the wrapper is a combination of sweet hay, barnyard, cedar and chocolate.

The first third of the Montecristo 520 begins quite earthy profile-wise with strong notes of espresso, cedar, dark chocolate and a great vanilla sweetness. There is also a strong salty note that I can taste both on my lips and on the retrohale that really adds quite a bit to the flavors. In addition, some pepper joins the saltiness on the retrohale towards the end of the first third. There is a little harshness noticeable, mostly in the back of the throat, but not overwhelming at any point. The draw is more open than I would like and the burn is a bit off, but again, not enough to really annoy me. Smoke production is copious and dense. Strength-wise, the 520 begins at around a lower medium and does seem to be increasing as it burns down.

Coming into the second third of the Montecristo 520 and there are already quite a few changes to the profile. Both the saltiness and the harshness from the first third have noticeably receded, while the main flavor has morphed from a dark earthiness to a great coffee bean note. Other flavors of cedar, hay, coffee, leather and nuts ebb and flow, while the vanilla sweetness from the first third has only gotten stronger. There is actually more pepper noticeable on the retrohale and a bit more spice noticeable on the lips, but thankfully, the harshness that was present at the start of the cigar has all but disappeared. The draw is still just a bit more open then I like, but the burn is spot on and there is plenty of smoke. Overall strength ends the second third a solid medium—and still seems to be creeping upward—albeit slowly.

The final third of the 520 shifts again with the saltiness from the first third coming back with a vengeance and sticking around until the last puff. Other notes of hay, coffee, leather, earth and just a tiny amount of citrus combine well with the vanilla sweetness flavor that has decreased a bit from its peak around the halfway point. The draw has tightened up nicely, and the burn remains excellent. Smoke production remains consistently above average. The overall strength is just below the full mark by the time I hit the nub.

I have really been looking forward to this release, which is saying quite a bit, considering the 55 ring gauge that it sports. The 520 exhibits a classic Montecristo taste, and while there is a little bit of harshness to the profile at this point, I think that the strength, richness of the flavors and balance make this release an excellent candidate to age. I did not enjoy it as much as the H. Upmann Royal Robusto, but it was fairly close. Definitely one of the better Edición Limitadas that I have smoked recently.