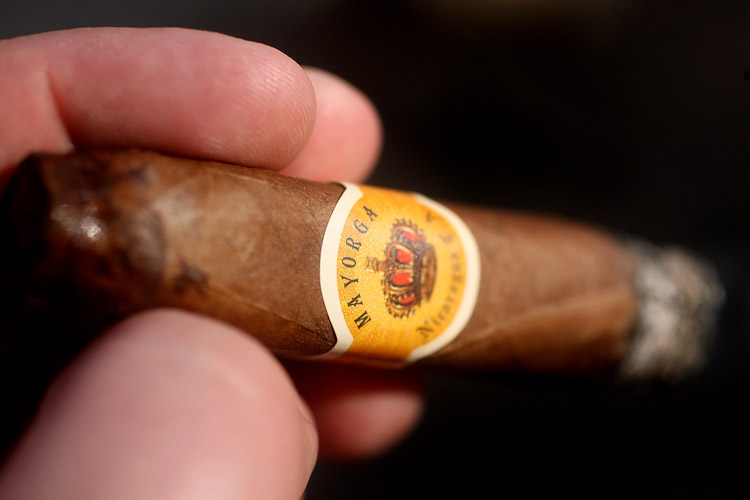 Mayorga is perhaps the definition of a boom brand. Introduced in 1995, in debt from day one, sold to a major company by 2001. Mayorga was the brainchild of brothers Martin Mayorga and Carlos Mayorga, both of whom were in their twenties when the brand launched.

By 1997, Plasencia took over production and in 1999 the brand was reintroduced with the help of Lew Rothman and Nestor Plasencia. This came from the initial shipment of 1999 cigars when Rothman reintroduced the brand with a lower price.

A December 1996 article from the Washington Post does a pretty good job of describing the company’s early history.

At this time of year, most college seniors are rushing to interviews, trying to land that dream job before graduation day.

But Georgetown University business student Martin Mayorga isn’t worried about future employment. He knows who his boss will be when his undergraduate days are over — himself.

Mayorga, 23, a major in international business and finance, is the sole proprietor of Custom Cigar Co., a wholesaler and distributor of high-quality cigars imported from Nicaragua.

To introduce these cigars to the American market, Mayorga has created his own label, La Cosecha (Spanish for “the harvest”), with the help of classmate Jennifer Millman, 21, and his brother Carlos, 26, who is getting his MBA at Northwestern University’s Kellogg School of Business.

In operation for less than a year, Custom Cigar will receive its first major shipment of 10,000 cigars this week, and Mayorga is negotiating deals to sell them in country clubs, cigar lounges and hotel and restaurant chains around the country.

So why would Mayorga want to take on the risk of a new business when most students his age are worrying about cramming for exams and paying off student loans?

“I’ve had a lot of internships and summer jobs at places like the World Bank and law firms, but I realized that the result wasn’t rewarding for me,” said Mayorga, who has a Nicaraguan father and Peruvian mother but was raised in Potomac. “It’s not like when you have your own business, and what you put into it is what you get back.”

Mayorga says his entrepreneurial spirit, love for cigars and Latin American background contributed to the launch of Custom Cigar. When he couldn’t buy some hard-to-get La Finca brand cigars for himself last year, he contacted the manufacturer in Nicaragua. Months of telephone conversations and faxes established a friendly relationship between the two men, and in August Mayorga was invited to a business meeting by the owner of the plant to discuss Mayorga’s role as an importer.

The meeting, Mayorga says, was a classic example of the cultural differences between Latin America and the United States. When Mayorga reached the cigar plant in the remote village of Esteli, the owner and managers chatted with him for over an hour before getting down to business.

“The negotiation process is completely different down there. They’re interested in forming a friendship rather than just getting down to contracts,” Mayorga said.

The cigar manufacturer — who is one of the largest suppliers in Latin America and had previously rejected dozens of similar proposals from more established companies from the United States, Europe and Asia — has started to supply Custom Cigar with 10,000 cigars a month. Mayorga says that number will probably increase to 100,000 by June, bringing in an estimated monthly revenue of $ 200,000 to $ 300,000, although he doesn’t expect to make a profit “for a few months.”

So far, Custom Cigar has distributed about 2,000 cigars, but those have mostly been promotional samples and small local sales. The company sells the cigars, which come in four sizes, for $ 50 to $ 75 per box — roughly $ 3 per cigar.Projections compiled by New York-based Cigar Aficionado magazine put cigar imports at almost 290 million for 1996, up about 100 million from 1995.

“It’s easy to say at this point, there’s no better time to get into the cigar business than now,” said the magazine’s managing editor, Gordon Mott. “But that said, there are a lot of people who have arrived at the same point, so there’s a great influx of people trying to get into the business.”

Two of Custom Cigar’s biggest accounts are with the two Capitol City Brewing Co. microbreweries in the District and Havana Cigar Chest Co., a cigar distributor in Fairfax that will supply Washington area restaurants, including Morton’s of Chicago and the Palm, with the La Cosecha brand. Custom Cigar also will co-sponsor a cigar dinner at Capitol City in February, which may become a monthly event.

At Capitol City, the cigars have been a hit. “This location alone sold 150 cigars last month, the first month we had them,” said Dana Cybulko, manager of the Capitol City location near Union Station. “The response has really been incredible.”

Another client, Graciela Cabezas, retail manager for the Grand Havana Room, has ordered 1,000 cigars from Custom Cigar. La Cosecha will be one of more than a dozen brands the cigar lounge will carry when a new location opens on 19th Street NW in February.

Unlike many other start-up companies, Custom Cigar has the luxury of being a bit choosy about customers due to the recent increased demand for quality tobacco products, Mayorga said.

“We’ve been meeting with people who handle golf days at country clubs, new companies that are opening cigar lounges in major cities across the U.S. . . . There’s just so many markets,” said marketing director Millman. “We just really have to sit down and decide who we want to deal with and where we want the product to be.”

Mayorga projects monthly sales of 150,000 cigars by this time next year. That number would establish Custom Cigar in the marketplace, he and his supplier say. At that sales pace, annual revenue would be about $ 5 million.

“But I’m not trying to base our future on financials, I see that as working backward,” Mayorga said. “It’s a big concern obviously, but the financial aspect will be a byproduct of introducing a quality cigar and keeping up with the demand for it.”

In January of 2002, Mayorga would tell Sarah Gebhardt of the Washington Post:

“I made a lot of mistakes with cigars. I borrowed a huge chunk of money and the next thing I know I’m stuck with a warehouse full of cigars and no money,” Mayorga said. “You can do all the research you want, but you don’t learn until you get on the front lines. You learn you may not have the means or financial backing. So I started off slow with the coffee [business].”

Mayorga demonstrates one of the key features of an entrepreneur: Though a big idea might turn out to be a big flop, the lessons learned often are put to use down the road with another idea. In Mayorga’s case, though the cigar business went up in smoke, his persistence and self-confidence did not.

In fact, people who knew him during his hard times know little of Mayorga’s struggles. Mike Copperman, owner of Bethesda Tobacco who met Mayorga five years ago through the cigar business, still views Mayorga’s cigar business as successful. That’s because Mayorga cared about the product he was selling and served his customers well.”Success begets success,” Copperman said. “He has a celebrity air in the cigar world about him. There are people who follow him with a passion.”

In April 2001, Mayorga would sell the cigar brand to Lew Rothman of Santa Clara/JR Cigars, according to the 2002 article, the change in ownership absolved Mayorga of $200,000 in debt. The first third of the Mayorga starts out quite bitter with some wood notes thrown in the mix. It is an almost overwhelming bitterness to start, which recedes more and more as the cigar continues. About halfway through the first third, the bitterness calms down enough for me to somewhat start tasting other flavors, such as a weak floral note that it is not strong enough to make much of a difference in the profile. Strength of the Mayorga is negligible by the end of the first third, but the burn and draw are perfect. Sadly, the second third is just more of the same: same overwhelming bitterness, same great burn and draw and the same disappointment in the profile. Even on the retrohale there is no spice or pepper, but the cigar still burns and draws like a champ. Strength of the Mayorga is still nonexistent as well and does not seem to be getting any stronger any time soon. The final third of the Mayorga holds no surprises at all, both in profile (still bitter as hell, but now with the added benefit of a sour aftertaste) or in construction (wonderful). I am able to get down to what some might consider a nub before finally quitting, but if I was not reviewing the cigar, I would have pitched it after the second third. I knew almost nothing about the Mayorga before it was handed to me to review. However, this cigar smoked like exactly what it was, a 15 year old smoke that was expired. It really was a Tale of Two Cigars: while the construction and draw were absolutely wonderful, the overwhelming bitterness in the profile destroyed any chance that I was going to taste any other flavor of note.  In fact, pretty much the only good thing about The Mayorga other than the aforementioned burn and draw was that it burned very quickly for its size and thus was over quicker than I expected.