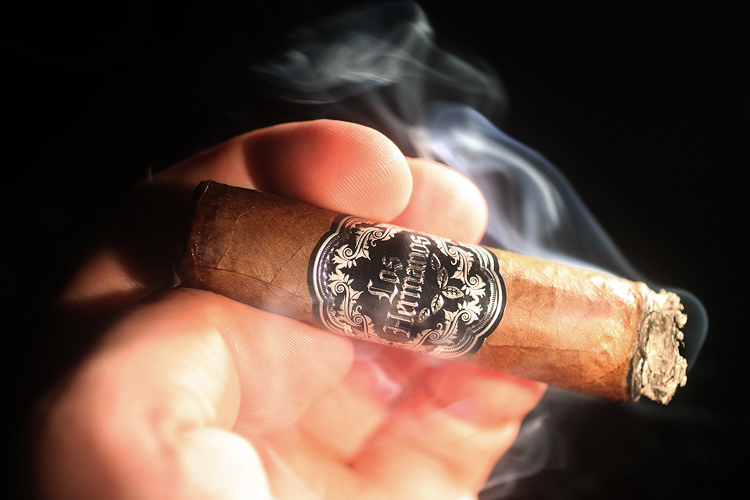 When reviewing the Los Hermanos Robusto in November of last year, one of the new vitolas that Atlantic Cigar was thinking of producing in 2012 was a limited edition box-pressed Robusto. They did eventually decide to go through with that plan, and produce not only that size, but a Corona Gorda as well.

But first, a little about the Los Hermanos blend from the Atlantic Cigars website:

Atlantic Cigar, for those who aren’t familiar with the company, is a family run business. Five brothers have been running the company for the past 15 years, if you’ve placed an order with Atlantic in that time; chances are you have spoken to a brother Scipioni. When coming up with a concept for a collaboration project between Atlantic and Paul Palmer of Casa Fernandez, they decided to finally pay tribute to the brothers by calling this special cigar “Los Hermanos”, the brothers.

Created by the people of Casa Fernandez & Tropical Tobacco, the Los Hermanos blend was created using Casa Fernandez’s legendary Aganorsa leaf and the skilled blending of even more legendary Arsenio Ramos. The Cigar was created from Criollo 98’ seed, Nicaraguan fillers and binders, and a Café Colorado wrapper to finish the cigar off. The cigar is a consistent full-bodied and rich smoke with great balance and flavor. A pleasant mixture of balanced spice and sweetness as only Aganorsa leaf can produce.

All of the Los Hermanos cigars are made in small-batch quantities once a year to maintain quality and consistency, the number of boxes will vary from year to year based on the availability of the tobacco.The box-pressed Robusto is the only vitola rolled in Miami, and the blend has been slightly tweaked compared to the other sizes in the line to be a bit stronger, and to take advantage of the box-pressing that it possesses. Only 150 boxes of 20 have been produced.

Here is a little more info about the Miami Edition:

The idea of doing a Los Hermanos box-pressed cigar came about after numerous customer requested us to produce a size of the Los Hermanos in a box-press format. So we took a trip down to Casa Fernandez Factory in Miami where we spent the next few days working closely with Paul Palmer and Cuban master Arsenio Ramos. Since this cigar is boxed-pressed the blend had to be tweaked from the original Los Hermanos line, in addition the box-pressing alone produces a unique flavor profile. The cigar is also unique as it is rolled in Miami by top level Cuban rollers, the construction is outstanding. The cigars are produced in limited quantities and the first run totaled only 150 boxes, like the original Los Hermanos sizes these will only be produced in small run batches once a year. The cigar is a powerhouse, full bodied with loads of flavor and a hint of sweetness and a very unique and pleasant umami flavor note on the finish. This Nicaraguan puro is a true showcase of the quality of Aganorsa Leaf tobacco and the blending skills of the people at Casa Fernandez.

The Los Hermanos comes in boxes of 20, with only 300 boxes of each size released (other than the box-pressed Robusto, which has only 150 boxes). There are now five different vitolas, which are (top to bottom): The Los Hermanos is a nice looking cigar with a slightly reddish brown wrapper, fairly dry and smooth to the touch. It is obviously box-pressed, but not sharply so and the result on the foot is really more of an oval than anything. The wrapper smells faintly of hay, dark chocolate, leather and a bit of pepper. There is also a very nice triple cap and while there are some veins present, they are not prevalent enough to be distracting.

Starting out the first third of the Los Hermanos and I am immediately hit with some strong spice on the tongue and the back of my throat, along with flavors of leather, bitter espresso, hay and wood. The spice note is quite strong for about ten puffs, then slowly starts to die down. There is a slight sweetness that comes and goes, but it is not near strong enough to place as of yet and I am not even sure it will stick around. The draw is just a bit loose, but the burn is wonderful and smoke production is excellent. Strength starts out at a mild-medium, but is only getting stronger and quickly. Coming into the second third of the box-pressed Robusto and the profile shifts quite suddenly in a few ways. First, the strength starts increasing faster than I anticipated and is medium-full by the end of the halfway point. Second, there are some changes in the flavors with a gritty earthiness becoming dominant combining quite well with other flavors of leather, cedar and even a nice nuttiness. Lastly, the sweetness from the first third has exploded into a great graham cracker note. The burn and draw remain excellent and the smoke production remains copious. The find third of the Los Hermanos seems to combine the flavors of the first two thirds with hay, leather, earth, slight nuttiness, espresso and even some dark chocolate. The graham cracker sweetness has dropped off a bit from its high during the second third, but is still a major factor in the profile. Construction remains excellent to the end, and I am easily able to nub it. I have always been a fan of the Los Hermanos line, despite the fact few people have ever heard of it. While the Corona Gorda and the Robustos are usually my go to sizes, I truly think that the box-press and tweaking has changed this blend for the better. Not only is it slightly stronger, but it is also quite a bit more balanced than the other non box-pressed sizes in the line. The profile was surprisingly complex, there were quite a few flavors present and they did change up a few times throughout the cigar, certainly enough to easily keep me interested. Construction was almost flawless and there was plenty of smoke. Add in the almost obscenely small price and the box-pressed Robusto is easily the most complete size in the line.