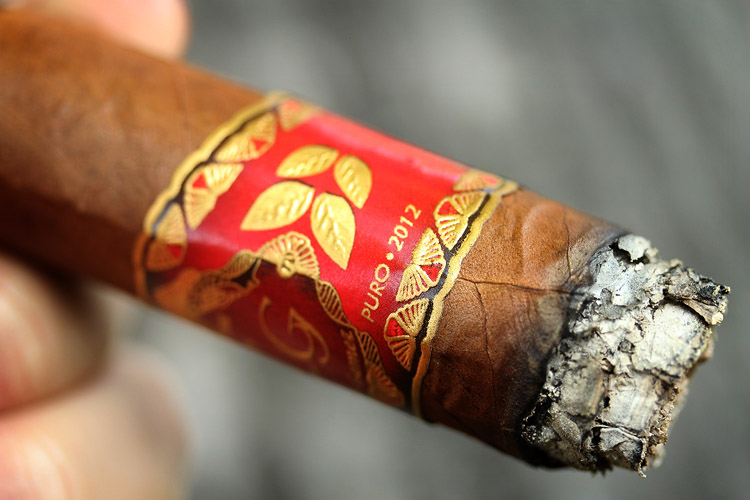 In February of this year, La Flor Dominicana announced that it would be adding two additional sizes to the portfolio of the Litto Gomez Diez Vintage line. One was a Robusto Extra called Paisano and the other was Galego, a name that was a not new to the Litto Gomez line. The Galego was introduced in 2010 as a 6 x 60 exclusive to the Davidoff of Geneva stores in New York and to date is the only single store exclusive of the Litto Gomez Diez. To complicate things even further, the two versions of the Galego are actually two different sizes with the older being 6 x 60 and the 2012 version coming in at 6 1/4 x 60.
The Litto Gomez Diez Vintage line was introduced in 2003 named after the head of La Flor Dominicana. Litto described the process of bringing the brand to life:

In 1999, We challenged ourselves to produce a cigar that was made entirely with tobacco grown on our farm. We knew it was a difficult task, because it implied growing our own wrapper. The investment was big and the risk too. But the most difficult part was the waiting. The process of fermentation and aging took more years than we expected. We tested this blend month after month for three years. Just to be disappointed because it was not ready but at the same time happy because we would taste the progress. Finally the waiting is over, today we can celebrate this great achievement. The flavor and complexity of the LG’s are everything that we anticipated. We hope you enjoy these great cigars.

Litto Gomez Diez Vintage is released annually with dates on the bands and now consist of ten standard vitolas: It’s large. It’s got a nice milk cocoa wrapper, although there are a bit more veins than average. There’s a slight box-press to the foot of the Galegos, but it’s still quite round overall. Aroma is nuts and cedar, medium, rather reminiscent of some of the old school La Flors. From the foot there’s cereal, grain and cocoa; very sweet and smooth. Cold draw is predictably open with some cocoa, aged tobacco, decent fruits and a heavy cereal note.

The first third of the Galego begins with grain and red wine notes that quickly shifts to a nuttiness with some cedar and a bit of sourness. Unlike many of Litto Gomez’s creations, there’s no pepper to speak of, at least not at the beginning. Eventually that changes with a great combination of cedar, nuts, a secondary caramel note and a mixture of red and black peppers dominating the profile. Similar to my comments on the aroma reminding me of some Litto’s less-talked about lighter creations, the Galego is also remarkably smooth and clean on the palate, but more so shockingly very passive. Into the second third and it becomes clear not a lot is changing. The pepper becomes a bit more detailed shifting to much more of a black pepper note, but the core is still the cedar and nuttiness. There’s a bit of a coffee note developing, but really the Galego’s changes are minimal. Unfortunately on this particular example, the cigar began to have issues burning consistently and began requiring touch-ups. The draw was always open, which isn’t terribly unexpected given the format, but it really doesn’t become a problem until the middle portions. The final third is much like the second, which means it’s also much like the first. One welcomed change is a ramping up of the flavors from the medium-full that it was for the beginning portions into a solid full. Unfortunately, the coffee note seems to go nowhere, although there are glimpses of caramel in one of the examples. After smoking two of these, I sort of know what’s coming and with a bit over an inch left, there’s not much point going on in my opinion. The Bottom Line: Outside of the ring gauge, this was actually pretty enjoyable. Besides the format, my largest issue with this cigar is the flavor profile, body and strength all combine into something a bit awkward. The Litto Gomez Diez 2012 Galego is strong enough that most will want to enjoy this after the meal, but features a flavor profile that, while strong, is quite delicate. Furthermore, the aforementioned passivity complicates manners even more and means that fans of Litto’s normal body of work might be a bit taken back. However, if you enjoy strength, large vitolas and are looking for a morning cigar; your answer awaits. Oddly, despite a series of things that still don’t make sense to me, this was quite enjoyable, enough that a five-pack seems in order.