As the tidal wave of buzz about new releases for the IPCPR 2012 trade show was steadily building, La Flor Dominicana released, somewhat quietly, a new take on the Litto Gomez Diez Small Batch No. 4, an oscuro version.

Oscuro, which simply means dark, is a word in the cigar industry that doesn’t have the same buzz or awareness that maduro, which means ripe, does—and for good reason: it’s a labor intensive process that simply isn’t done as much in the cigar industry. A quick search of some of the larger online retailers produced three to five times the number of results for maduro than for oscuro.

There is a lot that goes into getting an oscuro wrapper, but the basics involve taking leaves from the top of the plant that have been exposed to a significant amount of sun and as a result have begun the curing process while still on the plant. The curing process is generally shorter and less intense than for maduro—but leaves destined for oscuro status are aged for significant amounts of time which further darkens them, sometimes to the point of being nearly black. In the case of the Litto Gomez Diez Small Batch No. 4 Oscuro, Gomez moistens the leaves and squeezes the veins to the point where they break, releasing the leaf’s oils to naturally darken the leaf.

The other important reason this release was relatively quiet was the limited availability. Only 100 cabinets were made for the entire country, with one La Flor Dominicana representative saying that the allotment was around 12 cabinets per region/representative.

Here’s a look at the now five members of the Litto Gomez Diez Small Batch series (from top to bottom): 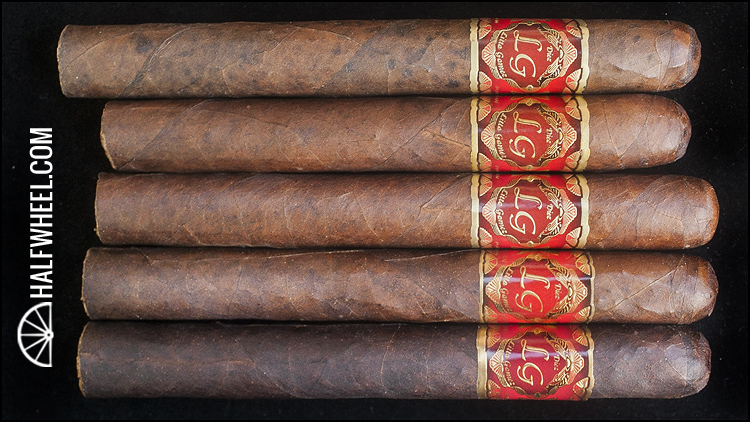 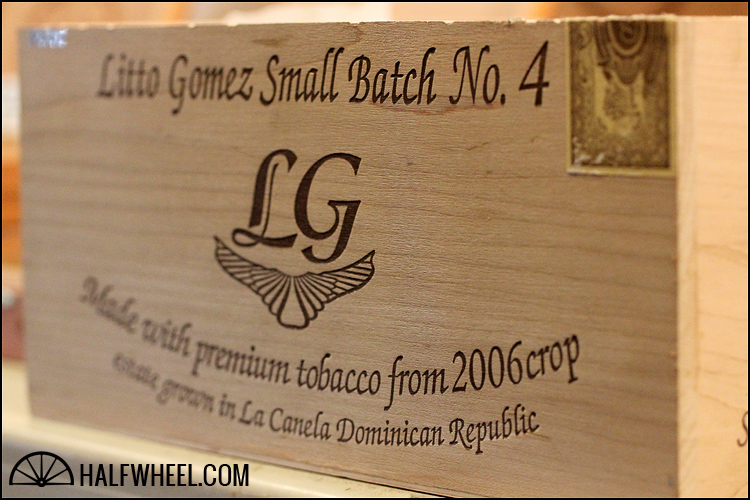 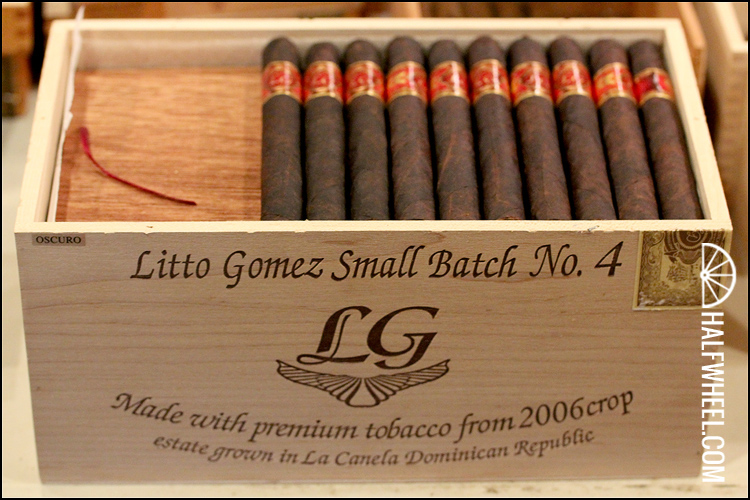 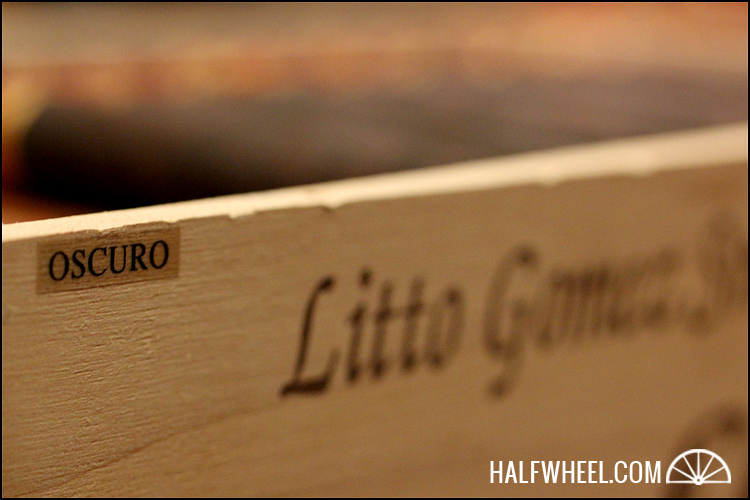 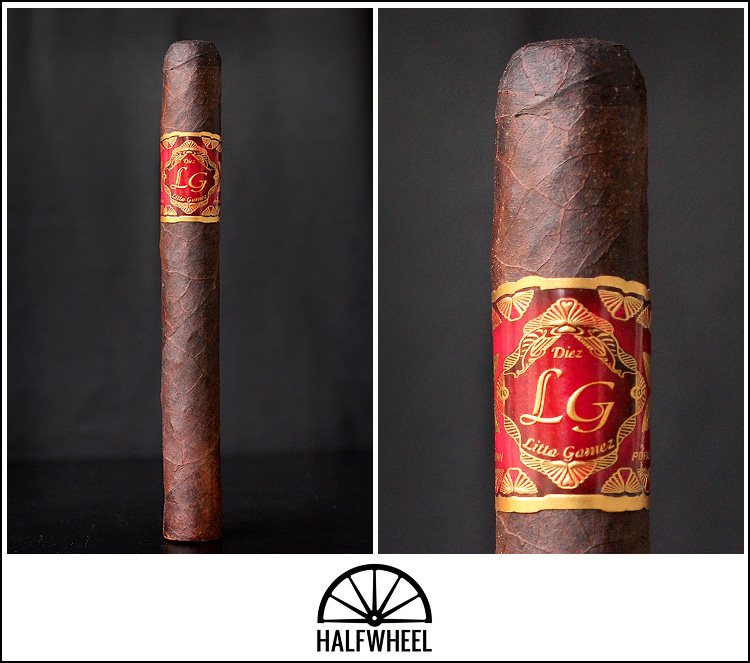 As you can see, the Oscuro is a bit darker than its counterpart. The first thing that caught my attention was the sweetness from the pre-light aroma: it’s thick and loaded with a fruit note that is reminiscent of a great pie–the first cigar was cherry, the second cigar was lighter and had more of an apricot or peach note, while the third had a warm apple note. The cold draw,  at least on the first cigar, is surprisingly firm with a bit of meatiness coming through. The second and third had a much easier cold draw, though flavors were fairly mild.

Once lit, the draw of the La Flor Dominicana Small Batch 4 Oscuro is fine—allaying any fears I had of having to suffer through a cigar with the draw of a frozen milkshake. The first third is marked by a complex, spicy flavor profile with some dry jerky and a healthy dose of pepper that isn’t as upfront as it is lingering—unless you retrohale, of course. There is some sneaky strength in this cigar—not an in-your-face pepper bomb on the palate, but it’s clear by the end of the first third that this might knock me back a bit. The ash is good, but not terribly strong, falling off without prompting just shy of an inch, though the burn line is sharp. 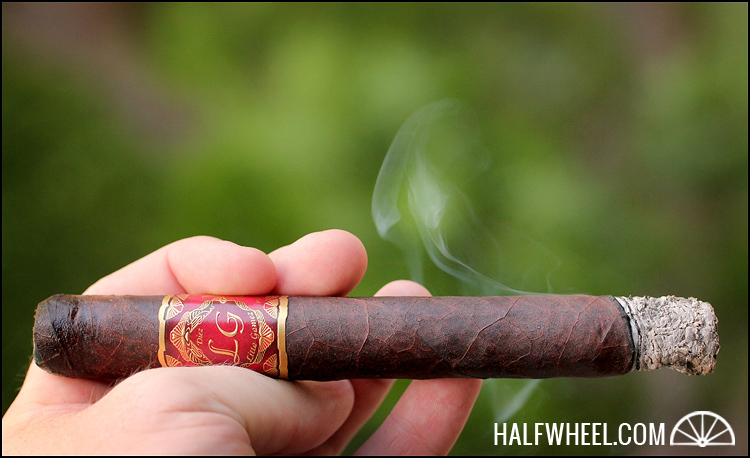 Moving to the second third, that bit of fruit note that was present on the pre-light aroma and in the first third has disappeared as the overall flavor profile keeps becoming more concentrated. I think of making a reduction as the best comparison to the way the flavors change–boiling a mixture down to make a set of flavors more intense. At the midpoint of the third cigar, the smoke has become downright incredible – with that concentrated fruit note, sweet wood and just a bit of meat. It’s like the chef’s selection at a five-star restaurant has just been brought to my table. 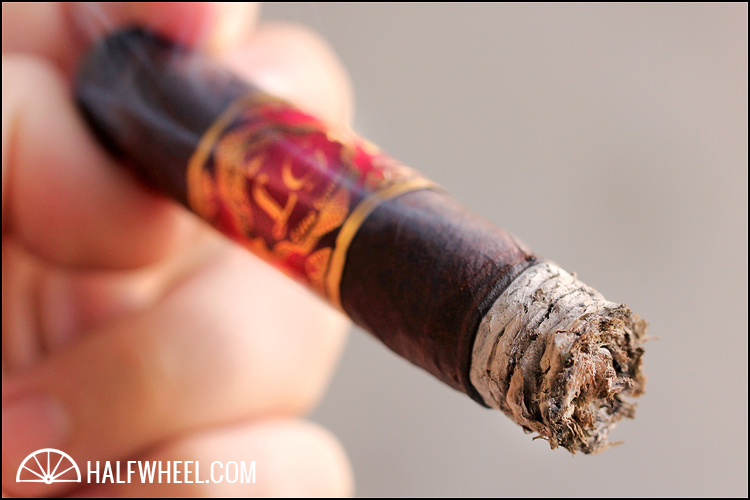 Moving into the final third, some terroir starts to show, as one cigar showed a chalky note, dropping the fruity sweetness for an airy, dare I say dusty texture in the mouth. There are points where the pepper starts to creep back out after being largely absent, particularly once the burn line crosses the midpoint of the cigar. A distinct change to a dry flavor profile signals another change in the final third, but as soon as that could be noted, a big hit of dry black pepper comes along and recharges the palate. The cigar burns all the way down to the nub with no extra heat or harshness. 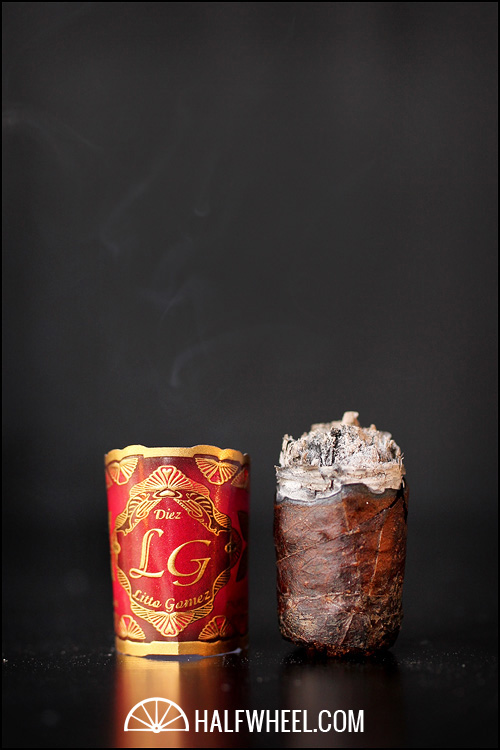 If you've smoked the Litto Gomez Small Batch No. 4, you have a general idea of what this cigar is about, but you're also missing a tremendous amount. The extra oil and sweetness the Oscuro process adds is a winner—and makes this the choice between the two, at least for my palate. It's not a cheap, overbearing sweetness; rather it is a thick, rich sweetness that fills in the rougher spots of the Dominican binder and filler and adds a level of complexity that you probably didn't realize the cigar needed until you actually got to try it. The technical performance is darn-near flawless, and the limited availability of these make them that much more desirable. Yes, it is a $19 cigar, but for those occasions when you have the time and peace of mind to enjoy it—it's well worth the extra coin.