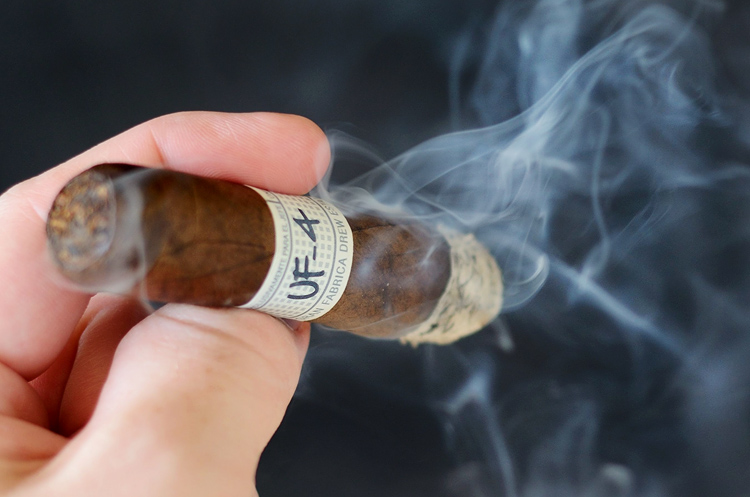 Having gone through a few iterations of names, this recent Drew Estate release was named the UF4. Back in 2010, Brooks reviewed the preproduction sample which was called the JD4. That preproduction cigar went on to be named the MF4, which was the official name for quite awhile. Towards the end of 2011 however, the name was changed to UF4 since the MF abbreviation was used by My Father. Charlie Minato’s news release in October 2011 explains the background of the UF4 in more depth.

That being said, this was JD’s personal favorite of the two so the factory continued to make them for him on a batch basis. The difference between this blend and the existing T52 is the amount of ligero in the recipe – this liga has more.

Jonathan Drew had originally planned to release the cigar under the MF banner, but a few months ago while meeting with Thor Nielsen of Cigar Press, the two realized that the “MF” on the band was also used by My Father. Jonathan decided to change the cigar to “UF” as a courtesy to the Garcías. The UF moniker stands for Único Fuerte and the MF13, another Liga Privada test blend, is now known as UF13. There are forty bundles of twenty-five set to be released at Casa De Montecristo on October 27th. Casa De Montecristo is being given these as a personal thank you for a favor the Khalils, owners of the shop, did for Jonathan a decade ago. The cigars being released were rolled two years ago and already banded. As such, JD asked the Padróns if he could have them repackaged at the Padrón facility in Miami. Jonathan said he was “a bit nervous about repackaging because they are two years old”, but after speaking with Orlando Padrón he was confident the cigars would be fine. Prices are the same as the T52 Parejo, which is the Toro size, $10.95 a cigar.

To date there have been six releases in the Liga Privada Único series:

It is very hard to describe the feeling of the beautifully dark brown wrapper—smooth and slightly oily, but very tough—almost like heavy card stock paper that was soaked in vegetable oil and dried. The cigar itself is very hefty and firm, almost on the side of hard. Testing the pre-draw however shows that the firmness of the stick does not equal a tight draw. The main note I’m picking up is a strong, sweet cocoa powder. The foot smells more like the sweet hay notes of a freshly cleaned out barn.

The Liga Privada UF4 starts out the first third with a sweet profile, one mainly made up of minor cocoa notes, cedar, and a slight touch of creamy coffee. Noticeably lacking is any pepper, but the UF4 billows smoke like any of the other cigars in the Liga Privada lines. For a brief moment there is a very distinct whiskey note to the cigar, which is odd since I’m drinking water. The burn is beautiful with the white-gray ash holding to about an inch.

The second third begins with the cocoa turning into full on milk chocolate. The cedar has gotten heavier as well, but is more of a secondary note. The burn continues to be spot on and the smoke production is still quite significant. While it is a bold cigar, it is very smooth and lacks any harsh notes.

The chocolate profile has only intensified in the final third. A cinnamon note with just a touch of spice has developed towards the end. There was no peppery bite to speak of throughout, however a little has developed. A little espresso has developed in the background. The overall sweet profile with chocolate as the dominant flavor finishes this cigar out as a flavor bomb.

In my opinion the UF4 is a great example of what I think a good cigar consists of. It starts off with a distinct profile and builds from there. The cigar takes the initial flavors and develops side notes as it goes along, ending up with a similar profile but having a bouquet of flavors at the end. As previously stated, this cigar produces a lot of smoke. Two I smoked outside and one I smoked indoors, which was almost too much. Seeing as how I smoke mostly outside though, this isn’t an issue. All in all I can easily suggest you hunt some of these down if you can find them. They are classic Liga Privada quality with a fantastic flavor profile that I enjoyed thoroughly.