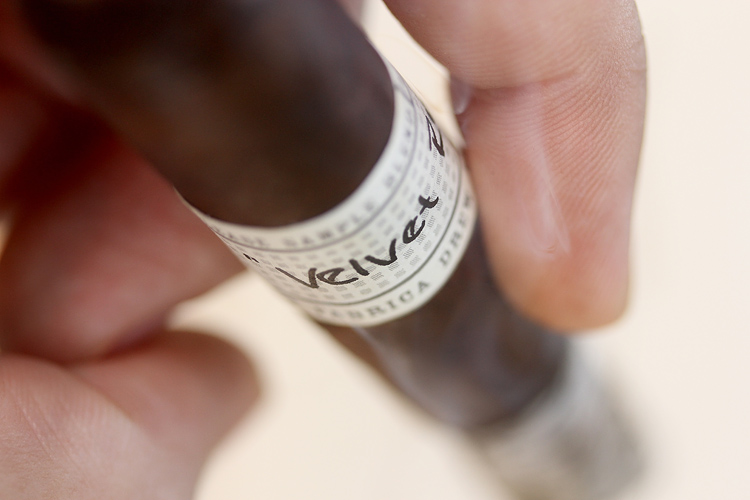 On October 19, 2012 Drew Estate held a special event at TESA Cigar Co. to sell Drew Estate’s newest Liga Privada for the first time, the Velvet Rat. Just 40 bundles of 10 cigars were offered as part of the “soft launch” with a full release expected mid-2013.

We covered the news a few weeks ago here:

Drew Estate’s next Liga Privada will debut in just over one week at an event at TESA Cigar Co. in Chicago, IL. On October 19, the long-time Drew Estate supporter will be the first retailer to receive the Liga Privada Único Serie Velvet Rat, the third play on the company’s original Único Serie release, the Dirty Rat. At 6 1/4 x 46, the Liga Privada Velvet Rat is identical in shape and size to the Único Serie Ratzilla, a cigar which was offered for sale for the first time earlier this year. Forty special 10-count prerelease bundles of the lighter and sweeter Velvet Rat have been made for the event at TESA with MSRP at $14.00 per cigar and $140.00 per bundle. The bundles can be seen in the following video below filmed at Drew Estate:

Given the extremely small release TESA will not be taking any orders, or pre-orders, over the phone and is even hinting at possibly limiting in-store sales at the event.

Steve Saka, Drew Estate CEO, first publicly mentioned the blend a few weeks ago, commenting only, “we just finished the blend a month or so ago…” Also in early September, a member of the BOTL.org forum showed off an alleged prototype.

At this time, the Velvet Rat is slated for a mid-2013 release.J onathan Drew explained the choice of TESA:

Believe it or not, there was a time in Cigar History that Drew Estate did not exist.  Hey, I know that sounds hard to believe, almost incredulous. “Dizzle, are you saying that Drew Estate didn’t run from Cuba with $17 and some Corojo Seeds and arrive in Esteli, Nicaragua …?”  That’s right. This PRE -DREW CIGAR time actually existed. And back then, we met a Sage Tobacconist from the Chicago Cigar Shop scene named John Kelly. Him and his wife cleared their IRA Account to lend us $20,000 right before I jumped on the flight that changed my life forever.
We are proud to have our Soft National Pre-Release for the VELVET at his family’s New Cigar Lounge – TESA Cigars. John’s Son, Chris Kelly, is the owner operator and has developed an outstanding relationship with premium consumers in the Chicagoland Area. We are amped up to do the release with Chris, who has been a friend since he was 14. He is all grown up now, and has a bad ass lounge in a hot area of Chicago.

The Velvet Rat was created to satisfy two of my personal cigar desires. The first being my longing for there to be a slightly creamier, more balance iteration of our Dirty Rat blend. Don’t get me wrong, I love what a little firecracker of pepper the original Rat liga is, yet I still found myself craving something a bit more tempered so I could enjoy it more languidly; relaxing with each long draw and exhale. My second want was for there to be a lonsdale added to the Liga Privada line as I find this vitola to be very elegant and a true pleasure to smoke. Why this size has fallen out of favor with so many smokers is a mystery to me and I am hopeful that the Velvet Rat will reintroduce them to the joys this format can provide.

Velvet is described “as cut threads that are evenly distributed, giving it a distinctive feel. ” This is the process we used in blending the Velvet Rat – even distribution of filler tobaccos for a distinct flavor – similar to the Dirty Rat, but toned down a bit—smooth like velvet.

When I say smooth it doesn’t mean it lacks strength or body. The spice is not as straight forward as the Dirty Rat (and) the length of the Velvet Rat and distribution of fillers provides for a smoother smoke.The blend uses a Connecticut broadleaf “high” mediums over a Brazilian mata fina binder and Honduran and Nicaraguan fillers.

The prerelease bundles for the soft launch use the craft paper made famous by MUWAT and are nearly identical to the Ratzilla bundles used over the summer. They look like this:

Velvet Rat is the ninth cigar to receive an official Único Serie band:

Here are the three released versions of the Rat, the latter two are unreleased, but have been sold in small quantities:

Without knowing what the wrapper was, I wrote in my notes “looks browner than DE’s typical broadleaf.” That holds true, although the Velvet Rat’s wrapper also provides a great bit of reds. Overall, it’s a bit awkward of a size for someone who has smoked through bundles of Papas Fritas, but it’s also not my beloved Lancero. In addition, the Velvet Rat is heavy, although not overwhelming. Aroma off the wrapper is a great sweet cocoa with a dominating sweet barnyard over leather. Medium-full to full and smooth. From the foot, there’s smooth cocoa, leather, earth and some pepper, all extremely complex. The cold draw is open with distinct sweet cocoa notes, earth, big leather, touches of pepper and some fruitiness. It’s kind of a confusing plethora, but the smoothness makes it work.

The first third of the Velvet Rat starts with a sweet brownie cocoa, almost like a No. 9, but so much sweeter. In addition, there’s caramel, leather, touches of a contained pepper and a gigantic coffee note. It’s medium in body and strength, but the flavor is on the south side of full with an incredible deepness. Eventually, the flavor materializes with the sweet brownie cocoa, sweetened coffee, leather, creamy earth, strong and acute black and red pepper mixture on the back of the throat. The pepper is the most recognizable note, but it stays in the lower part of the throat with absolutely zero sign of changing. Strength and body remain the same, while the construction is signature Liga Privada — lots of effortless smoke.

Into the second third and the sweet cocoa is still dominant with some earthier notes fading in and a syrupy mocha note now in place of the coffee. Halfway through and the pepper begins declining as some aged leather makes its way in on the retrohale. For a few minutes, there’s an interesting red wine and floral note. On one sample it was a few puffs, on another it lasted a dozen or so — never dominating, but nevertheless enjoyable. Midway through, it’s it still shocking this is a full-flavored, medium plus-bodied, medium-strength and buttery smooth Liga Privada.

While the cocoa is declining, it’s still the dominant note of the Velvet Rat. In addition, the coffee note returns, along with sweet dark tobacco, leather, licorice and earth. There are touches of pepper, but at this point it’s safely receded. As for the rest of the Drew Estate-made product, much remains the same: medium strength, medium plus-bodied, full flavor and flawlessly burning Liga Privada.