It’s been a long wait, but Drew Estate is finally ready for the national release of perhaps its most anticipated Liga Privada ever, the UF-13 Dark. Way back in early 2011, I smoked the first of what would end up being quite a few reiterations of a blend that Liga Privada was working on, dubbed the MF-13, a Robusto-sized cigar that was based on the much loved T52.

Drew Estate President Steve Saka had this to say about the progression of the blend:

T52-4 was the final head to head blend that was competing internally with T52-3 to become the T52 final blend. T52-4 was exceptional, in fact JD and I both liked it a slight bit better, but we were concerned that it tended to overpower some of the nuances in the liga and that we were sacrificing flavors for strength, so we ultimately decided that the T52-3 would be the final T52 blend.

JD for his own smoking pleasure kept having T52-4s made, but we banded them as JD4 so as to not cause confusion in the factory or with those he shared them with. After he started handing them out, he decided that he didn’t like putting his personal name on the product, so we started ringing them with MF-4 – it stood for what you think it does. In the factory we kept tinkering with the T52-4/JD4/MF-4 blend to try to improve it (in our opinion) – goal was to keep the octane, but restore the depth of flavors… so we made a variety of minor liga tweaks and vitola changes to try and get it “perfect”.

The result was the MF-13 – a robusto format. I think the MF-13 is better, not sure where JD stands on this – truth is the difference is so very minor between the two cigars I doubt most folks could even tell there was any difference unless they smoked them side by side… and maybe not even then, but we can tell… or so we tell ourselves.

We started sharing both MF-4s and MF-13s at events and out of our pockets and they started to get some buzz online.

So MF-4 = UF-4 and MF-13 = UF-13. Netiher (sic) blend is really in testing per se, both are finalized blends. It just that neither is being produced for retail at this point. We would like to release the cigar this year, but can’t commit to doing so until we are confident we can get T52, Dirty Rats and L40s delivered on a regular basis to our customers as the UF-13 shares the same Stalk Cut Habano capa.

The MF-13 has been through two name changes since 2011, first to UF-13, a change that came about due to confusion with My Father. (The UF stands for “Único Fuerte” ) There was also a wrapper change early on away from the T52 wrapper. And finally, a few sizes and caps have been used, Robustos anywhere from five to five and a half inches with a ring gauge around 52.

This is a pretty simple explanation – until mid-last year the “13” blend was always just sample lots and small batches – never made steady day in day out – and one time the made them the wrong length… I didn’t really care at the time and I can’t even recall if it was too long or too short… been awhile, over a year or so… so cigar wise the only difference is the length by 1/2.

We broke the news that the UF-13 would be shipping in March in a news story last week:

The details for Drew Estate’s highly-anticipated Liga Privada Único Serie UF-13 Dark are now finalized. As we noted last September, the UF-13, a stronger Liga Privada previously reserved for events and other special purposes, is on track for a release this spring.

While the cigar itself hasn’t changed since that article, the name now reads, “UF-13 Dark”—a moniker Drew Estate CEO Steve Saka noted he liked last year while commenting on halfwheel’s article. The reason behind this is an ode to the specific “high Broadleaf Mediums” used for the cigar.The UF-13 is a three-year project for Drew Estate that has seen numerous iterations, vitolas and names, although Saka has noted that the prerelease versions for the last two years have been the same blend as the production UF-13 Dark, which features the aforementioned Connecticut-sourced wrapper, a Brazilian Mata Fina binder and Honduran and Nicaraguan fillers.

Saka told halfwheel that the UF-13 Dark is currently expected to ship to all Liga Privada accounts in late March as part of a larger shipment and then will have limited availability thereafter, similar to Liga Privada Único Serie Feral Flying Pig.Officially, the size has changed to 5 1/2 x 52, although that change, up from 5 1/4 inches, is likely to due to the unique cap. Pricing is set at $13.95 per cigar with boxes of 12 retailing for a suggested $167.40. The configuration of the boxes is similar to Drew Estate’s Flying Pig boxes.

Here are all of the cigars in the Único Serie, from left to right:

As mentioned above, there have been many different versions of the MF/UF-13 over the years, with quite a few different bands as well. Below is a sampling of what I had laying around of the same blend. From top to bottom: 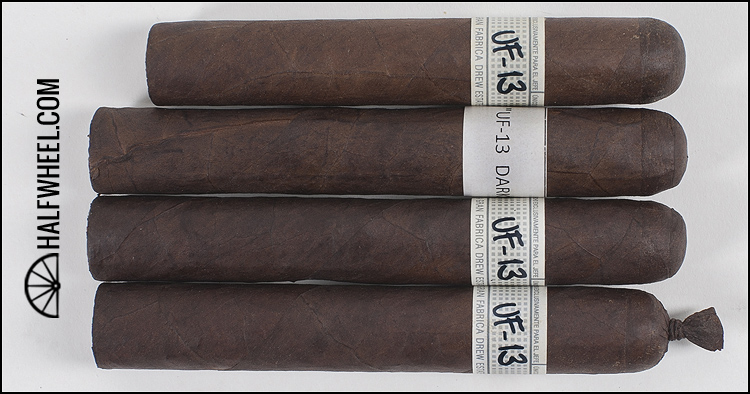 The production boxes for the UF-13 Dark look like this:

The UF-13 is a gorgeous cigar with a very dark, almost blackish brown wrapper that glistens with oil up and down its length. The cabeza colita cap is a sight to behold, and the first time I saw it, I wondered how long and how much effort each one of them took to produce. The wrapper is chock full of veins, but is slick to the touch. It has the perfect give when squeezed and the aroma off the Broadleaf is a combination of barnyard, coffee, leather and black pepper.

The first third of the Liga Privada Único Serie UF-13 Dark starts out with strong flavors of espresso, oak, leather and a meatiness that is hard to describe accurately. There is a great chalky coca note in the background that is quite strong at points during the first third. In addition, a generic caramel-like sweetness comes and goes. While there is not much spice on the lips, there’s a strong black pepper. Both burn and draw are fabulous so far and the smoke production is absolutely insane: white, billowy and copious. Overall strength does not change much over the course of the first third, starts and ends at a solid medium.

A very sweet malted chocolate note takes over the cocoa flavor as the second third begin—it’s extremely obvious to the palate. Other notes of leather, peppery earth and even a slight nuttiness are evident at different points. There is still some very nice black pepper on the retrohale, as well as an interesting Worcestershire note. The overall strength is increasing noticeably and ends the second third, almost—but not quite—at the full mark. Construction remains excellent, as does the smoke production.

The final third of the Liga Privada Único Serie UF-13 Dark seems to combine all of the flavors from the prior two thirds together: dark chocolate, peppery earth, oak, leather, cocoa and nuts flit in and out a different points. While the malted chocolate sweetness from the second third has decreased a bit, is still a major player in the profile. Both the black pepper on the retrohale and the spice on the tongue remain at fairly constant levels. The UF-13 Dark continues to billow out smoke like a freight train while the burn and draw continue to be excellent to the nub. By the time the cigar is put down strength is solidly in the full category.