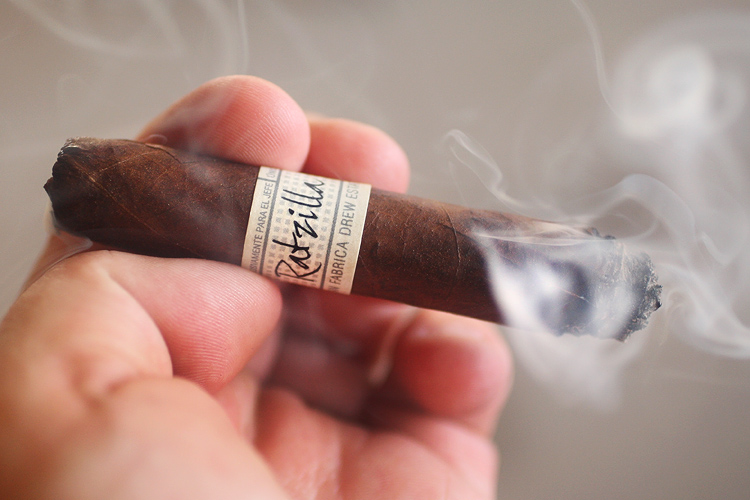 Liga Privada is forever working on new blends, and new vitolas of old blends, and that is how the Ratzilla came to be. While looking to make a (somewhat) larger version of the insanely popular Dirty Rat, quite a few different sizes were tested before they settled on a final size of 6 1/4 x 46.

While the Ratzilla was handed out to select people at the IPCPR show in Las Vegas in 2011 and as preproductions before that, it was still not ready for primetime due to a couple of different factors. First, the demand for the Dirty Rat was already insane, and they did not want to exacerbate that issue. Second, there were apparently issues with the wrapper burning incorrectly on the Ratzillas.

(Burn issues) is why we had to let the Capa (wrapper) age more,” said Drew Estate, co-founder of Drew Estate. “It needed more time to cure.”

The wrapper used on the Dirty Rat is grown in the Connecticut River Valley and while it resembles Broadleaf, which is used on Liga Privada No. 9, it is actually the same Habano-seed wrapper that is used on the Liga Privada T52. The binder is Brazilian, and the filler is a mix of Nicaraguan and Honduran tobaccos.

Like the Dirty Rat, the Ratzilla is a release in the Único Serie, which is basically a group of specific vitolas produced in the Drew Estate factory using blends that are different from the standard Liga Privada No. 9 or the Liga Privada T52 blends.

At this point, we have made 200 or more Liga Privada blends… There are probably nine or 10 of them so far that are exceptional. They’re cigars that work as a particular size, such as a Lancero or Corona, with the blend being unique to that particular vitola. The Dirty Rat is a great example of this…

The Ratzilla will be sold for the first time at an event today at Casa de Montecristo in Chicago. There are said to be only 50 bundles of 12 being released at the event, so they won’t last long. There will be no phone orders taken for the Ratzillas at this event. 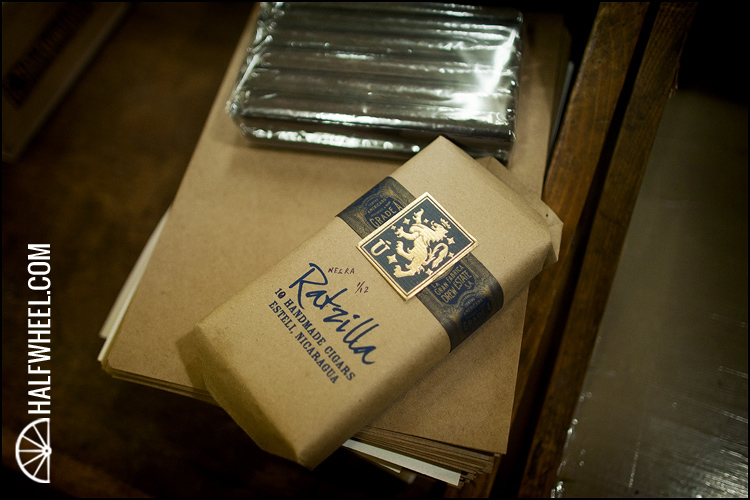 The Ratzilla itself is a great looking cigar with an oily mocha brown wrapper that is fairly smooth to the touch and has some veins noticeable. Like the Dirty Rat, there is a pigtail on the cap and the wrapper smells strongly of spices, sweet leather, cedar and coffee. There are no soft spots and it looks to be perfectly rolled.

The Ratzilla starts off the first third perfectly with just the right amount of spice on the tongue, as well as flavors of leather, slightly bitter espresso and earth. There is an undercurrent of a sweet floral note, but it comes and goes, and is never very strong in the first third. Draw is perfection, as is the burn, and there is quite a bit of smoke production. Strength starts off a solid medium, but is only getting stronger, albeit fairly slowly.

Both in terms of flavor and spice the Ratzilla mellows out in the second third. However, while the small amount of spice that was present from the first third disappears almost completely, there is still a really nice black pepper note on the retrohale that continues to go strong. The flavors, while a bit more muted, are still quite distinct with the same earthiness, espresso and floral sweetness, along with some added creamy coca reminiscent of a dry coca powder. Draw and burn are excellent and the strength is getting stronger as expected, and ends the second third just shy of full.

The final third of the Ratzilla sees the flavors gain back their former distinctness from the first third. Notes of dark chocolate, earth, cedar, and of that floral sweetness dominate, but the profile has quite a bit less bite, and more creaminess present. The spice and black pepper are reduced overall, but are still major players. Construction is wonderful and the strength of the cigar ends as a solid full, although it never gets harsh.

The Ratzilla is said to be just a slightly larger and longer version of the Dirty Rat, and while the blend may be the same, honestly, that is just not really how it tasted to me. While there are definitely similarities, especially in the earthiness that is present, the Ratzilla is fuller, creamier and a tad bit sweeter profile wise while the Dirty Rat has quite a bit more spice, just short of harsh, on the lips and tongue. I enjoyed the Ratzilla immensely, but do not smoke this thinking that it is going to be nothing more than a larger Dirty Rat, as it has a profile all its own. Having said that, if you see them, and you love the Liga Privada profile, you should buy every single one you can get your hands on.