Today is the story of two very different Lanceros born from the same mother, in the same factory and conceived around the same time. One has been smoked by a few individuals and seems destined to be the next regular production sensation from Drew Estate. The other? Like many Lanceros made in ultra small quantities, made for a friend of Drew Estate, another code in the long-list of actual Drew Estate prototypes few will ever know about, let alone smoke. The one you know about, or at least may know about is the Liga Privada Único Serie L40, the one you may not know about? Today’s Smoke The logical response every time the cigar world gets a new Corona that is a bombshell is to… ask for a Lancero. (Look out Quesda, I want an España Lancero.) It happened last summer with the La Aurora 107 Corona and then the La Aurora 107 Lancero… It also happened with Drew Estate, who introduced the almost unanimous award for best Corona of 2010, the Único Serie Dirty Rat. Drew Estate President Steve Saka explained:

The lancero blend was one we struggled with for well over a year. It is probably one the most tweaked of all the LP blends to date in its final phase… it was a real challenge to make something that was IMO LP-worthy in this format. What LP-Worthy means, is that I personally love the blend and will smoke it regularly by choice. That is kind of tough when I am not really much of a lancero fan myself. My issue with lanceros is that they basically come in one of two varieties: Mild or Strong and in both cases, with very little depth. I am not saying I can not appreciate a lancero on occasion, but the LP line has always been about it being a cigar that I would smoke back to back to back – something that I really enjoy. The LP Lancero blending after about the sixth month kind of broke up into two distinct directions – one being a real peppery blend, the other being a more balance nuanced blend. Ultimately I abandoned the ultra peppery version, not because it was bad, but it was falling into that single note trap I mentioned before and it wasn’t nearly as good as a Dirty Rat or if I wanted something longer, a Ratzilla… so we began to focus on making it more elegant, balanced with more complexity. Now don’t get me wrong the L40 is not a mild cigar, on a strength scale I would put it at a 7 out of 10, but it certainly isn’t as peppery as the DR. Now what it is though is very complex and nuanced, there is a lot going on in this lancero, more than I have experienced in any other. Now I will admit I had to cheat a little bit… instead of it being a 38 ring, it is a 7 x 40 ring – yes that little bit of extra girth afforded me one more tobacco in the recipe. Hence the moniker “L40″

This cigar was made for a friend of the factory to honor an important moment in his life. There are no more than two-hundred of these known to be in existence, or at least were in existence. After a lot of difficulty, I was able to procure one of these. From everything I’ve gathered, these are one of the many blends used, with the notable difference being the 7 x 38 size and the obvious change in blends. I’ve been told this is the other route from what the L40 would become, as the person who this was created for asked for a Dirty Rat in the Lancero format.

One thing that becomes apparent in the above pictures is what happens when you compare a prototype versus a prototype. The EV-10 is an actual prototype. The L40 is a regular production cigar with a different band. Comparing them isn’t even close. The EV-10 is rough, crooked and not something you could present to consumers, a far cry from the L40. Moving beyond that, this rendition of a Liga Lancero has a noticeably lighter wrapper than the L40 with great reds and black spots. Aroma is an aged leather with some nuts in the background, medium. Packing is only a bit looser than the L40, although there are less tobaccos present. Aroma from the foot is sweet dark nuts, cinnamon, saffrons, a touch of coca, berry and woods; medium-full. Lighting
Once again, nothing fancy to the cap. From the head, full with spices and lots of lemon sweetness over earth. The cold draw is like the L40, awesome in terms of tightness. Flavor is spices, sweets, nuts, earth, touch of cocoa and hickory; albeit not complex. It’s an interesting cherry wood and toastiness aroma that the smoke gives off while lighting, a bit of spices as well. The initial draw from the EV10 is a sweet cherry into spice cedar with a pepper finish; medium and medium-long. First Third
The Liga begins with an abnormal undertone of sourness while a syrupy cedar takes the forefront with some pepper. Like the initial flavor, the finish of the EV-10 is relatively straightforward: cedar and spices, a similarly sourness and a coffee aftertaste that rounds out the lengthy finish. The draw on the 38 RG version is excellent and the smoke production is equally as great. Strength is by far the lightest of any Liga I’ve had, medium-plus, but no real complaints as far as nicotine goes.

Second Third
The EV-10 actually deepens in flavor with cedar, detailed woods, earth and a touch of sweetness at the full mark, but it noticeably lacks the spiciness of the first third. Finish is aged cedar, woods, syrup and a bit of harshness, a lighter full and medium in length. Draw remains the same as the cedar aroma is still dominating the air thanks to great smoke production. Strength picks up to medium-full, although still not fully in what is Liga range. The medium ash struggles beyond a half inch, reminiscent of the first third. Final Third
It’s a bit harsher with oaks, dark tobacco and a toasty note at medium-full. Finish is oaky with dark tobacco; once again full in flavor and medium in length. Everything else remains much of the same: great draw and burn with no touch-ups required throughout the entirety of the Lancero. Strength settles at medium-full, rounding out the lightest of Liga Privadas I’ve smoked. An hour and forty minutes in, I put down the EV10 and think. 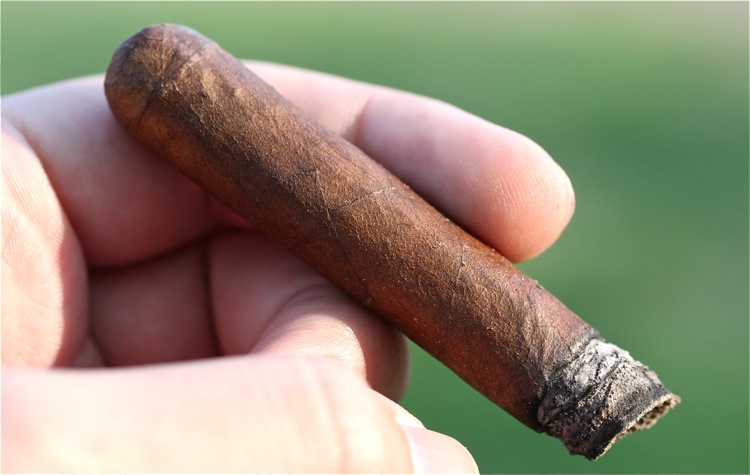 For the Novice
While it might be the lightest Liga Privada I’ve smoked, it’s not a novice-approved smoke. I’ve been told these might get better with age, which makes a bit of sense given the harshness, but I doubt these will ever be novice-friendly, probably a good thing. In the End
Let’s get straight to the point: is this better than the L40? No. The L40, while lacking the spice that I wanted, has way more flavor. This has a bit of spice up front, but the EV10 seems to lose it by the midway point. I do like the EV10, I just don’t like it as a Liga Privada. I’m not sure what it needs, maybe just a pigtail, but this is far from the Dirty Rat in Lancero form, which is a shame, because that would be as James Suckling would say, “the bomb.”