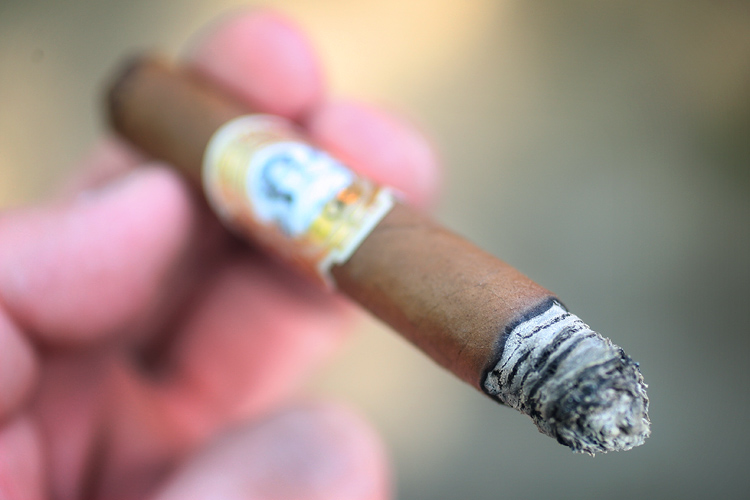 In June of this year, La Palina announced a new vitola in its Collection Series. The Goldie is a 6 x 38 petit lancero,named after Goldie Drell Paley, who was the wife of the founder of La Palina cigars Sam Paley.

Here is a little bit of history about the La Palina brand from its website:

The Congress Cigar Company and its leading brand, La Palina, had its beginnings when Samuel Paley emigrated from the Ukraine in the late 1800s. Arriving in Chicago, Sam obtained work at a cigar factory as a lector – an individual who reads novels, magazines and newspapers to the cigar rollers in the gallery.
His interest in the tobacco industry grew, and Sam devoted his personal time to studying cigars, the nuances of their blending and the tradition of their manufacture.  His efforts and knowledge were quickly recognized by his employer, and Sam was promoted to roller and then blender.In 1896 Sam opened a cigar shop of his own in Chicago with an adjacent factory that he named Congress Cigar Company.  Their first product was La Palina, in honor of his wife Goldie Drell Paley.
Sam was a turn-of-the-century master craftsman and would sit in the window every day rolling cigars.  La Palina was his passion, and Sam was a true artisan who believed in quality, excellence and perfection.
Congress Cigar Company moved to Philadelphia in 1910, and Sam’s son, William S. Paley, joined as Vice President of Advertising after his graduation from the Wharton School of Business. Enamored with radio, William sponsored a small radio show in Philadelphia called “The La Palina Hour”.  The advertising increased sales of La Palina and convinced young Paley of the value and potential of radio, leading him in a new direction.  William’s subsequent purchase of five radio stations in Philadelphia was the inception of his Columbia Broadcasting System (CBS), known as “The Tiffany Network” for the quality of its programming and its journalistic excellence.
Ultimately, Congress Cigar was liquidated in 1926, after Sam’s retirement.William S. Paley learned about quality from his father and through his experience with La Palina and Congress Cigar.  Those values would guide the Paleys for the next three generations and would take Bill Paley back to his roots, and the resurrection of the La Palina brand.
The revival of La Palina was driven by Bill Paley’s desire for a signature luxury cigar for the Lightbourne House, the fabled Paley family retreat in the Bahamas.
Following his grandfather’s dedication to excellence and his parents’ attention to detail, Bill began a journey to revive the all-but-forgotten La Palina brand.  He dedicated himself to creating a cigar emblematic of the original La Palina.Bill’s quest for the extraordinary took him to Avelino Lara, the expatriate Cuban Master Blender who created the famed Cohibas for Fidel Castro.  Lara had abandoned Cuba and was heading Enrico Garzioli’s factory at Graycliff in Nassau.
With the acquiescence of Garzioli, Bill worked directly with Lara to create a cigar that appealed to his discriminating palate.

The Goldie is a unique specimen for a few reasons, but the main one is that each and every cigar in the release was rolled by master roller Maria Sierra, who was one of the first women trained to roll cigars in Cuba, and who started her career at El Laguito, where Cohibas are produced, in 1967. Maria was trained by both Avelino Lara, who created the Cohiba blend, and Eduardo Rivera Irizarri, who was Fidel Castro’s personal cigar roller, and is a category nine roller.

The La Palina Goldie is rolled at the El Titan de Bronze factory in Miami, and the blend includes medio tiempo leaf, the highest priming found on only some tobacco plants. 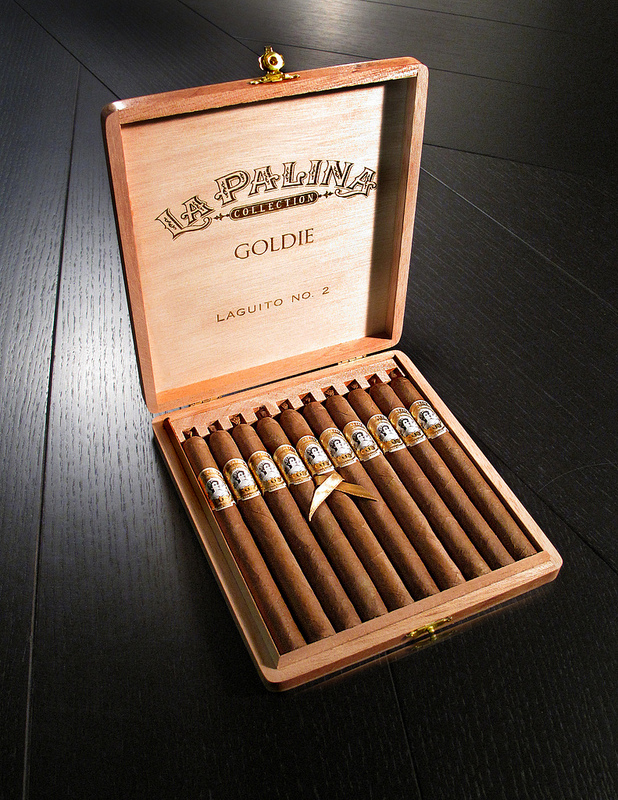 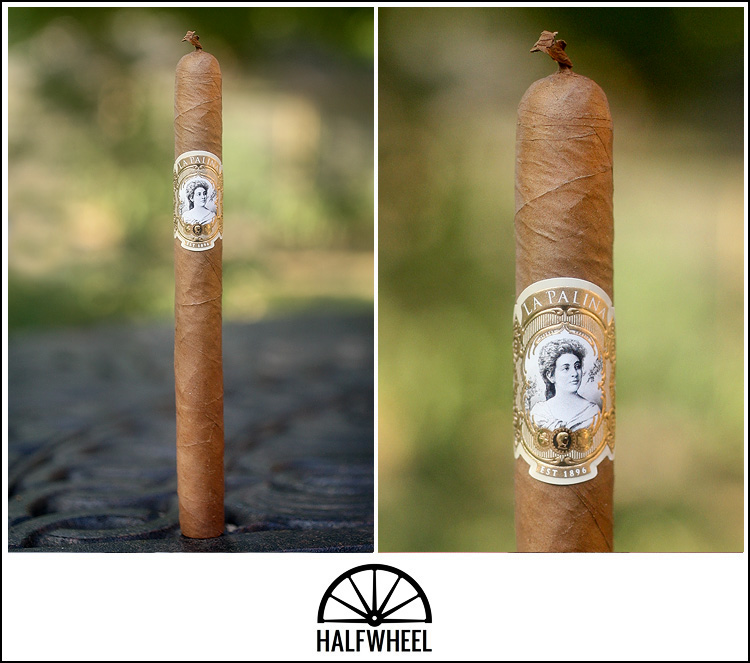 The La Palina Goldie Laguito No. 2 is an obviously well-rolled cigar with gorgeous light cinnamon brown wrapper that is smooth to the touch. There are some veins present, but they are not overly distracting; the triple cap and little flag on top are nice touches. It has an ideal amount of give when squeezed, and the wrapper smells like hay, wood and sweet fruit. However, the pre-draw is amazing with notes of what I can only describe as banana.

The first third of the Goldie starts off with an assault of flavors: honey, nuts, banana, leather and coffee all vie for a dominant spot in vain. It’s extremely creamy overall and does not seem to be losing any of that as the third continues. There is some slight spice on the tongue—just enough to affect the profile and there is also a surprising amount of pepper through the retrohale, although it is almost nonexistent in the mouth. As you would expect from an expert roller, the burn and draw are the epitome of perfection and smoke production is average. Strength starts out the first third at a mild-medium, and while it is getting stronger, it is not doing it very quickly. 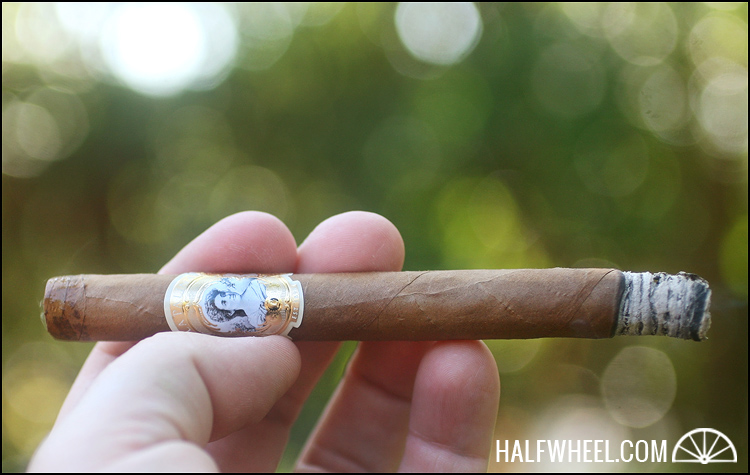 Coming into the second third of the La Palina, the banana note that was so strong in the first third has started to recede a bit to more of a general sweet background note. The profile is still quite creamy and at right around the halfway point, the pepper on the retrohale kicks up a huge notch that continues well into the second third. Flavors continue to shift back and forth, with cinnamon, nuts, white chocolate and coffee leading the pack. The construction of the Laguito No. 2 remains amazing, and the strength bumps up to a slightly stronger than medium by the end of the second third. 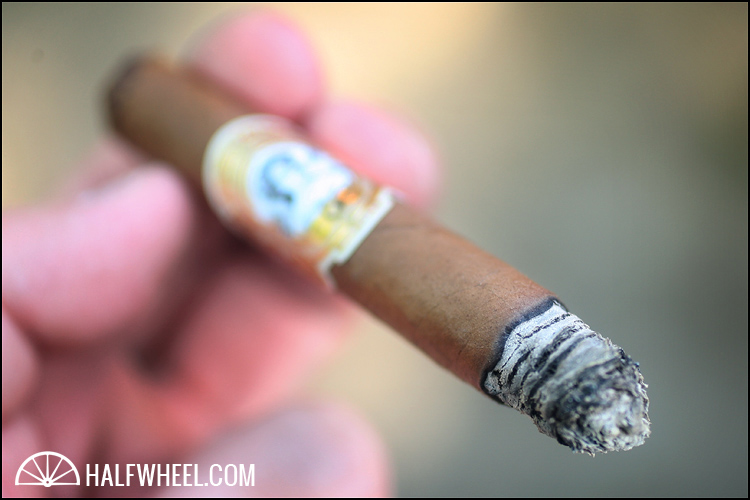 The final third of the La Palina Laguito No. 2 sees an increase in spice on the tongue and a decrease in pepper on the retrohale. Flavors continue to impress with the creaminess and sweetness remaining at around the same levels as the second third. The main difference is the strength, which surprises me by hitting the full mark by the end of the cigar, albeit just barely. It’s extremely easy to nub, and did not even get close to warm at the end, as you can see by the nub on one of my samples. 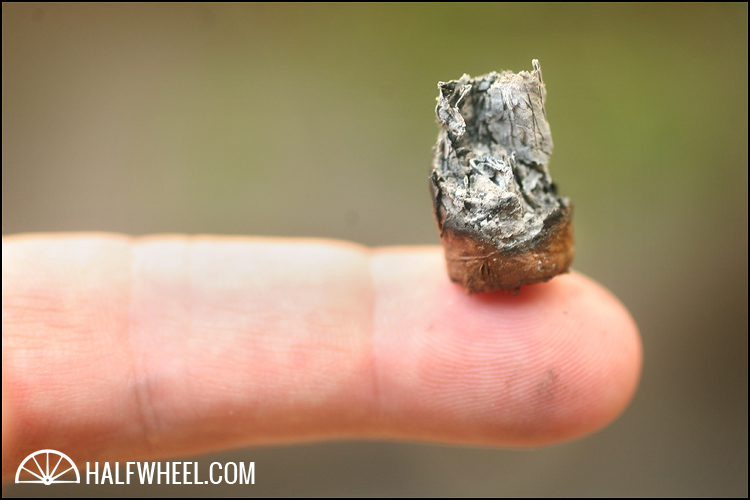 I have to say, although I find the El Diario line a little weak, I have been really loving some of the recent La Palina releases. The Kill Bill is a very good cigar and a wonderful vitola, and the Goldie is even better. The cigar is a flavor bomb, extremely complex, expertly rolled, amazing construction and is just a joy to smoke. Easily one of the best La Palinas I have smoked. Yes, they are almost absurdly expensive for the size, but honestly, there’s something to be said about the historical factor. If you have the money to spend, and love close to full-bodied, complex and full flavored cigars, you will not be disappointed.