There wasn’t a ton of fanfare for the release of Dion Giolito’s latest cigar, La Grand Classe, when it came out in late November. A Tweet from FUMARE was sent out the morning it became available, and as of this writing it has yet to be mentioned on the Illusione Twitter account since being released on November 27. The cigar is a store exclusive for FUMARE, the store that Giolito owns in Reno, NV.

The project has been mentioned on the FUMARE website since at least November 2011, and seemed to be slated for release in July 2012 before being pushed back to November. Giolito had kept details about La Grand Classe to an absolute minimum prior to its release, including how it would be distributed and reasons for its delay. He did hand out unbanded cigars at Charmed Leaf’s August 2012 boutique cigar party during the IPCPR convention and trade show, hinting that they could be possible prototypes.

Another aspect about this project that has seemingly been in flux is the name. It’s been referenced with several spellings, and the box that the cigars come in uses two different spellings: the main sticker says La Grand Classe while the secondary sticker says La Grande Classe. There was a point when this was referred to as Le Grand Classe, at least via previous logos, and currently the FUMARE site also makes reference to Le Grande Classe.

The name translates to roughly ‘The Great Class’ from several languages, including French, Italian, Latin and Spanish. There is also usage of the phrase pauca sed bona in the artwork, which Google Translate returns as small but good in Latin. The phrase has also been added to the tax stamp, replacing the word Nicaragua that had been shown on a previous version.

“Many unique tobaccos can be sourced. Some yields can produce cigars in the millions, whereas some of the most desirous, exquisite and flavorful tobaccos sourced can only produce just a handful of cigars.” – Dion Giolito — illusione cigars

Like many rareities in gem market, so is La Grande Classe Cigars – an exclusive of F U M A R E . Each batch of exquisite cigars will be a limited run of sizes and blends created by lauded blender Dion Giolito. All tobaccos will be personally chosen from the finest fields in Nicaragua, graded and aged for superior performance.

La Grande Classe gives the client unprecedented access to a true small-batch run of cigars made with superior grade tobaccos in both unique sizes, and different flavor profiles. Le Grande Classe is an extremely rare product at the highest caliber of performance, flavor and construction.

La Grand Classe comes in one of the most dressed down forms of packaging to date. There’s a simple cardboard box with a tax stamp that contains 25 unbanded cigars in cellophane that are labeled, “La Grande Classe.” Here’s what the box looks like: 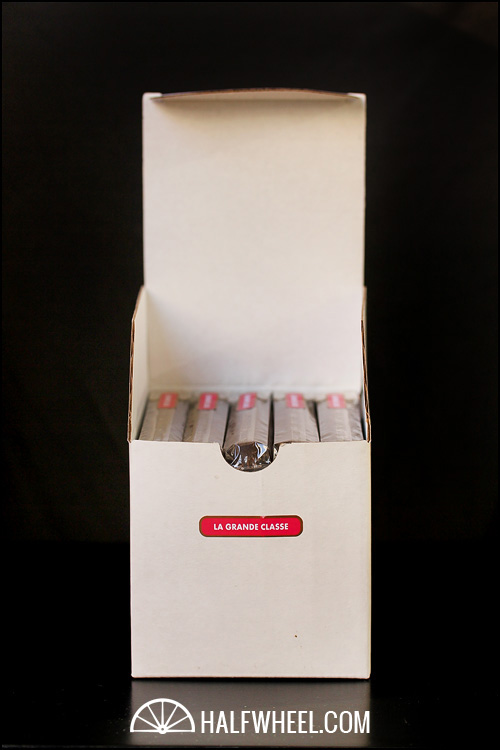 The color of the La Grand Classe’s wrapper is the first thing that caught my attention as it seems to have an almost grayish tint to it. Its dry, rough textured leaves have a few small veins—visible but not distracting—and the cigar is borderline hard when squeezed. The foot is floral and fragrant, sometimes smelling more like a fresh fruit salad and other times leaning more towards flowers, though both come with a fair amount of pepper. The cold draw is spot-on with the air moving well through what feels like a well-packed cigar and carrying a slightly sweet note reminiscent of yellow apples, a bit of pear, some white toast and just a sprinkling of pepper.

The La Grand Classe gets off to a quick start as the first third has plenty of earth, spice and eye-watering pepper in the first puffs that evolve into notes of brown sugar and baking spices that hit the nose more than the palate. A good amount of blue-grey smoke comes off the cigar as the flavor finds its balance and becomes a bit more Illusione-like in the first inch. An earthy flavor sets in as the burn line gets to an inch, and it’s apparent the flavor is fading fast. The earthy note gives way to a lighter wood note as the transition to the second third seems to begin. There is a decided mellowing of the flavors by the time the cigar gets into the second third, with an almost marshmallow like flavor coming out in one cigar. The intensity of the flavors has died down significantly, particularly when compared to the first few puffs, as the earthy taste is a thing of the past, and even the wood note has faded largely into the background. It’s not until just past the midpoint that notes of pepper and earth start to come back, just as it seems like the La Grand Classe was turning into an almost mild cigar. The final third brings a gradual increase in flavor, though at times it gets a bit gritty as the levels of earth build back up. In the first cigar smoked, there is a sharp metallic taste that comes out of nowhere with about three inches to go, though it fades quickly and is replaced by a strong, peppery closing note, bringing the La Grand Classe almost full circle from where it started. There's an understandable desire to compare La Grand Classe to other Illusione products, given that it's made by Giolito and sold only at his store. However, as mentioned before there is no indication on the box or the cigar that this has any connection to Illusione, absent Giolito himself, and he has stated this is not an Illusione product. The flavor progression was a little off for me, beginning with the pepper punch that kicks off the cigar and leads you to think it's going to be some absolute pepper bomb before beginning a steady decline in strength and flavor that bottoms out near the midway point, only to start a steady rebuilding of flavor and strength in the final third. There also isn't a ton of variance in the flavors, mainly earth, wood and spice the whole way through in varying intensities. For me, Giolito left a big part of the cigar canvas unused, as the middle third could have been used to show something in terms of flavor. However, it bears mentioning that this is a $6 cigar, a price point not generally known for being ripe with flavor-packed cigars. So when all this is taken into consideration, what are you left with? A very good store exclusive made by a solid company at a reasonable price point that is worth trying, but not hunting down.