Last week I reviewed the discontinued La Gloria Cubana Medaille d’Or No.3. This week we take a look at its shorter, fatter sibling, the Medaille d’Or No.4. Unlike the MdO No.3, this cigar is still officially in production.

Unfortunately though you’re going to have a very hard time finding them in stock anywhere. After having seen how discontinue-happy Habanos S.A. is with the LGC line, it wouldn’t surprise me at all that this is only a precursor to the No.4’s discontinuation.

Let’s review what I wrote last week about the La Gloria Cubana marca and a little about its history:

The La Gloria Cubana marca is an old one, although not nearly the oldest marca still in existence today. Established in 1885 by the Sociedad Cabañas y Castro, the La Gloria Cubana name switched hands a few times and was even discontinued once in the 1900’s before being revived and rolled again at the Partagás factory in 1965. The marca has been rolled there ever since, however ,many vitolas have fallen to the discontinuation ax along the way.

With only two regular production vitolas for the entire marca it has one of the smallest current lines for all of Habanos S.A. tying with a few other marcas but being beaten out by Diplomáticos, which only has one vitola left. The two remaining cigars are the Medaille d’Or No.2 and the Medaille d’Or No.4.

La Gloria Cubana seems to have more defeats in the discontinuation war against smaller ring gauge cigars than other marcas, losing the following vitolas all within the last decade:

Without going into the special releases, there isn’t a single La Gloria Cubana (current production or discontinuation) that breaches the 50 RG mark. The noticeable trend towards larger ring gauges by Habanos S.A. is quite blatant in the fact that this long standing skinny marca is now punched up with every single special release since 2008 being 50 RG or higher with the exception of the 2009 Cuba Edición Regional which was 48 RG. You would think that the medium strength Vuelta Abajo region tobacco would be allowed to shine with a high wrapper-to-filler/binder ratio in the smaller RG, but year after year you see more small RG cigars fall by the wayside.

Here are some pictures of the 8-9-8 box which the cigar I’m reviewing today came out of: 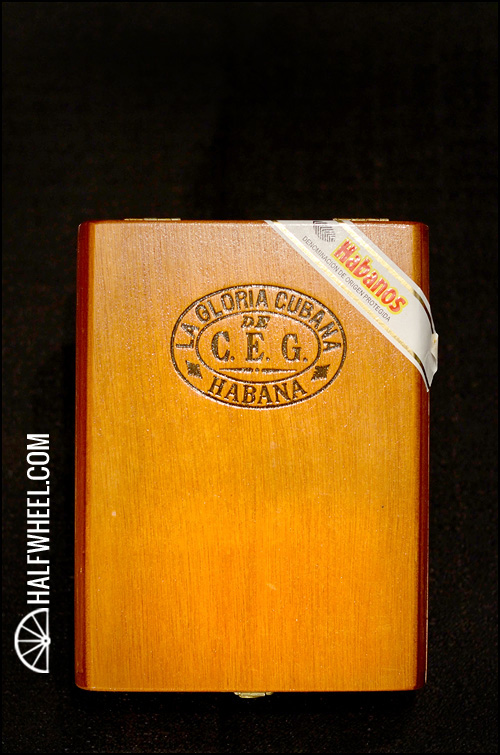 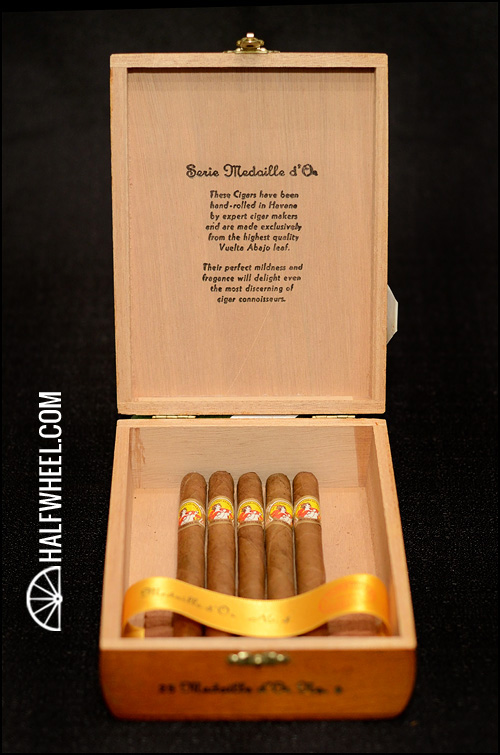 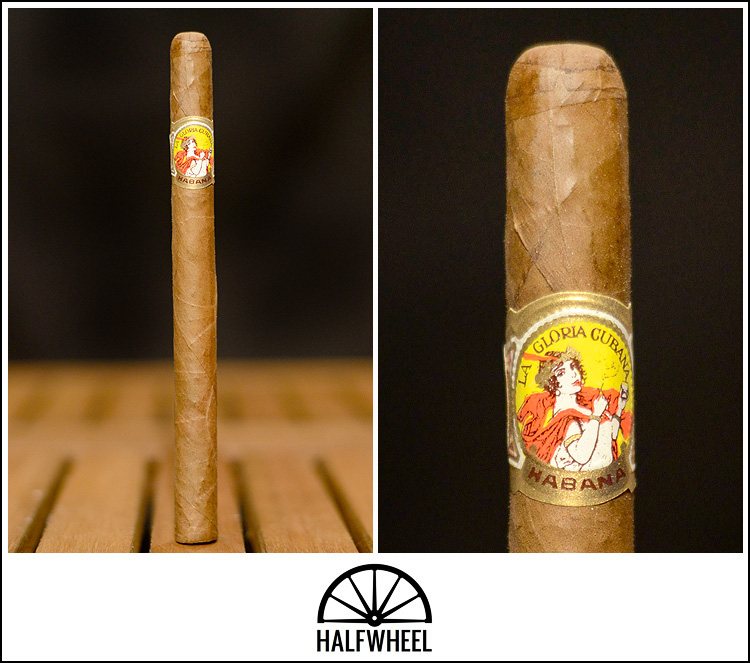 The wrapper is silky soft with little to no oily texture to it. It is a light brown color with no veins to speak of, however the wrapper appears thin enough to see the details of the binder underneath causing the overall look to be a little uneven. While more stout than the MdO No.3, it’s still a delicate little cigar. Cutting the triple cap and taking a cold draw I get very sweet hay and grass notes with a little cedar in the background. There are similar notes coming off the foot of the cigar. Also to note the draw is perfect and not tight at all.

The first few draws after lighting the La Gloria are just a little bitter, but the bitterness subsides quickly. The first third then develops an overall floral profile with almond and cedar notes in the background. Right off the bat I’m surprised with the amount of smoke production from the Slim Panatela. With this cigar there is a fine line between smoking too fast which causes it to smoke hot and letting it go out. Trying to balance that line, I erred on the side of letting go out and I had to relight it a couple of times. The first third is wrapping up with hazelnut notes shining through the floral profile and very distinct cedar notes still in the background. 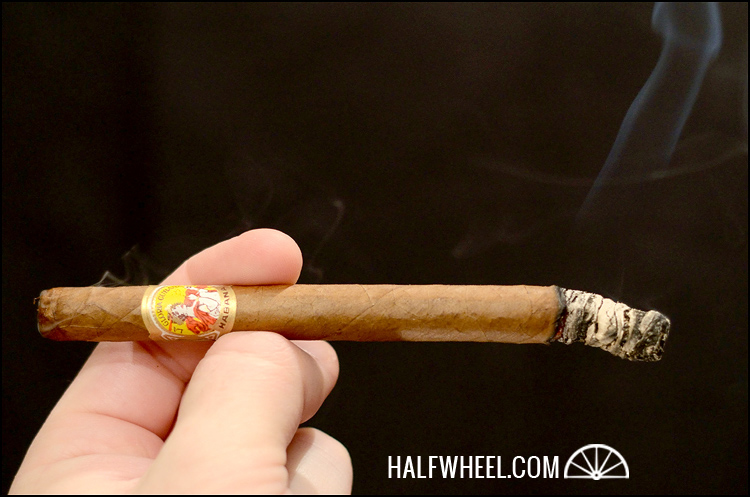 After getting to the beginning of the second third, I can’t reiterate how good the draw is on this cigar, which unfortunately isn’t always the case with the MdO No.4. The flavor profile continues as before with an overall floral tone, however the La Gloria develops this background aroma that’s a little forest-esque that I can only describe as a damp woodsy smell. Moving on the cedar is still hanging out in the background but some leather and light graham cracker notes have appeared as well. The ash is a wavy dark and light gray and hangs on surprisingly well for such a small ring gauge. 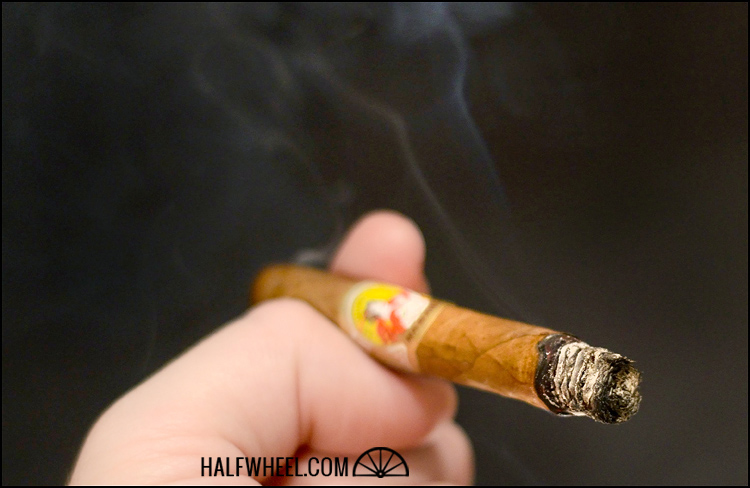 The final third is burning a little hot and bitter despite smoking it as slow as possible. Even with the bitterness there are still some nice dried fruit and leather notes in the background. Purging the cigar helped a little but not overly much. Unfortunately the cigar kind of peters out towards the end and got uninteresting enough that I just put it down. 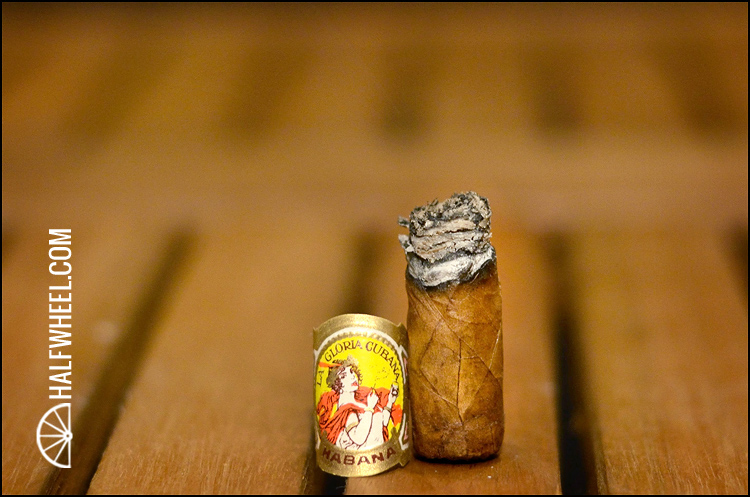 The Bottom Line: I love small ring gauge cigars and I love mild cigars — I’ve stated this time and time again. Having said this, I didn’t enjoy this cigar as much as you might think I would. The flavors were good for the most part leading up to the final third and the construction was fantastic. I felt however that it fell a little flat in terms of depth and still had a bit of harshness that I’d expect to have faded in a four year old cigar. I’m sure that these could blossom into something much better with another two to four years of age on them — especially seeing how well the No.3 smoked at 13 years old. For now though while I can suggest buying a box if you can find them, I only suggest doing so if you plan on letting them sit for a long time.