The La Gloria Cubana marca is an old one, although not nearly the oldest marca still in existence today. Established in 1885 by the Sociedad Cabañas y Castro, the La Gloria Cubana name switched hands a few times and was even discontinued once in the 1900’s before being revived and rolled again at the Partagás factory in 1965. The marca has been rolled there ever since, however ,many vitolas have fallen to the discontinuation ax along the way.

With only two regular production vitolas for the entire marca it has one of the smallest current lines for all of Habanos S.A. tying with a few other marcas but being beaten out by Diplomáticos, which only has one vitola left. The two remaining cigars are the Medaille d’Or No.2 and the Medaille d’Or No.4.

La Gloria Cubana seems to have more defeats in the discontinuation war against smaller ring gauge cigars than other marcas, losing the following vitolas all within the last decade:

Without going into the special releases, there isn’t a single La Gloria Cubana (current production or discontinuation) that breaches the 50 RG mark. The noticeable trend towards larger ring gauges by Habanos S.A. is quite blatant in the fact that this long standing skinny marca is now punched up with every single special release since 2008 being 50 RG or higher with the exception of the 2009 Cuba Edición Regional which was 48 RG. You would think that the medium strength Vuelta Abajo region tobacco would be allowed to shine with a high wrapper-to-filler/binder ratio in the smaller RG, but year after year you see more small RG cigars fall by the wayside.

The Medaille d’Or No.3 is one of the unfortunate victims of the smaller RG purge. Coming in two types of packaging, a Boite Nature box of 10 and an 8-9-8 Box of 25, the cigar I’m reviewing today came from a box of 10. The box of 10 was discontinued in 2001 and nine years later the vitola was discontinued all together. Here are a few pictures of the box: 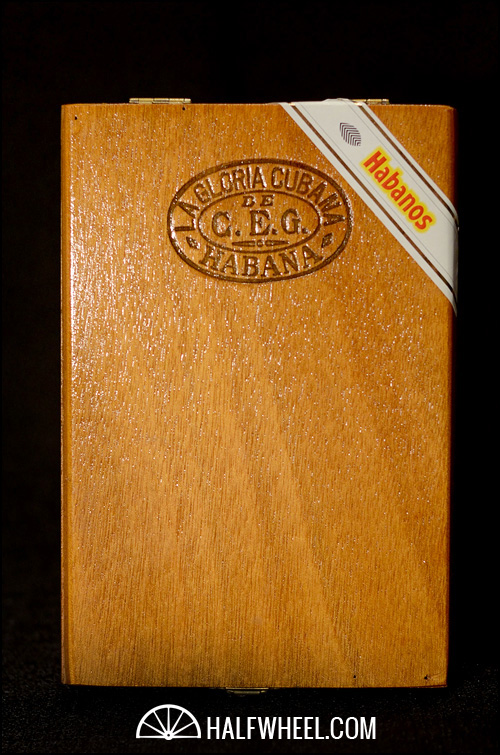 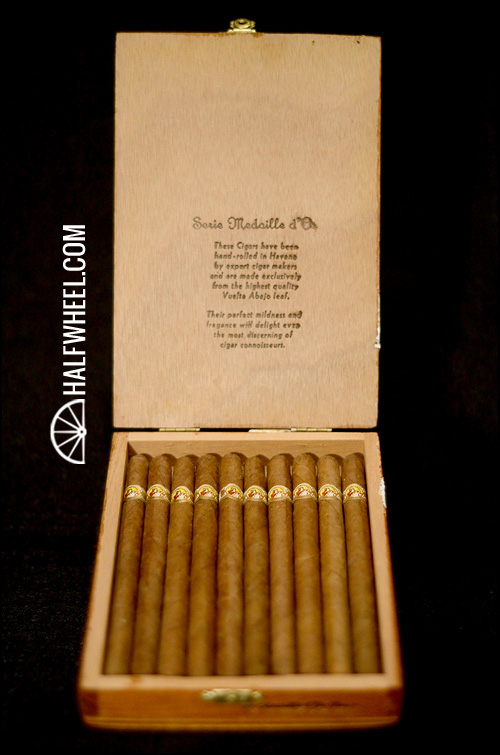 The light brown wrapper is soft to the touch and has a noticeable amount tiny plume all over the cigar. There are quite a few visible veins in this one, although that’s not a consistent trait of the thin La Gloria, but the wrapper is applied well. As with a 60+ RG cigar and the surprise of how ridiculously large the cigar is when you’re actually holding it in your hand, the inverse is true for this cigar. The 28 RG cigar feels delicate and I’m holding it with almost a reverence that larger cigars don’t qualify for. Having said that, the Slim Panatela is a pretty sturdy little cigar — firm to the touch without any soft spots. The aroma off the cigar is classic Cuban notes of a grassy barnyard aroma, although this might be a little more in the barn than the yard, with hay and leather notes shining through. The predraw is a little tight and brings notes of sweet raisins and hints of cinnamon to my tongue.

The initial draws from the first third bring sweet and mild notes of leather, honey, and slight floral notes with an overall fruity aroma. There is a bit of a musty aroma too which isn’t in the least bit unpleasant, but more like entering a long forgotten room from a childhood memory. The smoke is very creamy and coats your palate with the complex bouquet of flavors. The classic Cuban wavy gray and white ash only holds on for about a quarter of an inch before dropping. For such a small ring gauge, the Medaille d’Or No.3 produces quite a bit of smoke when drawn upon, although only a small amount off the foot as it rests. 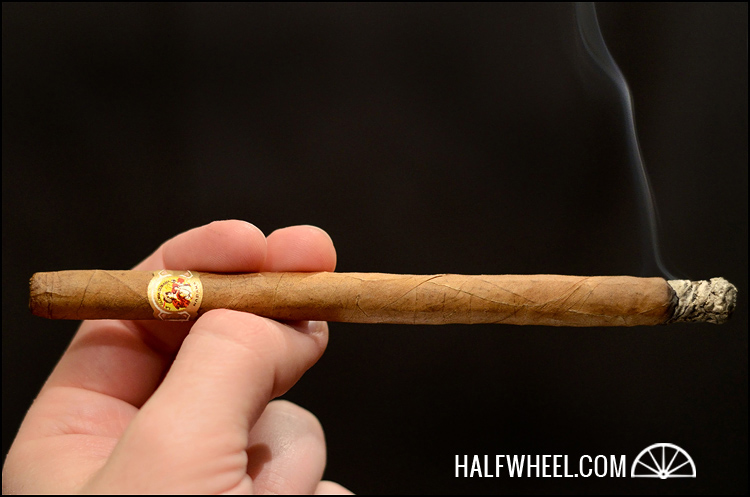 A wonderfully distinct toasted marshmallow note begins the second third of the La Gloria. Alongside it are some pleasant dried date and non-distinct woodsy notes. Continuing through the MdO No.3 produces some hazelnut notes that only appear briefly and disappear as quickly as they arrived. The final part of the middle section ends with some caramel notes that pair with the toasted marshmallow and woodsy notes quite well. While the predraw was slightly tight, once lit the cigar has drawn well without any sort of restricting tightness one might expect from such a small RG. The final third is still mild and it isn’t burning hot at all. Starting out I seem to be getting more floral notes that previously, although not an unpleasant amount. Briefly again the hazelnut and caramel come and go without much fanfare. Even at the very end of the cigar it is still smooth and fantastically sweet without getting bitter or overly smokey. The Bottom Line: I love small ring gauge cigars. I also love milder cigars. So if you put a cigar in front of me that is a small RG, medium body, and a ever changing smorgasbord of flavors it’s a really good chance I’m going to like it. This is absolutely the case here. Because of the milder nature of the cigar with so many subtle nuances of flavors, you should be careful what you pair it with and don’t smoke it too fast. So what is the absolute bottom line? Habanos S.A. should not have ever discontinued these. They are fantastic in terms of price, aging potential, flavor profile and construction. If you can find any, especially with over a decade of age on them already, grab them up. These are absolutely box worthy, as long as you can find a box!