General Cigar’s latest foray into the large ring gauge market is from the La Gloria Cubana brand in the form of the Gorda Gorda. On June 20th Michael Giannini announced they were releasing a new cigar size called the Gorda Gorda.

Patrick covered the details in a news story:

On Wednesday morning, Michael Giannini of La Gloria Cubana tweeted news of a new offering from the brand, a 6 1/2 x 64 Gorda Gorda that is limited to just 500 boxes and is only being made available in the western United States. 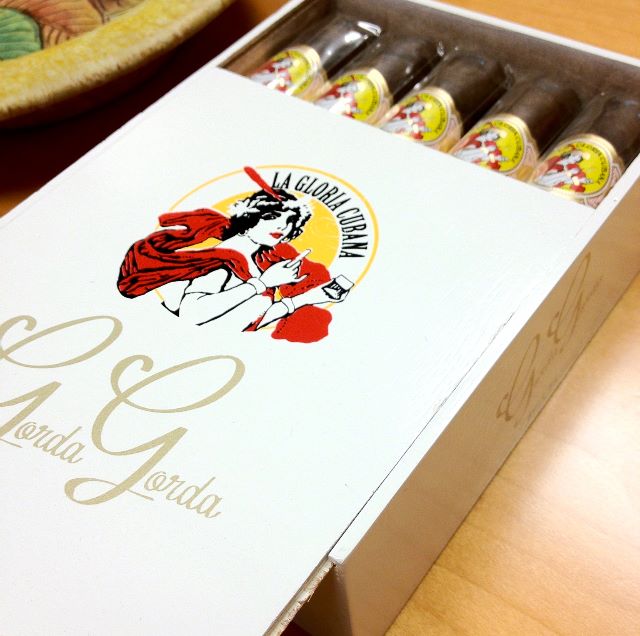 The cigars appear to be packed in 10-count slide top boxes, which would bring the total production to 5,000 cigars. No specifics were shared about the blend or availability, other than that they are being made available only in the western United States.

Giannini followed up the tweet with a reply to a Florida based retailer saying that La Gloria Cubana is working on “other special things.”

More information about this new release will be added to this story as it becomes available.

UPDATE: Michael Giannini says that the cigar will cost around $8 per stick and do come in 10-count boxes. He added that he and Yuri Guillen, production manager for General Cigar Dominicana, had been playing around and having fun with various sizes and this was the result of those experiments. Giannini says that they should know soon which retail tobacconists will have these available.

With the insinuation of the last sentence and the also recently announced Artesanos de Tabaqueros Innovation 538, it seems that Team LGC has some interesting stuff in store for the brand. It is nice to see that these cigars are at either end of the ring gauge spectrum and not fully concentrated on the 56+ RG market. As I’ve stated with the previous large ring gauge cigars I’ve reviewed, the first and foremost thing you will notice is how huge this cigar is. The wrapper is soft, oily and a very nice looking light brown. There are some visible veins and bumps under the wrapper but it’s not enough to detract from the overall look of the cigar. The Gorda Gorda has a little bit of give to it without being soft or spongy. The pre-draw has some nice sweet and creamy tobacco notes and the aroma off of the foot is straight barnyard and fresh hay.

The Gorda Gorda starts out the first third with a smooth and mild profile. The main note I’m picking up is a creamy vanilla note that stands out at the forefront. The draw is good on a cigar this size, not too loose at all and it’s easy to get it to start billowing smoke with just one or two draws. Alongside the vanilla has developed a nice hazelnut note that with the overall sweet and creamy profile is making this a pretty enjoyable cigar so far. A caramelized sugar, vanilla, and fruity profile develops in the second third. The cigar still has a very overall mild profile, however it is a delicate and enjoyable mildness, not a boring and uninteresting mildness. The burn of the Gorda Gorda has been very good only requiring some minor touch ups along the way. The final third has developed a few harsh notes, but after a purge it took care of most of the harshness. The cigar is still fairly sweet and has some nice creamy smoke, but it has developed in strength as could be expected with this much tobacco. I would still classify it as a mild to medium bodied cigar however. The grayish white ash has easily held to an inch throughout the cigar, speaking well of the construction. With a little over an inch left to the cigar it has started to burn hot so I’m going to let it go out with dignity. To be completely honest with you, I was 100% ready to not like this cigar. With the combination of a brand that I rarely smoke and a size that I seldom reach for it was easy for me to think I wasn’t going to enjoy it. I could not have been more surprised and more wrong. The cigar was enjoyable, not only because of the delicate and enticing flavor profile, but despite the larger ring gauge it was quite easy to smoke. Not everything was perfect about the cigar, it did leave a little to be desired in the flavor department and to me 64 ring gauge is just unnecessary. Despite those minor issues I did like this cigar a lot and would definitely smoke this again. It’s a very limited release for General Cigar, so you might have some trouble finding them. If you can though, I can easily recommend you pick some up to try.