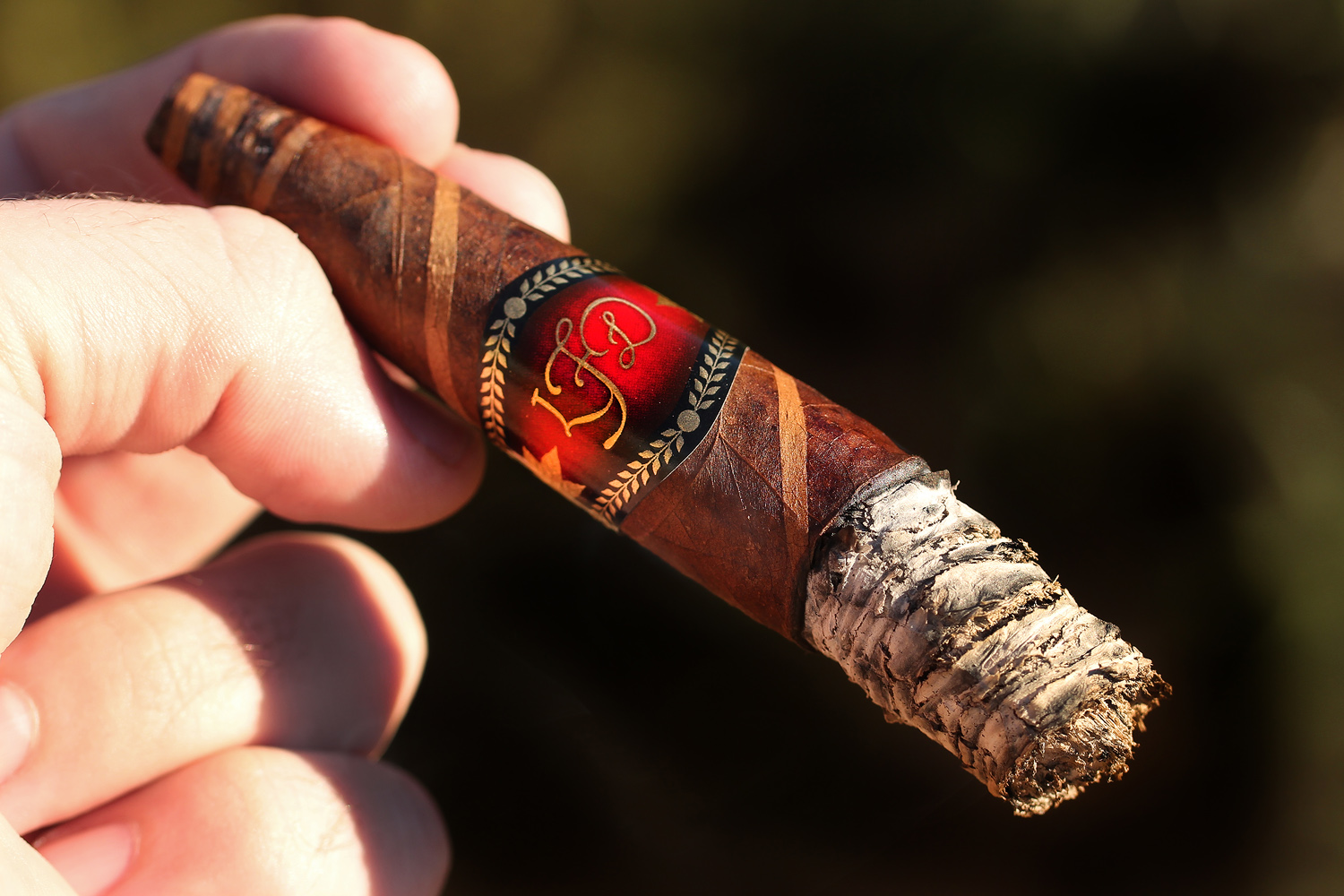 In October, La Flor Dominicana issued a press release announcing its three new releases for the fall and winter of 2013: the Litto Gomez Small Batch No. 5, L-Granú and the Mysterioso Collector’s 2013.

The cigar had been mentioned just a few weeks earlier on the company Facebook page, where it was referred to as the Collector’s Edition Mysterio, a nod to the name of a line of similar shaped cigars that the company has been producing since 2001. The LFD Mysterio is an eye-catching cigar due to both its perfecto shape and a contrasting foot and cap—the natural wrapper version gets an oscuro top and bottom while the oscuro version has natural ends.

For the 2013 holiday season, the company decided to make the Mysterio even more eye-catching by incorporating a pattern of Ecuadoran Connecticut tobacco running up the cigar that stands out against the Connecticut broadleaf oscuro background. In addition to the new design, the name also changed from Mysterio to Mysterioso, a move that Tony Gomez said was done simply to create a bit of differentiation between it and the existing Mysterio. The cigar also reached a new high price—$19.00 per cigar and $95.00 per box—as previous five-count boxes of the Mysterio line can generally be found for between $60 and $80.

The beauty of the La Flor Dominicana Mysterioso project begins at the boxes, which look like this: 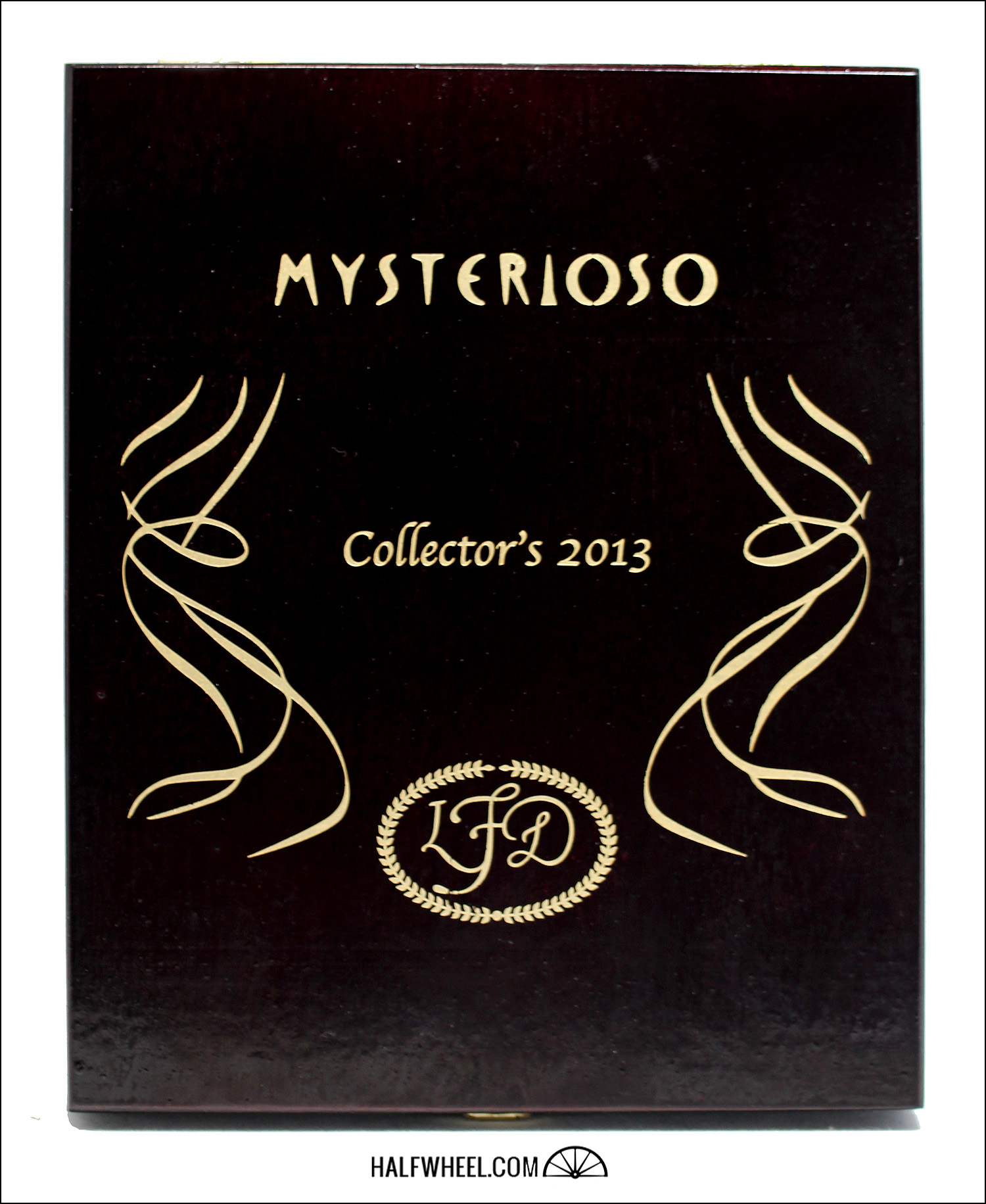 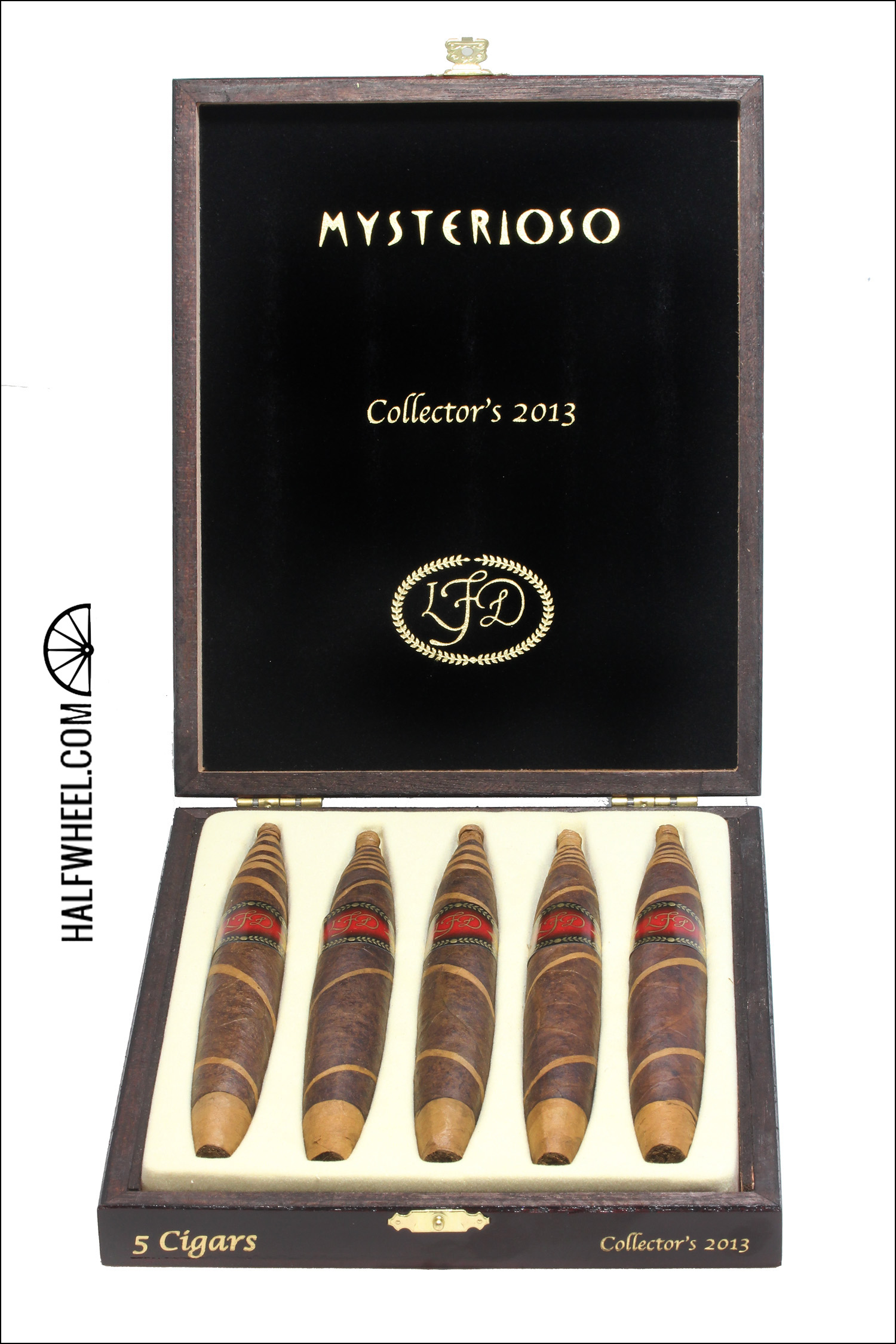 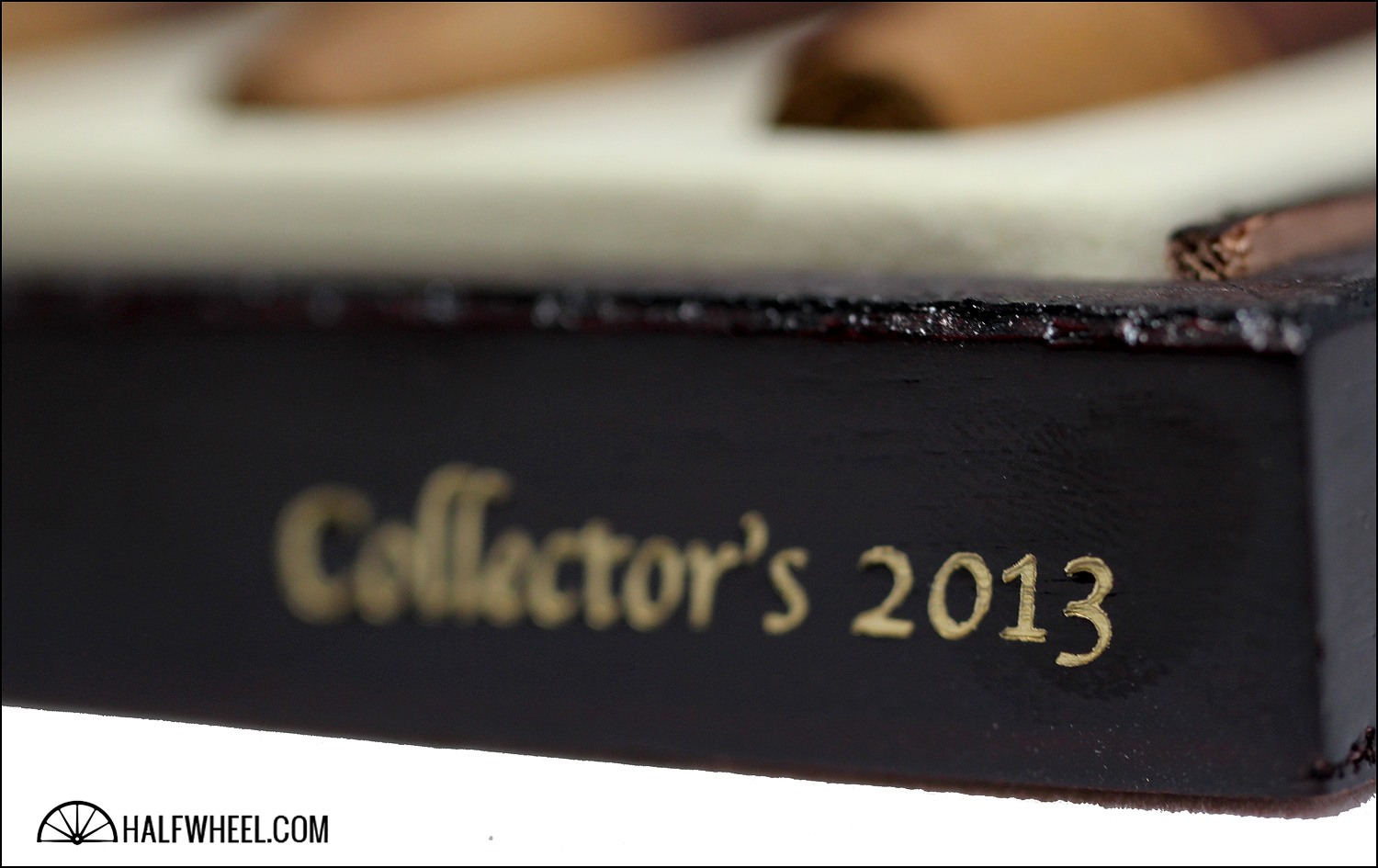 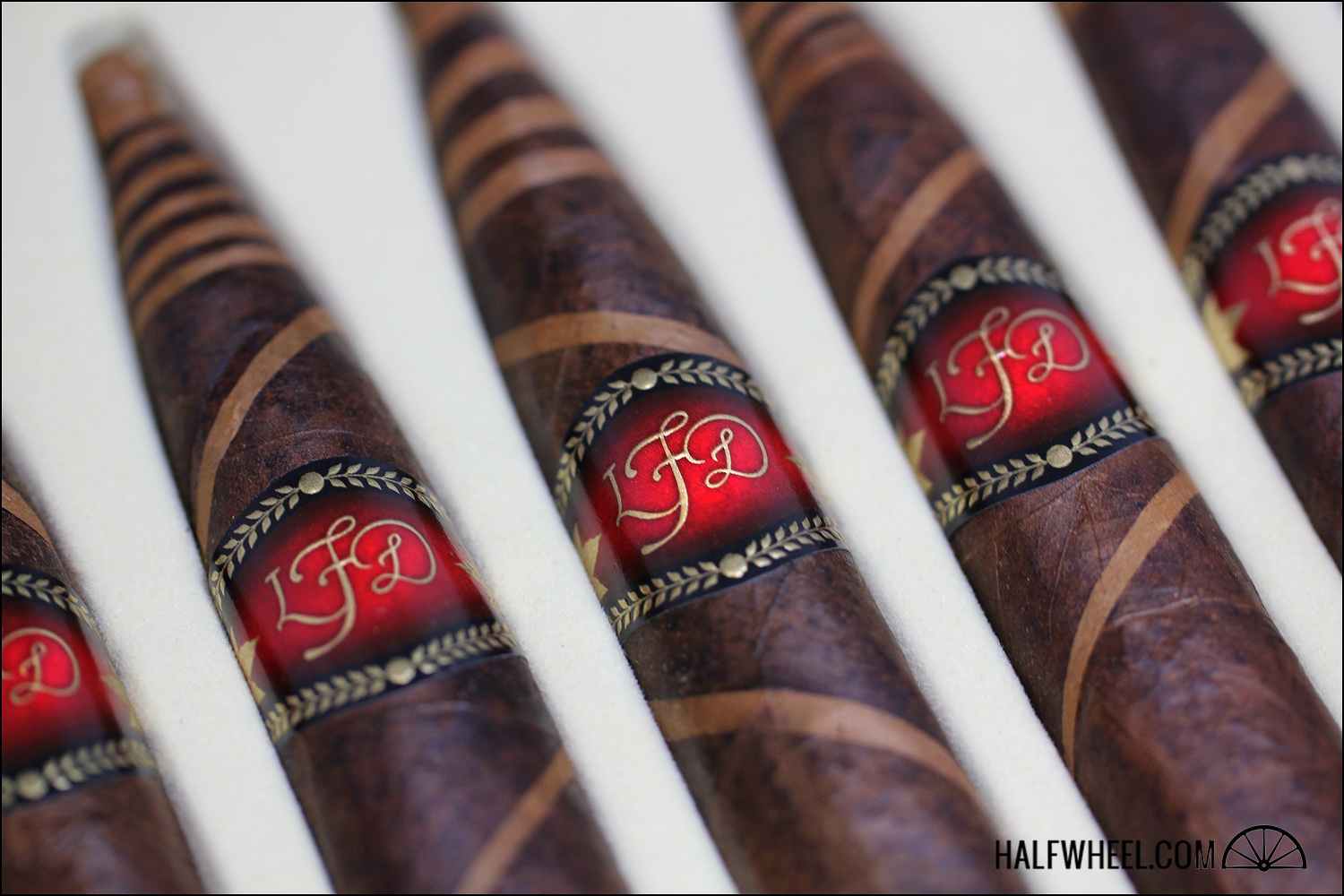 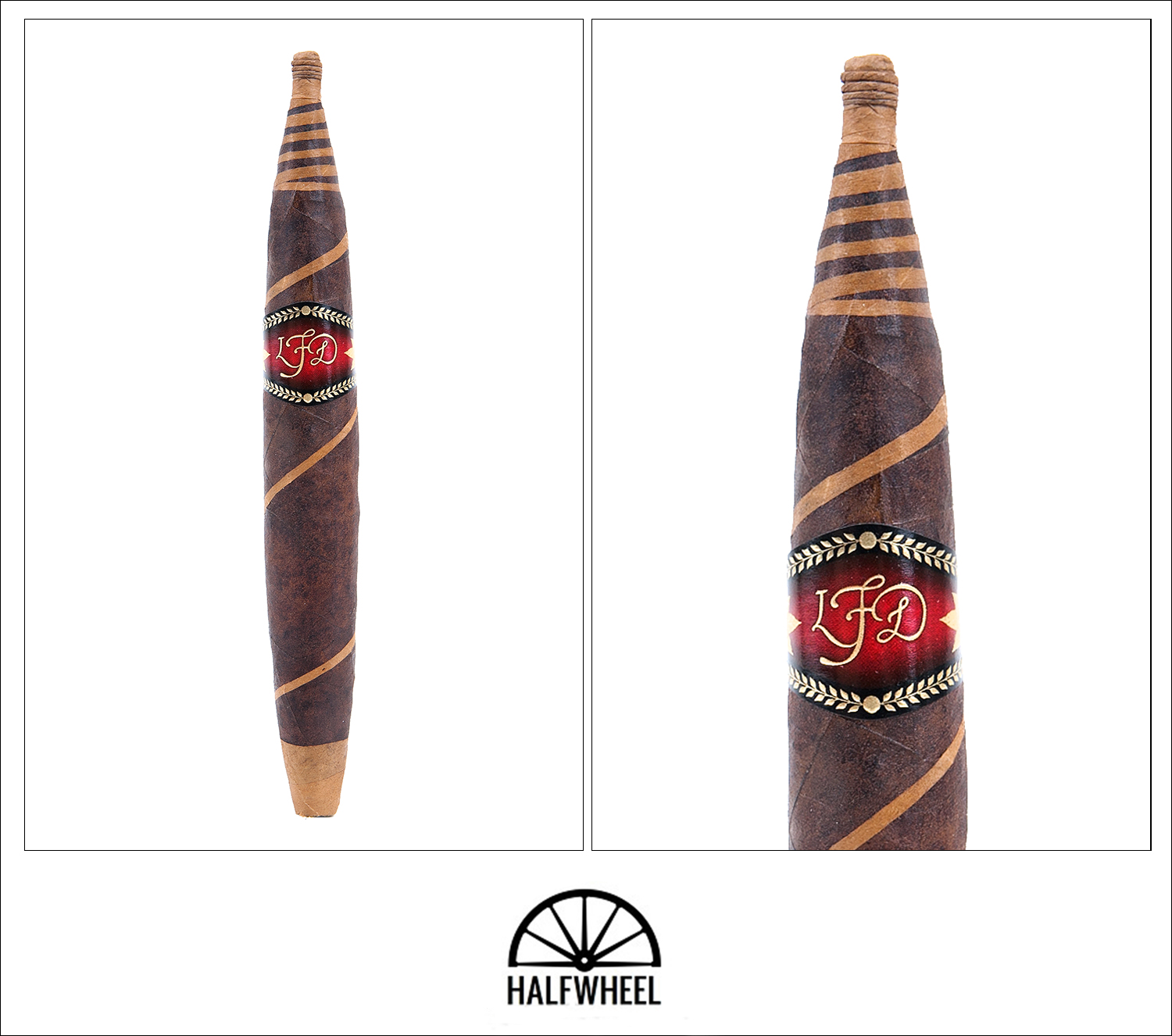 *The total production number has not been determined; the cigar will remain in production until January. As of this post, between 900 and 1,000 five-count boxes have been produced.

The La Flor Dominicana Mysterioso Collector’s 2013 is an absolutely beautiful cigar for what should be fairly obvious reasons. The thin strip of tobacco that winds its way up the cigar adds a level or artisanship that you just don’t see often and the head of the cigar features four wraps of an intricate winding of tobacco that is worth taking a few moments to admire and appreciate. The wrapper has a few very small veins and the ribbon of lighter tobacco covers the seams which are very flat to begin with. There is a good amount of color variation on the wrapper leaf, both near the veins and in mottled sections where the color is notably darker. The firmness is fairly uniform, though I’m a bit more gentle on this cigar than I would be on others given its decorative nature. I’m almost not sure exactly where to clip the cap for fear of having it unravel on me — the decorative lacing of tobacco makes it harder to find that natural point where to cut. The pre-light aroma is very dry and neutral with no pepper, spice or other distinctive notes. The cold draw is a bit tight, leading me to think that I may need to clip a bit more off or hope that at some point the heat will loosen things up. It too is very neutral with little spice, presenting a cake donut note that doesn’t offer much inspiration.

While the first puffs are a bit tight they have a good bit of flavor, starting off with notes of corn flakes and dry pretzels, fairly neutral and not overly peppery, with the exception of one cigar that delivered a much more pronounced white pepper note. While not creamy per se, the smoke does have a bit of a creamy nature to it, especially in the nose. Early retrohales are smooth and easy, packing very little in the way of pepper and sliding out of the nostrils with hardly any major sensation. The first draws are a bit of a challenge but do yield decent smoke production. The ash holds on well for over an inch before suddenly dropping off while the burn line stays straight and even in the early going. For a La Flor Dominicana cigar, I’m surprised by just how mild to medium bodied the first third of the Mysterioso is, operating largely without spice or pepper and choosing to stay in the realm of a cake donut. After that first clump of ash falls, there are trace notes of chili pepper that come out in the smoke and the pepper component seems to be picking up, while a fairly bright aroma takes another step forward with an almost herbal base that seems much at home in the Christmas season. 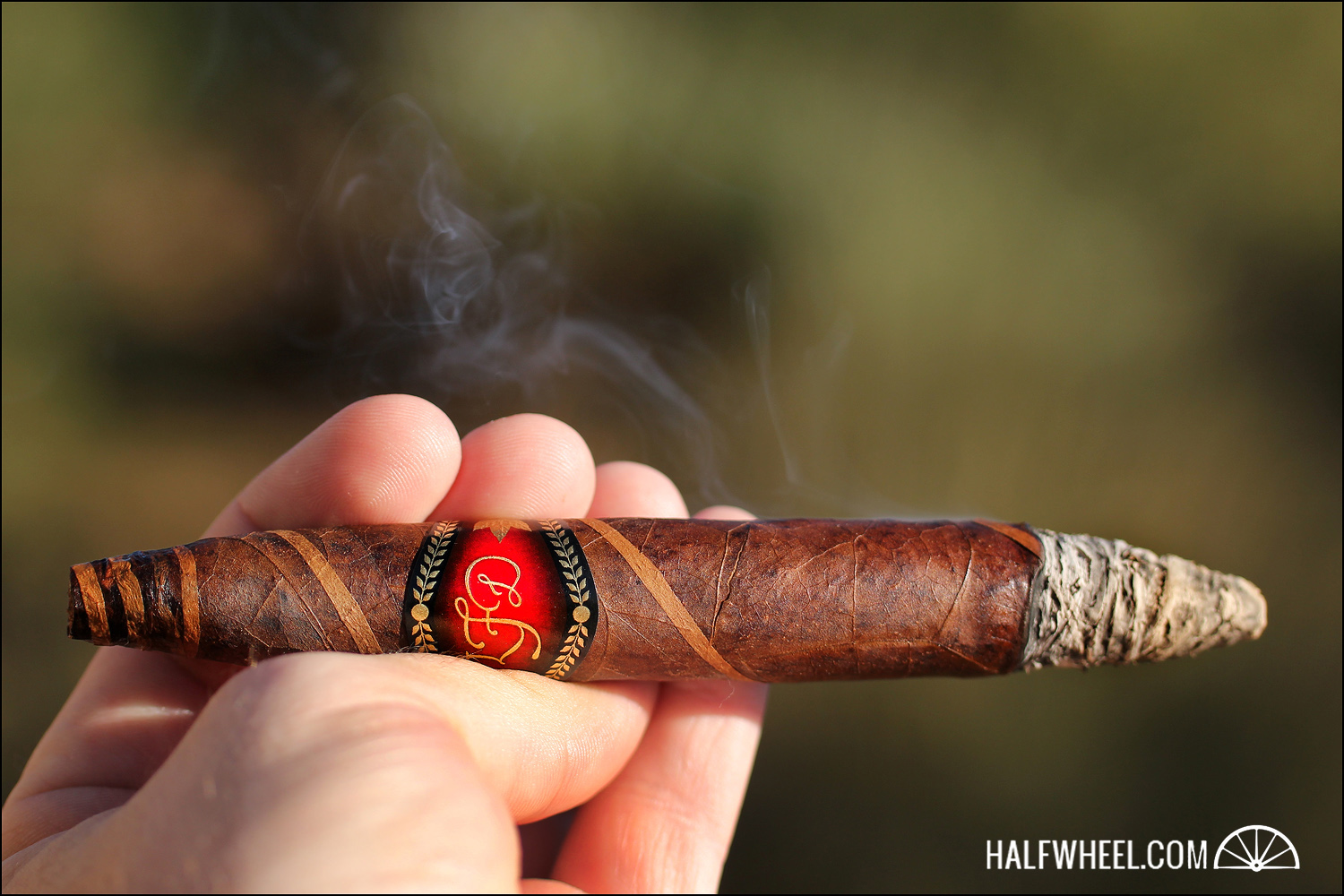 The transition to the second third is more visual than flavorful, as there isn’t much change to be found in either flavor or strength. It’s in a retrohale at the midway point of the Mysterioso where the cigar offers a bit more of a challenge, with the pepper component stepping forward just a bit. The smoke production is good though far from billowing and tends to subside when the cigar has been at rest for more than a few seconds. In the third cigar smoked, there was a much different flavor sequence picked up than in the first two, as it became almost sour at points and didn’t really show any of the notes picked up in the first two cigars. 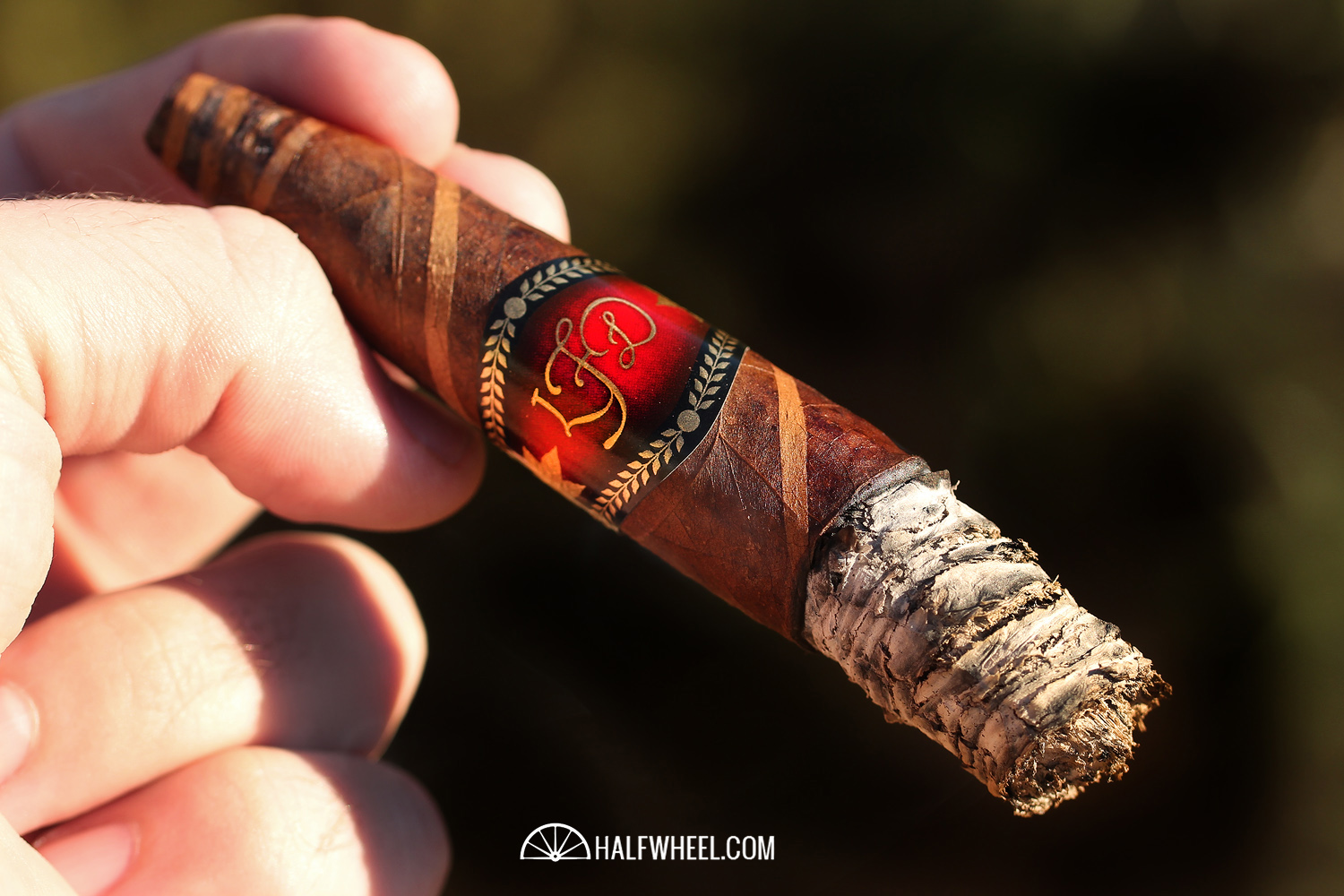 When the burn line gets to right about where the band would have been had I not removed it, a pepper laden note jumps out of the cigar and signals a pronounced transition to a profile that had been absent to this point. A much more substantial of black pepper comes in during the final third and delivers the profile that LFD fans will have likely been looking for up to this point. A third and final retrohale proves to be the most challenging of the bunch, offering a more pronounced white pepper note and even a touch of sharp, dry wood. It’s still not nearly as overpowering as what is found in other cigars—LFD or otherwise—but it is the most power-packed so far. 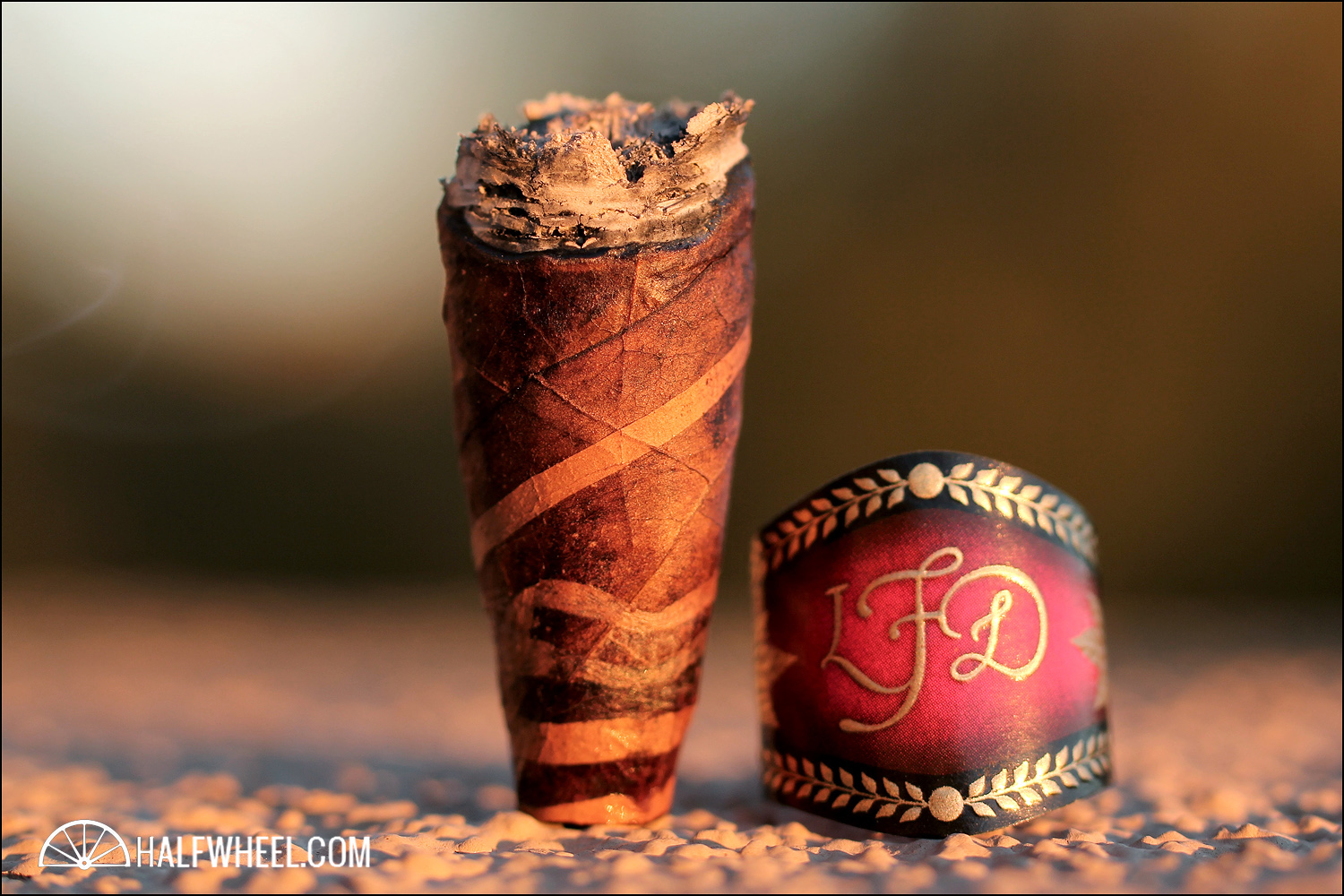 The La Flor Dominicana Mysterioso Collector's 2013 left me a bit disappointed—I already loved the beauty of the cigar and wanted to love the flavor profile it offered, but at the end of each one, I just didn't. That's not to say I didn't like it; it is an enjoyable cigar that offers a smooth smoke with hardly any unfavorable puffs, but the first two thirds were simply too mild and nondescript for my liking and the final third, while stronger, lacked a pronounced flavor profile that would at least have me singing its praises. The hardest part to resolve is the price, which while not factored into the score is incredibly hard to justify unless you view this more as a collector's edition than a cigar to smoke. While I am a big fan of the La Flor Dominicana portfolio, this particular cigar seemed more about show than substance.