In 2007, La Flor Dominicana released 5,000 of its first Gran Corona-sized cigar, the La Flor Dominicana Double Ligero Oscuro Natural A which used Dominican fillers and binder covered by a Ecuadorian habano wrapper. The same blend and size was rereleased in 2008, again with 5,000 total cigars.

At the 2013 IPCPR show, we were shown the newest incarnation of the Gran Corona from the company, the La Flor Dominicana Double Ligero A Oscuro Natural Collector’s Edition, which was introduced to commemorate the expansion of the Tabacalera La Flor S.A. factory in February of 2013. This version also uses Dominican tobacco for the binder and fillers, but changes the Ecuadorian habano wrapper to an Ecuadoran sumatra ligero.

First released in 2007, the Double Ligero “A” has become a subject of lore only to be found in the humidors of determined cigar Collector’s around the world. This will be the first time that the “A” size has been rolled in LFD’s factory since 2008. This 47×9 Special Edition combines a Ligero Sumatra wrapper with fillers and binder from their farm in the Dominican Republic. The box is a tribute to the completed factory expansion and is artistically adorned with its image.

Despite this being called a “Collector’s Edition” and there being 5,000 of the first two releases, the company isn’t disclosing how many they will make. “We will make them until our laser engraver explodes!” said Jon Carney, vp of sales for LFD. “Or until we run out of wrapper, which has not happened yet.”

In addition to the Double Ligero A, the company recently began shipping the Collector’s Edition Mysterio.

There have now been three separate releases of a Gran Corona vitola from La Flor Dominicana:

The boxes of the La Flor Dominicana Double Ligero A Oscuro Natural Collector’s Edition are laser-engraved with an outline of the factory expansions. They look like this: 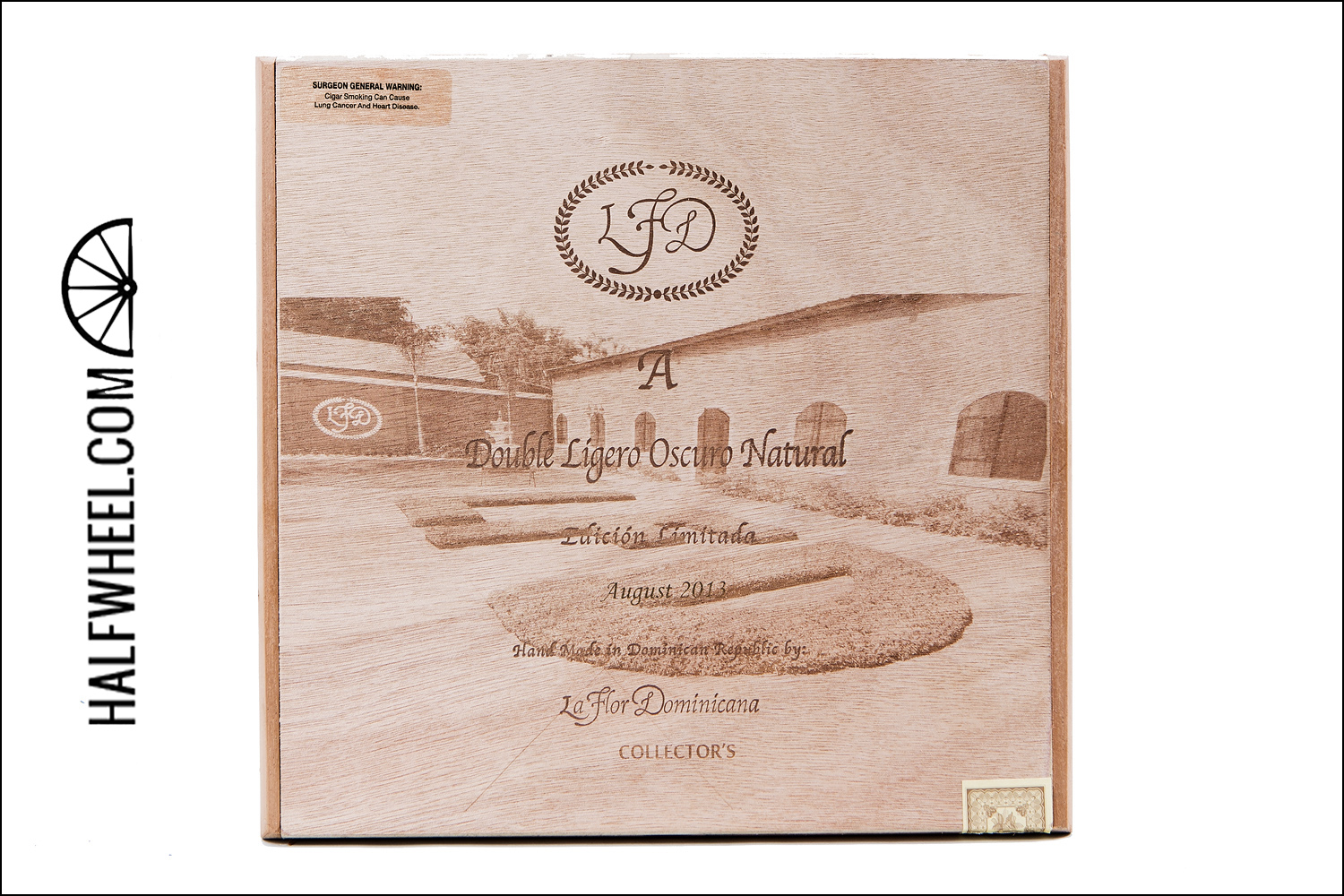 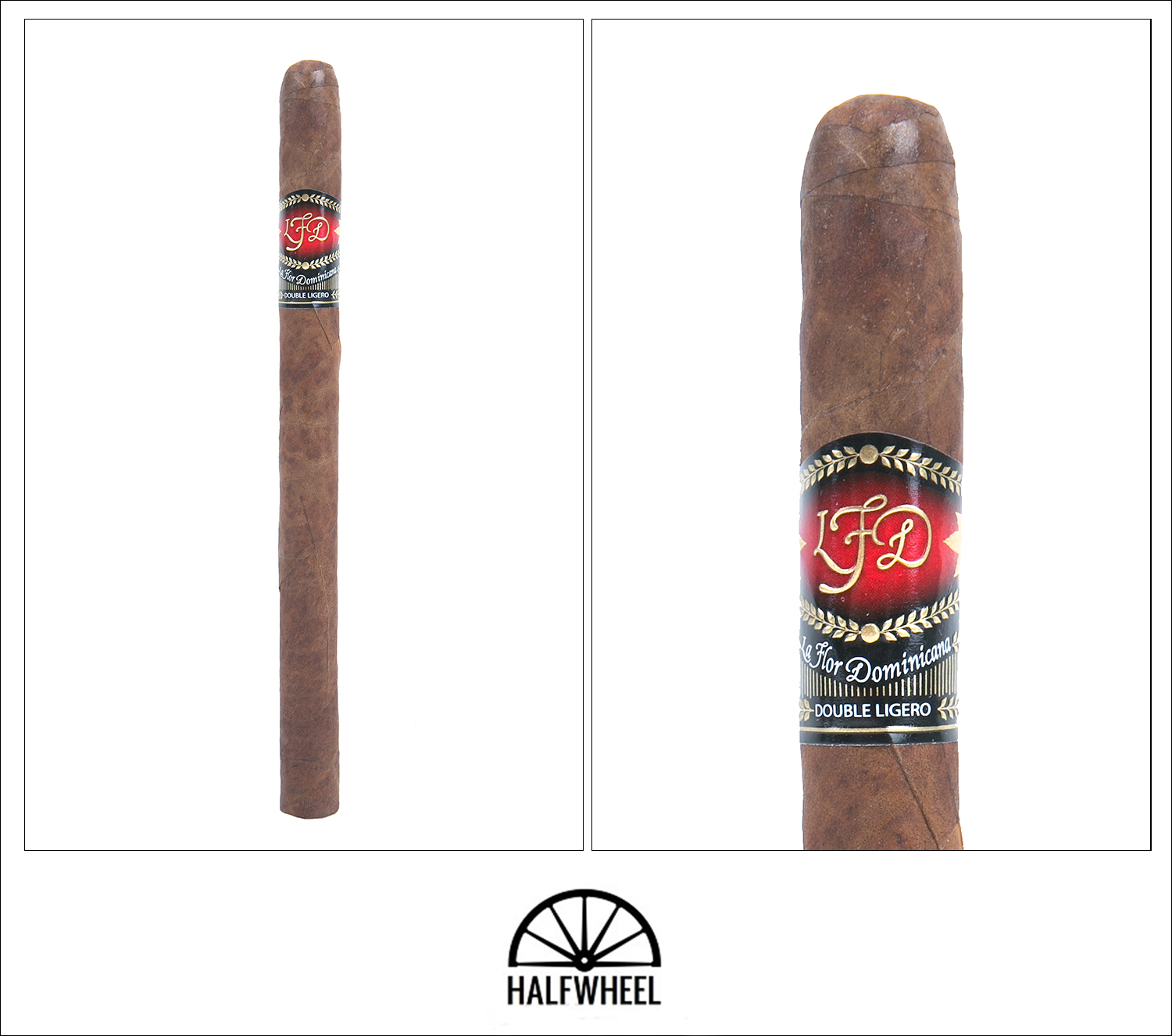 As with any Gran Corona-sized cigar, the La Flor Dominicana Double Ligero A Oscuro Natural Collector’s Edition is almost comically long when held in your hand, but the relatively small ring gauge keeps the size from being totally overwhelming. A mocha brown wrapper that has quite a bit of tooth to it covers the cigar, smelling strongly of a combination of sweet tobacco, earth, leather and oak. There is also a little more give than I like to the cigar when it is squeezed, making it a bit spongy in general.

Starting out, the La Flor Dominicana has equal parts sweet oak and creamy leather notes, along with dark earth, powdery cocoa and a bit of bready toastiness. There is a nice amount of both black pepper on the retrohale and spice on the tongue throughout the first third, although both start to recede as the first third draws to a close. Smoke production is way above average, quite dense and flows off of the foot even when it is sitting. Construction-wise, the burn is razor sharp so far and the draw has the ideal amount of resistance despite the spongy feel when squeezed. The overall strength ends the first third as a solid medium and is increasing noticeably. 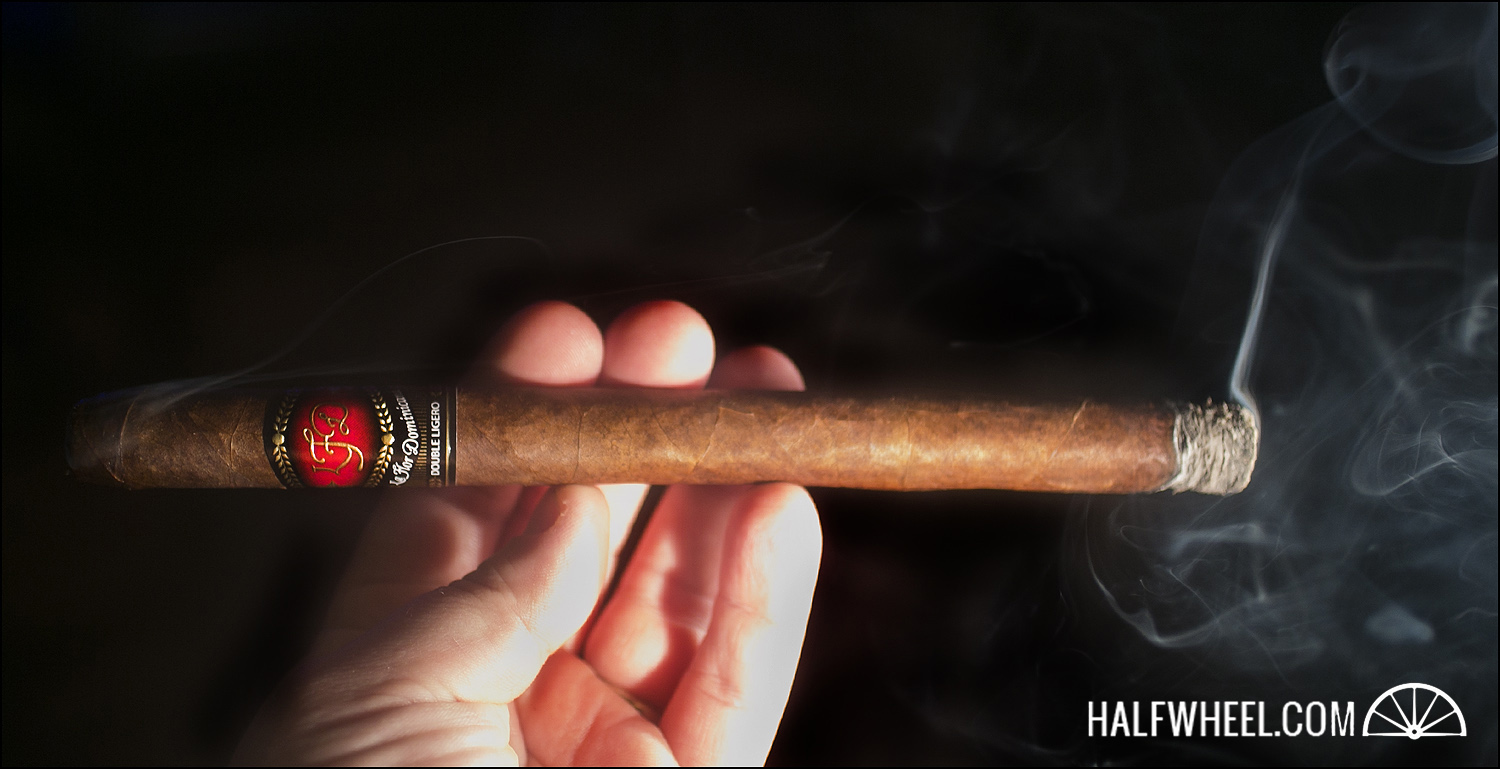 Although the flavors are virtually identical, the profile of the Collector’s Edition A mellows out noticeably overall as the second third commences. Both the black pepper on the retrohale and the spice on the tongue take a dramatic step backward in strength, to about 40 percent of what it was in the first third. While the flavors of dark earth, bitter espresso, cocoa and creamy leather are still present, they seem somewhat diminished in distinctness. The burn is still excellent, as is the draw. The major change in the the profile is the strength, which continues to rise until it is just under the full mark by the end of the second third. 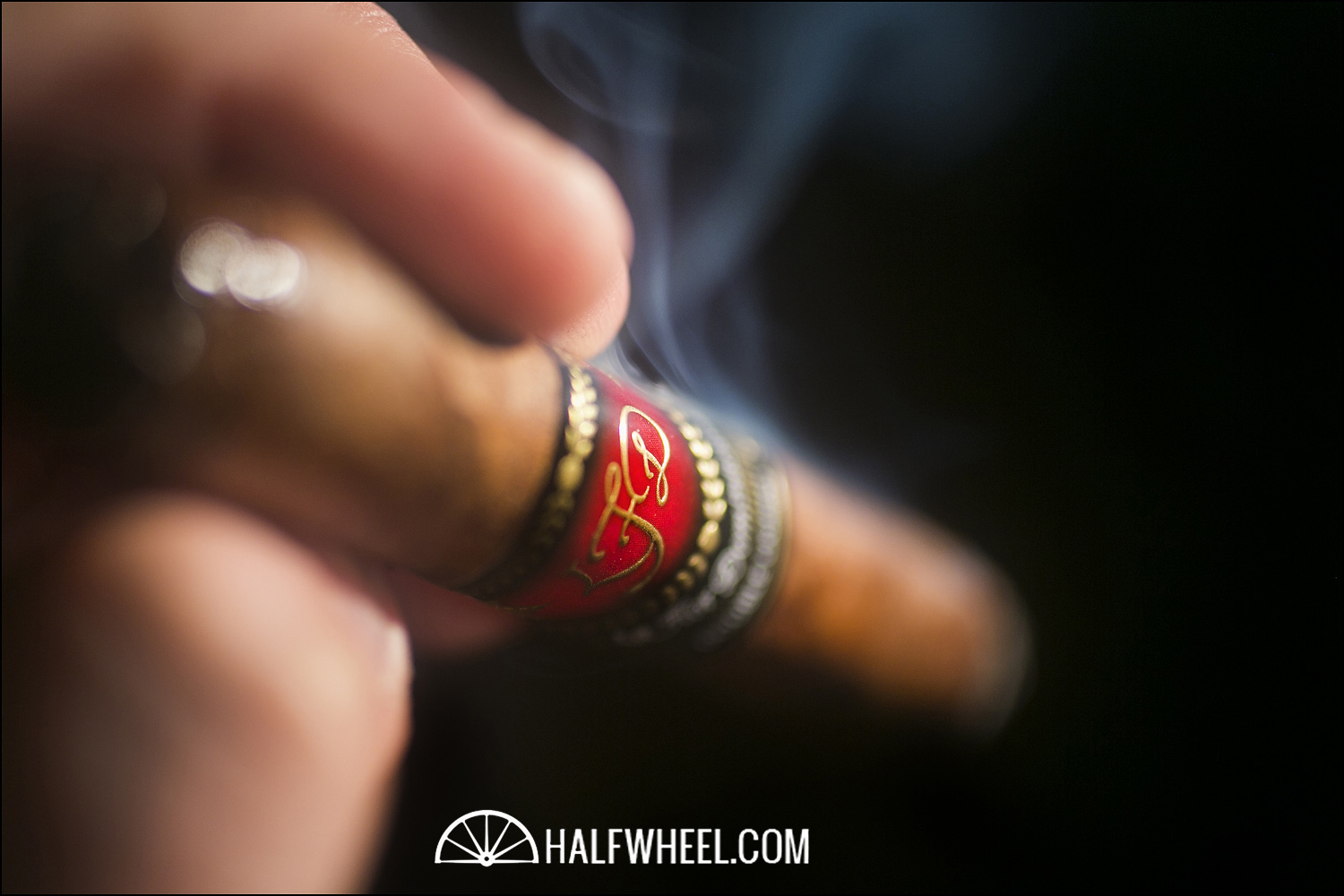 The final third of the Double Ligero A Oscuro Natural Collector’s Edition holds no major surprises at all in regards to the flavors in the profile, which continue on the same path as the first two thirds. Leather, earth, dark cocoa, espresso and oak all combine very well with the small amount of black pepper that is still on the retrohale, while the sweetness on the palate has actually increase noticeably. The construction continues to impress, as does the smoke production, and the overall strength ends the cigar well into the full category. 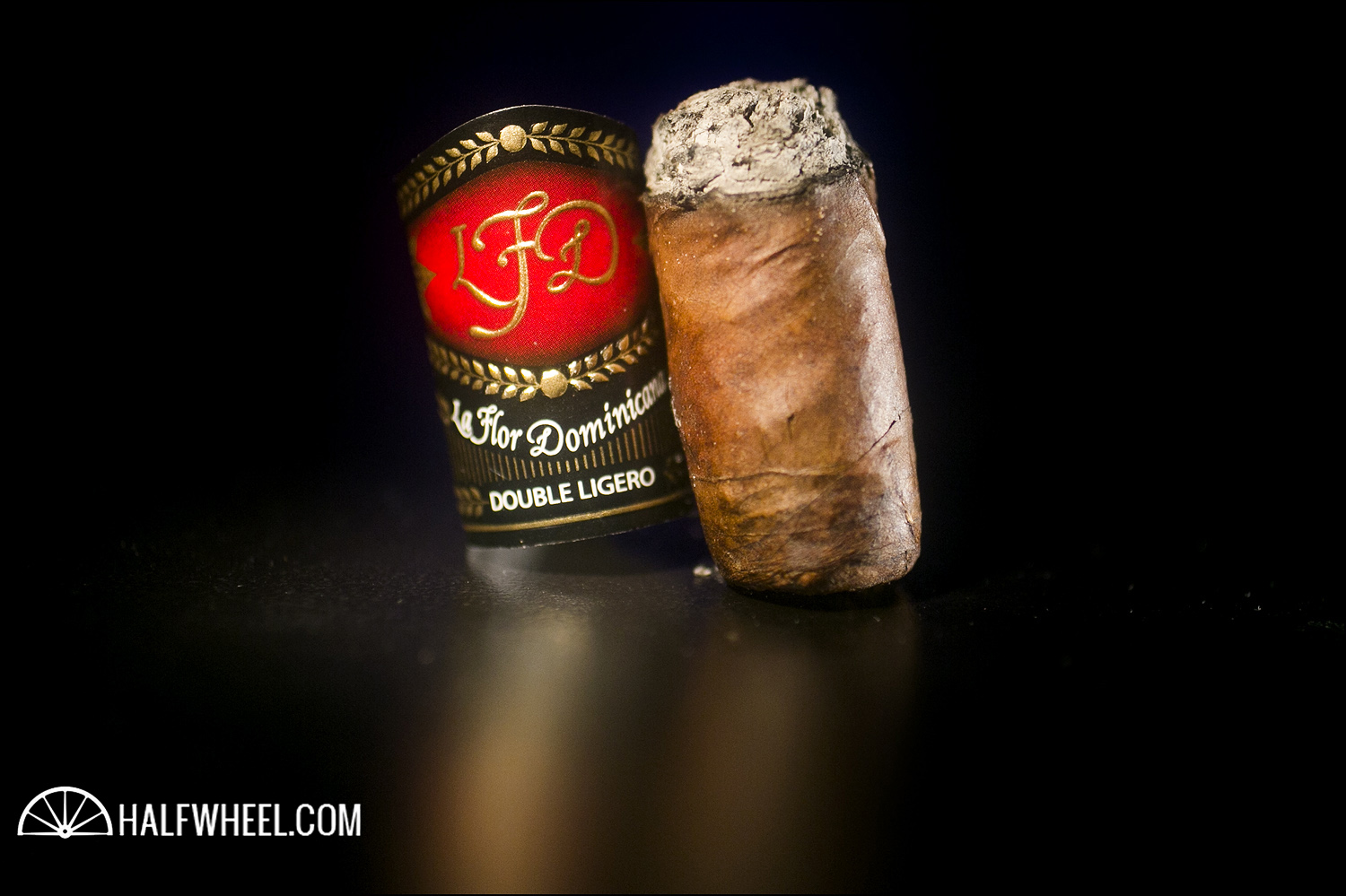 The Gran Corona vitola has never been a go to size for me, simply due to the almost absurd length. However, I do enjoy them every once in a while as an indulgence when I have the time. The La Flor Dominicana Double Ligero A Oscuro Natural Collector's Edition is easily one of those cigars, with a really nice—albeit fairly unvarying—profile that builds gradually towards the end of the cigar. Easily smoked and easily enjoyed, but not overly complex, it is still a cigar that will please people who love the Double Ligero blend already and is easily good enough to win over some new converts as well.