While it wasn’t explicitly stated as we walked around La Flor Dominicana’s booth at the 2013 IPCPR Convention and Trade Show, it seemed that there was an air of change floating around, highlighted in particular by one cigar in particular, the Chapter One.

The La Flor Dominicana Chapter One is the first cigar to be blended by Antonio Gomez, Litto Gomez’s son who had taken an increasingly visible role with the company over the past four years or so before almost disappearing from the radar about a year ago. He first official responsibility, as he puts it, was as Florida Territory Manager before adding the Colorado area about a year ago. He also oversees the company’s social media venture, which include Twitter, Facebook and Instagram.

It was at the end of January that he shifted the majority of his time to the company’s factory in the Dominican Republic. While his official title is Quality Control Supervisor, the 26–year-old Gomez’s Facebook page more appropriately describes his current position as “A Work in Progress.” He explained that by saying that “since day one with the company, I’ve always considered that my main responsibility, whatever my title may be, is to learn.” He added that “every day I want to learn something new about cigars, about tobacco, about the company, about our customers, or about our industry, and every day I want to be better and more reliable at what I do.”

He says he now spends some 75 percent of his time in the Dominican Republic and that it is his plan to stay there for “a very, very long time.”

The Chapter One project began as soon as Gomez got to the factory earlier this year, starting the process by box-pressing one of the company’s Double Ligero Maduro Chisels simply out of curiosity. That cigar made its way to Litto along with his request to make a cigar, to which the elder Gomez gave his blessing.

As the project was being developed, Antonio Gomez found that when box-pressed, the Chisel didn’t have enough of a taper, so he increased the ring gauge to a 58 to make the taper more noticeable. Once the size was right, Gomez went through almost every wrapper in the company’s reserves, trying Broadleaf, Habano 2000 and Mexican San Andrés before settling on the Brazilian wrapper that he said delivers a “very dark, rich flavor that I really enjoy.” With the wrapper decided, he went to work on the binder and filler, selecting a batch of Connecticut leaf for the binder that had been rejected for wrapper due to aesthetic reasons – basically too much variation and inconsistency in color. Gomez said it became “the perfect binder for what I was trying to achieve, adding power and more of that dark chocolate, roasted-type flavor.” He also noted how it combined perfectly with the Dominican filler that he was planning on using.

Gomez said that his father always had an idea of how he wanted him to progress through the company, saying that it was important for him to get his feet wet on the road, “getting to know our retailers and customers on a very personal level.” Gomez spent four years on the road representing the company, visiting shops and events before making the move to the factory in January 2013. Now, he primarily works with the quality control department to make sure that any potential issue with a cigar is removed from an LFD cigar before it reaches the end consumer.

For Antonio Gomez, Chapter One carries a lot of meaning both for him and the company, saying it is the beginning of something new on both levels. He also acknowledges its tie-in to his love of literature and writing, noting that he was an English major at Florida State University. For Gomez, “it was great to find a name that tied all those things together on a level that is both personally significant and significant to La Flor Dominicana.”

He also readily admits to looking towards the future, saying that the challenge of working with tobacco is something he looks forward to when responsibility for the factory comes to him and hopefully, Gomez said, his little brother, who is currently 12-years-old, has been to the factory over the summer and has shown an interest in joining the company some day, adding that he looks forward to the day they’ll get to sit down and enjoy a cigar together. 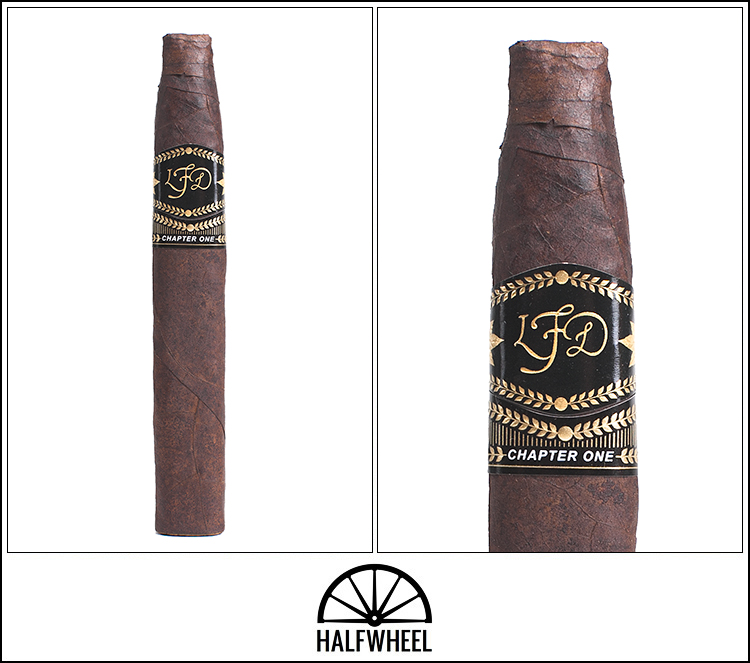 The La Flor Dominicana Chapter One is covered with an incredibly dark wrapper that is smooth despite having a number of small veins. There’s a fair amount of oil and just a bit of crystallization but not much if any toothiness. Antonio Gomez says that he went with as high a priming of a ligero leaf as he could for the wrapper without running into burn issues. At first encounter, it’s striking how much bigger it is than the other Chisels that LFD produces, the 6 x 54 Double Ligero Chisel and the 5 1/2 x 54 Litto Gomez Diez Chisel. The pre-light aroma makes me think of a baked chocolate dessert but with a bit of pepper. A simple pinch of the cap opens up the cigar and reveals an easy flow that has notes of chocolate and a touch of coffee.

There is a decent amount of pepper in the first puffs and fairly early on its easy to discern that the La Flor Dominicana has a very unique flavor profile. I’m not sure whether it’s the Brazilian Oscuro wrapper or the combination of the entire blend, but it’s clear that my palate is going to be challenged with this cigar. After a few puffs of the La Flor Dominicana Chapter One, sweet earth is the first thing that comes to mind; there is a juiciness to the flavor as well as a good bit of terroir. Spice is present but fairly minimal, and it is vastly overshadowed by the other flavors in the cigar. The smoke that fills the air has an almost herbal aromatic that reminds me of an Italian digestif – it’s something I’ve had before but on such rare occasions that it hasn’t carved out a firm place in my memory. The ash is revealed with a gorgeous layering effect and holds on decently. 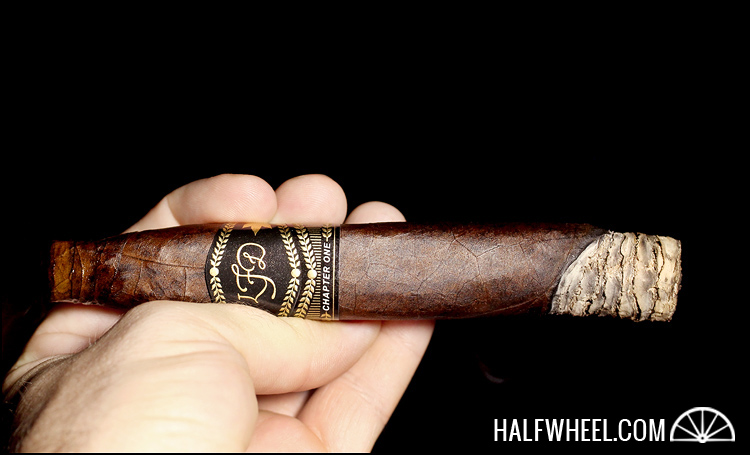 The earth notes back off as the cigar heads into the second third, with the rich juiciness coming through in spades for a solid 10–15 puffs. Once that note runs its fairly quick course, the flavor dries out a bit and returns to showing a good bit of clay and earth as it approaches the midway point. There’s also an aromatic note of steak drippings and rich, thick balsamic that comes out at this point and shows off the juiciness that the cigar shows at times. By the time the La Flor Dominicana Chapter One hits the center line, a bit of front-of-the-tongue bite comes along, though I’m trying as hard as I can not to find it unpleasant. It is a fairly short-lived sensation, replaced by a dry, back of the tongue spice that has shed all the rich fruit notes from earlier on and now seems guided by the soil and earth. The flavors don’t jump off the cigar, though they are certainly enhanced by the Oscuro process bringing out the oils. While I tend to think of Brazilian wrapper leaves being somewhat subdued as far as their boldness, this one is much more up-front with its flavors. The burn rate also seems to have slowed just a touch, something that I find common with La Flor Dominicana cigars when they get into the second half. 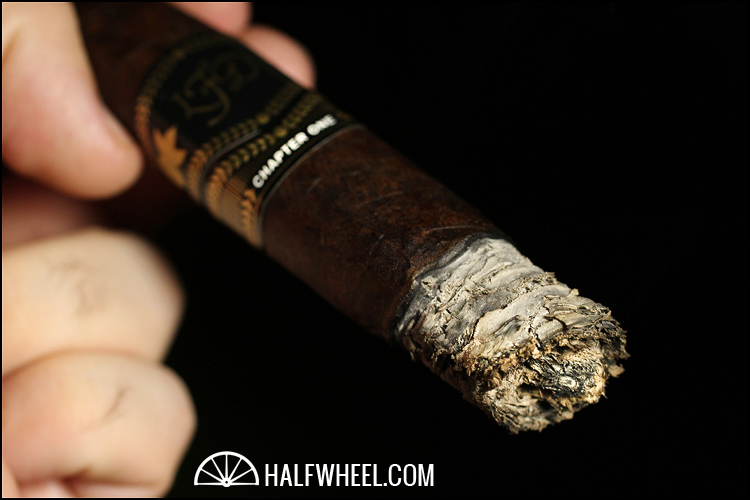 The final third of the La Flor Dominicana Chapter One starts with the cigar still holding on to just the faintest touch of harshness, which combined with a good bit of spice and earthy texture, makes for a double edged flavor experience. On one hand, the Brazilian wrapper shows a good bit of terroir and soil, while the pepper delivers some extra stimulation to the palate. On the other hand, the harshness that hits the back of the throat distracts from those flavors and suggests that the tobacco might still have a ways to go to smooth itself out and become totally palatable. It’s not until there’s just about two inches left and the thought of putting the cigar down that the harshness dissipates and the cigar is left with a peppery, spicy and earthy flavor to carry it to its conclusion. At this point, it’s more spicy than peppery, with a big zing that is reminiscent of red chili pepper flakes you’d add to a pizza that is driving the flavor. 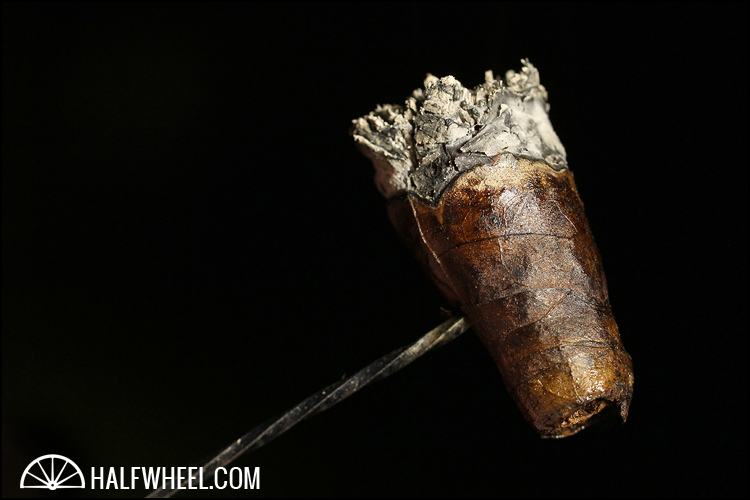 On its own, the La Flor Dominicana Chapter One is an interesting new direction for the company, with the Brazilian Ligero Oscuro showing some notes and aromas that I don't recall finding in many of their other cigars. There are aromatics that will force you to pay attention, and short of a few spots of roughness, the flavors are very palate friendly for fans of medium-full cigars without being quite as strong as some of the company's fullest body offerings, in particular the Double Ligero line. What is really interesting about this cigar is what it suggests for the next chapter of La Flor Dominicana, and gives it that much more reason to find a way into your humidor.