Just when I thought I was out… they pull me back in. One Corona out from a half century worth of Lanceros, and here is yet another one. I really hoped the La Caridad del Cobre’s Javelin could have been part of the fifty days of fun, but Frank Herrera wasn’t ready with his newest creation. But, a few days after the last one, the mystical double-pointed short rendition of El Laguito No. 1 was ready. The Story
A few months ago I made a half-hearted request for a La Caridad del Cobre Lancero, too bad Frank Herrera already had an idea. Frank’s father, who passed away twelve years ago, was a javelin thrower on the Cuban National Team. The cigar is called Jabalina, the Spanish word for javelin, and it looks like one. Frank had the rollers at Luis Sanchez’s La Tradicion Cubana make a double torpedoed free-rolled Lancero. This means no molds and two pointy caps for those that were a bit confused by the jargon. To put it lightly, the cigar is a pain in the ass to roll, very time-consuming and very difficult. The Javelin, like Frank’s core lines, will be offered in two wrapper choices, Pennsylvania Broadleaf and Ecuador. (The Broadleaf is a change from the Brazilian Arapiraca that I prefer that makes up the La Charada line.)

This is the Broadleaf rendition of the Lancero. It’s got the sheen and fading that I’d expect, but it lacks the thickness or the darkness that Broadleaf is known for, particularly the Pennsylvania variety. Veins are fairly heavy, but it simply add to the character of the appearance. Aroma from the Broadleaf is an aged leather and barnyard mixtures, medium-full. The roll is pretty good as far as free roll goes with no noticeable bulges, except for the bulbous foot. Lighting
The reveals a full aroma of cocoa, cinnamon and an aged and deep leather. Cold draw of the Javelin is… well tight. Flavors are a distinct peppermint with leather and cinnamon joining the medium-full flavor. I’m a believer in things come as the manufacturer wants them. I asked Frank just to make sure, but like so many of the other closed foots, I just light this normally. It takes a bit of time, but eventually all is well. After that process is complete, the Texas summer air is filled with a heavy toasty notes and sweet cocoa. The initial draw of both cigars starts almost identical: a great amount of smoke, dry cocoa transitioning to a bitter earth with pine; medium-full and long. First Third
It’s such a change of pace because of the draw. Rather than a typical tight draw, there’s a loose draw that still retains the looseness from the thinness. Flavor is an interesting mix of cedar, cocoa and spice with quite a bit of harshness on a leather note. An inch in, a delicate creamy and cotton candy mix emerged each time. Finish of the Javelin is cedar and a harsh spice with sweet creaminess, medium-full and long. Strength of the La Caridad del Cobre is medium, not even pushing medium-plus. Shown above is the ash, which is not done proper justice by the photo. It holds for an inch and a half and has a massive amount of seams.

Second Third
There’s a creamy toasty transition that proclaims the second third of the La Caridad del Cobre. Herbs and tea slowly begin to overtake the leather and cocoa, but the harsh pepper and cedar remain. Underneath the medium-full to full profile there is a hint of delicate nuts that seems wanting to escape, although it remains contained. Finish is herbs, tobacco, earth and nuts, it’s about average, the beginning of what is some needed time. 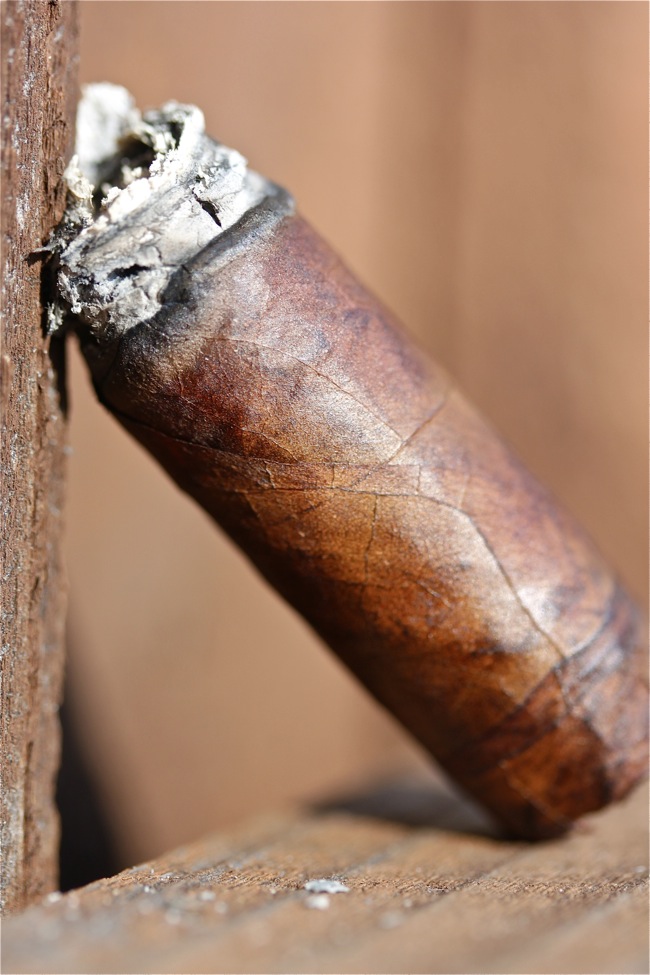 Final Third
There’s not a parting of the gates for the final portion of the Javelin, but there’s a noticeable change. The deepening nuttiness combines with a toastiness on top of bitter cocoa and fruits. It’s still full, however showing its youth. Finish adds some white pepper and toasty nuts, but is dominated by the lack of age. Temperature was always warm throughout bot the Javelins I smoked and with an inch and a half left it begins to slowly pick up, but nothing anywhere close to being concerned. Draw and other construction aspects remain identical and eventually about an hour and fifty-five minutes in.

For the Novice
Nope. It’s not the Ligero ridden cigar that much of the market’s current Broadleaf offerings, but the Javelin is still a solid medium, perhaps medium-plus. In the End
The Javelin is scheduled to be released at the show and will be a B&M only offering until October. It is such a change of pace. The entire feel of the Javelin because of the free-handed nature is so different from the rest of the Lanceros on the market. It’s a completely different smoking experience with the nature of how the smoke leaves the La Caridad del Cobre, but, it still has to be smoked like a Lancero. The Javelin is good, and it’s going to be better; but at this point, it needs more time. I think even a few weeks until it is released at IPCPR will help, but there’s still some time needed, although it’s relatively minimal from what I can tell. Still, at the end of the day, Frank Herrera & company has as winner.

88. Potential is not really the right word here, this cigar has it, the Javelin just needs a bit of time.