This year, August started with news of a new store exclusive for Michael’s Tobacco in Texas, a two-store operation with locations in Euless and Keller, about 35 and 45 miles northwest of Dallas, respectively.

The La Aurora Preferidos Diamond No. 1 is a slightly longer and larger version of the original La Aurora Preferidos Diamond that was released at the 2012 IPCPR Convention & Trade Show and began shipping later that year. Unlike the original release though, the No. 1 doesn’t come in a shiny black tubo but rather individual cellophane sleeves that are packed 25 to a box. That, too, is a departure from the original release, which came in eight-count boxes. While it hasn’t been explicitly stated, the tubos and box format difference could be two of the big reasons the No. 1 costs five dollars per cigar less than the No. 2, despite being an inch longer and four ring gauges thicker. 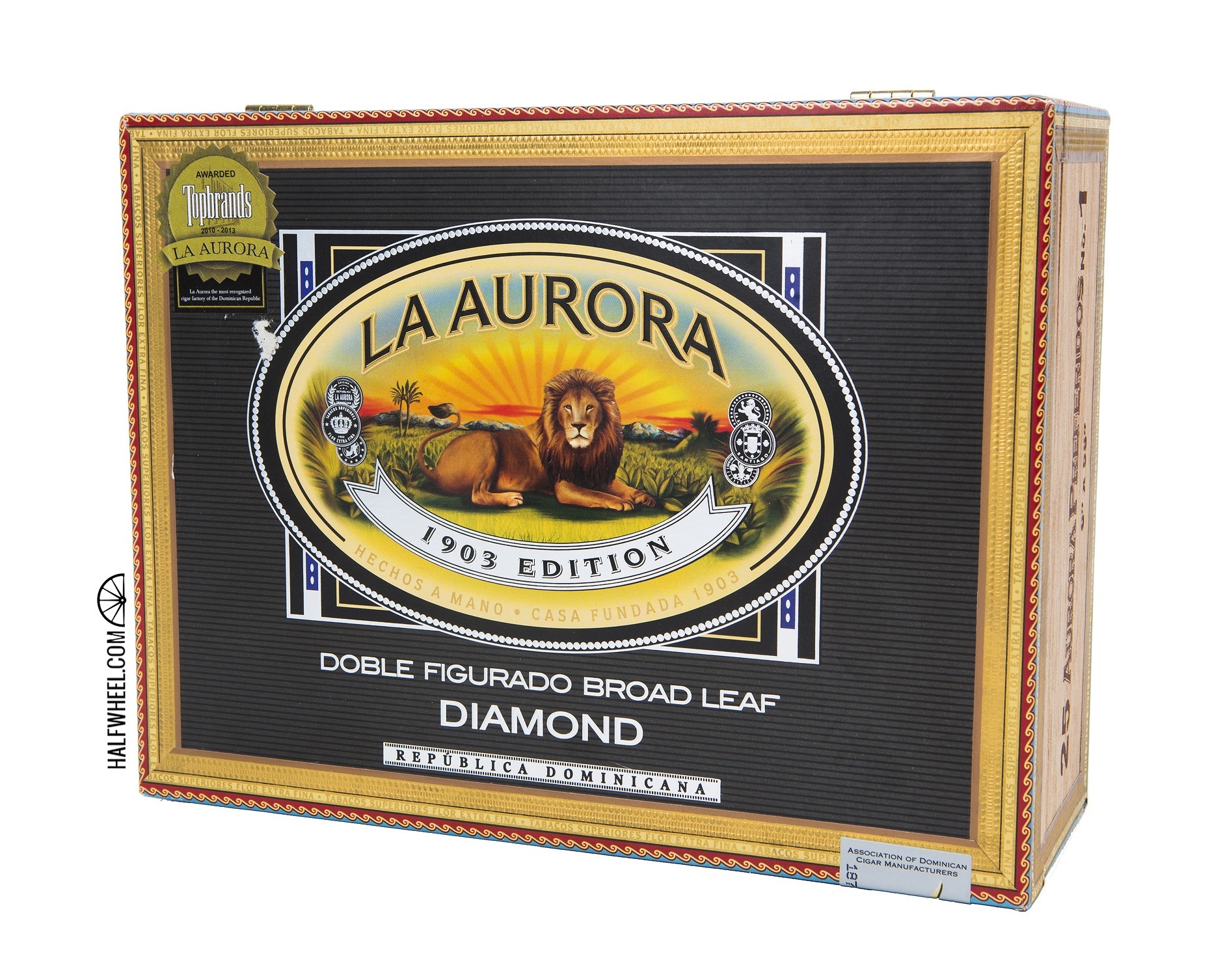 For further price comparison, that cigar came with a $12 price tag, three dollars less than the perfecto version made for Michael’s Tobacco. It also had more cigars produced, 150 boxes of 25 as opposed to 100 boxes of 25 for this release. In addition, a 5 1/8 x 42 was also made for Lenzo’s territory as part of a Preferidos Corona sampler. There’s a lot that stands out about the La Aurora Preferidos Diamond No. 1: the shape, the incredibly dark broadleaf wrapper, as well as the two bands, which is the most notable as the quality of the two wrappers is drastically different. The wrapper is also an eye-catcher, a rich dark brown that stops short of picking up black shades but is certainly close to it. The sheen isn’t universal and appears to come more from glue marks than an abundance of oils. On the first cigar, there are a number of imperfections with the seam, from spots where it doesn’t lie flat to a spot where a vein didn’t get cut cleanly and creates a bit of a scab. The other two samples are much better presented, with a large vein or two being the only visual distraction. Both the wrapped foot and head are fairly clean, with much more action at the foot of the cigar as far as seam lines. As far as firmness, the center of the cigar shows the most while the ends have just a slight bit of give. While the cigar is listed as a 6 x 58, the foot is about a 32 ring gauge, while the opening at the head measures between 30 and 32 ring gauge depending on where you cut, which for me tends to be closer to 32. The aroma from the foot is fairly complex, with a blueberry sweetness meshing perfectly with a wheat bran muffin base and smooth smell of chocolate syrup. The cold draw is varied from cigar to cigar—surprisingly easy and stopping short of being loose on one sample, a bit firm on another.

While it doesn’t jump out right away, there’s some delayed pepper on the lips and tongue that spices up the same notes found with the nose. A rich chocolate brownie note starts off the La Aurora Preferidos Diamond No. 1, slightly sweet but more so thick and chewy in the mouth. Pepper ranges from a subtle sprinkling to a non-factor on the palate, while the plentiful smoke has a bit that is picked up through retrohales and via the ambient air. There is a fairly quick mellowing of the flavors as the chocolate note fades away, leaving a bit of pepper on the tongue but not much beyond that until some dry cedar starts to come along with the burn line getting into the second inch of the cigar, which is also where the burn line starts to get a bit uneven, progressing more quickly up the front of the cigar than the back. The first clump of fairly bright white ash holds on throughout almost the entire first third, with its departure bringing on some changes that signal the start of the second third. Other technical aspects of the cigar have been great, with plenty of smoke and a largely even burn line. There’s a fair amount happening in the first puffs of the second third, with chalk and a touch of sourness coming into the mix, pushing out the very enjoyable chocolate notes that had been the core of the first third. White pepper starts to lead the charge in the nose and becomes the dominating impression with each puff, overshadowing the cedar-driven flavor. The burn rate also slows down quite dramatically in the second third, literally crawling through the sizable ring gauge of the middle section on the first cigar and slowing noticeably on all three samples. Touches of hazelnut start to emerge past the midway point, though on the first sample there’s a steady repetition of the chalky, sour note through the bulk of the La Aurora Preferidos Diamond No. 1 until the final puffs when the chocolate brownie note comes back in with the final third on the immediate horizon. After a physically taxing second third that took more effort than I generally care to put towards a cigar, a new level of complexity comes along as the ring gauge starts to shrink, with the residual chalk and sourness fighting to hang on while notes of wood and cocoa return along with a semblance of pepper and a bit of a nicotine punch. Burn issues hamper the progression in one sample, with a couple of relights required to get the cigar through its finale. The pleasant chocolate notes of the first third never return in full and a touch of a metallic undertone comes along that is the final nail in the coffin that the La Aurora Preferidos Diamond No. 1 has been building since that first clump of ash broke off over 90 minutes ago. Between the time, fatigue and flavor, it’s hard to find the motivation to take this cigar down to the nub, and I generally call it good with between a half and three-quarters of an inch left. After finishing all three samples for this review, I went back and took a look at the review of the original La Aurora Preferidos Diamond to see how similar my experience was to Brian Burt's, and while there were some a number of similarities, there are also a few differences for which I struggle to assign blame. It's hard to think that the slightly larger ring gauge could have had as much of an impact as it did, which leaves the difference in age. Maybe it's a combination of the two, maybe it's not; either way, the larger ring gauge didn't seem to help this blend and instead gave it a fairly unpleasant taste for the better part of it, as well as making it a much longer cigar to get through. Hopefully these issues are isolated to my experience or time will remedy them, but as it stands now I'd lean towards the smaller and unfortunately more expensive original version.