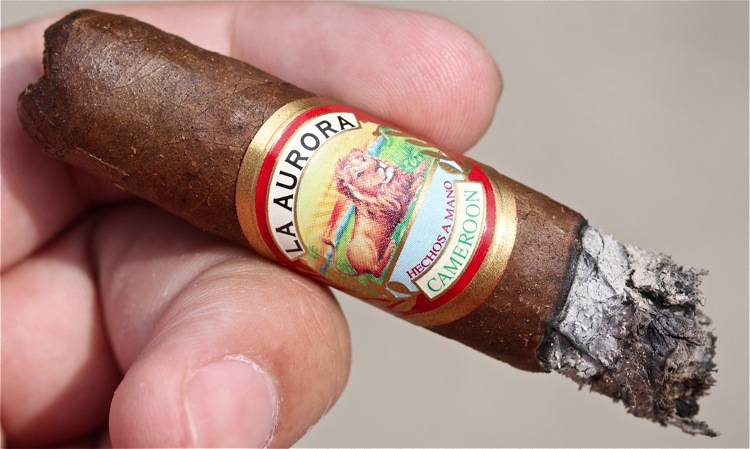 We all know La Aurora’s line of Preferidos, the amazing Perfecto shapes that the company has made for years. So how do you make a Perfecto Lancero? Well, you don’t. You take the blend that is used for the Preferidos blend, in particular the Cameroon Preferido, and make it into a parejo, this time a lancero. While the Preferidos Lancero was introduced in 2008 at the IPCPR show, the first parejo was actually the Preferidos Cameroon Robusto, introduced a few years earlier. While the Cameroon Lancero is a regular production La Aurora, W. Curtis Draper commissioned a “Maduro” Lancero with a Brazilian wrapper last year for the store’s 123rd anniversary. 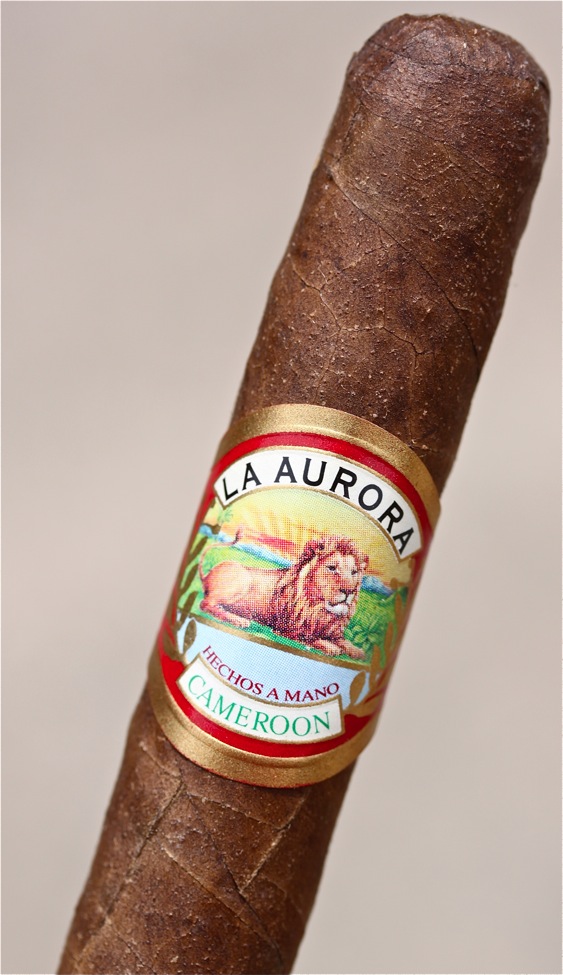 The African wrapper is a solid milk chocolate with a good amount of sheen. There’s an average amount of veins on the Cameroon wrapper, which is normally rough. Still, La Aurora turns out a good looking cigar. Aroma from the wrapper is classic Cameroon barnyard, earth and nuts; full. Packing is good producing an average resistance to the touch. From the foot of the Preferidos it’s a mix of nuts, wine, perfume and an overwhelming classic Cameroon similar to the wrapper.

After a v-cut on the cap, there’s nuts, butterscotch, grass, perfume and white pepper, a diversity of medium-full aromas. Cold draws have a great resistance with the La Aurora placing nuts, gingerbread, meatiness, a sharp red wine and perfume up front on the medium-full mixture. Lighting the Preferiods Lancero gives off a classic barnyard aroma. First draws begin with nuts transitioning into a toasty barnyard mixture that is quite hearty and full. The La Aurora starts with toasty grass, sweet nuts, aged tobacco and brown sugar. It’s awesome and full. Retrohales deliver the classic Cameroon wasabi pepper, a great contrast to a relatively sweet and earthy core. Finish is cedar, earth, tobacco, toastiness and a bit of the harsh pepper; full in strength and medium in length. Draw is good with an awesome amount of toasty oak smoke. The burn is utterly consistent, despite the thick wrapper, a kudos to what La Aurora can do.

It changes: grassiness, brown sugar, nuts, espresso, cocoa and pepper. Still full and still good, just like the first third. The Preferidos Lancero brings toastiness, cedar and coffee on a much more concentrated full and lengthy finish. Most of the rest of the La Aurora remains a same, which while seemingly boring is actually quite a good thing. This translates into an awesome amount of smoke production on a good draw, full body on medium strength and an inch of light colored ash. Active is the way I would approach describing what goes on here. The core is generally nutty, but everything from espresso, orange peels, wine, meatiness, leather, butterscotch and caramel. It’s a long list, but it’s a good list. Whatever you get, it’s going to be full and it always seemed full. Finish is equally unpredictable, but cedar is generally the more dominant note. Like the first two thirds, the last bit of the Preferidos Lanceros is consistent and good. This is one of those cigars you smoke until your finger burns, they are that good, and that is my intention every time. The La Aurora Preferidos Cameroon Lancero is my favorite cigar that bares a La Aurora band. It's got great complexity, and more importantly a refined balance that great Cameroon has. This is one of the Lanceros that I smoke a lot of and will continue to smoke a lot of, because of how good it is. The foot of the Preferidos is always interesting looking, but it provides a consistency quality construction each and every time I smoke one. And flavor? Well it's one of the best on the market.