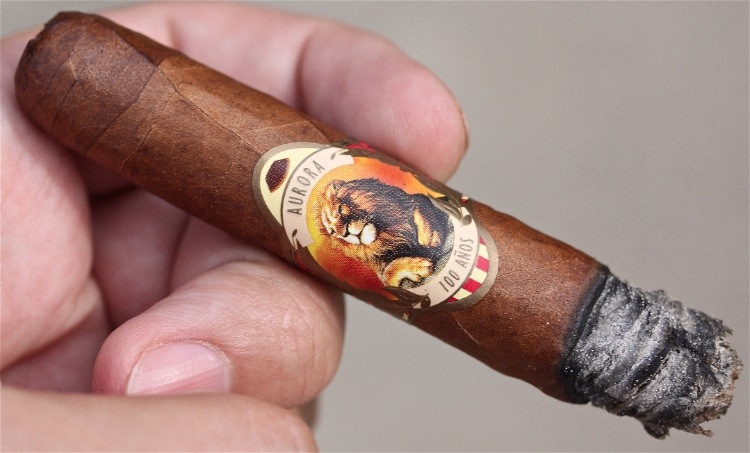 If asked what blend is the collective pride of La Aurora, Cien Años. Not much thought required. While the Don Fernando is without a doubt my favorite cigar to come out of the La Aurora’s factory, Cien Años would be my opinion for the company’s choice itself. It makes sense, the line created to honor one century of the Dominican’s oldest cigar factory. It has long been a challenge for me, as in many formats I’ve never seemed to gain the appreciation that many, notably La Aurora’s former Director of Sales, José Blanco, has had of this cigar. Still, I tried my best to wipe the slate clean and start over fresh. 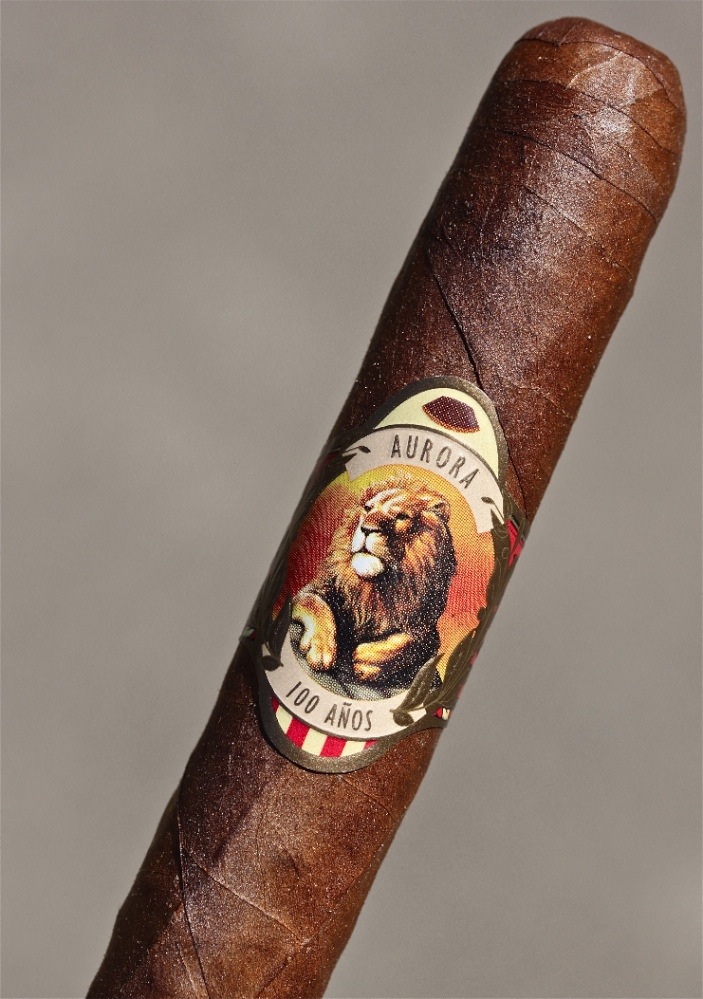 The Story
Cien Años was released in 2004, La Aurora was founded in 1903. Yes, the math doesn’t add up. Paying tribute to their their soil, La Aurora sought a Dominican puro, something even to this day not common. While the filler and binder were both from 1996, the Corojo wrapper just wasn’t where the team at La Aurora wanted it to be by the end of 2003. However, La Aurora did make a cigar with Dominican Corojo on it in 2003, the La Aurora Excepionales. Released in one size in fifty count cabinets for Manhattan retailers only, the Excepionales used the exact same wrapper as the Cien Años. Michael Herklots, now of Nat Sherman, was noted for having helped in the blend while he was at Davidoff. While the wrapper was the same, the cigar was not a Dominican puro, as a little Nicaraguan filler was used. In 2004, La Aurora released the Cien Años in four formats: Belicoso, Churchill, Corona and Robusto. Early 2009 saw the introduction of the famed Preferido size and the 2009 IPCPR saw this cigar, the Lancero introduced. The exact amount of Cien Años released is still unknown. (I imagine I know someone that knows the number, whether or not Guillermo (León) will tell me is a different story.) The claim is a total of 15,000 Lanceros, take it fort what it’s worth. Just a side-note, while the Lancero and Preferido both used the same tobacco, they did not carry the identification number that four formats originally had.

The Cien Años rendition of the Lancero is both shorter (6 7/8) and thicker (40) than a traditional El Laguito No. 1, a common trait out of La Aurora. I can’t complain about the wrapper, great reds on top of light leather from the Dominican Corojo. Veins are light, and while there’s no pigtail, this is a good looking cigar. Aroma from the Dominican puro is leather with some sour barnyard notes, still full, just like intended. The roll is quite pretty, with a hefty firmness to the touch. From the foot of the Cien Años I get a full mix of pepper, earth and leather, quite intermingled amongst themselves. Lighting
Cold draw is good, with nuts, perfume and a harsh earth comprising of the medium-plus flavor. Lighting produces an aroma with a fairly prominent toasty note up front, surrounded by hints of perfume and nuts. The first draw from the La Aurora starts a bit tight with a deep nut flavor before adding an orange peel note. Finish is quite similar: nuts up front with orange peel and a sweet earth finding itself into the medium-full and lengthy mix. 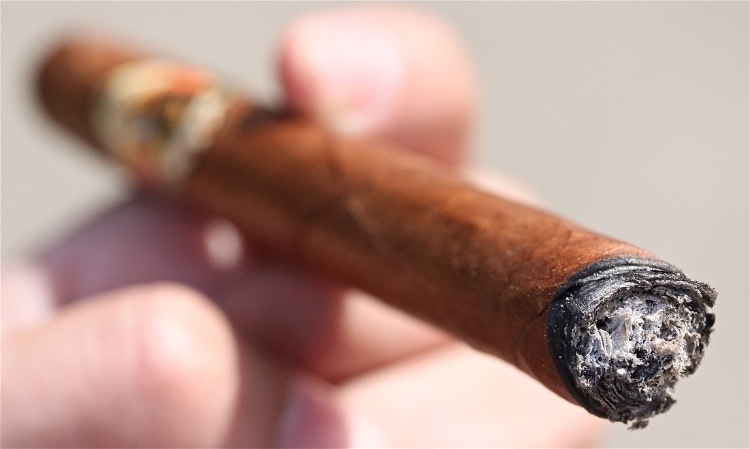 First Third
Flavor? It’s not lacking in quanitity or concentration. A full mixture with earth and cedar up front, hints of leather, and a sharp black pepper serving as the great contrast. The La Aurora’s finish is dominated by leather with secondary notes of oak, herbs, natural tobacco, cedar and a familiar pepper. It’s full and lengthy, on par with expectations. Each draw produces a fair amount of smoke to the palate with a slightly improved quantity outside filling the moist summer air with toastiness and spice. And then it hits me, my greatest frustration with the Cien Años Lancero, the draw. I’ve had quite a few and none have had phenomonel draws. Some avoid being problematic, but this one seemed like it was going to be on track towards needing help. 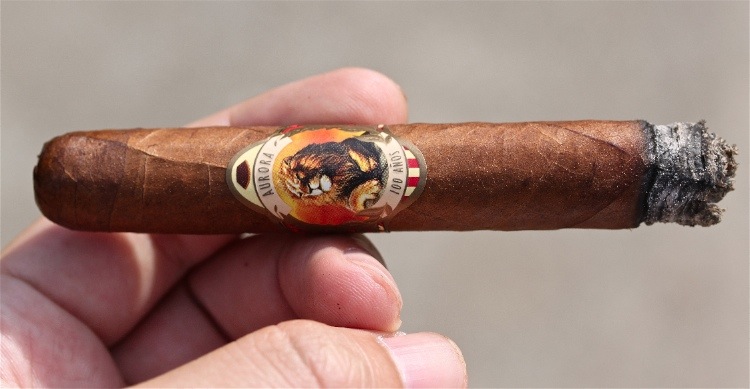 Second Third
The middle portion of the Cien Años is a pecuiliar mix of espresso and a toasty earth. While the pepper note loses a bit of its power from the first third, a delicate floral note shows itself, an absolutely classic contrast. Finish brings out the flavors from the La Aurora Lancero: cedar, nuts, aged tobacco (go figure) and harsh pepper; full and long. Draw issues remain forcing a pair of pokes from the draw tool, although smoke production never falters. Instead the outside aroma takes on a floral and nut combination. Strength takes a noticeable increase, going from the medium range to comfortably in the medium-full. Final Third
Complexity builds a bit and then it falls off. The espresso, earth and cedar allow for some molasses and herbal notes, but then it just mixes into one note, something I couldn’t really seperate. Finish is a bit better, even after the core molds together, there is still seperation of the cedar, herbs and tobacco, but it’s not like the second third. Draw remains consistent, tight; but so does smoke production. I’ve never had an issue with a Cien Años not buring extremely well, and this is no different. With about an inch and a quarter left, I place what’s left of the Cien Años Lancero next to the dark ashes it created.

For the Novice
José Blanco, the master teacher. José will tell you that just because it might be thinner and appear to have less tobacco, it doesn’t mean it’s “lighter.” See, as I’ve explained a few times here in the written word, the smaller the ring gauge, the more wrapper to filler ratio. When you have a cigar that has a strong wrapper, that means a stronger cigar. Case and point is here. While this is no where close to being full-plus, this is not light. If you have the oppurtunity to buy a Cien Años, pick a few up, you’ll never know when the next time you may see them will be. But, if you are finding a cigar to smoke now as a new smoker, this is not the right choice. 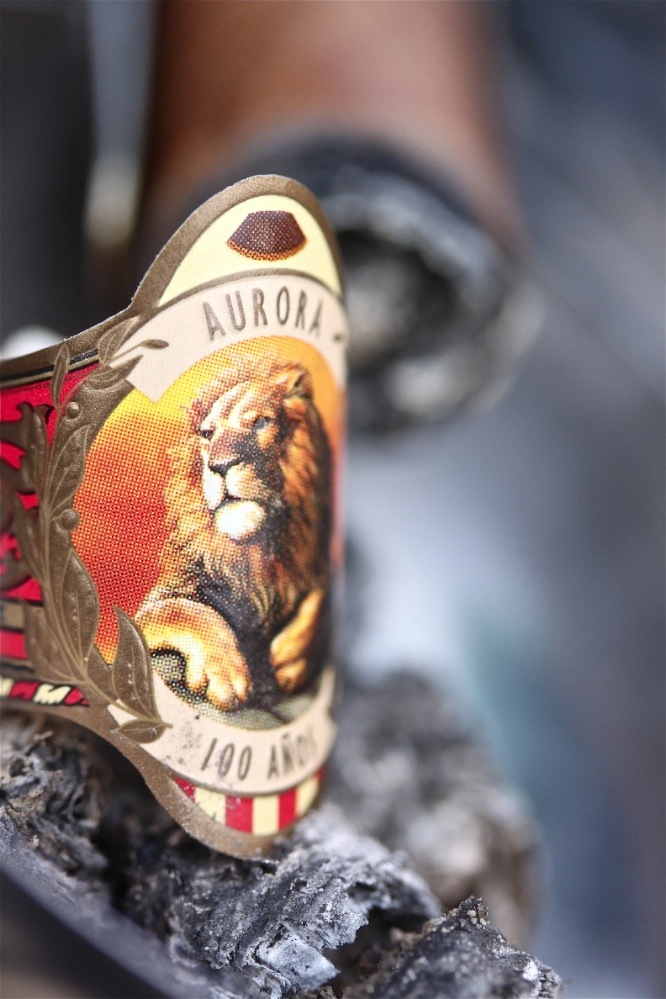 In the End
This is about as good as the Cien Años has gotten for me in this format. I wish I could say that I love this cigar like many of my friends at La Aurora do, but I can’t. By far my least favorite vitola of the line, for whatever reason I cannot find the balance that I would like here. The Cien Años Lancero has good flavors, but for me the Puro just can’t arrange them well enough. The draw, while annoying, isn’t a huge turn off, as smoke production remains quite good; but it could be better. I don’t know, I’ll just stick with the Corona, Churchill and Preferido.