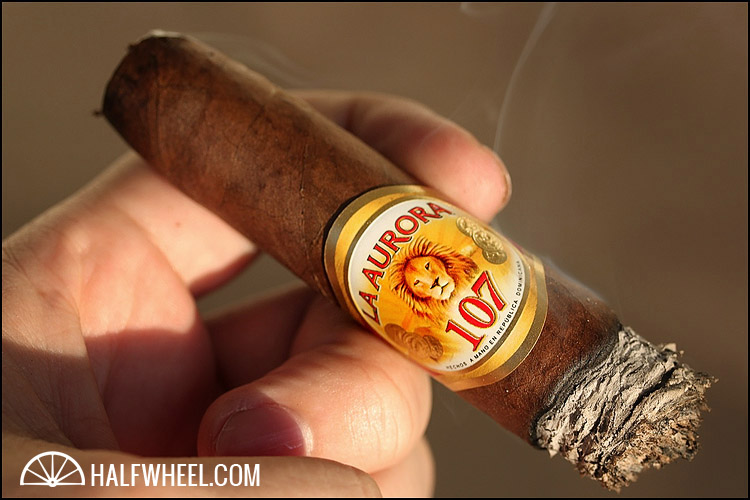 These two additions would bring the La Aurora 107 portfolio to eight different sizes.

As we announced yesterday, these will be a larger limited edition later this year with plans of 1,000 boxes of eight cigars going to select retailers. So far, no release date is available, but La Aurora’s main focus right now is taking care of the still unreleased La Aurora 107 Maduro which is now expected to be arriving on shelves in February, after a soft launch at Cigar King this past December. This would presumably mean that the 107 Puro Vintage would be likely from spring to the IPCPR Convention & Trade Show in August. 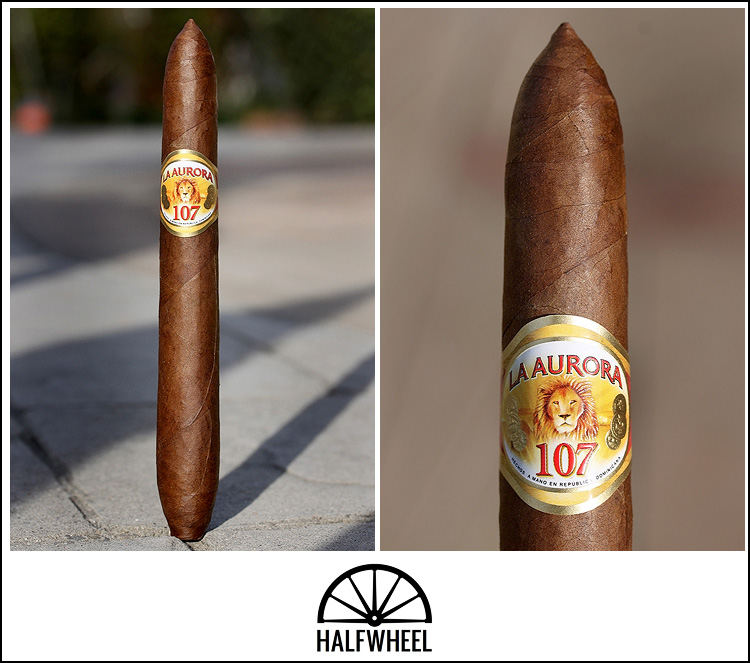 The La Aurora 107 Puro Vintage looks rather stunning. The Puro Vintage 2003 never had the oily red wrapper that shined like the La Aurora 107 and the Puro Vintage 2004 doesn’t have the same effect given its smaller size. Unlike the La Aurora Gran 107, the Ecuadorian wrapper on this cigar is uniformly flawless with no massive veins, no rough spots and a seamless color that is only interrupted by the lighter veins. These aren’t packed in cellophane, which means the aroma coming off the wrapper of the Puro Vintage 107 isn’t strong, but there’s a noticeable earth, coffee and aged tobacco aromas—staples of the 107 blend. Cold draw from the gigantic figurado produces a medium-full coffee, earth and cedar—and is rather open. For those subscribing to the method of clipping both ends of a salomon, a concept that I never subscribe to, there’s really no need here. The draw is medium to open and by far the easiest of any salomon I’ve had.

The La Aurora 107 Puro Vintage begins with a stronger profile than the rest of the vitolas of the line. Dark roasted nuts slowly bitter with coffee, earth, massive amounts of creaminess and nuts combine for a full flavor. Keywords at the start are robust and hearty, although smoke production struggles somewhat. Some sweet cocoa and a touch of pepper add to the mixture of dark roasted nuts and coffee define the remainder of the very enjoyable first third. The draw is fairly open, something that doesn’t thrill me, and with smoke production inconsistent, I really would have liked a tighter draw across both of the La Aurora 107 Puro Vintages I smoked. 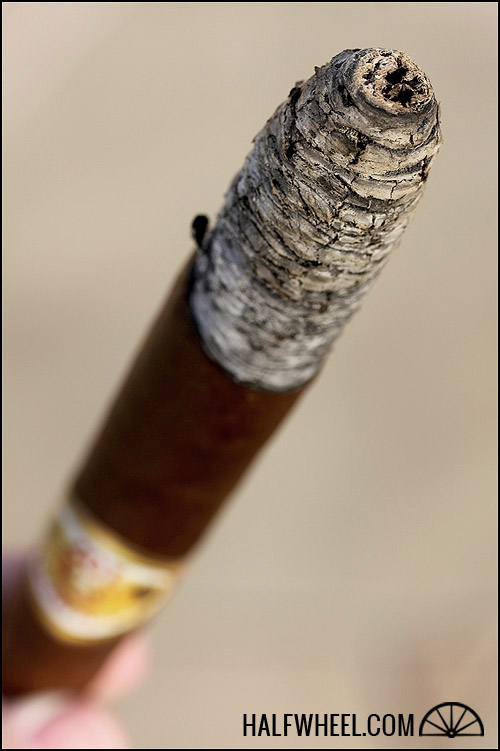 By the time the second third rolls around, the construction is impossible to miss. Nearly two inches of beautifully layered ash hang on before landing in an ashtray. The Dominican-made cigar is a shining example of what La Aurora is capable of construction-wise. The flavor profile doesn’t change much. When it does, it’s harsher, less sweet and with a more defined pepper, not as detailed as the first third, but still rather enjoyable. Strength is settling in right around medium, with a pretty quick puff rate and body is a bit above that: a lot of tobacco, but not much punch.

As the final third starts, the youth is apparent. The final inches on both cigars I smoked are chewier before falling apart flavor-wise. There are brief moments where sweetness or cedar regain control of the flavor profile, but for the most part, the 107 Puro Vintage is young tobacco. On the second example I smoked, I decided to actually let the cigar go out with an inch and a half left just to see if purging it, a practice that normally destroys the flavor profile, would help it. Not really sure if that helped. It’s a sad end to what was a rather impressive young cigar. 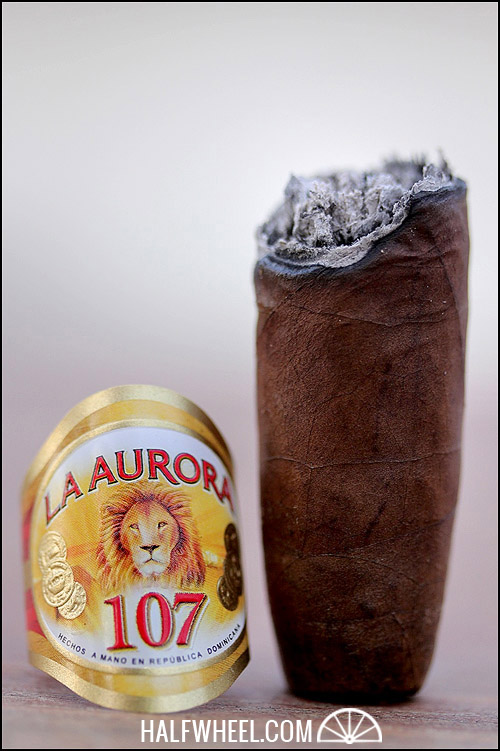 The first two thirds of the La Aurora Puro Vintage 107 were amped up versions of the popular blend. The last third was just disappointing. If it wasn't for your viewing pleasure, both would have been ended a lot sooner. In my opinion, this cigar needs a few months before the extreme youth of the final third will be resolved, but that's just me. I think this will ultimately be resolved with the actual launch, but the contrast between the first two thirds and the final was a bit aggravating. In current form, I'd still take the La Aurora 107 Corona and La Aurora 107 Lancero (in that order) over the La Aurora 107 Puro Vintage, but time could easily change this.