In late 2011, the long-awaited and much-anticipated Four Kicks debuted from Crowned Heads, the Nashville-based company formed by Mike Conder, Nancy Heathman, Jon Huber and Michael Trebing, all former CAO employees. Four Kicks would be their first line, made by Ernesto Perez-Carrillo Jr., and originally debuted in four sizes.

Huber told Brooks back in November:

Shortly after the original four sizes shipped in November, Huber et al. announced that there would be a fifth size added to Four Kicks in 2012, followed by an announcement of a new line. By early 2012, the size was known as Selección No.5, i.e. the fifth selection or size, a 6 1/2 x 44 Lonsdale.

Huber explained the reason for the thinner vitola:

I’m a fan of classic sizes. I’m not a big RG fan. I believed the smaller RGs in the Four Kicks blend showcase the flavors more. (In order of appearance)

As with the original Four Kicks, Selección No.5 will debut at UPtown’s Smoke Shop in Nashville, TN. The event, which is tomorrow April 27, 2012, will benefit Operation Stand Down Nashville. And here’s the official Crowned Heads trailer for Four Kicks Selección No.5:

Like the rest of the Four Kicks line, Selección No.5 comes in boxes of 24. 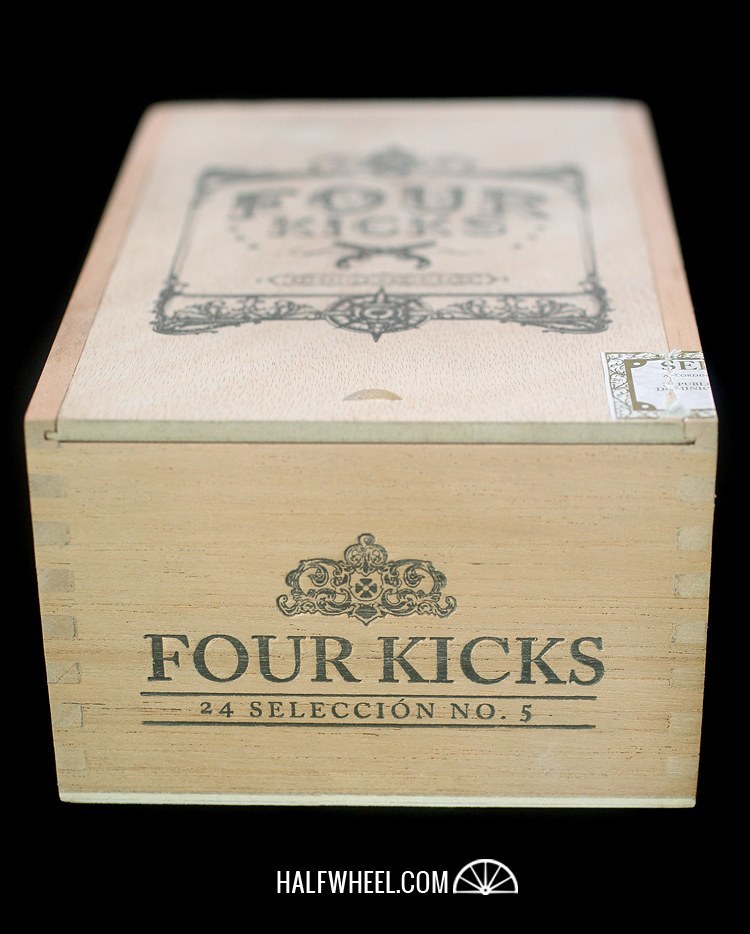 Amongst the vitolas, Selección No.5 is the cleanest. The Ecuadorian Habano wrapper is applied near seamless and the smoothest and best-looking of the Four Kicks family despite a few watermarks. Given the lack of cellophane, I was a bit surprised at how strong the aroma is: earth, cocoa and a touch of barnyard with some underlying sweetness. It’s quite pungent and quite enjoyable. The foot provides a great contrast; significantly sweeter than the wrapper itself with notes of sweet graham cracker, cocoa and roasted nuts playing against the strong pungent leather from the wrapper. Cold draw is intriguing with the Four Kicks providing a dry profile of sweet earth, bits of cedar, some creaminess, sour leather and even a bit of a note that seems particularly reminiscent of twang.

The Four Kicks Selección No.5 begins the first third with a hearty and dry bittersweet nuttiness that continues to dry with some added leather and a touch of grapefruit. Without a doubt, the initial three puffs of each of the Lonsdale format are the most complex of any Four Kicks I’ve had, there’s not a lot of flavors, but they are doing a lot of different things. Unfortunately, after the five minute mark, the harsh black pepper that has been so synonymous with my other Four Kicks experiences takes over. The core is still nuttiness and leather with accents of creaminess and cedar underneath, but the pepper note dominates the lengthy finish enough that it’s a challenge to appreciate the other notes. Fortunately, by the second third the pepper retreats. The core is a more mature nuttiness and sour leather, rather reminiscent of some of the cold draw with the nuttiness turning sweet into the finish thanks to some creaminess. In place of the pepper, which is still barely present, is a great array of spices that compliment the flavor profile wonderfully. While the flavor is overall much tamer, it’s a lot more enjoyable and still in the full category. As for construction, the ash can hold on a lot longer than it should and the burn is about as good as it gets. Draw and smoke production at times are phenomenal, but the Four Kicks makes you pay attention as the draw tightens in wave-like patterns and across all three Selección No.5s I smoked, I was concerned the cigar was going to go out any minute thanks to the odd smoke production. The final third of Selección No.5 is an interesting take on the former third. Gone is the intertwined sweet nuttiness, as the two notes seem to separate themselves much more. The spices move up front a bit more and the cedar plays a much larger role in the flavor profile. There’s some coffee notes and much more of a generic tobacco, but the flavor is still full and still developed. Construction remains much like the prior thirds and strength is back at the medium plus levels from the first third after peaking in the medium-full range in the second third. Despite the near universal love, I wasn't entirely sold on the first four vitolas of Four Kicks. The harsh pepper destroyed to much of the rest of the profile for me. Selección No.5 has the least amount of any of that harshness, although I recently smoked a Piramide from the first batch that definitely was improving, and as such I got to enjoy the other flavors in ways that just didn't happen with any of the other four vitolas. Still, it's there in the first third, and I'd much prefer it not to be. If you were part of the seemingly quiet minority that was not a fan of Four Kicks, and it wasn't because of the harshness, I doubt Selección No.5 is going to change your mind, because the reality is that Selección No.5 is best described as an amped up Four Kicks.