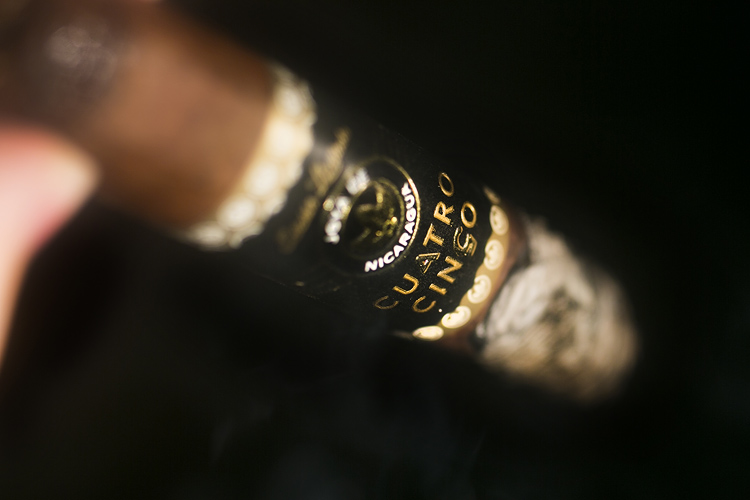 The press release covered a host of details:

Joya de Nicaragua has made it clear that limited editions are not the company’s focus. As such, this is the first limited JDN product of recent memory with Cuatro Cinco limited to 4,500 boxes of 10 cigars for the 6 x 54 Nicaraguan puro.

The boxes, which are individually numbered, look like this:

Cuatro Cinco launched this past weekend with two events in the Dallas area, both attended by Dr. Alejandro Martínez Cuenca.

The first thing you notice about Cuatro Cinco is the band, it looks great, particularly against the dark wrapper. There are obvious roll lines on the thicker Nicaraguan wrapper, but it appears to be rolled clean. On all three cigars, I got a distinct candied blueberry note alongside a leather. Interestingly, the blueberry note also made its way over to the cold draw, although in lesser form, there’s also some leather and soft pepper to combine for something that registers medium-full to me before lighting.

The first third of the Joya de Nicaragua anniversary cigar begins with some sweetness before a crisp espresso and redwoods combination takes over the profile. A familiar soft pepper is towards the back of the throat, but I wouldn’t put any money on it staying there. The redwood note sticks around for the entire first third being joined by a somewhat bitter orange note with a cayenne pepper on the back of the throat. There’s not a laundry list of flavors, but there’s a medium-full flavor, each with great detail. While the smoke production is fine, the burn is moving extremely quick and the draw has opened up a bit more than I’d like—no doubt related. Strength-wise, it’s apparent from the get go there’s a good bit of nicotine here, but I don’t detect it on every draw.

On all three samples I smoked, the burn began to need correction midway through the cigar, it’s an annoyance, but the smoke continues to pour out and the flavor is progressing. A nuttiness sporadically intertwines itself to the woody core—which is less redwoods than before—and the cayenne pepper notes remain in even stronger notes. There’s still an underlying sweetness, as well as a roasted note, which add some depth. Construction-wise, things are much the same, the draw is still open, the smoke still flowing and the Cuatro Cinco still burning very quickly.

I didn’t have consistent experiences with the final third of the Joya de Nicaragua. On one cigar, it seemed much like a continuation of the Cuatro Cinco second third. Another got a heavy dose of woodsiness and creaminess and the final one saw the orange note return to join the woody core. All three were enjoyable, although obviously different. Outside of flavor, the rest of the experiences were similar: the smoke production dies around the one-inch mark and the flavor goes with it.

When you look at Joya de Nicaragua’s last few releases, we’ve seen a trend. There was Cabinetta in 2010, CyB last year and Rosalones which has trickled out into the U.S. market this year. At best, these are medium cigars, a far cry from what Joya de Nicaragua has become known for in the U.S. Mild cigars are important—it’s a much bigger market—and Joya de Nicaragua has made some good ones, but it’s not really Joya. Fortunately, Cuatro Cinco took some of the finesse the company has exhibited in the aforementioned releases and added it into a profile that is more Antaño. The result is a cigar that makes you smile, and then feel the nicotine, the way it should be. Without borrowing a new name for another vitola in the portfolio, Cuatro Cinco is the closest thing Joya de Nicaragua can roll to a Lamborghini.