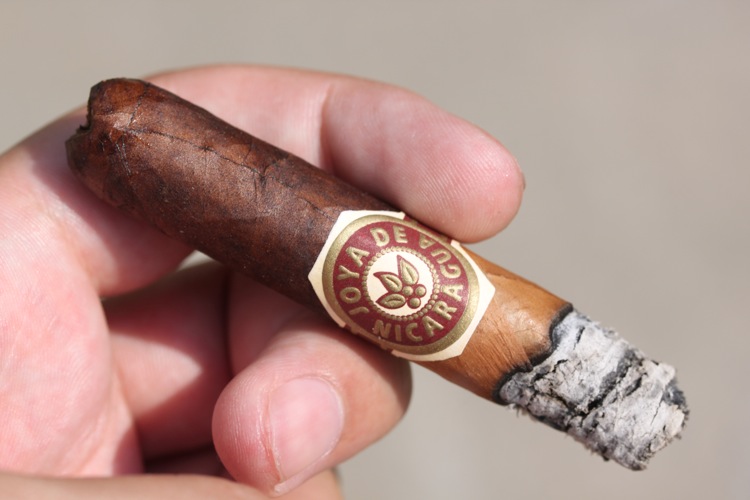 Quietest release of the year? Yes. Drew Estate acknowledged that they literally said nothing when they released this cigar in early May and I’m a bit unsure why. For those that are unaware, Drew Estate handles U.S. distribution for Nicaragua’s oldest cigar company, Joya de Nicaragua. Despite their “oldest man in the room” status in regards to Nicaragua, Joya is a mystery to quite a few smokers. Noted for their strong blends, Cabinetta is sort of a change pace from their popular Antaño 1970 and Dark Antaño lines. Anyways after the jump, thoughts on the fifth and newest size of the Cabinetta Serie, No.13. 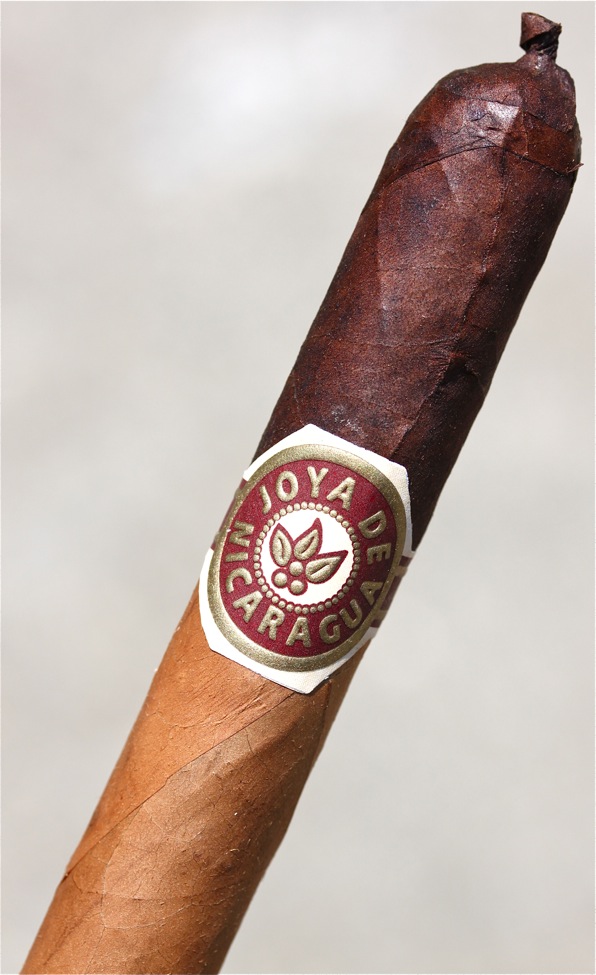 The Story
No point in reinventing the wheel, the JdN site explains the history as the following:

Established in 1968, we have the privilege of being the very first Nicaraguan cigar factory. For more than 40 years, we have been dedicated to the art of handcrafting cigars. We have preserved a traditional style of cigar making, and the use of robust Nicaraguan tobaccos in our blends have been a hallmark of our company.

An early 2010 press release covers about all one would want to know about the Cabinetta Serie:

Esteli, Nicaragua – Joya de Nicaragua, S.A. (JdN), the makers of the respected JOYA DE NICARAGUA® brand of premium handmade cigars, announced today that they will continue to slowly expand their release of their Cabinetta Serie® line to select retailers. Well known for their powerhouse Antaño® line, the Cabinetta Serie is an unexpected departure from their classic full-bodied style of blends. This new blend is a marriage of a creamy, milder filler recipe of tobaccos complemented by the spicy taste sensation of its unique double-wrapped, Habano- Seed leaf head.

It was due to this dramatic difference from any other Joya de Nicaragua cigar that it was initially decided to release the product on a store-by-store basis. “We believe it is important to not only explain this cigar and its blend to each retailer, but to share this smoke directly with cigar consumers. It is an exceptional smoke, but the customer who is expecting Antaño may not be satisfied, while connoisseurs who might not typically select a Joya de Nicaragua given their notoriety for strength may avoid even trying it out. This would be a terrible shame as it is an exceptional cigar of mild-medium body,” explains Michael Cellucci, Vice President of Drew Estate. Drew Estate is the exclusive importer and distributor of the Joya de Nicaragua brand in the United States. He adds, “We believe educating everyone about this cigar is critical, so we decided to not adopt the typical, nation-wide release approach with this product. Although launched during the late spring of 2009, we did not display it at the IPCPR, nor have we offered it for general sale. To date, it is only available at seventy-five Class A tobacconists, but almost all are experiencing brisk sales of this new cigar. We believe this type of release is in everyone’s best interest and we intend to continue the practice of slowly expanding its availability during 2010.” At first glance, you will notice the Cabinetta Serie features two wrappers, a top-grade Equadorian Shade which covers its entire length with the head then finished in a second cover leaf of rich, Nicaraguan Criollo. Aptly named by the factory as “Dos Capas”, this technique allows the smoke itself to be creamy and smooth, yet provide a spicy flavor for the consumer without making the smoke itself to strong. “Unlike the common, double-wrapped ‘barber pole’ cigars, which is primarily for appearance sake, this Dos Capas-style actually offers the cigar smoker a different and unique flavor and aroma,” states Dr. Alejandro Martinez Cuenca, JdN’s owner and master blender. The Cabinetta Serie is cello-sleeved and is available in 24-ct, sliding lid boxes in four sizes:

Dr. Alejandro Martinez Cuenca continues, “We at Joya de Nicaragua have always been known for creating full flavored, full bodied cigars in our Antaño line. I found that there was a demand for a cigar that the consumer could smoke at any time of day. Because of that, we’ve created the Cabinetta Serie; this cigar was exactly what we were looking for, something that’s not too strong, but still has that distinct Nicaraguan flavor profile. This cigar is almost always my first of every day. As for Drew Estate’s decision to continue introducing it slowly into the marketplace, I am confident that it is the right decision for this particularly unique cigar and will afford it the opportunity to be sampled and enjoyed by all.”

Drew Estate had Cabinetta Lanceros floating around their offices for a few months and at some point decided that releasing them would be a good idea. My understanding is that in late April or early May these started shipping to retailers. I really had no clue what they are when I first opened a surprise package from Jonathan Drew a month ago, but a bit of research explained just exactly what was going on.

The most striking feature of Cabinetta Serie is the combination of wrappers that adorn the El Laguito No. 1. The Nicaraguan Criollo (the top) has a dark coffee texture with decent reds and quite a bit of depth. The Ecuadorian Shade (the main) features a mustard tone, a thicker than most of what comes out of Ecuador. Veins are relatively light, magnified by the slightly rough roll. Aroma from the foot of the Nicaraguan creation is mainly nuts with dark herbs, earth and spices rounding out the medium-full profile. 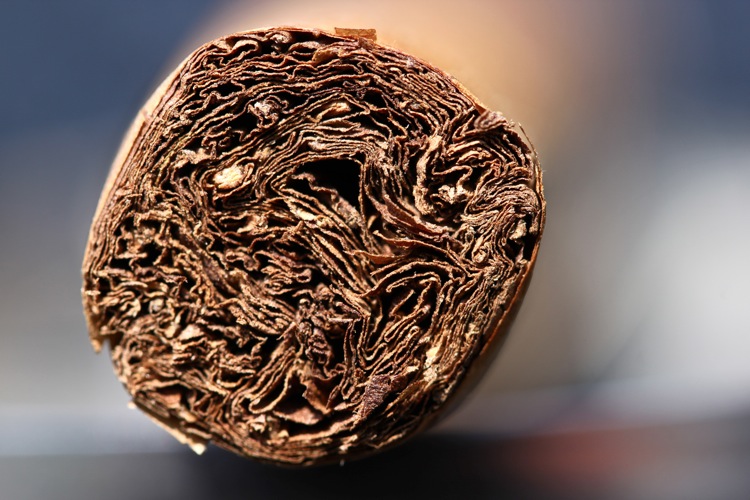 Lighting
I’ve tried my two different cut methods for a Lancero on the Cabinetta No.13, and I’m still a large fan of the V-Cut for these. The head gives off sweet cocoa (think hot cocoa), spices and earth somewhere around medium-full. Cold draw of the Joya de Nicaragua is perfect in terms of tightness producing a medium-plus sweet cocoa, earth and tobacco flavor. As I light the Joya de Nicaragua the Carolina summer air picks up toasty notes with hay and nuts rounding out the aroma. First draw is tight with initial flavors of a chewy toasty and dry cocoa note adding pepper before finishing out the medium-full flavor profile as spicy cedar. 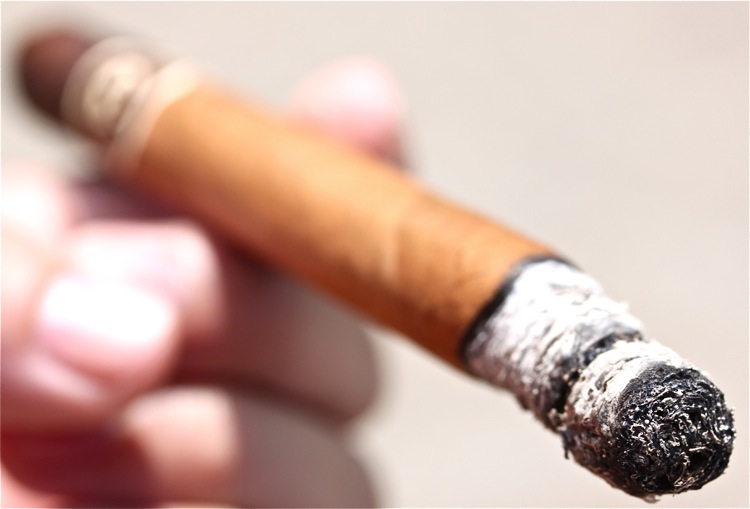 FIrst Third
The JdN starts with cedar, sweet nuts and an interesting espresso and cocoa mixture; medium-full. Finish sees a bit more of the espresso, with cedar and tobacco rounding out the slightly above average length. Draw is still tight, but there’s a pretty good amount of layered cedar smoke. Strength is mild to medium, even a bit lighter than most of the Cabinetta Serie that I’ve had. Burn is good with two inches of medium-colored crooked ash hanging on at a time. 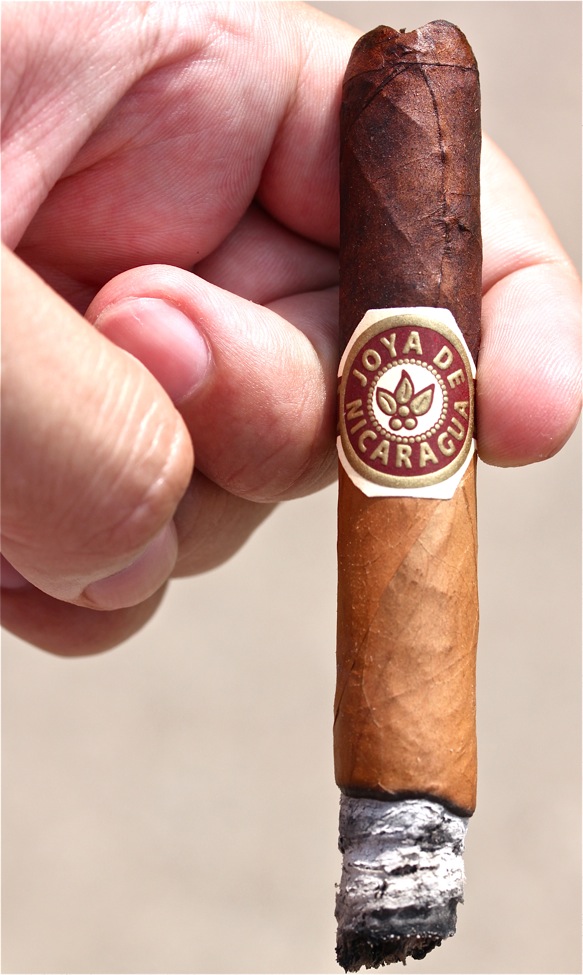 Second Third
It’s a bit of a change of pace as the Cabinetta Serie changes to herbs, sweet nuts and a deep tobacco flavor; still medium-full. Finish is a harsher herbs, nuts and cedar. Draw loosens a bit, but the Joya de Nicaragua is still a bit tight. Aroma changes to a much more nutty note with roughly the same smoke production as the first third. My only complaint in the four of these that I smoked is that the smoke is a bit warmer than I would like. It’s not a huge problem by any means, but it is something that I noticed, particularly starting at the halfway point. 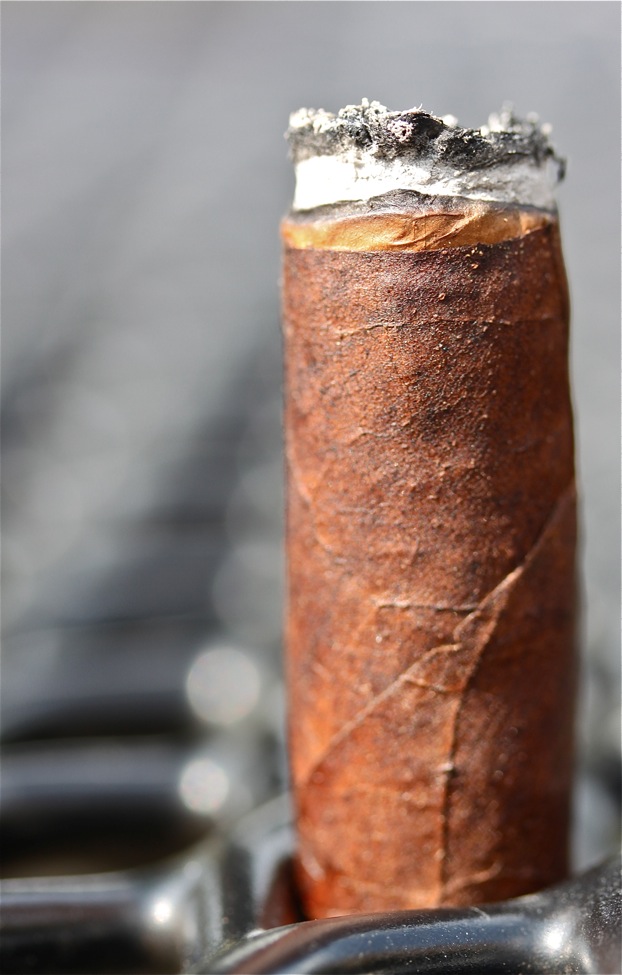 Final Third
A bit sweeter seemed to be the general theme here, some cocoa returns joining a milder herbal note with spice exclusively present on the finish of the retrohale. The youth was shown off here, but as you get down to the Criollo, there is a noticeable increase in pepper and body before the JdN becomes a bit to harsh. Finish is still medium-full and a bit above average in length with leather and nuts joining the core flavor. Like I said, these are still a bit young, I smoked all mine just around four weeks and they could use a bit more time in the humidor, but they are good until about an inch and a half left. Construction remains to be quite good, the smoke doesn’t pick up in temperature and it’s still an incredibly consistent burn down to the final inch and a half.

For the Novice
Yes. These are one of the best Lanceros for the new smoker. Mild to medium in strength, medium-full in body (perhaps helped out by the smoothness) and awesome flavors for the strength levels. There is still a lot of Nica here, but it’s got the grace that the Cabinetta has always had. 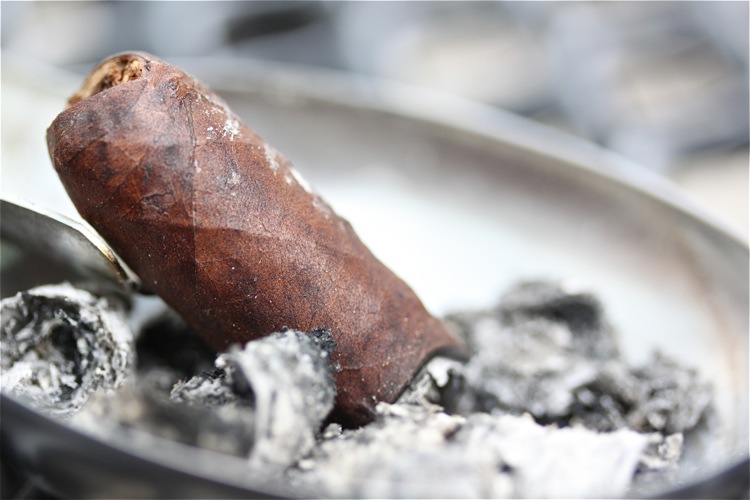 In the End
I had completely forgotten about the Cabinetta. I smoked them when they first came out and hadn’t really touched them since, which is a shame. The Cabinetta Lancero is definitely going to benefit from a bit of rest, and likely a bit of proper age as well, but these are good to go now. A great change of pace for those that love the heavy Nicaraguan profile, but more so a good cigar. I will go out on a limb here and say that at some points, the Cabinetta No.13 is more “Liga” than either of the Liga Privada Lanceros (EV-10 & L40) I’ve smoked. To me, both of them missed the core Liga flavor (cedar, spice and cocoa), which the Cabinetta has. Don’t get me wrong, the depth levels between this and a Liga Privada aren’t comparable, but at times there are some similarities going on here.

90. One of the secrets in the Lancero market and one that has already snuck itself into my smoking rotation.