For Jameson Cigars’ latest release, owner Brad Mayo dug into the history books a bit and came up with a name that hasn’t been seen for over 150 years.

La Resolución is a Cuban brand from the mid 1800s, a fairly obscure marca with relatively little turning up in a Google search of the name. What does exist is an old box label that Mayo turned up via the National Cigar Museum: 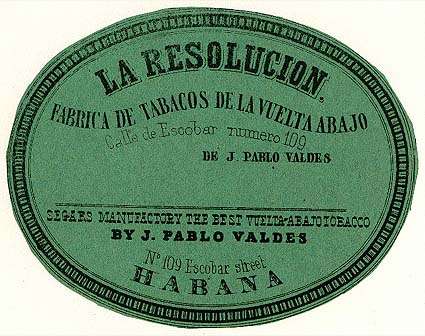 As can be expected with cigar names from this period, little is known about that cigar and its history, other than that it was the creation of a man named J. Pablo Valdes of No. 109 Escobar Street in Havana, and that the tobacco comes from the Vuelta Abajo region of Pinar del Rio, where the best tobacco from Cuba is grown to this day.

Jameson’s incarnation of the La Resolución name bears little resemblance to its namesake, at least on the band. It is a 5 x 50 Robusto, a single vitola release that will be part of Jameson’s regular offerings.

The Jameson La Resolución is a firm cigar, showing just the slightest give when squeezed. The wrapper is a slightly darker than medium brown with some dark spots and veins of various sizes. The pre-light is complex and unfamiliar – sweet and spicy off the top, but with a deep complexity that gets revealed after more inspection. There’s a spice that is somewhat unfamiliar but very enjoyable, like trying a culture’s cuisine for the first time. A saucy tang ties everything together with an almost Worchestershire sauce like flavor. The cold draw is easy and shows a thin wood note with just a faint bit of spice.

Right out of the gate the first third of the Jameson La Resolución presents the same bold flavor that was picked up on the pre-light aroma. While the beginning isn’t a spice bomb—it is a serious flavor bomb—loaded with tanginess, some wood and a decent, but not overwhelming amount of pepper – at least until the burn line approaches an inch or so. The ash is tight and about as light of a grey as you could get without becoming white. Just past an inch in, the flavors start to subdue a bit with the ramping pepper quickly dropping off and being replaced by a chalk note.

Even with the transition that takes the La Resolución into its second third, the cigar doesn’t lose the intensity of its flavor. What does change is the dryness of the flavor: what was rich and saucy is now dry and almost bristly, a fascinating change in smoke texture that keeps the palate and mind engaged.

The final third brings about a steady build of pepper both on the palate and in the nose, to the point of becoming cough-inducing and hard on the nostrils. The saucy note starts to come back as the oiliness of the leaves slows the burn down just a bit, extending the flavor building process and offering plenty of opportunity to take in all the complexity that the La Resolución has to offer.

The Bottom Line: Somewhere in between the incredibly full flavored first cigar and the medium-plus flavored second cigar is probably where the true flavor profile of the Jameson La Resolución lies, and while I’m not sure I got the exact flavor Brad Mayo was shooting for, it was a heck of a fun and tasty experience trying to hone in on it. While the varied intensity of the flavors cost the overall score a point or two, I wouldn’t turn either one down, and will likely be picking a few more up as this offered too many flavors and textures of what I like to not have in my humidor.