Jesus Fuego announced that he would be venturing into the ‘ultra-premium’ cigar market via a post on CigarBrief.com in March 2012, where he released the first details about the cigar. After occasional photos on Facebook and some samples that were stealthily given out during IPCPR provided a bit more detail, they have been released to one store and will soon be headed out to a select group of retailers in the very near future.

While the cigar was expected to be on display at IPCPR, it wasn’t, as the inventory had already been sold out prior to the trade show in August. 150 stores across the country will get this cigar, with each store limited to five boxes of each cigar. Fox Cigar Bar in Gilbert, AZ was the first to receive the cigar, as Fuego appeared at their FoxToberfest event in late October and brought a significant amount of the Edición de Familia.

Fuego said that the Edición de Familia will become a yearly release that will most likely use different wrapper and filler,and could utilize different vitolas from the three that are used for this new line’s debut:

Besides being the only non box-pressed size of the three, the Robusto is also unique in that it comes in a glass tube, while the others are packed without a tube or cellophane.

Fuego says the wrapper is the youngest leaf used in the cigar, having been aged for 10 years. To further add to the aging component of this new release, the cigars were rested for a year prior to being released, six months in your typical aging room bundles, and then another six months in their boxes. 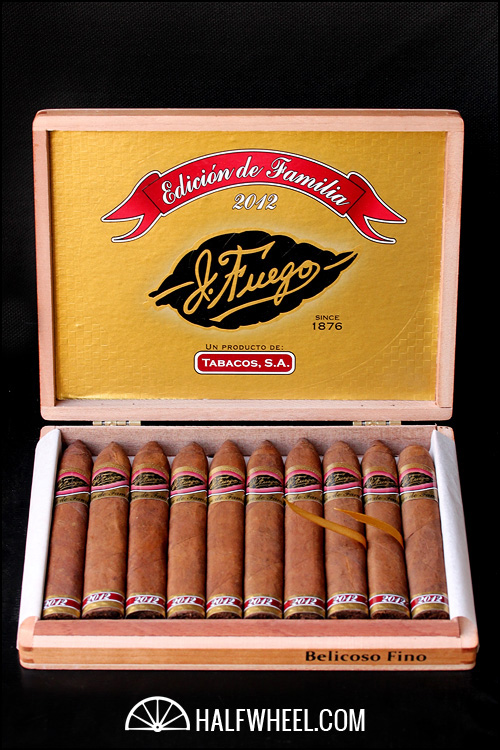 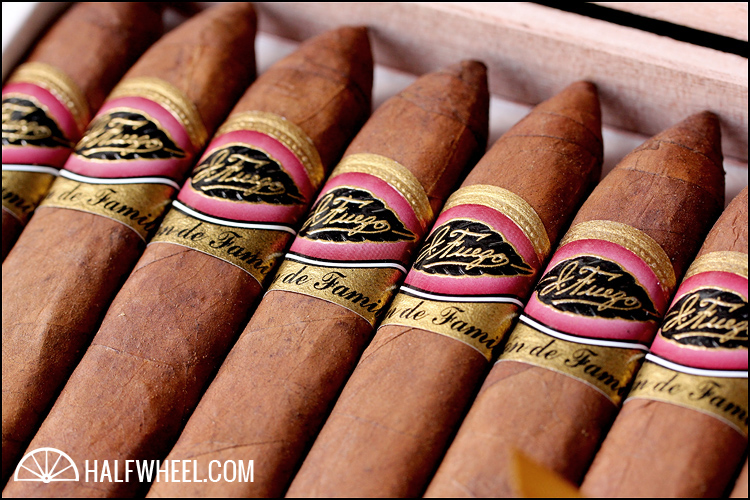 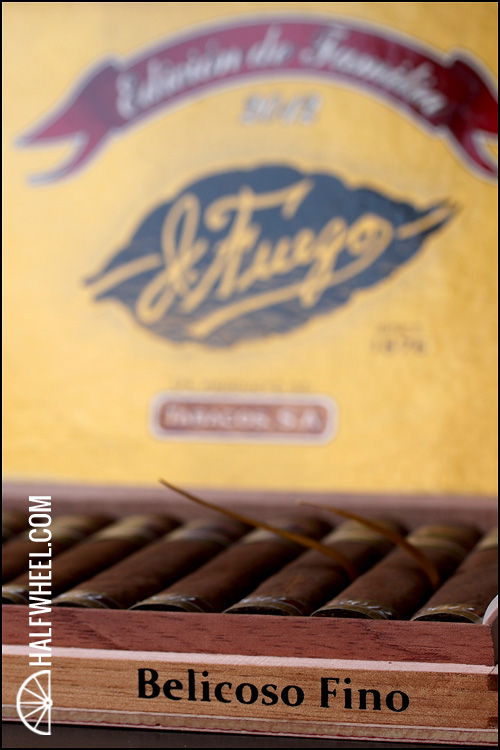 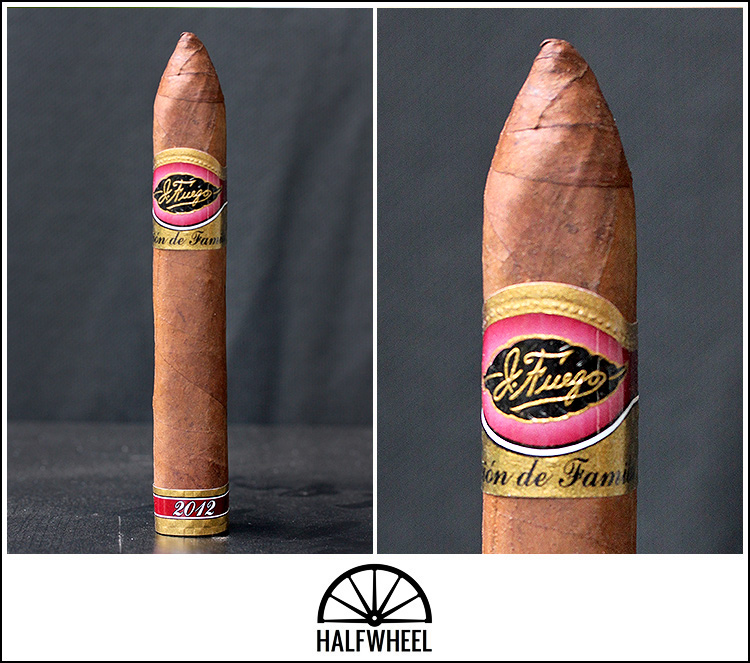 The J. Fuego Edición de Familia has a fairly short and stout Belicoso head with a decent amount of variance between the cigars when you see them laying next to each other in the box. The wrapper is cocoa powder brown, smooth with minimal veins, and the box-press giving some fairly sharp corners. While it feels fairly light in the hand, a few squeezes reveals that the cigar seems to be packed pretty well. The pre-light is fragrant with sweet wood, some cinnamon, notes of red apple – almost mulling spices found around holiday time. The cold draw is fine from an air movement perspective; there is more spice here than in the nose, with tea notes, bright flavors, and that red apple bite that was picked up in the nose.

The flame certainly doesn’t jump up to the foot of the Edición de Familia, and despite an even light, the burn line goes askew fairly quickly. The first third has an almost butterscotch sweetness tucked in there after the first inch or so. There are subtle shifts that evoke some notes of graham cracker, crème brûlée and butterscotch candies. Spice is minimal at best in the first two inches or so, though the amount varies from cigar to cigar, with the third stick showing a much more peppery side. What seems to become apparent in the first third is that the Edición de Familia is much more subtle than most of J. Fuego’s other cigars, with the age of the tobacco giving the leaves a mellower flavor that force you to pay attention to them instead of just smacking your palate with bold flavors. 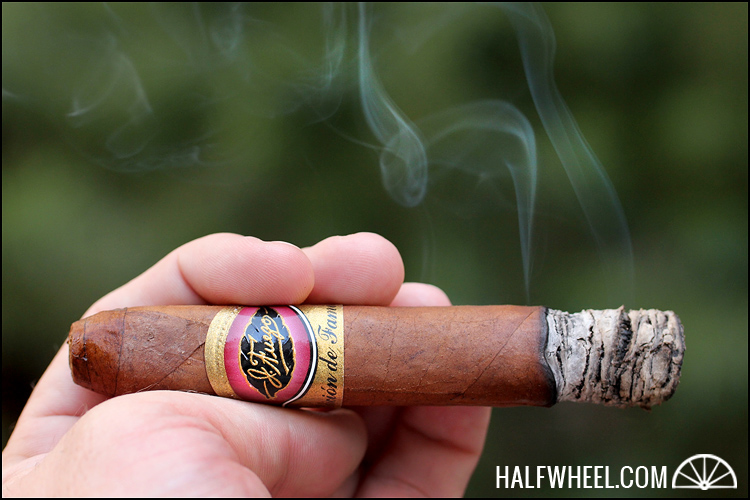 The second third brings a bit heartier flavor, with some medium-roast coffee notes entering the equation that start to bring on a more robust, almost earthier flavor. The changing build in flavor doesn’t last overly long or get too overpowering, as by the time the band needs to come off, the flavor has mellowed, with wheat bread leading the way. There are points in the second third where the Edición de Familia becomes dry, though not mouth-drying – the flavors just change texture a bit. 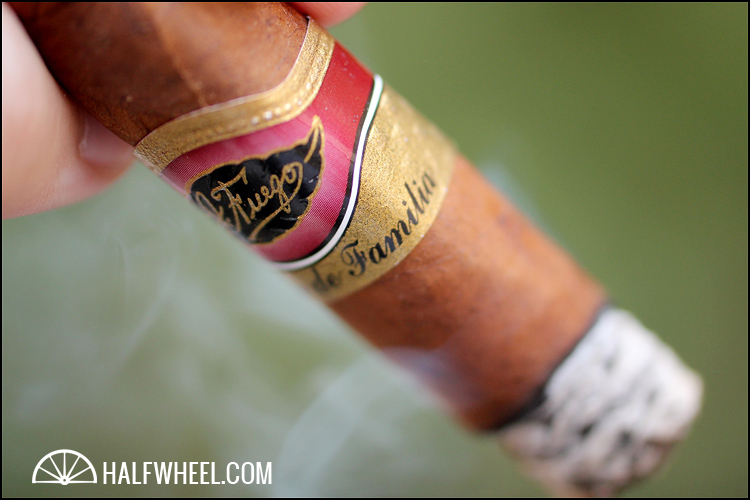 In the final third, the Edición de Familia picks up a thicker, powdery texture before the ambient smoke develops a more traditional burning tobacco aroma – for lack of a better word, the smoke becomes smokier. The cigar finishes smooth but picks up just a faint tinge of harshness, which seems to stand out even more because of how smooth and relatively mild it had been up to this point. 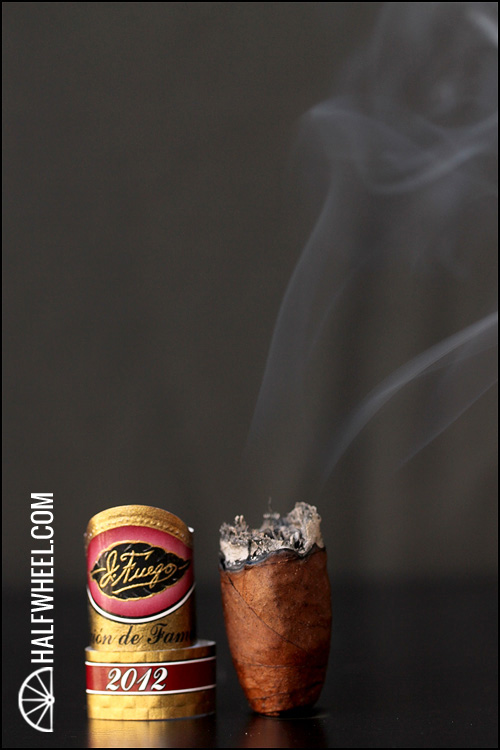 The Edición de Familia is certainly a bit of a departure from Jesus Fuego's other cigars, not just in terms of price and quantity produced, but also in terms of flavor. His core lines tend to be a bit more upfront with their flavor, while this cigar asks you to sit and enjoy it, focusing on the mellower flavors it delivers thanks to the aging of the leaves used to create it. It has some very familiar notes that make you feel right at ease, but also forces you to pay attention to its subtle changes and quieter notes. Given the aging already done to these, I'm not sure they will be cigars for the long haul, meaning I'll be plucking one from the box every couple of months to see how it continues to mature and develop.