Earlier this year, Skip Martin and Michael Rosales announced the creation of RoMa Craft Tobac, the new parent of Martin’s Hava Cigar Shop/Galveston Bay Tobacco and Rosales’ Adrian’s/Costa Rican Imports. The pair first teamed up in 2011 for the launch of the CroMagnon, which had a rather successful initial launch, earning sixth place honors on the Consensus Top 25.

Intemperance was one of two new projects that Martin and Rosales announced last year as part of their efforts to expand their new company, the other being Aquitaine, which is expected some time in August. It is not only the first new brand under the formality of RoMa Craft Tobac, but was also originally described as being the first brand that would debut in locations other than Martin’s online Hava Cigar Shop. Ultimately, CroMagnon has hit shelves of brick and mortar humidors in Texas before the release of Intemperance. While CroMagnon was very much a cigar that was made for Martin’s unique personal preference for stronger cigars, Intemperance has been characterized as a brand that could be enjoyed by a much wider customer base.

The description from Hava Cigar Shop explains it:

In the 18th century a global temperance movement began in rural Connecticut. After World War I, the movement began to spread like wildfire throughout the United States, and across the globe, as religious and women’s groups spread the gospel on the evils of alcohol.
In 1919, the temperance movement achieved their goal when the 18th Amendment to the Constitution of the United States established a national prohibition on the consumption of ‘intoxicating liquors’.

There are a total of four vitolas across the two wrappers, and while the names are different, they are in fact identical in size and price. 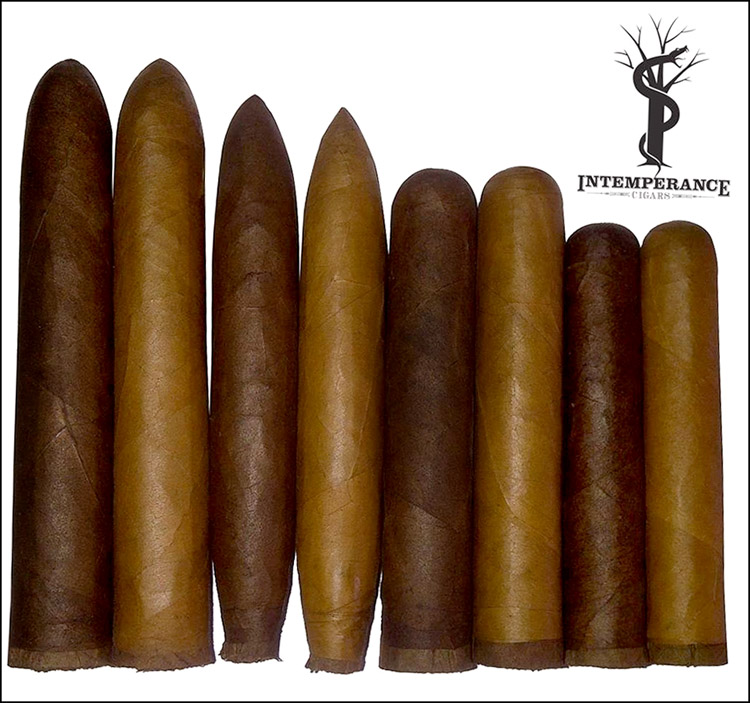 And here’s the two Petito vitolas (The Intrigue & The Charity). 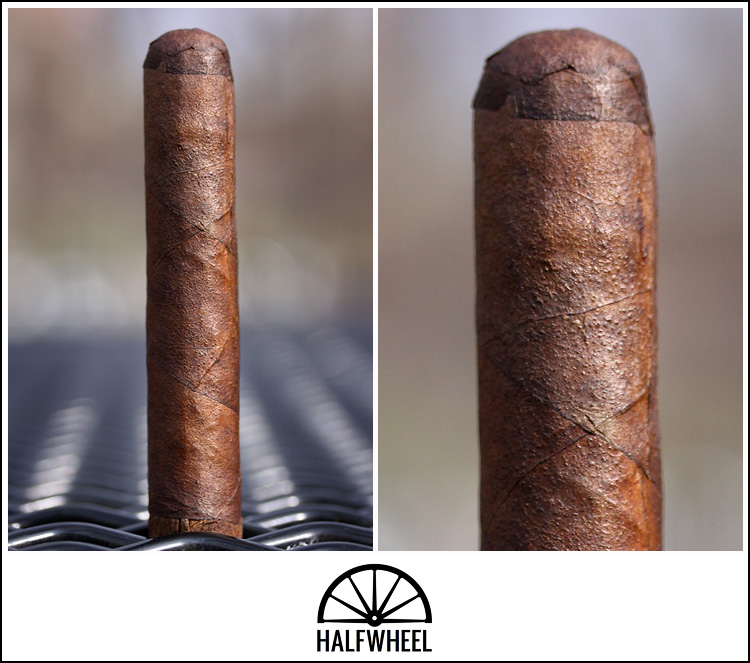 The first thing you notice is the foot, which is best described as unfinished. It’s a bit like some of the Pepín renditions of a shaggy foot, more so reminding of the My Father El Hijo than the Tatuaje The Wolfman, but it’s much less pronounced than either. In terms of darkness, it’s on the darker side of what normally comes out of Brazil, although it’s not as dense or oily as the big brother CroMagnon. Aroma off the Intemperance’s wrapper is sweet cocoa, earth, touch of cedar. It reminds me a bit of my time with CroMagnon, same sort of feel, just a bit lighter. The foot is actually noticeably lighter with more of a cedar and earth note prominent. Cold draw has a fruity undertone, although overall I struggle with the medium-full complexity. There’s some leather, barnyard, cedar and earth. Like I said, there’s definitely quite a bit of flavors, but they are way too compact to start picking winners.

It starts the first third by taking me back a bit. There’s a heavy nut and cedar note  that sees the former deepen before a blast of the latter starts the finish. Quite frankly, The Intrigue starts beautifully with uncontrolled, although not overpowering flavors, dancing around the front of the palate. It settles down and the core remains cedar over nuts with a bit of harsh earth and some cocoa coming through with the black pepper on the back of the throat. The draw is a bit tight, although nowhere close to where it was in the cold draw, but it requires more effort than average.

The second third sees a cigar that has the complexity that was antithetical to the early CroMagnon. The core shifts with the an interesting somewhat sweet cocoa over a now creamy nuttiness. Unlike the early parts of The Intrigue, there’s a discernible sweet citrus note on the retrohale. Flavor is close to full, strength is medium plus with a bit of an edge and body is definitely full. Quite frankly, it’s one of the more enjoyable arrangements in regards to the style. 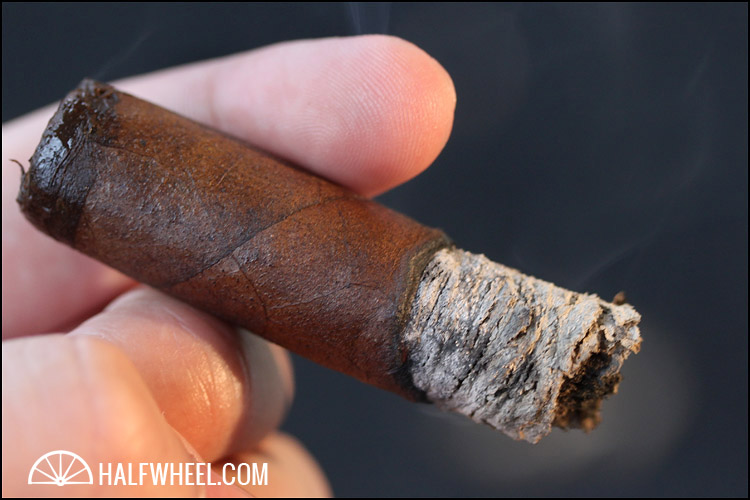 Into the final third and things begin to settle. The Petito begins to put off a bit more smoke than before allowing me to slow down and some of the flavors begin to shorten. Although I wouldn’t say the pepper disappeared in the middle portion, it makes itself more known in the final third alongside cedar, earth and then a flood of creaminess towards the end. Not much changes in regards to anything else, although I’d say construction-wise the final third is definitely the strongest showing for the Intemperance. 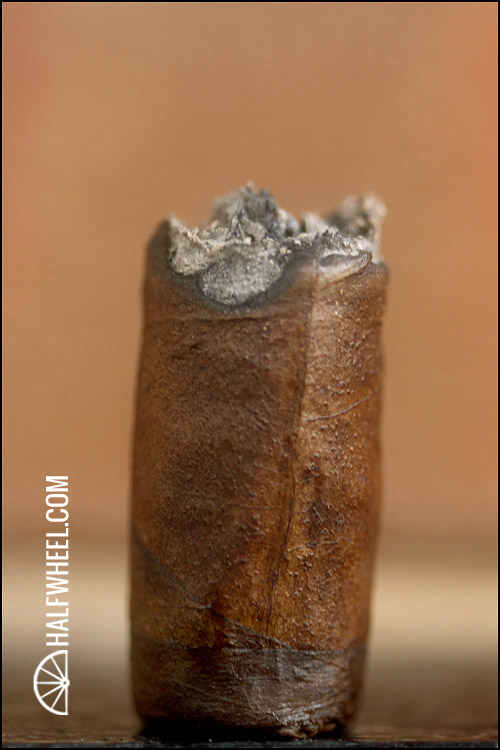 In music, it's all about the sophomore album. In the cigar industry, it's a bit different. There are so few new brands in general, and fewer that make it successfully through their initial effort. As such, we rarely get to judge a sophomore project, particularly when it's debuting. Mini-boom or not, we are going to be able to judge a few more efforts and it's hard to imagine given the current freshman debuts, a more anticipated follow-up. I was not a fan of CroMagnon. But as was noted, CroMagnon was a cigar that was blended for a profile that is near polar opposite to mine. It was made to be raw and powerful, and for that, it did a remarkable job. Intemperance is not that. This is a more traditional blend, and yet, it is quite different from most other things in anyone's humidor. Intemperance right now is a pleasure to smoke: complex, medium-full/full, made well and entertaining. The only question moving forward is are these going to lose something, and if so, how much, how quick. Because quite frankly, right now it's difficult to imagine this line not on the Consensus Top 10. In a world where boutique is thrown around enough that yours truly despises the term, this is what boutique is supposed to be. As a sophomore work, Intemperance shows what the commitment to small batch production, care and time can produce.