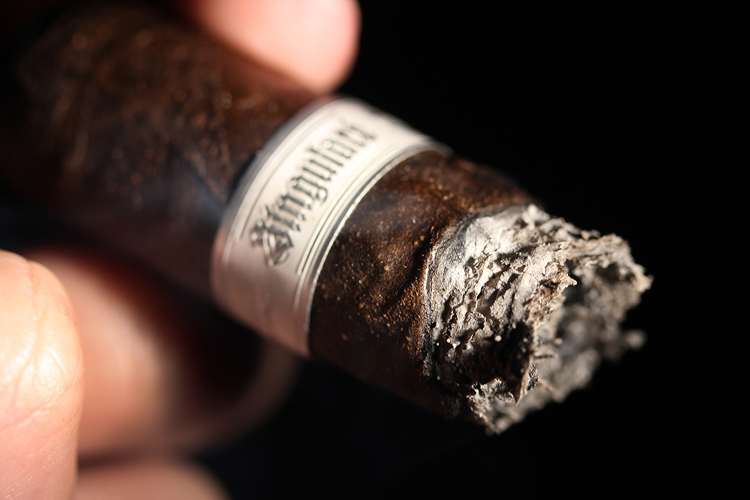 A week ago we reviewed the 2011 version of the Illusione Singularé, and today’s review is of its accompanying and subsequent release, the 2012 Vimana.

We’ve already covered most of the history, here’s what Brooks Whittington had to say:

In August of 2010, Illusione cigars released their first limited edition cigar, a 6 x 50 Toro dubbed the Singularé Phantom. Only 1,000 boxes of 15 were released, and Dion Giolito announced then that he was planning to release a new version every year, each with a new blend. Fast forward to early December 2011 and Giolito confirmed via Twitter he was postponing the 2011 version of the Singularé due to production delays with his regular production cigars. Not much was heard about the LEs until mid 2011, when it was announced that there would actually be two different versions of the Singularé released at the same time in the same box: the 2011 version would have a corojo wrapper while the 2012 version would have a San Andrés Maduro wrapper and be wrapped in tissue to differentiate them. It was also reported the Singularés would be made at Tabacos Valle de Jalapa S.A. (TABSA) as opposed to Raíces Cubanas, where the rest of Illusiones are produced.

The 2011 and 2012 editions of the Illusione Singularé are being made in Nicaragua, according to a report from Gregory Mottola of Cigar Aficionado. The move shifts production from the Fábrica de Tabacos Raíces Cubana S. de R.L.  factory in Honduras to Tabacos Valle de Jalapa S.A. (TABSA) in Nicaragua. That factory is owned by Eduardo Fernández, the principal in AGANORSA S.A.
Giolito has long cited a backorder of regular production cigars as the cause of the delay for the Singularés, a number that he placed at around 500,000 sticks in the article. The regular production Illusione lines will remain at Raíces Cubanas in Honduras. The two cigars will be packaged together in a 15-count box that is expected to start arriving at retail by the end of May with a price tag of $11 per cigar and $165 per box. While they will be released at the same time and in the same box, the 2011 and 2012 editions of the Singularé are notably different. 2011′s vintage has a Corojo wrapper while the 2012 vintage uses a Mexican San Andrés leaf for the wrapper. Binder and filler for the cigars comes from a Nicaraguan farm called Chilamate, though Giolito told CA that the blends are completely different.

And here’s what the freshly updated Illusione website says: The San Andrés wrapper is dark, although lighter than many Illusione Maduros, which at times have been close to purple. There’s a slight box-press and veins are light, but easily recognizable. While the Singularé 2012 comes in tissue paper, the aroma is noticeably less than the typical cellophane-wrapped cigar. There’s sweet leather and barnyard with much more grass, leather and sweetness from the foot. The cold draw presents cocoa, sweet earth and some noticeable pepper.

It begins the first third with tons of pepper over cedars and cocoa. As the flavor develops the pepper stays on top of the tongue and at the back of the throat while the cedar bitters and the cocoa goes completely away. After a few minutes, the Singularé is no longer dominated by pepper with a dark and earthy toastiness up front and a mixture of red and black pepper on the back of the throat. Easily noticeable is the plentiful thick smoke from the Illusione, which smells of dry cocoa and toastiness.

Into the second third and the Singularé 2012 sees the smoke production slow down a bit. The earth, which shifted between sour and bitter in the first third, is now firmly in the sour camp with cocoa, earth and grassiness breaking free. In addition, the toastiness is much more pronounced, including the retrohale where it dominates the brief traces of citrus. Construction remains much the same with the draw still slightly open and the ash holding to an inch and a half.

For the first time in at least a while, I get a bourbon flavor with an inch and a quarter mark of the final third. I hadn’t had any bourbon in a few weeks, but it was an interesting addition to the final third. This happened in two of the three cigars I smoked, which was a nice surprise. Elsewhere, the toastiness continues to increase as the sourness dies in place of some acidity. Ultimately, it’s a struggle to keep it lit around the inch mark and I call it a day.

I liked the 2012 more than 2011, but much like Brooks—this wasn't close to the 2010. Illusione might be the best total profile in the industry with only the Maduro line standing out as something not in my wheelhouse. The Singularés were just not up to the quality that you expect from Illusione, which features perhaps the most underrated and overlooked core line in the business, and it was a big miss from the original Phantom. While the 2011 and 2012 Vimanas will likely get better, I imagine it will be after they sellout, which raises the question over whether you should buy some with hopes to get better. For me, I'd rather put that money in pretty much any box of the Original Document line, particularly if it involves a box with a 2009 stamped on it—because those are smoking unbelievable right now.