It’s Dion’s Lancero. That’s about all I got for the intro. It’s one of the most highly touted cigar lines that a lot of people have yet to smoke, and I’m a bit puzzled why. Still, of the three wrappers Dion offers the ~hl~ in, I have to imagine this is the most overlooked. The Candela is green and cool; the Maduro is about as dark as a Tootsie Roll and then there is this. Today’s Smoke
I was actually a bit confused, I sort of thought that the ~hl~ was part of the core line that Dion Giolito introduced after formally starting Illusione, but it was not. It came in 2008, a few years after Dion had successfully started his brand. As always, someone can tell the story far better than myself, here’s Dion’s thoughts on his Lancero:

~hl~ – The Holy Lance My Lancero, the lance. Get it? Constantine was the first Christian Emperor to lead Rome. It was fabled that he had possession of the very spear that punctured the side of Jesus while on the cross. He was said to carry this relic into battle and, it was said that it helped him win his many battles. It is an artisan blend and, the mildest of all my cigars.

Like the Montecristo 75th Aniversario Lancero that was reviewed yesterday, this is 7 1/2 x 40, i.e. traditional length with a tad bit extra ring gauge. The Nicaraguan Cafe Colorado wrapper has a solid earth with a tan hue and a sheen. I cannot stress just how good the Illusione ~hl~ looks. From the pigtail to the foot, construction really shines. Tiny cracks run up and down the wrapper, but it really doesn’t take away from the sheen one bit, probably just adding to it. From the Nicaraguan wrapper I get a coffee and earth aroma with a faint smell of aged leather coming into the medium aroma. It’s a bit loose to the touch with average packing, but with Lanceros that seems to be a good thing. Aroma from the foot is medium plus with herbs and vanilla joined by a noticeable acidity from the wrapper. Lighting
As you’ll notice, particularly with Lanceros I’m a bit more adventurous in terms of cutting, i.e. less V-Cutters. This time is the traditional Montecristo Signature Cutter and the dual-guillotine does its job. Aroma is coffee, vanilla and nutmeg, still in that medium range. Cold draw is open with the Raices Cubanas creation producing notes of citrus, perfume, spices and a touch of meat on the finish. The air gains a perfume and earth note as I light the Holy Lance, utterly elegant. First draw is still slightly open starting with a warm chocolate that transitions into a dried woodsy note. The medium finish is cinnamon, meat, oak and herbs, extremely complex despite a below average length. First Third
Toasty, sweet woods, cinnamon and rich earth. From the beginning it is very clear this is a complex cigar with the signature Dion Giolito balance that you come to expect. Finish is a harsh pepper, oak, woodsy and dark tobacco flavor; full, but once again a bit below average in length. The ~hl~ remains slightly open, with only average smoke production out of the foot. That’s fine, because it seems the smoke has concentrated to the top and it pours out with incredible thickness. The still Winston air is filled with oak and tobacco, a perfect addition to everything else that is going on. 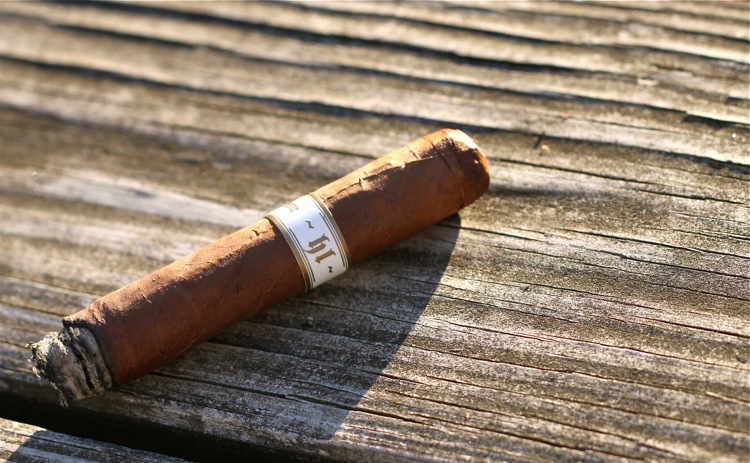 Second Third
Extremely active is the way to describe the entire cigar, perhaps epitomizing in the second third. There’s lots of toastiness, sweet cedar and a mocha flavor that reminds me a lot of the Tatiana Mocha I smoked thanks to a bet gone bad. Your first reaction would be that seems like an awful idea, but it actually isn’t. Unlike the Tatiana flavor, it’s smoother, more concentrated and is missing the stench of the flavored cigar. Add that the sweet note is contrasted by the heavy toastiness and cedar and everything turns out fine. Finish lengthens while remaining full, this time exhibiting cedar, herbs and a harsh black pepper. Draw is slightly open, with minimal amounts of tar building up, but enough that I’m forced to deal with it. This happened in two of the three natural versions of the ~hl~, both open draws, both relatively minor. Smoke production continues to increase and at this point the thick ghost-like smoke has turned into nothing short of an art exhibit in the North Carolina air. Final Third
The Illusione brings sweet caramel, woods, tobacco and a bit of raisin, still full. Finish is the same sharp pepper, oaks and a touch of cocoa; full and lengthy. Construction doesn’t change at all in the final third. Burn is good, the dark ash continues to struggle to hold on and the draw doesn’t budge. One of the beauties of every Illusione Lancero is the ability to burn your fingers. There’s a consistency in just how far you can burn down the Nicaraguan Lanceros, it’s honestly astonishing, example above, below, everywhere.

For the Novice
It’s medium-full from start to finish. For that, the Illusione ~hl~ in Natural doesn’t get the seal of approval. This is a cigar for the mature smoker. I truly believe in order to fully enjoy this cigar, you’ll need a quiet place and a good state of mind, because the flavors are constantly changing and easily will change acts if you don’t keep up. In the End
I smoked my first ~hl~ Natural with water, my second with my normal Coke and this one with a sweet root beer. I’m not one that spends a lot of time or effort on pairings, but this definitely was a winner. The sweetness of the root beer brought out a few more earthy flavors. With the Natural wrapper, the Holy Lance is one of the best kept secrets that everyone already knows about, I think. Construction is great, flavor is complex and it’s put together with the signature that is Illusione, balance.

93. It’s a cigar that makes you smile and wanting little more. One of Dion’s best, which is saying something.