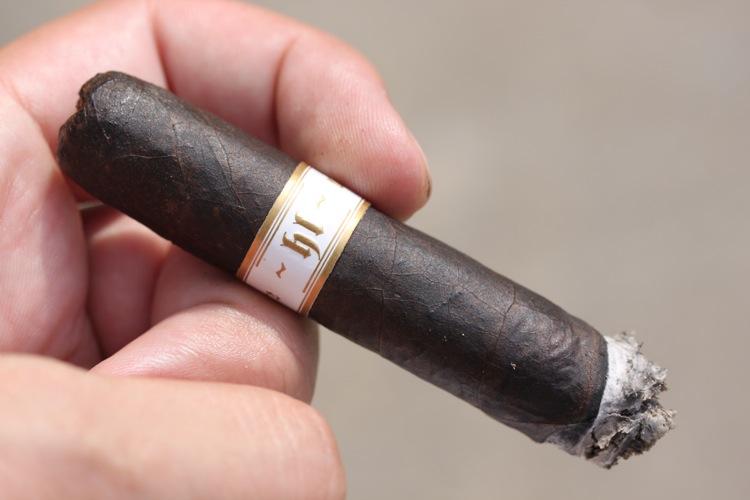 Inevitable? Yes. I’ve already reviewed the Illusione ~hl~ in Candela and Natural, so the ~hl~ Maduro was only a matter of time before I completed the selection of Dion Giolito’s Lanceros. While I said that the I believed the ~hl~ in Natural might have been the most overlooked, a bit of research trying to figure out what wrapper this cigar used leads me to believe, this is likely the most overlooked. (Don’t worry, I still think the wrapper is about as dark as Tootsie Roll packaging…) 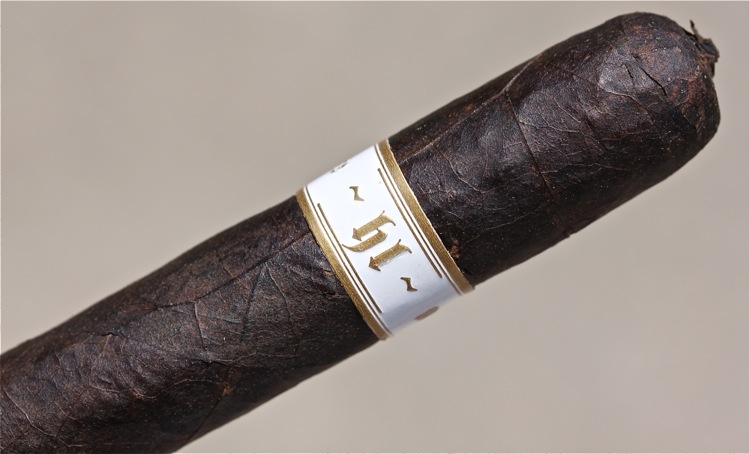 The Story
A bit of an editorial to start this review? Why not. Dion’s (good) reputation precedes him. Dion use San Andreas wrapper for his ~hl~ Maduro and while Mexican wrapper has gained a bit more use of late, it still is an unknown to most. The first thing you think of when you see the cigar, “damn that is dark.” And it is… If this wasn’t Dion and his reputation for respecting tobacco, the phrase “dye” would be thrown around. No questions. But this is Dion and as such you just have to remember that not all San Andreas tobacco looks like the Tatuaje’s “The Face.” In fact, according to Tobacconist University the more popular of the tobaccos out of Mexico are not San Andreas Marrón, most are San Andreas Negro:

Like Connecticut Broadleaf, San Andreas Negro is Stalk-Cut and lends itself to binder and maduro wrapper production. This varietal is a tough leaf that can withstand the extra fermentation required to produce a maduro.

The story of the ~hl~ (Maduro) is like the Candela, in Dion’s words:

The New lanceros were) Rolled at Raíces Cubanas. I had a bunch of extra ~hl~ boxes, so rather than eat the cost that it took to make them, I’m gonna put some maduro’s and candelas in them. They’ll be available to any authorized retailer ’till they’re gone.

~hl~ – The Holy Lance My Lancero, the lance. Get it? Constantine was the first Christian Emperor to lead Rome. It was fabled that he had possession of the very spear that punctured the side of Jesus while on the cross. He was said to carry this relic into battle and, it was said that it helped him win his many battles. It is an artisan blend and, the mildest of all my cigars

I’ve mentioned this once before, but I really think that cellophane (or perhaps tin foil) would be a step in the right direction. No doubt, there are downsides: it’s ugly, aging (actual aging, not resting), costs, propensity to box-press feet, etc. However, like the Candela, this wrapper is brittle. It’s not as delicate as the green leaf. Speaking of color, the Illusione ~hl~ in Maduro features a great looking Oscuro wrapper that exhibits some purple over minor veins. The San Andreas wrapper is medium in aroma with barnyard, nuts and spices. Raíces Cubanas rolls some of the best cigars, this is no different producing a feel a bit soft to the touch. Off the foot notes of chili pepper and sweet leather and earth on the medium-full profile. 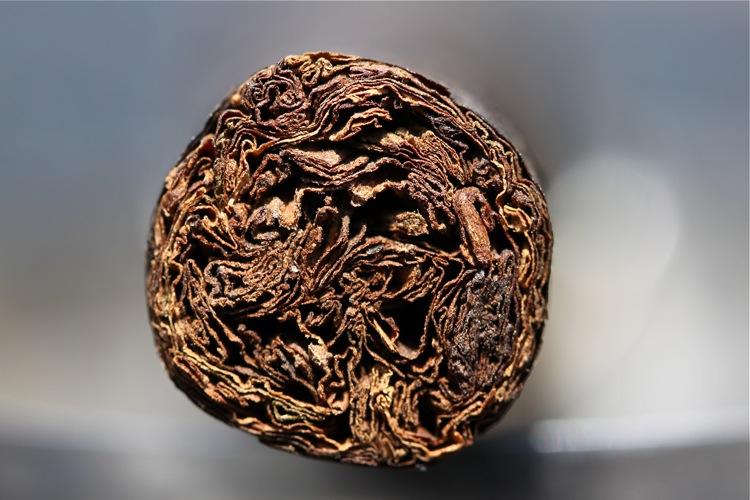 Lighting
It’s a clean cut with lots of pepper and earth in a full aroma off the head. Cold draw is a bit tight, but comfortably within my sweet spot. Flavors are an interesting medium-plus contrast of plum, paprika, cedar and some tobaccos. Lighting is a complex toasty mix of cedar, pepper and a bit of wood; medium-plus. The first draw of the Illusione starts with a dry cedar transition into cocoa and earth with a finish of earth and pepper transforming into a sweet cedar and toasty note; medium-full and lengthy. 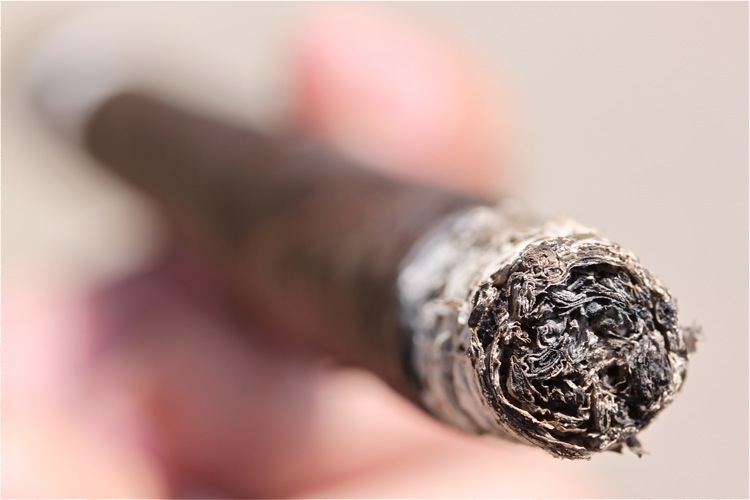 First Third
Pepper, aged tobacco and sweet nuts. Clean, full and straight to the point. Finish is tobacco, caramel, nuts and oak; full and lengthy. Across all three of Dion Giolito’s Lanceros, construction, particularly draw and smoke production, is something to admire. The Maduro is no different bringing good amounts of toasty smoke at each draw with just a slight pull of resistance. Dark doesn’t mean strong when it comes to Nicotine, this is a prime example as I would say the ~hl~ Maduro is at Medium in the middle portions. 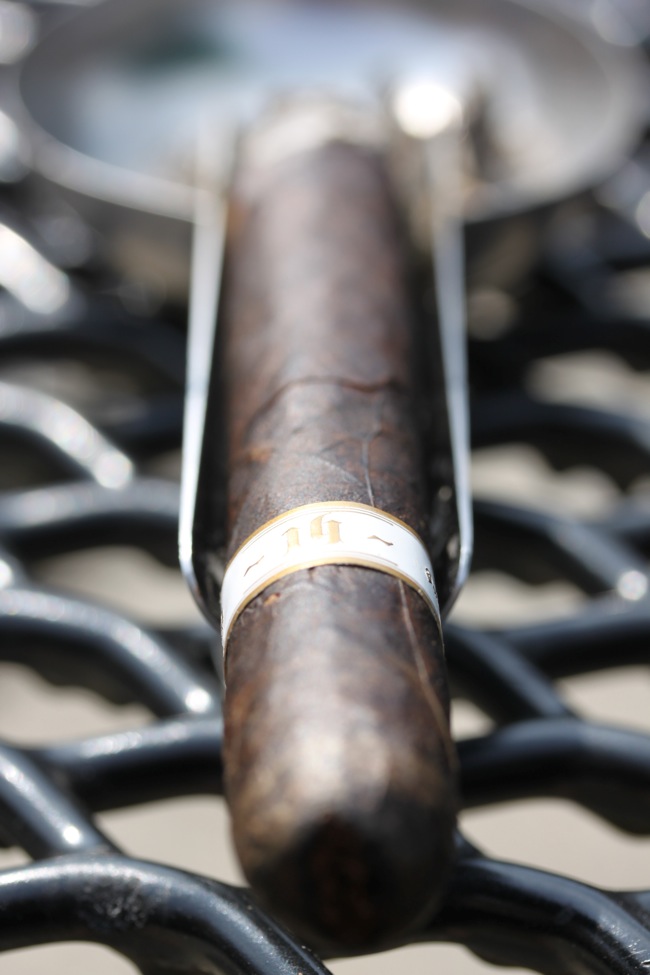 Second Third
The middle portion of the Holy Lance shows off more aged tobacco with toasty, floral and sweet leather notes joining the mix. FInish is once again full with tobacco, cocoa, citrus and a harsh pepper, an interesting mixture yet again. Body is medium-full, strength now just over medium; but construction is where the Illusione is shining. While I might have my issues with the wrapper and cellophane, there is no denying that these are rolled very well, as evidenced by the smoke production and draw. Outside, the humid Carolina air is filled with bundles of toastiness, while smoke production to the mouth remains quite good as well. 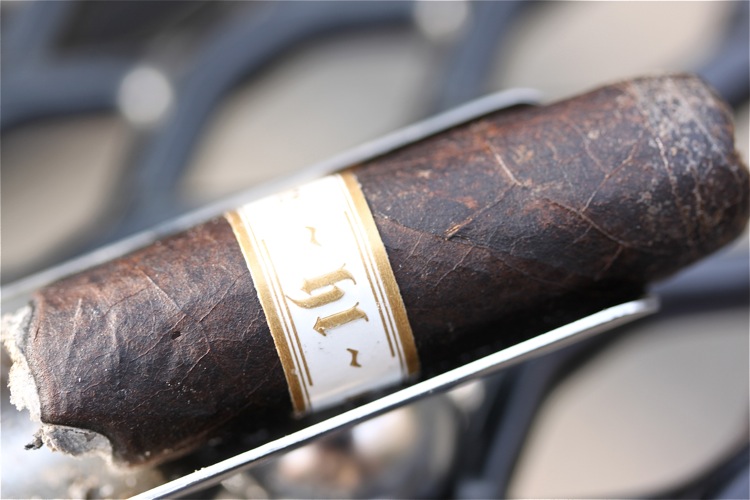 Final Third
It darkens a bit, mainly due to a dark herb that dominates for a bit until a sweet grass and earth note makes it in. Like in prior times, the Illusione is still full flavored. Oaks, herbs and dark tobacco make up the finish, which is still full and lengthy. Somehow, this cigar manages to increase in smoke production with about two inches left. Eventually, with about an inch left, I set things down.

For the Novice
It’s not as bad as one might think when looking at, but this still is not for a novice. It’s a bit too much all the way around. 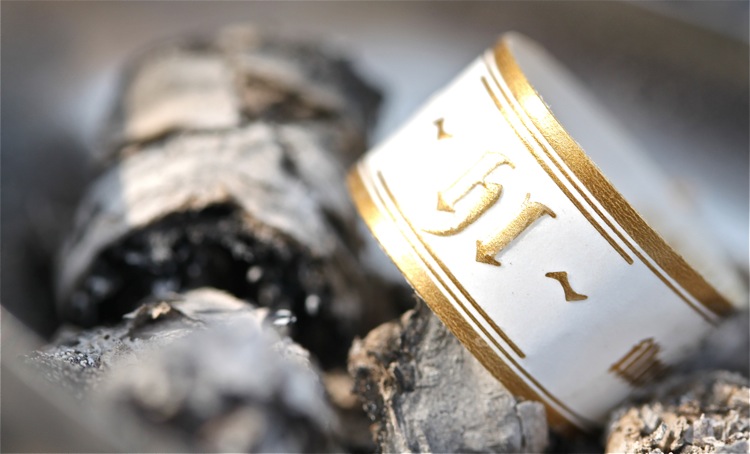 In the End
I’m still biased towards the ~hl~ in Natural form. I think the ~hl~ Maduro is one of the best cigars using Mexican tobacco, particularly in the manner Dion went about it, but for me, it’s just not as complete as the Nicaraguan puro. I’m not really sure who I’d recommend the Holy Lance Maduro to, but it has to be an experienced cigar, as this is a challenging smoke in terms of the palate. I also cannot stress the importance of taking your time, this cigar gets better the slower you go. Simply put, the Holy Lance Maduro is one-third of one of the most complete Lancero offerings on the market, bravo.

87. A good cigar that takes a good palate to enjoy.