First released in 2008, the Illusione Cruzado shares components with the regular Illusione line, but it uses more criollo tobacco compared to the Original Documents’ use of Corojo.

The Illusione website has this to say about the Cruzado blend:

A blend dominant with Criollo ’98 tobaccos complimented with one component of Corojo 2006. The blend exhibits a rich aroma in the air. The flavor profile is palate-forward with hints of leather, coffee and winter spices. All vitolas come packaged in cedar dress boxes of 20 cigars and are non-cellophaned to promote box aging.

We heard that there was a few new releases coming down the pipeline for the IPCPR show, including a new vitola for the Cruzado line, and we published the details in a news post on July 11:

The Cruzado Marelas is the seventh vitola for the Criollo ’98 blend and will be once again wrapped in gold. Giolito told halfwheel the cigar measures 6 1/2 x 52 with a bullet cap and gold foil running from the top of the cigar to the middle point, which is where the band sits. Pricing is $9.50 per cigar.

For those wondering, Illusione already had a vitola called the Marelas in the Cruzado lineup, a 5 5/8 x 46 Perfecto that was discontinued in 2011. “I replaced it with this size because it was just as much cost-wise to make the original Marelas as it is to make the 109 cap,” said Dion Giolito of Illusione. “End result is the consumer gets more cigar for the same amount of money.” The Illusione Cruzado Marelas Supremas is gorgeous to look at with gold covering that covers about three-quarters of the cigar from the cap down. Speaking of the cap, it is instantly recognizable as similar to the classic Cuban 109, although it does not seem to be as round as the traditional. The wrapper is a dark mocha brown color, oily and silky smooth to the touch, and almost totally devoid of veins. There is a great resistance when squeezed, and the aroma emanating from the wrapper is a combination of sweet leather, cedar, earth and pepper.

The first third of the Illusione Cruzado Marelas Supremas starts out instantly with strong flavors of oak, leather, gritty earth, espresso and dark chocolate. There is a great amount of black pepper on the retrohale as well as a small amount of spice on the tongue that does not seem strong enough to stick around long. Noticeably underneath the other flavors in the profile is a wonderful caramel sweetness that combines excellently with the aforementioned pepper and earth notes. Smoke production is way above average, and the strength starts and ends the first third beneath the medium mark. Construction-wise, both the burn and draw are excellent, never giving me a problem. 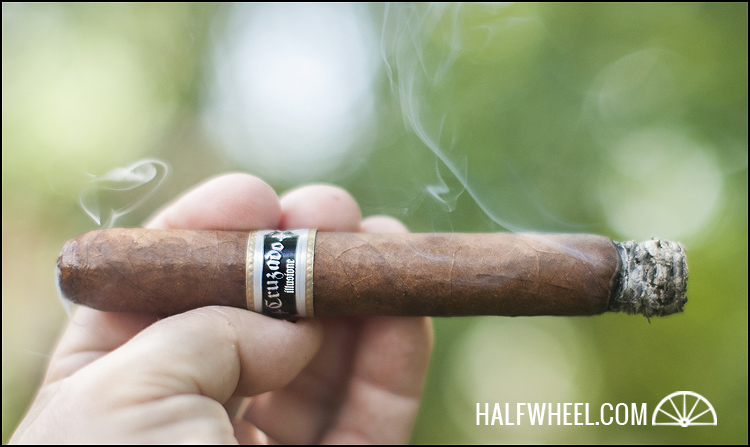 Coming into the second third of the Illusione Cruzado Marelas Supremas, the profile is a bit less sweet, but adding notes of dry tea leaves and peanuts to go along with the other flavors of earth, chocolate, coffee and leather. The black pepper on the retrohale has been reduced to about half the strength that it was in the first third, but the note is still quite noticeable and still strong enough to have an impact on the profile. Smoke production remains high, the burn and draw remain ideal, while the overall strength easily hits the medium mark by the end of the second third. 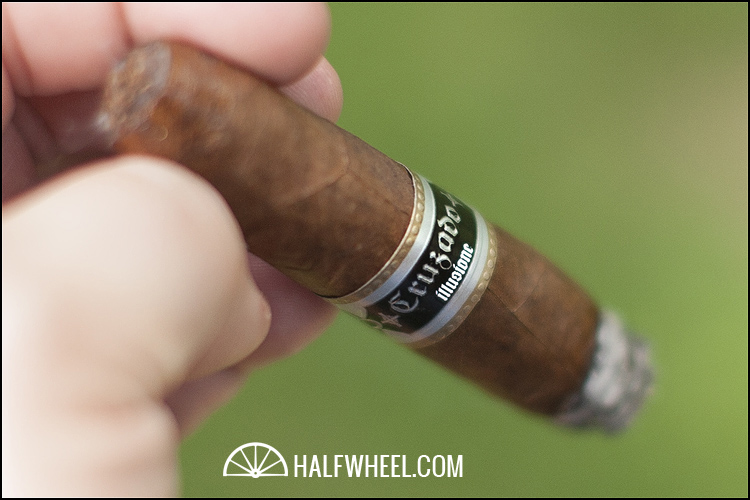 The final third of the new Illusione Cruzado vitola shifts yet again with more of a creamy leather and espresso notes becoming dominant. Other notes of earth, oak, tea leaves and nuts continue to flow in and out of the profile, and the black pepper continues to recede to the point that it is barely noticeable at the very end of the cigar. The construction ends as it began—excellent—and the amount of smoke coming from the cigar never seems to let up. The overall strength continues to build compared to the second third ending the cigar firmly between the medium and full range. Everything about this release clicked with me: the overall presentation, the 109 cap, the construction and the complexity of profile. I have always loved the Illusione brand for what it stands for and what Giolito seems to get out of his cigars: distinct and clean flavors, excellent construction and a wonderful balance, and the Cruzado Marelas Supremas is no different.  I could not hide my disappointment in last year's Singularé release, but with the Rothchildes and the Cruzado Marelas Supremas, Illusione is back on track.