For well over a year now, there have been photos of the Herrera Esteli Norteño floating around online, as well as the cigars themselves at events featuring Willy Herrera, master blender of Drew Estate.

Even before the original Herrera Esteli was released, Herrera was already working on a maduro release with a Mexican San Andrés wrapper. Fans of the original seemed to be clamoring for it with as much fervor as he seemed to have working on it and giving sneak peaks into the creation of this second line. In March the line had been confirmed, and in April the final sizes had been announced. Yet in many ways it isn’t fair to call this a Herrera Esteli maduro; rather this is becoming its own line with its own distinctive bands, boxes, and name.

The name Norteño comes from a term used to refer to people in the northern part of Nicaragua, which is where Estelí is located. The band shares a look with the original Herrera Esteli, but the color scheme is noticeably different and the central part of the band features the national bird of Nicaragua, the Guardabarranco. The Herrera Esteli Norteño Robusto Grande is cloaked in a toothy and somewhat dry wrapper that has a matte finish and small veins that seem to have flattened out a bit as well from the soft press. The press is fairly significant when you think about it but appears to be executed flawlessly with just the slightest amount of give, beautiful corners and no bumps or other visual imperfections. The pre-light aroma is a duality of notes; on one hand you have a dry and up front note that has bits of earth, dry wheat, and a touch of wood. On the other you have a white grape jelly sweetness that is fragrant and almost floral, a clean and fresh smell that is so different yet also very complementary to the other aromas. On top of both is a decent amount of pepper that plays well for the most part though isn’t afraid to come to the forefront. The cold draw is easy but not loose and leans more toward notes of wheat and grain without the sweetness or overt amounts of pepper.

It’s an earthy and peppery start to the Herrera Esteli Norteño, as the San Andrés leaf gets itself to the forefront of the flavor in the first few puffs, offering a dry flavor of clay-laced soil that sets the stage for a series of peppery puffs with a unique flavor; more white pepper than black but certainly flavorful. That backs off in measured steps more as a reprieve than to offer the opportunity for any other flavors to come along, though there are some touches of sweetness that start to get sprinkled in, as well as some of the spiciness that was promised from the Honduran binder. Retrohales in the first third are almost a requirement as they are peppery but not overpowering and help show off some the nuances of the aroma and flavor. The ash is tight and a consistent shade of dark gray, holding on for about an inch before slowly curving and dropping off into the ashtray. 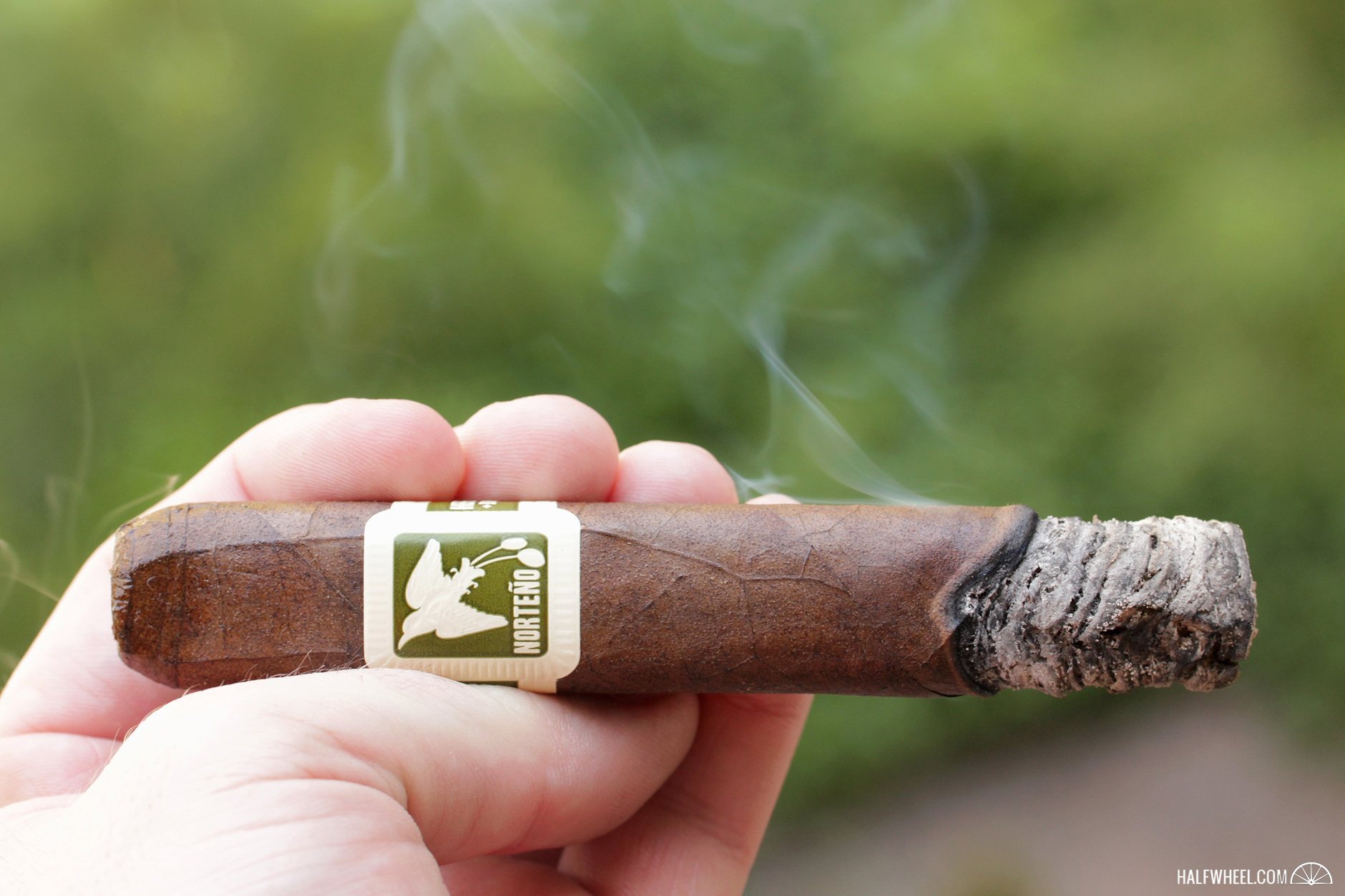 The flavor stays fairly consistent as the burn line heads into the second third of the Herrera Esteli Norteño, with a good amount of San Andrés terroir setting the tone and touches of pepper adding some vibrance to the profile. At the midpoint, there’s the first appearance of sweetness in the cigar, a thick and dark berry note that is a more intense version of what was picked up on the pre-light aroma. The pepper starts to shift gears as well, becoming a bit more potent towards all the senses, particularly the eyes, and retrohales are just a bit more challenging but remain a must-do. After a bit of back and forth for command of the flavor profile, the two seem to agree to share the spotlight and the result is the most complex and enjoyable note so far. There still hasn’t been a single problem with the burn line or any other technical aspect, as the smoke production remains plentiful and the ash holds on well without any flaking. 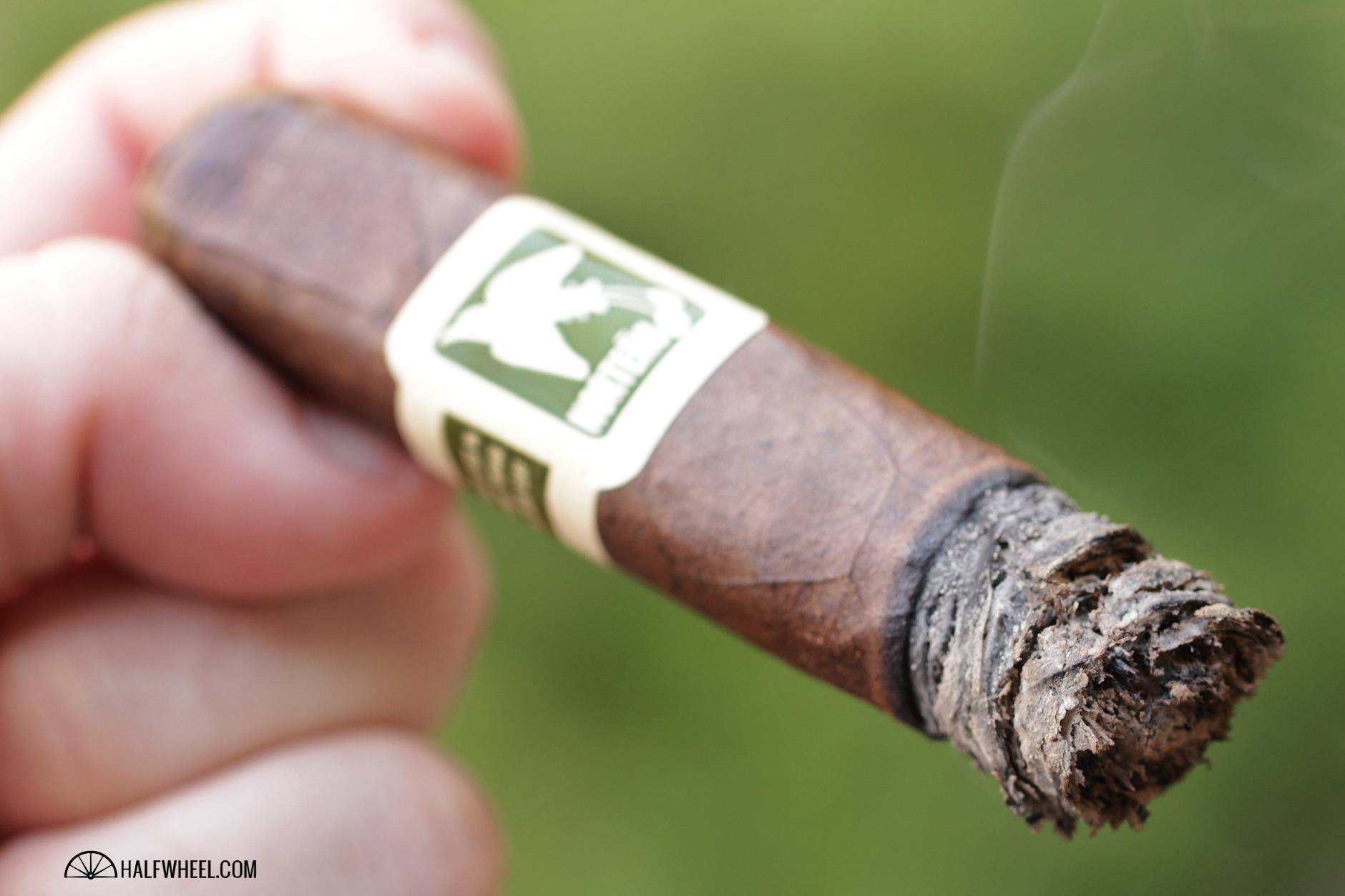 There is an absolute ton of earth and pepper that come out at the start of the final third and overtake the sweetness, but it’s not long before things balance out and the Herrera Esteli Norteño returns to doing what it does best: offering an incredible dance of sweetness, pepper and earth that carry the cigar until its eventual conclusion. The burn line remains sharp and even, not a single relight or touch up has been needed, and the draw has never wavered to become either too loose or too tight. As I mentioned in the introduction to this review, it seems a bit unfair to call the Herrera Estelí Norteño simply a maduro version of the Herrera Estelí, though at a surface level that's what it is and that is what most people will end up thinking of it as. After smoking a number of both the original and this new release, it's clear that these really are two distinct cigars that deliver two distinct flavor profiles, and as such might not be liked by fans of the original or be very well embraced by those who thought the original was lacking certain components. After strong notes from the San Andrés wrapper out of the gate, the spiciness of the Honduran wrapper starts to emerge before some wonderful sweetness appears near the midpoint, and all of the components come together in the second half for a complex, balanced and enjoyable finish. While I still think the original Herrera Estelí is just a touch better, if you were looking for more strength and pepper, as well as if you are a fan of Mexican tobacco, the Herrera Estelí Norteño offers a lot to like and is most certainly worth checking out. I can only wait with eager anticipation to try the other sizes to see just which one I like best and will make a part of my humidor.