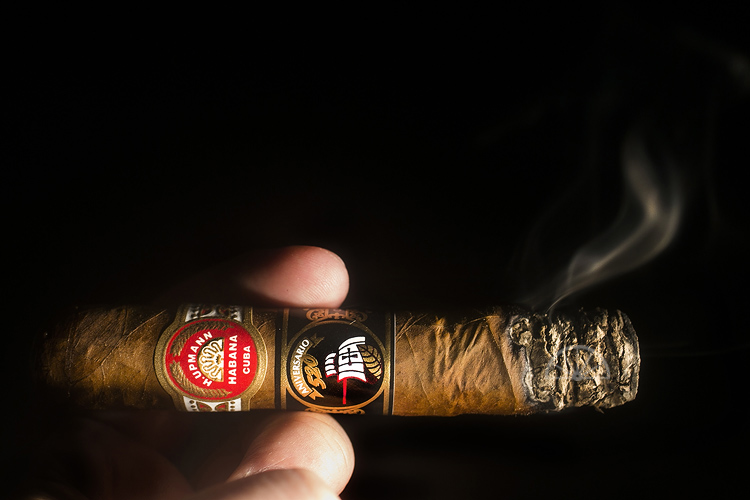 To celebrate the 520th anniversary of Christopher Columbus’s discovery of the new world and as such new world tobacco, Habanos S.A. released a few special cigars with 520 designation. One was the Edición Limitada 2012 from Montecristo, called the 520, the other was the H. Upmann Robusto, a cigar that was also a 2012 EL, with a special commemorative band released at the XIV Festival del Habano.

The press release began the hype:

February 28, 2012 (Havana, Cuba) — In the year that marks the 520th anniversary of the discovery of Habano by Europeans, Habanos S.A. has come up with a special case to celebrate this party.
The 520th Anniversary case is a special gift whereby Habanos, S.A. and the XIV Habanos Festival commemorate the 520th anniversary of tobacco’s arrival in the Old World.
This is a limited and unique production designed for those who attend the Festival since it’ll only be on sale during the weeklong celebration until end of stocks. There’ll be limited quantities of only 1,000 of those cases.
The case contains ten H. Upmann Robustos, a Habano vitola that’s currently out of stock in the brand’s portfolio. 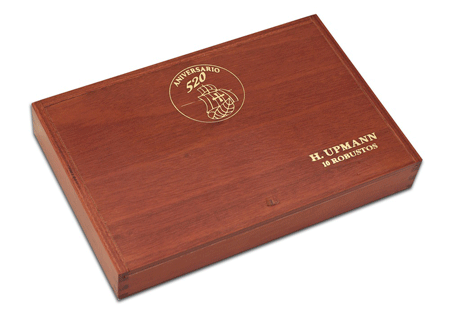 The occasion deserved a very special gift since this marks the date that strengthened the encounter of two cultures –the European and the American- with a product that has since then bound together the two parts of the planet: the Habano.
Used by aboriginals in their religious rituals, the discovery of Habano by the Europeans raised the product to the deluxe standard it boasts today, with a culture of its own that goes far beyond the mere act of puffing on it.

And by the time the Festival ended, much of the Cuban cigar world was talking about how good this cigar was. It is believed to be different than the H. Upmann Robustos Edición Limitada in that it is actually based off the 2011 Royal Robusto, a cigar that was received well. It’s a demonstrative-looking cigar, but not the prettiest. The roll is actually quite rough in the hand, although the wrapper is smooth. This is a cigar that is noticeably lighter than both the Royal Robusto and many Upmann ELs. While there is almost nothing from the wrapper, the foot provides a typical Cuban sweetness, spices and touches of pepper. The cold draw is slightly open, but there’s a decent bit of resistance with a bittersweet leather, peppermint and a generally more herbal flavor than I find in most Upmann’s I’ve smoked.

From the beginning of the first third, it’s apparent that the 520 is going to put out tons of smoke. It also starts out much spicier and stronger than I could have ever imagined with some unfinished woodsiness and burnt toast rounding out the first few puffs. While the pepper remains, there’s quite a bit of sweetness, an enjoyable cedar and that classic twang. While I have no qualms with the smoke production and burn, the draw is completely open and I have zero control, something that I don’t particularly appreciate. The H. Upmann 520 continues its full profile into the second third as the body increases, now well into the full category, and the strength has picked up to the northern ranges of medium-full. Flavor is still dominated by the pepper note with cedar a secondary flavor, alongside a crisp earthiness and the burnt toastiness from the first third. I wish there was a sweetness, but there isn’t. Construction is the same: great, except for the draw, which is bad. As the final third gets going the cigar goes out. I am not entirely shocked, although I am disappointed. The flavors weren’t dramatically changing prior to the relight—some coffee hints were emerging in the nose though, but the relight at the inch and a half mark kills whatever flavor progression was hoped for. For those wondering, there was a creaminess and some citrus notes a few minutes after the relight takes place, but I wouldn’t say those are expected flavors. I always say, when Cuba gets it right, they are tough to beat. When they get it wrong, you get examples of cigars like this. Imperfect, but not beautifully imperfect. There are lots of parts of the H. Upmann 520 I enjoyed: the strength, the pepper, the great smoke production. All of those would have been great in a cigar with better construction. The lack of control of the draw made this a troubling cigar to smoke and to be quite honest, I wouldn't spend the time, nor money trying to find more examples. There are better cigars coming out of Cuba, much better.