In 1984, Bernard H. Grobet started The Griffin’s line of cigars, which was named after his nightclub in Switzerland. The brand became quite popular, and as a result was exported for sale in the United States in 1989. Davidoff Cigars distributed the brand for a while before eventually purchasing it in 2004.

That same year, The Griffin’s released a special blend to commemorate their 20th Anniversary as a brand. Called The Griffin’s XX Special Release, it was a 5 1/4 x 52 Robusto that had only 3,000 boxes of 10 released and of those, only 1,000 boxes which were sold in the U.S. Every year since, The Griffin’s has released another cigar, each incorporating a Roman numeral in the name coinciding with the year of the anniversary.

For the 2013 release, The Griffin’s changed quite a few things. First, the Roman numeral was dropped for the first time, in favor of a one word name. Second, two different blends are included in the same box. Third, the release is tied to a specific theme, in this case a blackjackesque theme that everything in the box adheres to. Lastly, this is the first time that a 21 count box has been used in the series.

We posted the press release with all of the info on the newest The Griffin’s cigars back in June:

June 17, 2013 (Basel, Switzerland) — The new Griffin’s 2013 “Casino” Special Edition will attract enthusiastic gamblers and aficionados alike, united in their desire to be surprised by exceptional tobacco blends. With this innovative new product, both are lucky enough to win before they even start playing.

The new Griffin’s aromatic 2013 “Casino” Special Edition allies 17 “Casino” with four “Joker” cigars in the Robusto Extra Format, with a second ring of the same name. Thus the inspiration of blackjack, a game known as “17 + 4″ in German-speaking countries, is unmistakeable: the smoker goes “all in” as the taste of the “Casino” cigar develops with immediacy and variety. The filler consists of tobacco from the Dominican Republic and the Jalapa Especial Seco from Nicaragua, providing nuances of white pepper and dark chocolate. It titillates the taste buds, with earthy, woody notes giving way to a lasting sweetness from the slightly reddish shimmer of the Ecuadorian wrapper. The final draw is lingering, smooth and creamy, rounding off the adventure perfectly. The four “Joker” cigars are rich in contrast, surprising the palate with an exciting blend of tobacco.

The packaging is specially designed so that the back of the black lacquer cigar box, when opened flat, can be used as a mini blackjack casino table. To ensure that the thrill of the game can run its course unimpeded, Griffin’s has included blackjack cards, chips and dice inside the lid.

With the two different blends in 2013, The Griffin’s Special Release series now has 11 different cigars in it. They are:

The boxes for the this year’s special edition are painted on both sides so that when it is laid flat, it can be used with the included cards, chips and dice as a sort of blackjack table. The box looks like this: 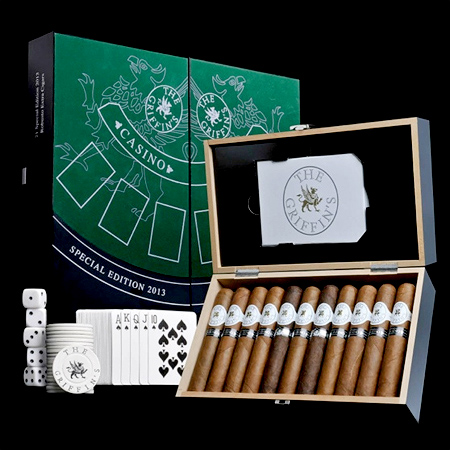 In addition, each box of  The Griffin’s 2013 Casino Special Edition includes two different blends: 17 of the Casino blend and four of the Joker blend. The two together look like this: 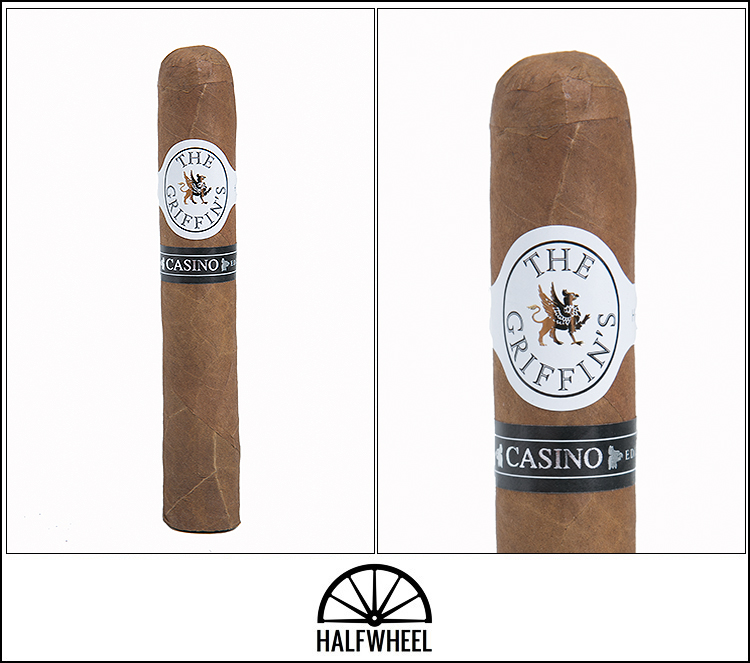 The Griffin’s 2013 Casino Special Edition is covered in a light cinnamon brown wrapper that is smooth to the touch, and with not obvious veins. There is no oil present and it is just a bit spongy when squeezed, although well within normal limits. Aroma from the wrapper is sweet chocolate, earth, nutmeg and slight pepper.

The first third of the The Griffin’s 2013 Casino Special Edition starts off cedar, creamy peanuts, cinnamon and milk chocolate. A great distinct maple sweetness comes and goes throughout the first third, only getting stronger as the cigar progresses. The white pepper on the retrohale is fairly strong at first, but recedes a bit as the first third winds down. Both the burn and draw are excellent, with the burn being razor sharp. The smoke production is well above average, and the overall strength ends the first third halfway between mild and medium. 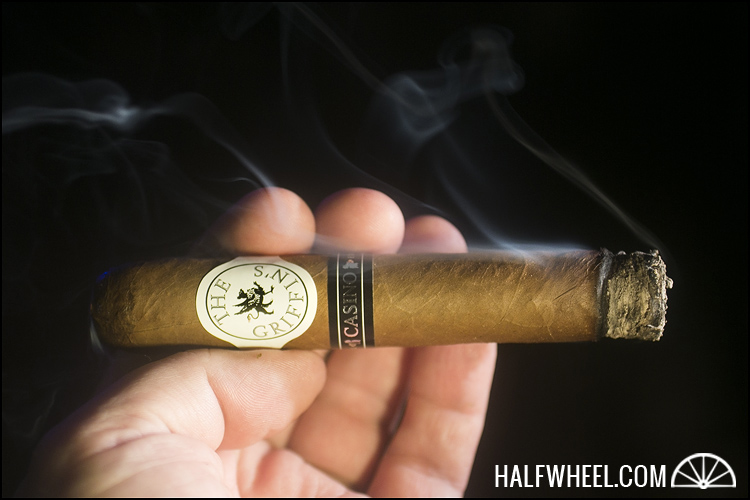 There is an interesting bread-like popcorn note that slips into the second third, strongest near the halfway point. Other notes stay consistent, with creamy nuts and cedar leading the way. The maple sweetness from the first third is still quite noticeable, but it shifts to more of a background note by the end of the second third and the white pepper on the retrohale continues to positively impact the profile. Overall construction remains wonderful, and the smoke production shows no signs of letting up anytime soon. 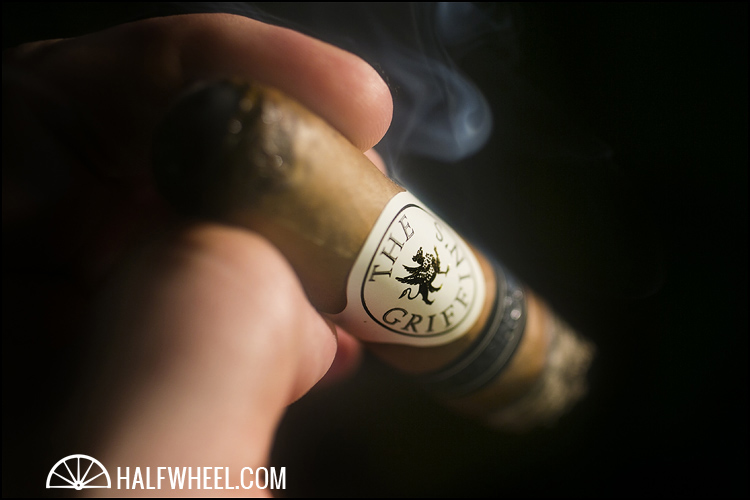 The final third of The Griffin’s 2013 Casino Special Edition shifts profiles again, with a great floral flavor replacing the popcorn note from the second third. Milk chocolate, cedar, nuts, cinnamon and leather notes all flit in and out until the end of the cigar, while the white pepper on the retrohale actually seems to increase as well. The maple sweetness that has been so prevalent grows faint as the last third progresses, and the smoke production seems to ebb as well. Construction-wise, nothing changes, and that is a very good thing. The overall strength barely moves from the first third, and ends the cigar below the medium mark. I have not smoked that many The Griffin's releases over the years, and as such did not go into this cigar with any preconceived notions. I have to say,  it easily surpassed my expectations. Nicely balanced, excellently constructed, and with a profile that is surprisingly complex, The Griffin's 2013 Casino Special Edition is a wonderful example of a milder blend that is full of flavor. A great cigar in the morning or as your first cigar of the day.