While George Rico and Gran Habano may be best known for large production and generally large ring gauge cigars, the Miami-based manufacturer has also made small-batch cigars a steady part of the company’s portfolio. In the spring of 2012, Rico added a new cigar called the S.T.K. Miami Barracuda, a cigar limited to just 2,000 cigars made at the company’s recently opened Miami factory, with an Ecuadorian habano wrapper over Nicaraguan binder and filler.

The line added a corona gorda as a store exclusive in June 2012, but since then it has largely been out of the spotlight. That was until June 2014, when Gran Habano announced that the Barracuda would be coming back in a maduro version.

For the Barracuda Maduro, Rico went with an all-Nicaraguan ligero filler with a Nicaraguan binder, both from undisclosed regions of the country, while the wrapper is a Pennsylvania broadleaf maduro.

The release date of this cigar still has yet to be finalized, as the most recent update had the end of October as a target but was subject to change due to the production of the bands. The company has said that the Barracuda Maduro will wear a secondary band, though the samples used for this review did not feature it. While I know this is a maduro wrapper, there’s nothing either explicit or implicit that tells me so; the band is similar to the one on the original release, though it lacks the iconic barracuda, while the toothy and veiny wrapper has some dark spots but isn’t so uniformly dark as to suggest what most might think of when they hear the term maduro. The thick and velvety wrapper is certainly a strong hint as to the origin of the top leaf, with the veins still fairly pronounced at certain points but little in the way of oils or tooth. The nipple cap gives the cigar a bit more stature than its five inches would otherwise, while the roll quality looks clean thanks to flat seams and a clean cap. There’s a little bit of give to the cigar, not enough to be concerned about short of for one spot near the midpoint. With the exception of the crookedly-applied band, it’s a solid presentation. The foot delivers aromas of brown sugar, cardboard and touches of some mild baking spices, earth and smoke, but little in the way of pepper. The cold draw is a little less flavor-forward, offering a very mild wheat note that skews toward the cardboard note found on the foot. Air flow is well-tuned, offering a touch of resistance but no obstructions.

The first puffs nearly exactly mimic what was found on the pre-light aroma, with the brown sugar aroma being picked up in the nose but lacking sweetness on the tongue, while the baking spices warm up and come alive along with a touch of pepper. The first retrohale is very mild though, smooth to the point of being almost nondescript and offering the opportunity to take about as big of a retrohale as any cigar can provide. The Barracuda Maduro shifts fairly quickly, picking up notes of white pepper and chalk to develop more character, but stays on the leash as far as strength through most of the first third. The ash holds on well, while the burn line remains sharp and even. An earthy character starts to subtly step in as the Barracuda Maduro heads into its second third. 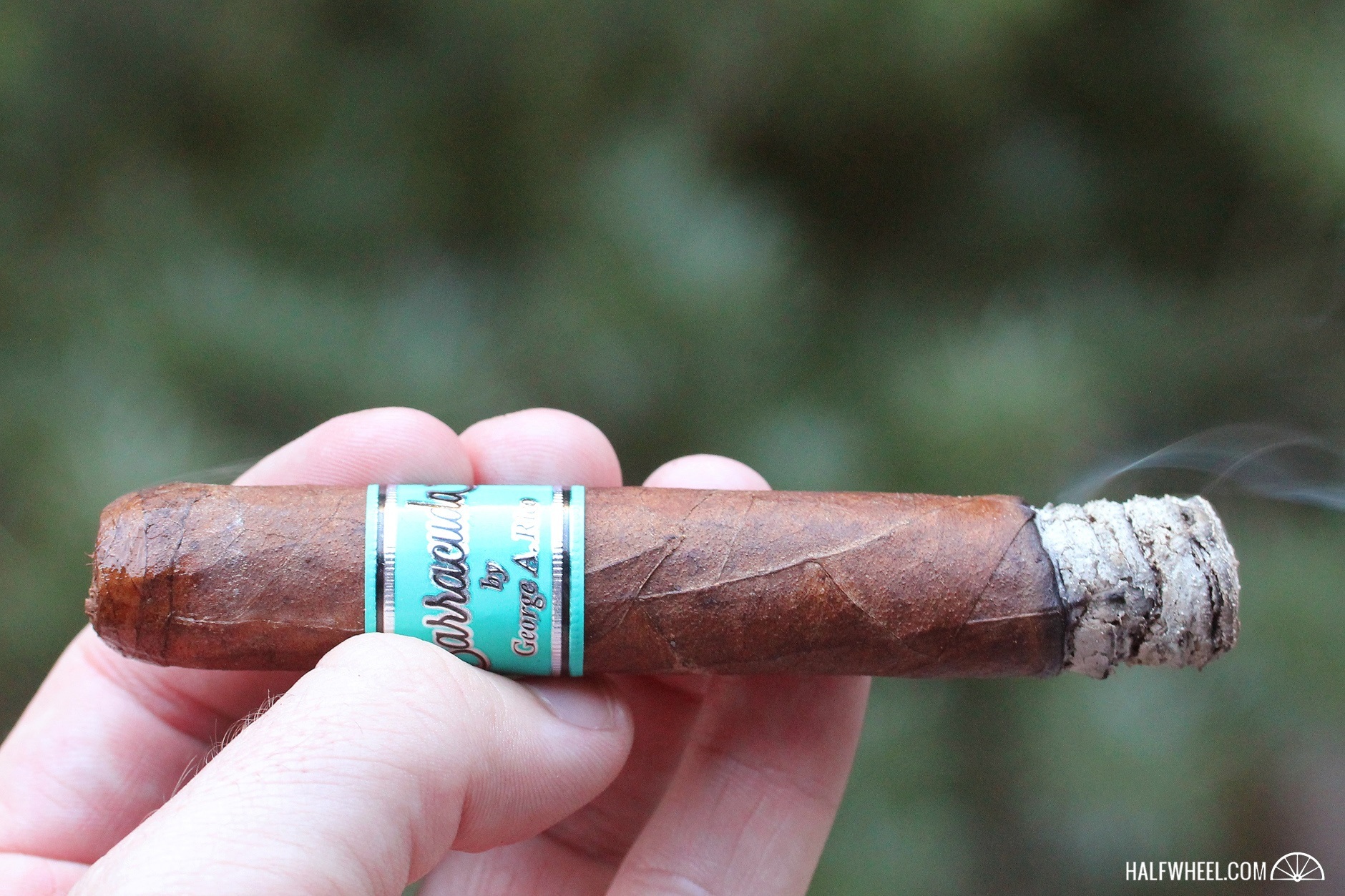 A curve in the flavor path takes the Barracuda Maduro into its middle portion, with the baking spices found earlier are now gone and tons of terroir comes out through complex and hard to place minerality and soil, turning it into a robust and somewhat rougher smoke, yet at the same time it maintains an inherent smoothness without a single bit of harshness. Subtle touches of sourness creep in here, and make it a more challenging smoke to process, but the steady flavor progression offers hope that it will be fleeting, and it indeed is. There are touches of Sumatra coffee beans that start to emerge and end up becoming the lead note after the midway point, as the minerality subsides a bit in favor of more intense earth, though it isn’t overbearing. In addition, there’s hints of charred wood that come in and furthers the development of the Barracuda Maduro as a robust cigar. Technical performance remains flawless with nothing to complain about: solid ash, a sharp and even burn line and no need to fire up the lighter. Much of the minerality and complexity in the second third has departed by the time the final third is burning in earnest. Chalk and white pepper are now the main players, another shift in the flavor that has taken the cigar to a much different place than it was when first lit but doesn’t throw it off-track at all; if anything it’s a sign of a well thought out progression. The tongue gets much more of a sharp tingle than it has had so far due to the aforementioned lead flavors, and it’s a tingle that lingers for a while even while the cigar is at rest. Retrohales have also progressed to a middle ground where they offer a good bit of white pepper tingle that forces a pause in each exhale but is also mild enough to encourage more of them. Heat becomes a factor at the very end of the cigar, intensifying the dry, peppery tingle on the tongue, though slowing the rate of puffing helps abate any ill effects. When cool, the smoke is as smooth as it has been the entire way. To put it bluntly, the S.T.K. Miami Barracuda Maduro Robusto is a fantastic journey of flavor packed into a fairly compact vitola that takes the senses on an incredibly enjoyable ride, especially the first time around. It never loses its balance, staying on the rails but bringing in some palate-challenging curves. After one, it screams for another one, which is its biggest--and really only--downfall. I found myself trying to anticipate the twists and turns that the cigar offers, which takes a good bit of the adventure out of the cigar. Find these, strap yourself in and enjoy the ride.