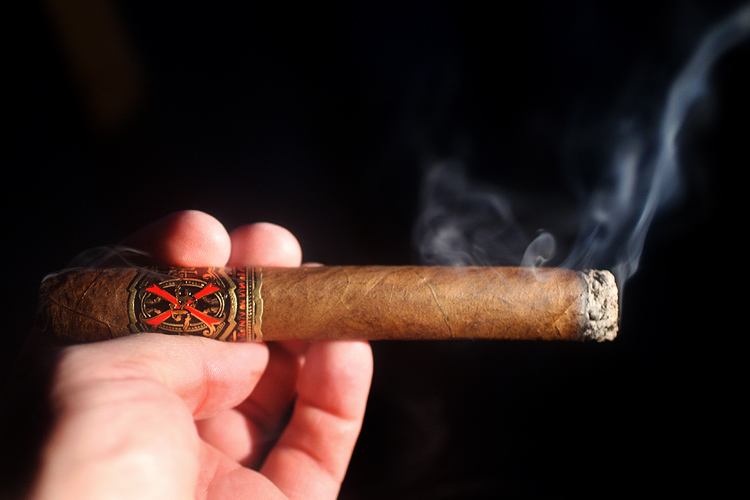 First mentioned and shown off in 2003, the Fuente Fuente OpusX ForbiddenX Cigar in the Bottle was not actually released for sale until 2007, when 5,000 bottles were sold to various retailers across the country. The unique hand blown bottle is not only filled with Grand Pommier XS Calvados—apple brandy made from 100 different apple versions at the Magliore Calvados distillery in Normandy, France—but also includes a rare OpusX ForbiddenX hermetically-sealed within a glass chamber inside.

The Fuente Fuente ForbiddenX that is enclosed in the bottle is a special creation, with seven different types to tobacco used, and binder and filler tobacco that is cured in Calvados barrels used for aging the Calvados Grand Pommier instead of the rum barrels that the normal OpusX tobacco is cured in. In addition, the tobacco for the cigar is taken from the middle primings, which results in a sweeter profile then a regular OpusX blend.

According to Andrew Welch of GarTrader:

Note the special “Forbidden X” band. “Forbidden X” is a new band, and a new broad moniker that applies to non-regular release Opus X cigars; the blend of various Forbidden X cigars may be different.

This cigar has a sun grown corojo wrapper, grown at Chateau d’Fuente; the wrapper is from the same plant (but from the top pruning) as the Ashton ESGs. This is the exact same cigar as the black-banded Forbidden X cigar that came in the 2005 Platinum DVD set. One of these cigars is also included in the “Journey to Chateau de la Fuente” 2005 gift set from Prometheus (5,000 produced). The cigars in the Prometheus gift sets include an extra “2005” band on them.

The term Calvados designates not only the Norman province bearing its name but also the heavenly distilled spirit flowing from its rich soil. Since 1821, the cellar masters at the legendary Pere Magloire Calvados Distillery have been cultivating hundreds of varieties of trees bearing succulent apples from red to green and every spectrum in between.

Each year, the fruit is hand selected at different intervals of the growing season to produce a variety of flavors ranging from sour to sweet. Once harvested, the apples are cleaned in purified water, then crushed to extract their delicate juices.

Unlike most spirits, which are often distilled with additives, Calvados is made pure using a special double distillation process. The result is pure ecstasy, as the spirit is aged in French oak casks and then blended to create a bouquet of heavenly aromas.

For years, the French have enjoyed not only the exquisite flavor but also the unique digestive properties and effect on the palate making Calvados the ideal accompaniment before, during and after fine meals, chocolates and desserts.

Grand Pommier, French for great apple tree, represents an extra special reserve, the pinnacle of harvesting, aging, and blending excellence that has won Pere Magloire the distinction of being the world’s finest Calvados distillery.

As quoted above, according to GarTrader, this exact same cigar with the exact same blend was apparently also included in two other releases: the 2004 Platinum edition of the Fuente/Prometheus DVD set and the “Journey to Chateau de la Fuente” 2005 gift set sold by Prometheus. However, both sets list the official size of the cigars as 6 1/4 x 48, not 6 x 48. Then there is this article in Cigar Aficionado, which refutes that, and says that the ForbiddenX in the Cigar in the Bottle is totally unique and not the same as is in the 2004 set.

Here is what the ForbiddenX Cigar in a Bottle looks like: 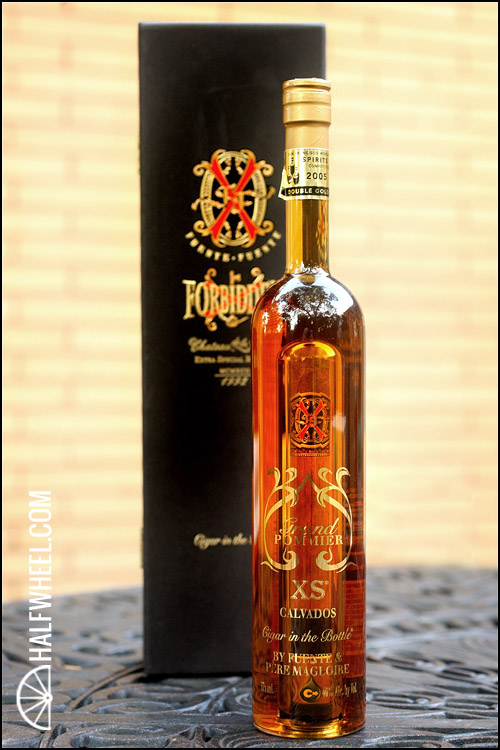 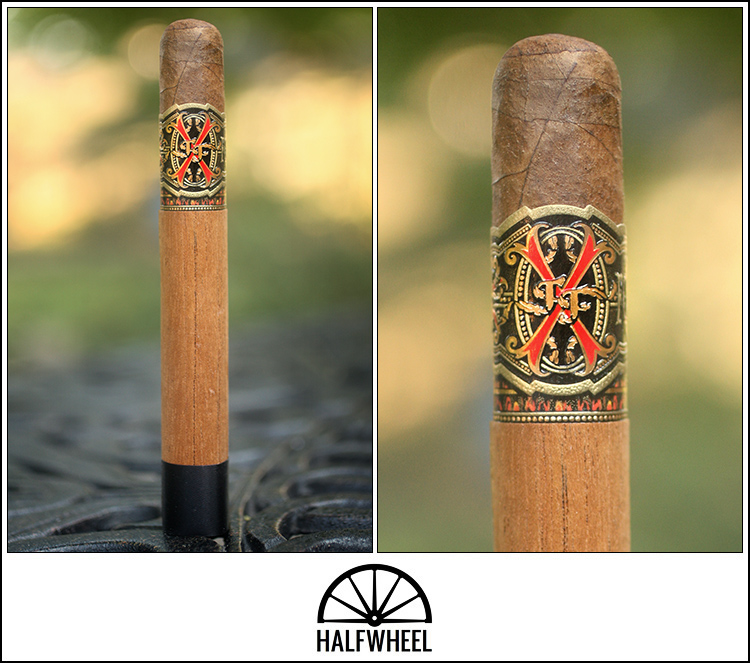 The wrapper is a light cinnamon brown that looks aged and has some tooth to it when you run your finger down it. There are almost no veins present at all and the cigar is rock hard when squeezed. The wrapper has no oil on it, feeling almost like parchment, and smells faintly of cedar and chocolate.

The first third of the OpusX ForbiddenX Cigar in the Bottle starts out very harsh with nothing but bitterness on the palate. However, that dies down after about 15 puffs and the profile begins to get a bit better with flavors of aged wood, creamy leather, chocolate and just a little amount of spice on the tongue. There is a noticeable bitterness underneath the flavors left over from the initial light up that is strong enough to impact the flavors in a negative way and does so throughout the first third. The draw is a bit open through the first third, while the burn is extremely erratic for about 15 puffs, then evens out. Smoke production is well above average and the strength starts out slow ending the first third at a mild medium. 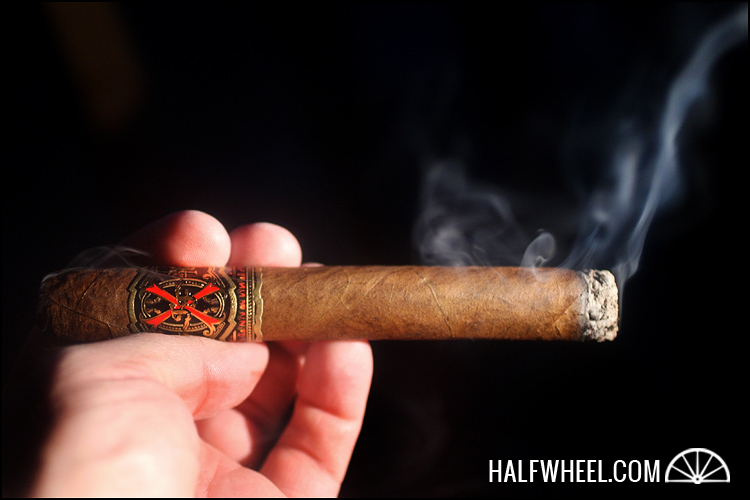 It’s a much creamier second third with some of the same flavors of aged oak and leather, along with added notes of floral and white pepper. Thankfully, the bitterness from the first third are both long gone and there is a wonderful milk chocolate sweetness that has come to the forefront as well, and really helps add a bit of complexity. The draw has tightened up nicely, but the burn continues to wander quite a bit, forcing me to touch it up a few times, which is annoying. Another major change is the strength, which surprises me by ramping up quickly to a very strong medium by the end of the second third and seems to only be getting stronger. Smoke production continues to impress me as well, white and billowy. 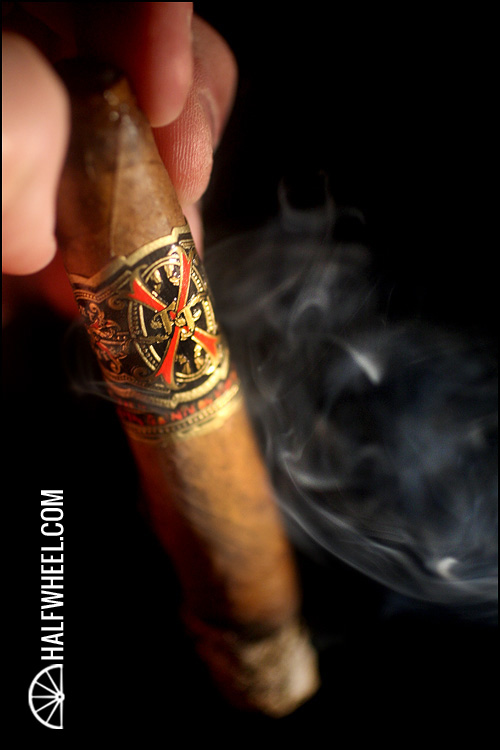 The final third of the Fuente Fuente OpusX ForbiddenX Cigar in the Bottle sees a shift in the sweetness that is present, from a milk chocolate note to more of a maple sugar sweetness along with another major increase in strength well into the full category. The other flavors in the profile remain essentially the same: leather, aged oak and even a bit of coffee that ebbs in and out. Construction-wise, the draw has a wonderful resistance, while the burn continues to be a problem, albeit one that I can deal with using my lighter. I am able to smoke the cigar until just under an inch down before I have to quit. 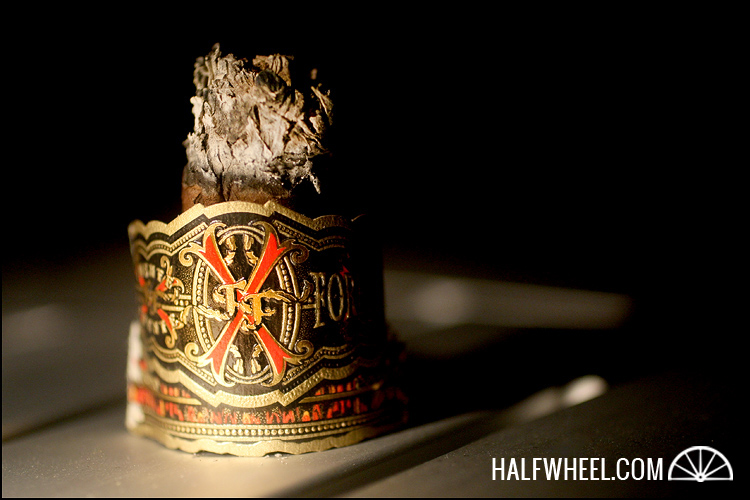 As I was taking the first 10-15 puffs of this cigar, I was thinking that I had the review down pat: the cool bottle humidification system had kept the cigar looking good, but tasting poor Well, I am glad I kept smoking, as the profile not only got better, but actually got much better before the end of the cigar. The interesting thing to me is that the profile is quite a bit different from most OpusX cigars—likely due in large part to the different profile and aging of the tobacco as detailed above—quite a bit sweeter, smoother and with less pepper on the retrohale. The burn was pretty awful for the entire smoke, but the draw was excellent after the first third and the wrapper did not split too badly even after a chunk was taken out by the cedar wrap. All in all, a good cigar with a fairly unique profile, but the extremely harsh first third and horrible burn almost ruined what would have been a great experience with a rare cigar. If the Cigar in the Bottle's profile had stayed consistent through the entire smoke, it would have been a much higher score.