Rare is a subjective word. In the cigar industry, it doesn’t get a whole lot more subjective than when discussing products from Tabacalera A. Fuente y Cia. There are the quarterly releases: Añejos and Fuente Fuente OpusXs; the annual releases: Between the Lines, Añejo Shark, Work of Art Maduro; single store releases: Casa Fuente, Destino Siglo Al-13; the Prometheus Releases: Don Carlos Edicion Anniversarios; one-time releases: Original 858 sun growns; and finally, there’s the Cigar Family Charitable Foundation (CFCF) releases. The latter consists of sizes of OpusX that most have never heard of, let alone seen; and it’s near countless. Most would have no clue what an Elliptical X, Hummer or Little Ritchie is; but then again when I told most I was reviewing an OpusX Lancero, they’d reply, “don’t you mean Petit Lancero?” The answer is no, this is a review of the Fuente Fuente OpusX Phantom. 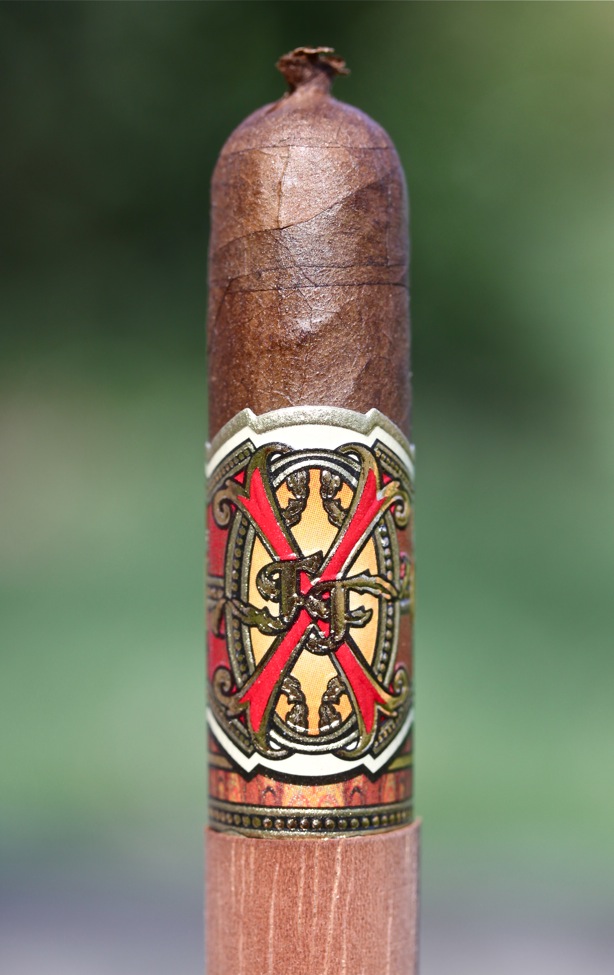 Today’s Smoke Fuente has only made five Lanceros in the last decade or so. All of them have been 7 1/2 x 41, a bit thicker than the traditional El Laguito No. 1 size. The five Lanceros have been:

I know, there’s the Lost City, Forbidden X, etc. Wait for it… they’re just a regular OpusX Phantom rebanded. For the Lost City, it’s one of two vitolas that isn’t actually the summer tobacco that was used in Andy Garcia’s film. The Forbidden X is really just another OpusX anyways, no matter what the size. I’m not sure if anyone knows the exact number of Opus Phantoms made, but I have to imagine the number is somewhere around 50,000, with the first releases starting in 2002. This particular cigar is from the Forbidden X DVD release, which was released in 2002. I smoked two others in the same week, both younger.

If there is something that the Fuentes are very good at, it’s making Opus wrappers look consistent. The Rosado wrapper has a solid fill with great reds. As one would expect, no imperfections. To the touch it’s a bit tight with above average packing. Even after over eight years of being packed in cedar, the wrapper is relatively mild with cedar, nuts and a bit of grassiness. Underneath the red strip of velvet on the foot is a tasty medium mixture of nuts, raisins and a bit of sugar. 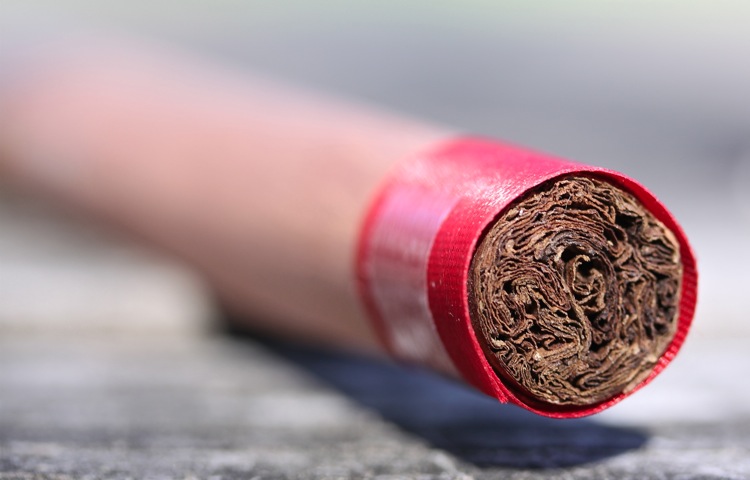 Lighting Another clean cut via the Xikar XV. It seems on some OpusX Phantoms, the aroma from the head featured a lot more spice, but this one was a very mature sweet raisin, red wine and white pepper. Draw is a bit tight, but provides a great flavor of red wine, orange peel, raisins and black pepper. Like most Opuses, the Phantom provides a great aroma of black pepper, burnt raisin and a bit of underlying sweetness. The first puff? Not as great. It starts with a spicy and sweet cedar that transitions into a deep nut and black pepper flavor. It’s short, medium-full and not impressive. 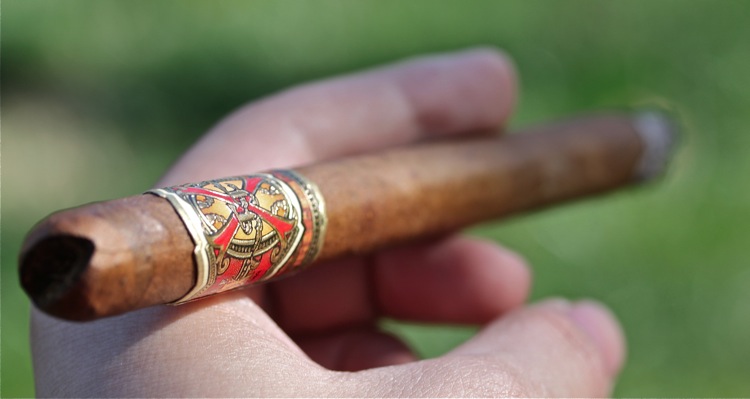 First Third Classic Fuente pepper, this time in the form of black pepper at the back of the throat. The rich cedar note, syrup and earth make up the rest of the medium flavor profile. Finish is a refined pepper, cedar and herbs; still relatively short. From start to finish, no matter what the age — OpusX Lancero’s seem to have a draw that is just a tad bit tight. The Winston air gets a beautiful cedar aroma from an average smoke output from the Phantom.

Second Third A toastiness settles across the flavor profile of the middle of the OpusX. The rest of the core reshuffles itself, a bit more balanced between the cedar and pepper. Flavor of the Chateau de la Fuente creation is still medium, which is a bid disappointing. The light ash occasionally holds for a few inches, but most the time seems to get knocked off in an inch. Construction remains in the same place, which is acceptable, even if I’d like a bit more smoke. 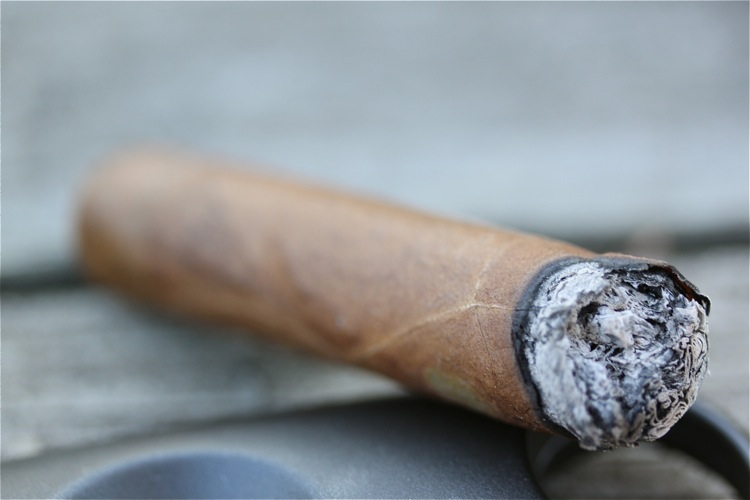 Final Third At last, the flavors break through. That cedar and black pepper are still the dominant forces, but a sweet raisin and sugar note begins to emerge. Flavors are smooth and direct, although not as complex as some of the Opuses of the past. Construction remains flawless until the end, with smoke production even increasing at the end. Strength of the Lancero picks up as well, now well into the full range.

For the Novice If it has an Opus band, it’s not for a new smoker. With most Opuses, I think buying a single or two when you first start and putting it away for three to five years sounds like a great idea. I can’t say that with this particular vitola I’d recommend it. For starters, the price-tag on these is far more than your run-of-the-mill OpusX, as it’s not readily available, nor available in a normal distribution method. But more so, of the three I smoked, the best one was the youngest, with this particular Phantom, the oldest, being by far the worse. It seems after four or so years they begin to lose something. 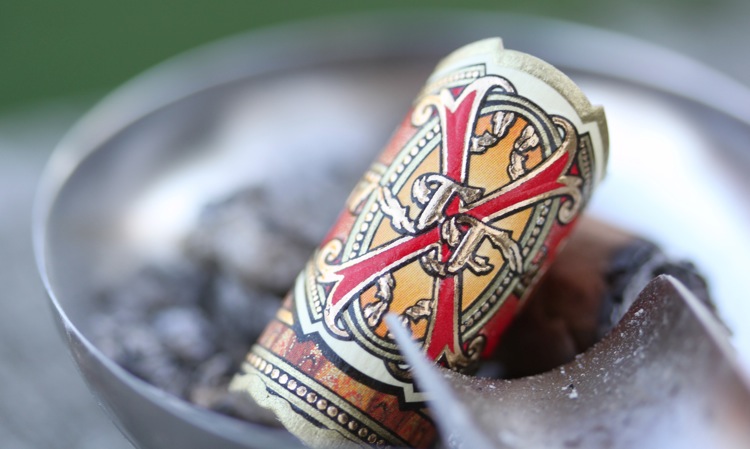 Final Third I would like to sit here and say that this is a phenomenal cigar that exceeded my expectations, and I cannot. With this much age, the reality is the cigar is far beyond its prime and a muted shell of its former self. Construction-wise, this cigar lives up to the name that is on the band. Flavor-wise? This cigar could be better, there’s no denying it. However, if you have the opportunity to pick up a single or two, likely in the Lost City form, I’d recommend it, put it down for two or three years and enjoy, you’ll have a good cigar. Those somewhat “in the know” about Opuses universally admit that they need some time, and yours truly thinks five years is about the norm for most. The Phantom, at least for me, seems like it needs less and begins to decline at a much quicker rate,

87. Not a 95 point cigar, even without the price and difficulty in finding a regular-banded Opus Phantom.