First introduced at the 2012 IPCPR show, the Foundry Tobacco Company started off as a way for General Cigar Company to show off some of its more innovative packaging and blends. While the inaugural releases took inspiration from the Steampunk era, Michael Giannini upped the ante in 2013, announcing 18 different blends at once in the newly conceived Compounds, Elements and Musings line.

As the name suggests, each of different blends is inspired by one of the elements on the Periodic Table, with packaging to match Giannini’s unique interpretation. For the most part, the actual components of each blend are not being disclosed, as Giannini wants people to smoke the cigars without any preconceived notions. While the vast majority of the blends are limited releases, Carbon and Uranium will remain in production.

The Foundry Tobacco Company website has some general information about the line:

Inspired by the periodic table, Compounds, Elements, and Musings is a study in contrasts and complexities. Here, chemical elements are represented by 18 exotic blends, each exhibited in arresting packaging. Multitudes of tobacco, handpicked from obscurity, compose the common thread among them.
Intricacy reigns. Take Plutonium, with four different blends, each in the same size, all within one box. Or H2O, with three blends applied to one size, also within the same box. Then there’s Titanium, with two different sizes together in one box. It doesn’t end there.
Just two of the blends will stay, with Carbon and Uranium. The remaining 16 blends and their outrageous presentations will be retired once their supply is depleted. The quantity of each blend is set according to the scarcity of the tobacco it contains. As unpredictable as science itself, no two blends will retire together.
As the periodic table predicts new, yet to be discovered or synthesized elements, this grouping of extremely limited blends foretells enigmatic, provocative releases to come.

There are 18 different blends under 14 different frontmarks in the Foundry Compounds, Elements & Musings line: 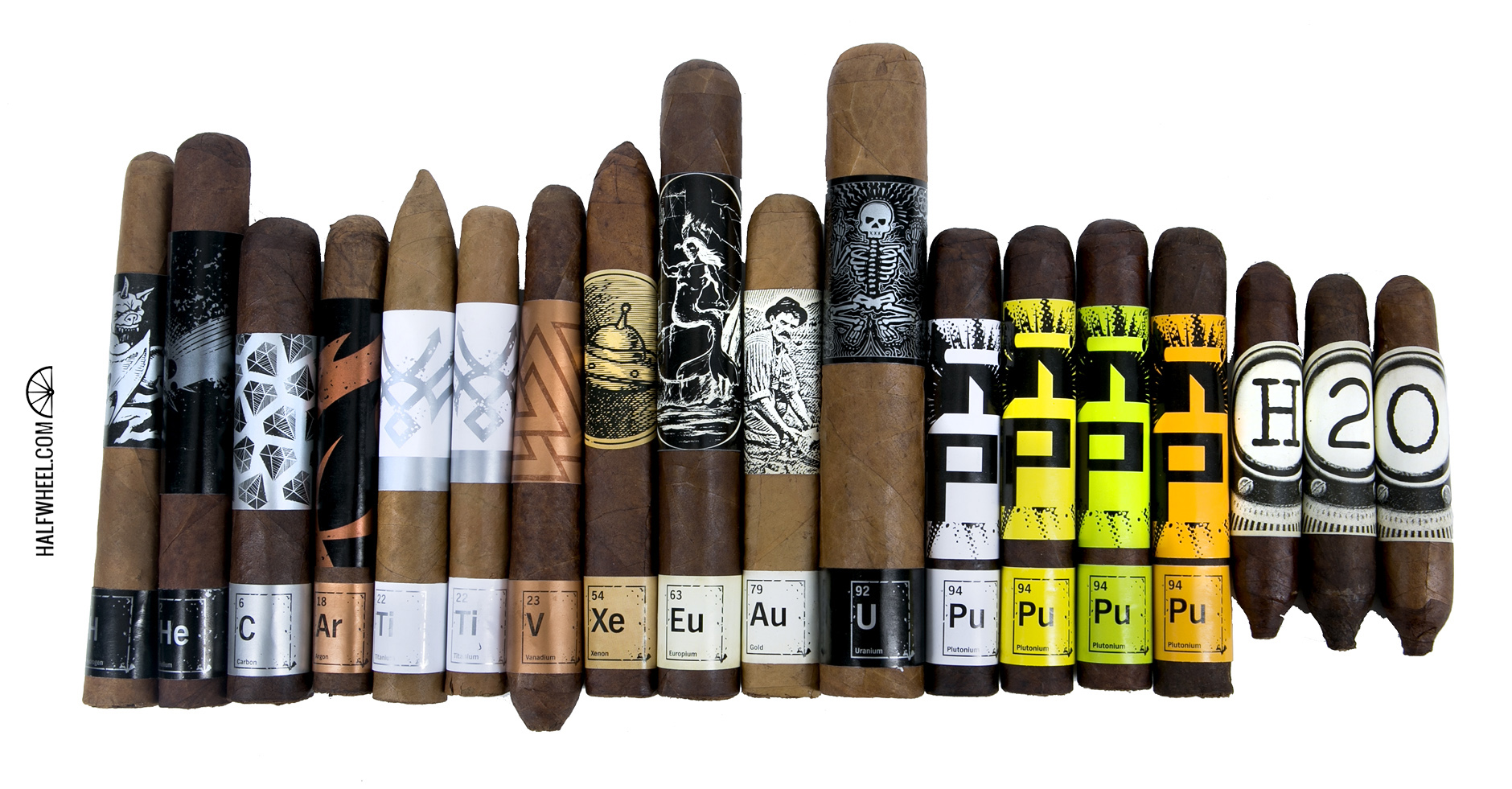 1The Titanium is sold in one box of 20. The box contains 10 cigars of each size.

2The H, 2 and O are three cigars with different wrappers sold in one box of 36. Each box contains 12 of each wrapper.

The boxes the Foundry Europium come in actually look very different than what was shown in press photos. Without the glossy exterior and clasp to close it, the boxes look less like a steamer trunk, and more like a fairly normal box with the addition of a few extra pieces on top. The first thing you notice when you see the Foundry Europium is the absolutely massive main band, then the secondary band, then the fact that it is 7 x 60 cigar. A barely seen dark espresso brown wrapper covers the cigar that glistens with oil and is fairly rough to the touch. It is extremely spongy when squeezed, almost to the point that it is distracting. Aroma from the wrapper is a combination of strong earth, leather and pepper, but not much else.

Right off the bat, the Foundry has strong flavors of leather, earth, hay and dark chocolate, along with an interesting — albeit fairly small — vanilla sweetness that comes and goes throughout the first third. There is a touch of black pepper present on the retrohale at points, but no spice at all, and the amount of smoke is not as large as I was excepting, considering the size of the cigar. I am noticing a slightly bitter finish that is a little disconcerting, and really hope it does not get stronger. Construction-wise, the draw is a bit loose for my tastes, and while the burn gives me no major issues, it is far from perfect. The overall strength is just not a factor so far, and ends the first third well below the medium mark. Unfortunately, the slight sweetness that was present in the first third of the Foundry Europium starts to dissipate fairly quickly as the second third progress, eventually disappearing altogether by the halfway point. It has been replaced by a stronger bitterness on the finish, which seems to be getting stronger as the second third continues. The core flavors have stayed the same for the most part, although all are less distinct: earth, hay, leather, dark chocolate and a little coffee every once in a while. Construction-wise, the draw is still fairly open and the burn is still a bit wavy, and the strength is still below the medium mark. 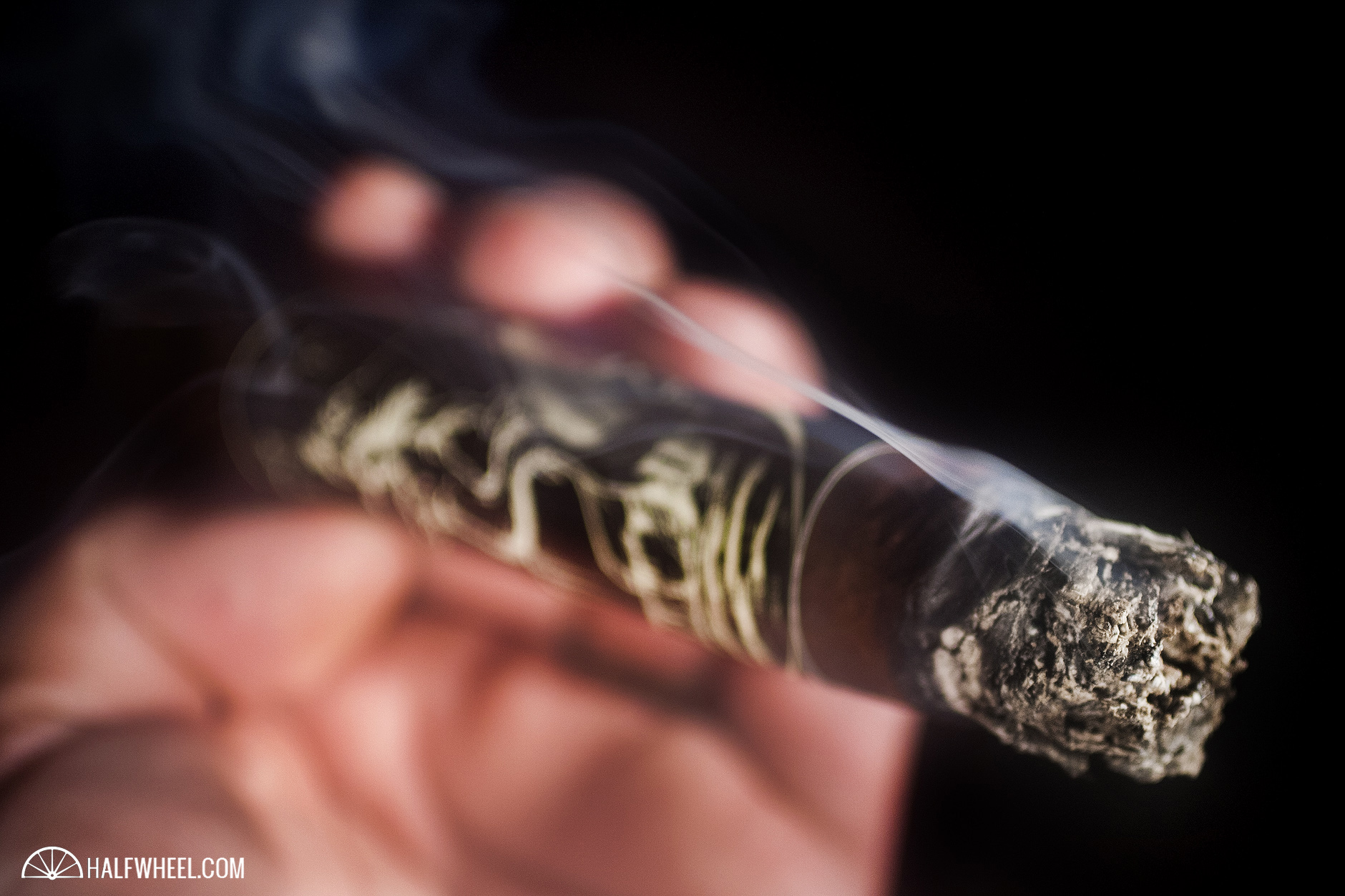 The final third of the Foundry Europium is almost a carbon copy of the second third: no sweetness, same palate wrecking bitterness on the finish, same loose draw and a burn that never comes close to evening up. The flavors remain the same as well for the most part, with earth and hay leading the way and leather and coffee bringing up the rear. One change is the smoke production, which has increased noticeably, and stays strong until the end of the smoke. The strength never quite makes it to the medium mark, but gives it the old college try, ending just short before I have to put the nub down with a little more than an inch left. Leaving aside the marketing and judging just the blend, the Foundry Europium is actually not bad for the first three inches or so, but after that, the profile totally falls apart, becoming extremely monotonous and including a bitterness on the finish that pretty much destroys any hope for enjoyment. The construction on both samples I was able to smoke was well below average, and it was just not an overly enjoyable cigar starting around the start of the second third. While I have not smoked all of the blends in the series, the Foundry Europium should not be your first choice to try.